The Week that Was in NJPW World history [August 1-5]

It’s tournament mania in NJPW right now! We’re in the midst of an eight team tournament to decide new NEVER Openweight 6-Man Tag Team Champions, and the first ever New Japan Cup USA gets started on NJPW Strong on August 7.

Of course in prior years, summer has meant G1 Climax time, and that’s the central focus of our weekly look back through the archives, with one more tournament determining a unique champion:

G1 Climax 27 represented a literal and figurative homecoming for Kota Ibushi. After time spent away from NJPW through 2016 as he broadened his horizons on the world stage, Ibushi came back to New Japan for the tournament, starting a relationship that would result in signing a lifetime contract in spring of 2019.

On August 1, the literal homecoming arrived as Ibushi wrestled in front of his hometown crowd in Kagoshima for the first time. Standing opposite him in the main event was the man Ibushi would test himself against in key matches for his next three G1 campaigns: Hiroshi Tanahashi. While The Ace was happy to see Ibushi back in NJPW, he held some reservations about Ibushi’s resolve, and dedication to the cerulean blue.

The result was a dramatic trilogy of atches. In 2018, the two men would meet in the final, as Tanahashi’s own resolve and determination resulted in coming back from injury to win the tournament. In 2019, Ibushi would score an emphatic victory over the Ace in Osaka, a match that resulted in Tanahashi saying ‘you surpassed me long ago’.

Yet it was 2017 that journey started. Ibushi held Tanahashi as one of two deities in professional wrestling along with Shinsuke Nakamura. Ibushi would never be able to beat Nakamura one on one; if he was to get a victory over Tanahashi, he would need something special. The result was the Kamigoye-literally ‘surpassing God’, a move used in anger to score victory for the first time for the Golden Star in this very match.

August 2, 1998: King of Destruction Becomes King of the Summer 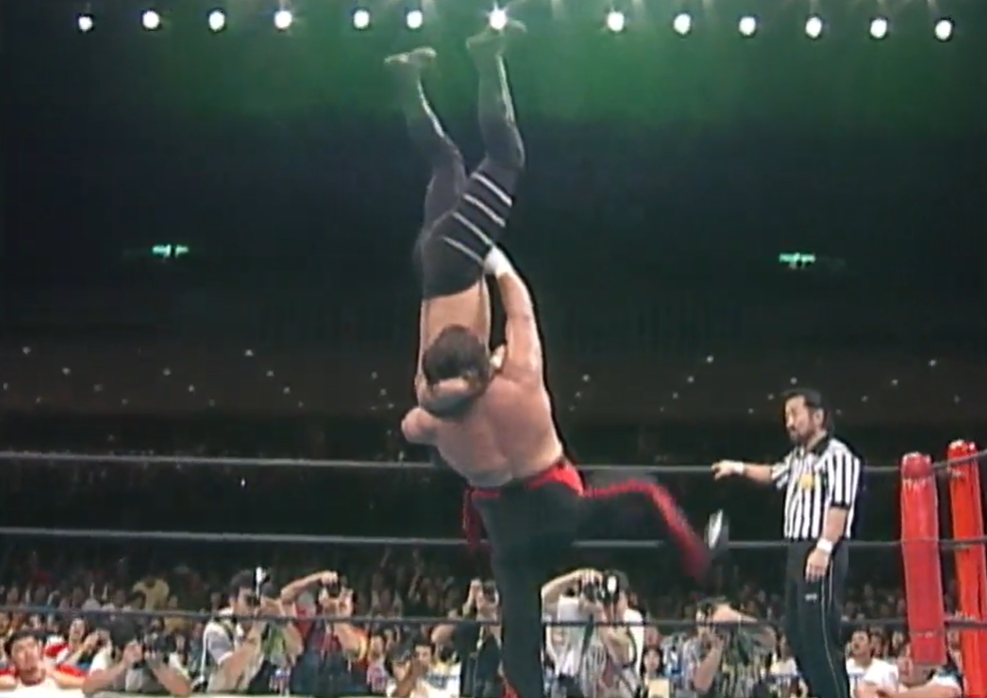 As the new generation spearheaded by the Three Musketeers of Masahiro Chono, Keiji Muto and Shinya Hashimoto rose to prominence, the G1 Climax was the ideal place for them to demonstrate that the world was theirs for the taking. The demanding summer schedule, whether in the league format that would be settled on in recent years, or in single elimination style, was perfect for showing that the younger stars had what it take to produce in gureling circumstances. Although Tatsumi Fujinami in 1993 and Riki Choshu in 1996 showed that their time was not yet done, three of the first five G1 crowns went to Masahiro Chono, and Keiji Muto and Kensuke Sasaki also joined the ranks of winners.

Still absent from the winner’s circle however, was Shinya Hashimoto. The King of Destruction had been almost impossible to separate from the IWGP Heavyweight Championship through the middle of the decade, but had yet to win his first G1 until 1998. The single elimination format for the year’s tournament meant that not even one loss was an option; to make things tough in the summer heat, the G1 took place over four consecutive days this year in Ryogoku Sumo Hall. After a quick first round stoppage victory against Tatsutoshi Goto, Hashimoto did not have an easy path at all, with the legendary toughman Genichiro Tenryu in round two and the fast rising Satoshi Kojima going down in the semi-finals mere minutes before Hashimoto had to face Kazuo Yamazaki.

An original NJPW Dojo product that defected to UWF and UWFI before returning to the cerulean, Yamazaki re-earned the respect of NJPW fans with a phenomenal G1 run that saw him past nWo Japan’s Big Titan, Kensuke Sasaki and then, shockingly in the semi-finals, Masahiro Chono. It felt that Yamazaki, a dark horse pick, could beat anyone, Hashimoto included, and he certainly gave the king of Destruction all Hashimoto could handle. 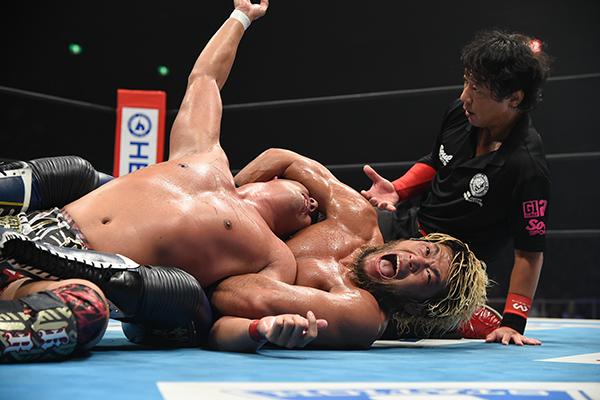 While hopes were high going into the G1 Climax for SANADA, for the most part it wasn’t Cold Skull’s summer. After a good start against Zack Sabre Junior in Dallas, SANADA had to take four tough losses, including against his then tag partner EVIL. Already with no chance of making it to the G1 final and subsequent chance at a title opportunity in the Tokyo Dome, SANADA’s one bright hope was the chance to beat his rival, Kazuchika Okada.

It was Okada himself that had named SANADA his ‘rival’ back in the spring, in a turn of phrase that certainly seemed like damning with faint praise; however hard SANADA had pushed the IWGP Heavyweight Champion over the years, the record still stood resolute at 6-0 Okada. SANADA needed more than anything to turn the tide of his summer, and redress the record in at least a small way with the Rainmaker.

As time ticked toward the 30 minute time limit, it almost seemed as if the most frustrating finish possible would be the end result; a draw would be the epitome of the ‘not quite good enough’ tag that had lingered around SANADA by the doubters throughout the summer. Instead though, the Skull End complete with hooks would stun Okada long enough for a pair of Moonsauts, and with just 13 seconds left to go in the match, the closest G1 finish in tournament history. 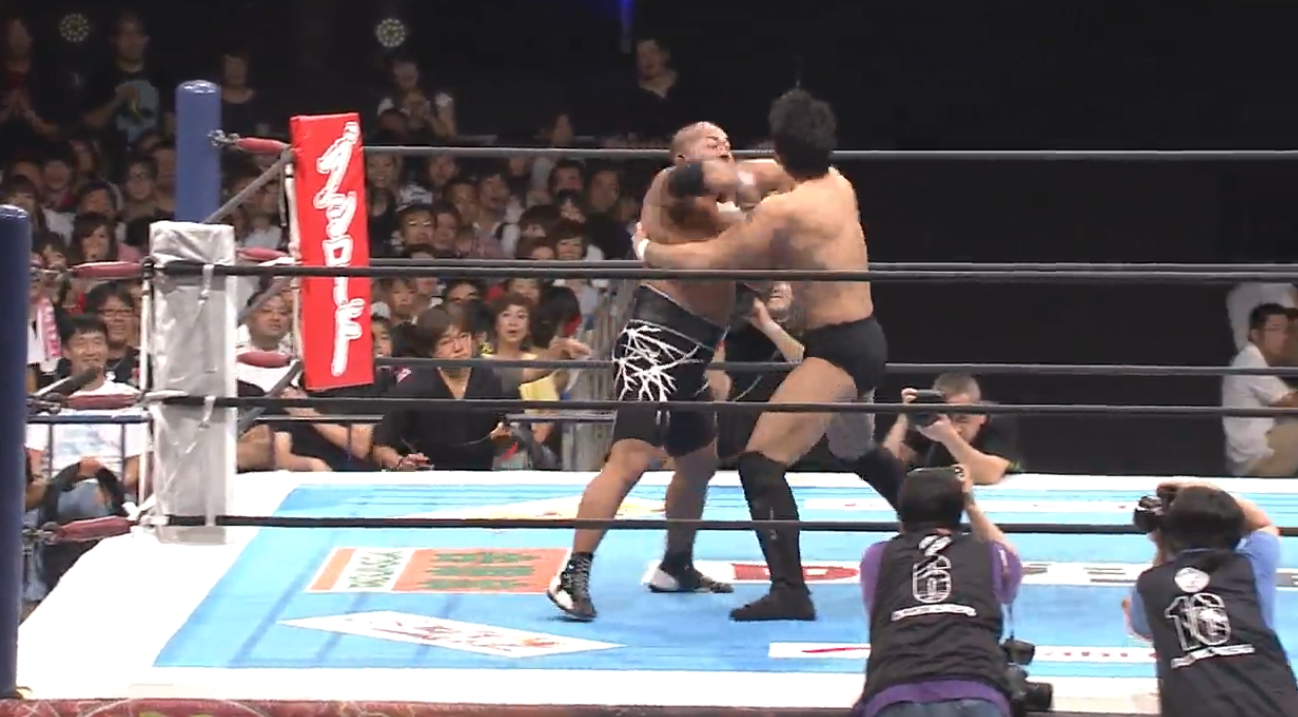 Tomohiro Ishii and Katsuyori Shibata headed into G1 Climax 23 with much to prove. Ishii, a 17 year pro, was entering his first ever G1, while Shibata was in his first tournament in nine years. Ishii had arrived in NJPW a few months after Shibata had left the promotion in 2005, but initially as a junior heavyweight. Although he would enter the New Japan Cup and World Tag league, he wasn’t included in G1 conversation until a strong showing in 2012’s NEVER Openweight Championship Tournament saw him reach the semi-finals before losing to eventual winner Masato Tanaka.

Three months earlier, Shibata had made his shocking return to NJPW. Choosing that year’s G1 final to stand in-ring and announce to the world ‘I’m here to pick a fight,’ it seemed only natural that he would be in contention in the 2013 tournament. Yet many would view Shibata as an outsider for months to come. Did Shibata or Ishii truly belong in the G1 ranks, and the upper echelons of the NJPW roster? Both men were determined to prove their worth, and the results were intense and brutal. 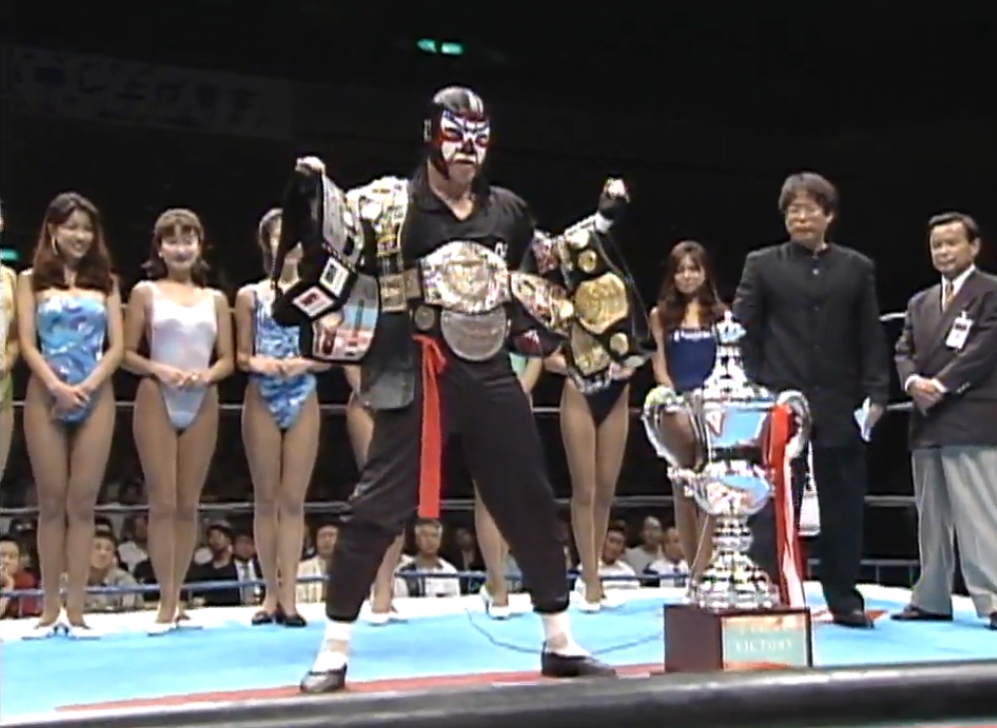 It isn’t all heavyweight tournament action that dominates the summer. In 1996, the G1 Climax coincided with the culmination of a tournament between eight champions, with all their titles on the line. It was, indeed ‘All or Nothing’ in the J-Crown.

Earlier in June, the Sky Diving- J saw a unique event consisting entirely of junior heavyweight championship matches from promotions all over the world. The event led to a unique proposal from Jyushin Thunder Liger: what if all those titles were contested in one tournament with the winner walking away with all the gold? So it was that the J-Crown was created, consisting of:

The single elimination tournament boiled down to one huge matchup. Sasuke added the WWF, WWA and NWA Junior titles to his collection on his way to Ryogoku, while on the other side of the bracket, Ultimo Dragon picked up the British Cruiser, World Welter and UWA World Junior Heavyweight Championships.

It was all to play for, and in only their second ever meeting, Sasuke and Ultimo put on a match for the ages. In a dazzling display, both pulled out all the stops, including a terrifying dive from Sasuke to the floor, a move that saw Sasuke injured but able to continue to seize victory, and become the most decorated junior heavyweight of all time.