Kota Ibushi continues to solve the world’s problems in his own unique way. 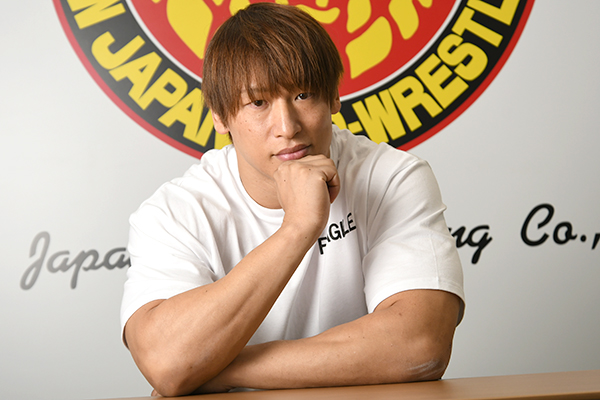 Kota Ibushi always brings a unique approach to everything he does in NJPW, so it figures there would be curiosity around the Golden Star dealing out life advice. Yet he was such a hit that we brought NJPW’s apparent new agony uncle back for a second round!

I have friends, but I don’t have anybody I feel especially close to. I like everyone just about the same. I’ve never had a really close friend, or dated anybody really special. But I’d like to think I could be somebody else’s special person. How do I deal with that conflict?

Ibushi: I don’t think that’s a conflict at all, firstly. I’ve felt the same way myself in the past, and I don’t think that’s anything to worry about. You’ll be special to someone in your own way, just organically. If you really want to make a special relationship with someone, well that might take some effort, but trust me fro experience, you don’t have to try to become a special person to someone else, it’ll just come naturally.

I’m having a really tough time looking for a job, and it’s getting me down. I’ve failed interview after interview and it’s starting to make me feel I don’t have a place in society. How do I get around that negative attitude?

Ibushi: Last time I talked about doing the opposite when I’m in a negative cycle. I think in this case, if you’re having no luck with the job search, I’d think about stopping looking for a while.

Ibushi: Really. Like if there’s something within you that wants to go into a certain line of work, if you give up pursuing that and try something different, you’ll find that passion in you will bring you to that dream job faster than you might think. Sometimes the roundabout way ends up being the fastest way.

–So you’d say it’s better to take a break from the job searching.

Ibushi: Yeah, but not half assed either. Like, take three months out and completely reset. Maybe pick up part time jobs or temp work to keep you going, and you might chance on something that you actually really enjoy and want to pursue that way, too. Take a break and the right job will come along.

I’m a 19 year old guy and quite frankly, I’m scared of girls. I can’t make eye contact with girls and when I have to speak to them, I can’t make words come out of my mouth in any coherent way. Can you help me speak a little better?

Ibushi: I had a little difficulty making eye contact with people when I spoke to them, and I think that went hand in hand with a lack of confidence. So in my case, I found that if I found something that I excelled in and did that, then it would help me gain confidence in the rest of my life as well. That’s why training became really important to me mentally as well as physically; it’s something I know I’m better at than everyone else.

–So it’s not a specific confidence with women, but all around life?

Ibushi: Right. I think everybody is a little different, and this guy might not be great at working out, but if he can find something that he can produce results in then it’ll work wonders.

–By the way, do you have any little tricks when it comes to small talk?

Ibushi: Hmm. I think rather than talk about yourself, if you try and take an interest in the other person and go to meet them halfway then it becomes easier to talk. Mind you, it doesn’t matter what gender they are, everybody’s human. So if you can talk to anyone you can talk to girls too! 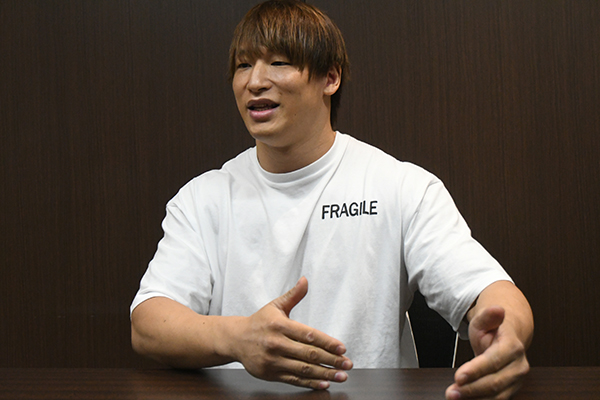 I’ve been married for 20 years and have three kids. When we first got married, I really loved my husband, but lately it seems we have such completely different points of view on so many things, and even though we don’t fight per se, I just find myself getting more and more frustrated with him. Can I fix my marriage?

Ibushi: Well, I think if you’ve been together for 20 years, you should know each other quite well. You’ll know each other’s habits and what irritates them, and what makes them happy too. If you can try and bring as much positivity as possible and bring that happiness to the relationship, it’ll come back for you in return.

Ibushi: I think it will. I think it’ll certainly help him realise to act in such a way that it won’t annoy you, but make you happy as well.

I think Tanahashi is my god. But when I talk about him that way, other people think I’m weird. What should I do?

Ibushi: If it’s the way you feel, I think there’s no problem with it. I feel that strongly that I would want to use that word even if other people thought it was weird.

–You had your issues in recent weeks. Do you still think about Tanahashi the same way?

Ibushi: Tanahashi will always be a cut above. He always is a god. But if I want to become the success that I plan to be, then I still need to surpass him in every way. I have surpassed him, I have beaten him, but not completely, not yet. Even if I do though, Tanahashi’s position wouldn’t change. He’ll always be my god, and I’ll always use that word in relation to him.

My wife loves basketball but she keeps getting hurt. Her knee is in bad shape, but she won’t quit. She’s a big fan of yours and she keeps saying that you keep going even if you’re hurt, but I’m always worrying. What should I say to her?

Ibushi: I get the feeling you want me to get her to stop. Here’s the thing; your wife’s passion is basketball. So if she stops, yeah maybe her knee will be better, but another problem will come up and take its place.

Ibushi: Well, I would guess that his wife uses basketball to express herself in some way, and if you suppress that, it would be a big problem for her. In my opinion, I wouldn’t want to stop her, but I get that this guy feels very strongly too, and it comes from the right place.

Ibushi: I don’t know the exact details when it comes to his wife’s knee or how much this guy is worried. It would be irresponsible of me to put my foot down and say it’s the right thing to have her continue. But this is something she uses to express herself and release stress, so if you take that away, there’ll be at least some negative side effects. 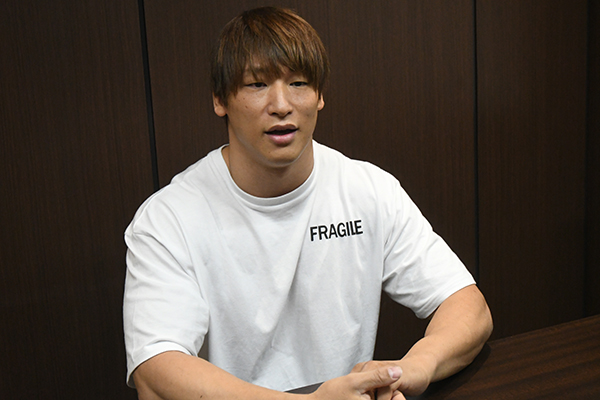 I’m in 8th grade, and I made the national swimming finals for my age group. But ever since I made the finals, I’ve started this big slump. My times just keep getting worse. Have you ever dealt with a slump?

Ibushi: Yes, I’ve had slumps. I think the best way is to take a step back if you can.

–That’s your style, it seems.

Ibushi: Right. Like if I find I can’t lift something on the bench, even if I know I have the strength in me, I tend to find it easier to try a different exercise. I work on a different muscle group, and then I find I can come back and bench that weight no problem.

–Otherwise that mental hurdle is too tough. So it’s best to take a break from swimming?

Ibushi: Yeah. I used to swim in high school too. This person is on a national level so I imagine she understands how much of a physical sport it is. Maybe if she took a break from the pool, and instead did other muscle or cardio work, she might find her times improving.

I’m 17. There’s this girl that I play a lot of games online with and send messages to and chat with. We aren’t dating, and I’m not the only one who talks with her, but whenever we hang out my friends always tease me about it. It drives me crazy. What do I do?

Ibushi: I mean, when you’re an adult, listening to this kind of question seems kind of ridiculous. It’s easy to say ‘who cares if they tease you?’ But I know when you’re in that pubescent period, it’s a different story. So all I’ll say is keep hanging out and playing games with this girl, and when your friends tease you, be proud that you have some emotional maturity.

Whenever I’m in a big meeting or something at work, I find it hard to speak up and voice my opinion. Is there some way I can find my way around that?

Ibushi: When I was a kid I had really bad stage fright, but there are lots of ways to get past it. I think for this guy, the main thing is to have confidence in what he’s saying. If you know you have a great point, you won’t be afraid to speak up. If you’re preparing a presentation, make sure your materials are great and everything looks super slick, and then you’ll automatically have more confidence when you present them. If you find it hard to voice your opinion, you need more confidence in the opinion itself. Then it’ll be easy.

My younger brother is only in second grade, but he keeps saying he wants to be a wrestler. He’s started swimming classes, and a kid’s kickboxing class, all with wrestling in mind. What’s the best way for me to support him?

Ibushi: I think at this point the best thing would be to help him with eating the right foods and look into how best he should exercise. Doing all that research won’t just be a big help for him, but it’ll be educational for you, too. Good luck! 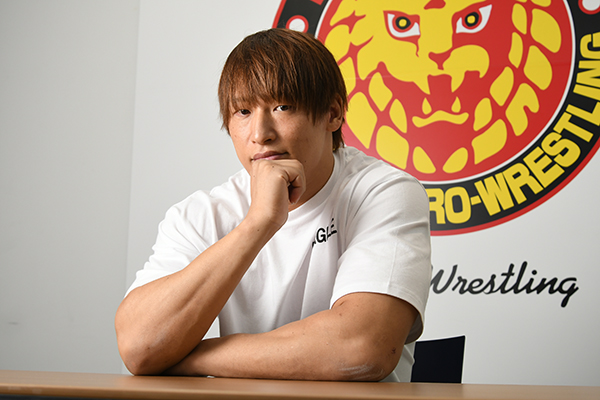