After close to 200,000 vtes were cast in the KOPW2020 fan poll on Twitter, the stipulations are now official for our four first round matchups, with all the action taking place in Korakuen Hall Wednesday night! 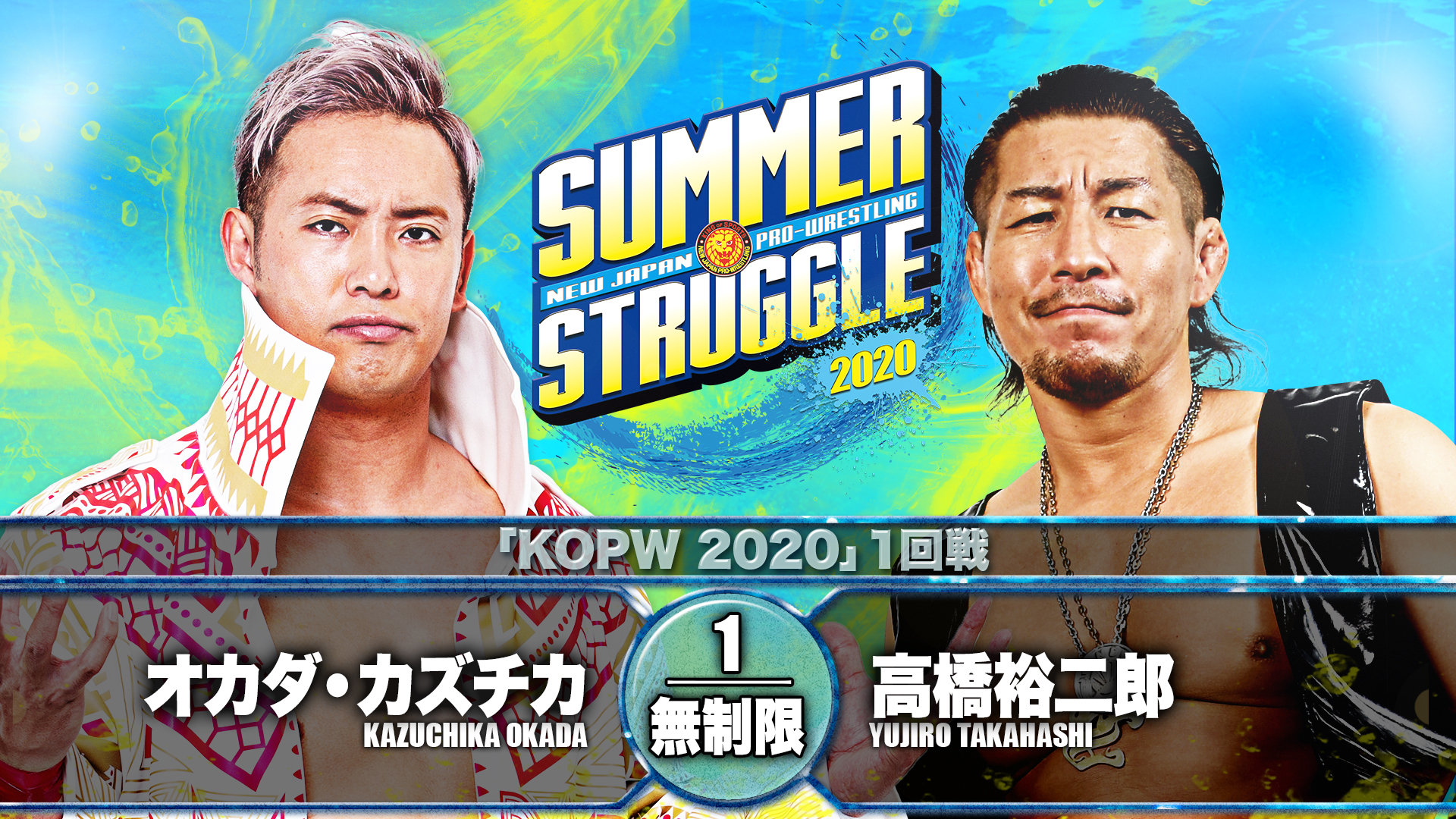 In the main event of the evening, Kazuchika Okada won’t just get his hands on Yujiro Takahashi, but Jado and Gedo as well; but he’ll have to do so alone in a one on three handicap match.

Okada was the first to pick rules for his KOPW2020 match after he admitted that his issue with Takahashi didn’t seem like ending after the two fought it out at Sengoku Lord last month. Yujiro Takahashi suggested a lumberjack with leather belts match in return, but the popular vote saw the Rainmaker’s suggestion take the win. Now can Okada put his money where his mouth is and defeat three members of BULLET CLUB single handed? Or will Jingu Stadium’s huge event on August 29 see no Kazuchika Okada, even in the concept match of his own creation?

Submissions match: No pinfall, DQ, Countouts. Victory is via submission only 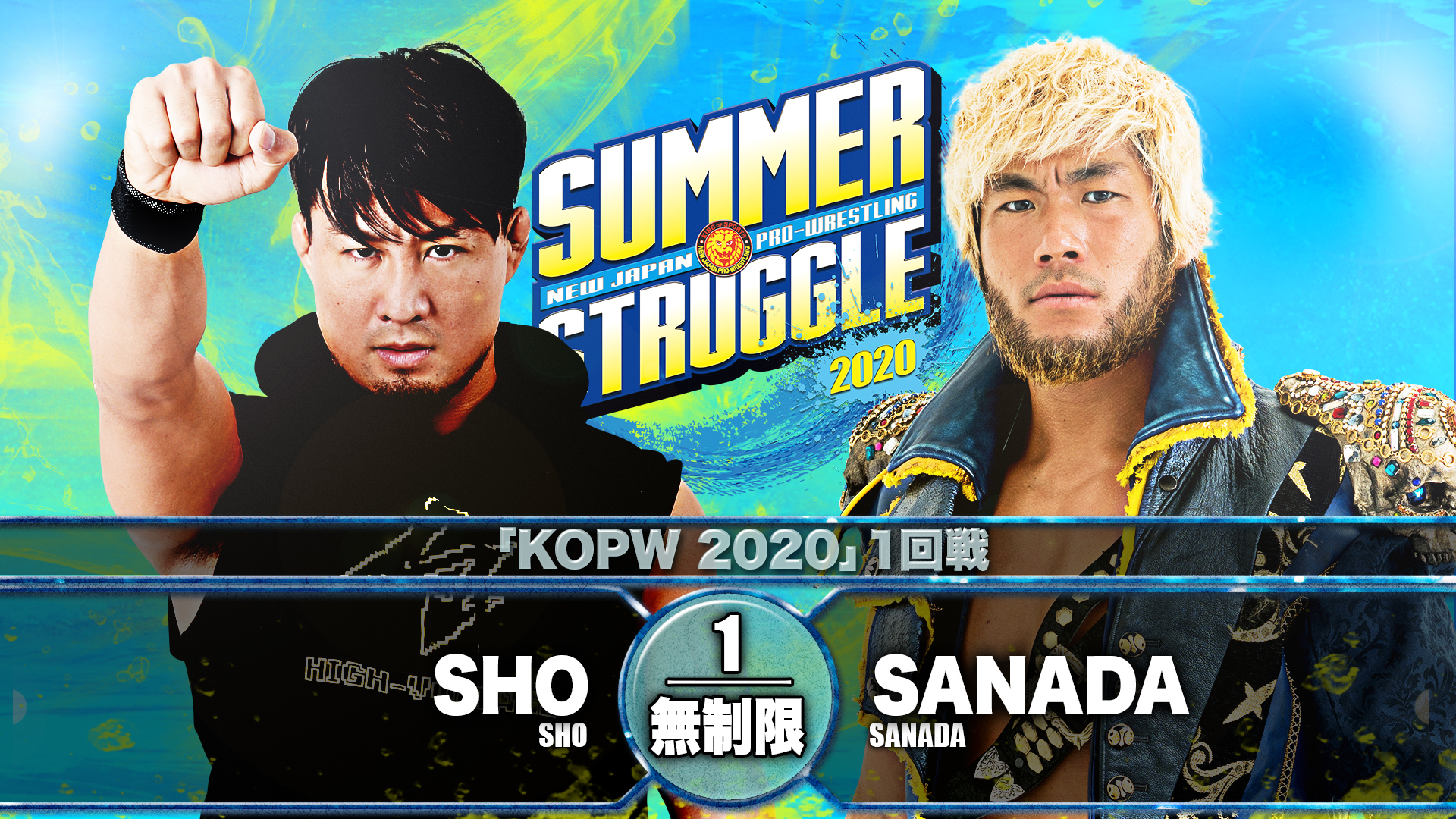 The ring is usually a place of conflict, where personal issues and disagreements are settled in the realm of combat. It’s rare we see opponents agree on something, but that’s what we have with SHO and SANADA’s meeting in KOPW 2020. SHO suggested submission rules for this one, and SANADA, having the ultimate casting vote in this situation said ‘I’m in’.

It was certainly a strange turn of events, given the fan voting element behind KOPW2020, but nonetheless, this should be a thrilling technical encounter. SHO has been determined to face SANADA once more one on one after Cold Skull sent him crashing out of the New Japan Cup with a Skull End submission. Convinced that his jiujitsu grounding should give him an edge in a submission driven matchup, SHO thinks the rules at play here can score him a huge victory, and give a much needed new direction for SHO in the wake of his tag team partner YOH’s injury.

SANADA too needs a victory. After EVIL sent Cold Skull out of the New Japan Cup and then threw away his tag team with SANADA in joining BULLET CLUB and taking double IWGP gold, SANADA has been left outside of the main event loop and wants to grab the NJPW spotlight in a major way. KOPW2020 could well provide just such an opportunity.

Two Count Pinfalls Match: Victory can only come via pinfall, at the referee’s two count 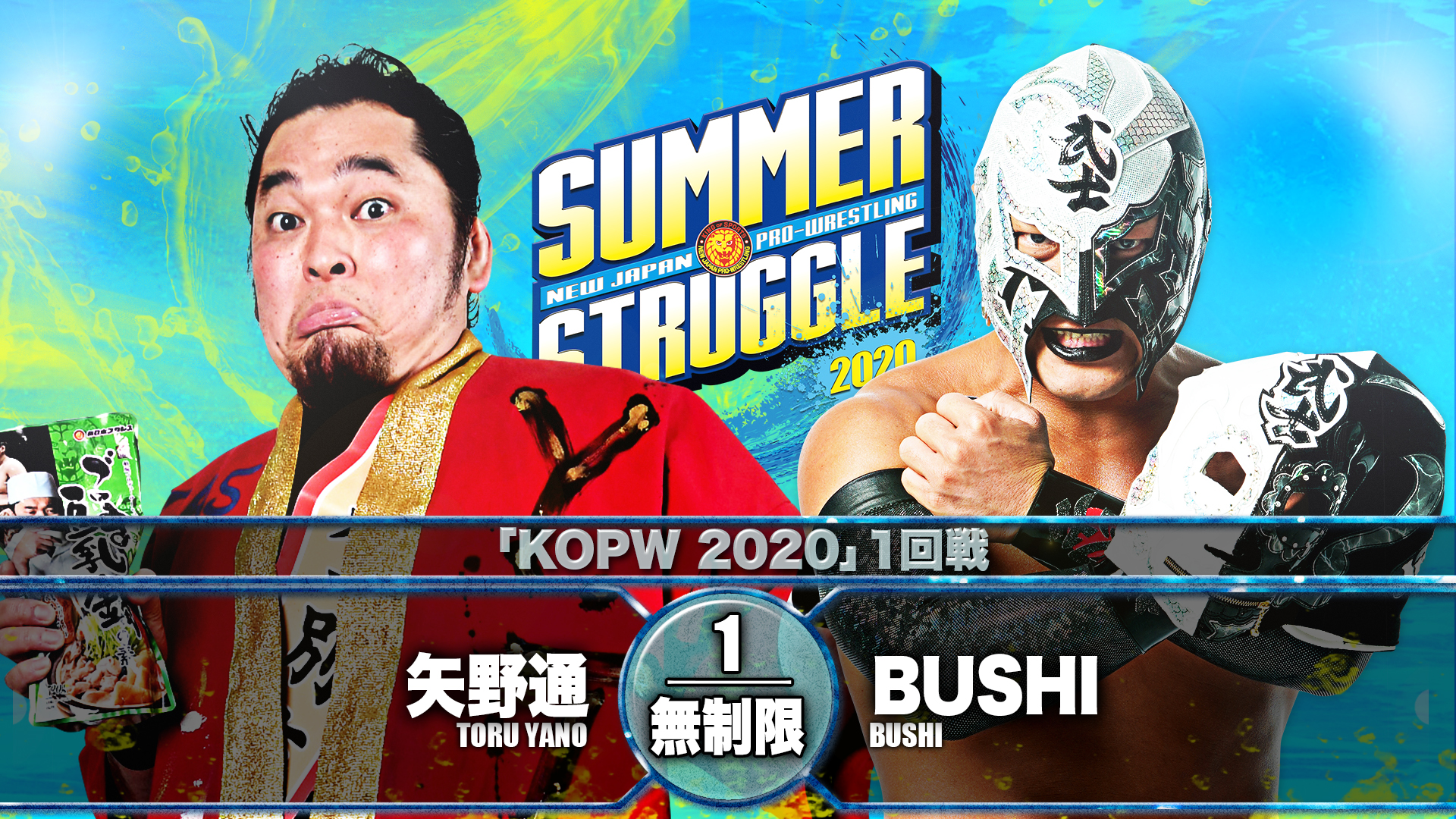 Toru Yano and BUSHI’s issues began with the Summer Struggle tour, when BUSHI surprised Yano with a sudden rollup in tag team action before KOPW2020 was even announced. Yano wasn’t taking his loss to Los Ingobernables De Japon’s masked junior heavyweight lightly however and vowed revenge elsewhere in the tour, gaining it when he tied BUSHI’s mask to a ringside barrier in Korakuen Hall and scoring a countout victory. That led BUSHI to proposing a five count countout match for this KOPW2020 first round contest, but Yano took the vote with this two count contest. He might have been caught for the three earlier in the tour, but the collegiate amateur standout Yano is convinced BUSHI can’t score the pin again, even if the referee only has to count to two. Can BUSHI prove Yano wrong? 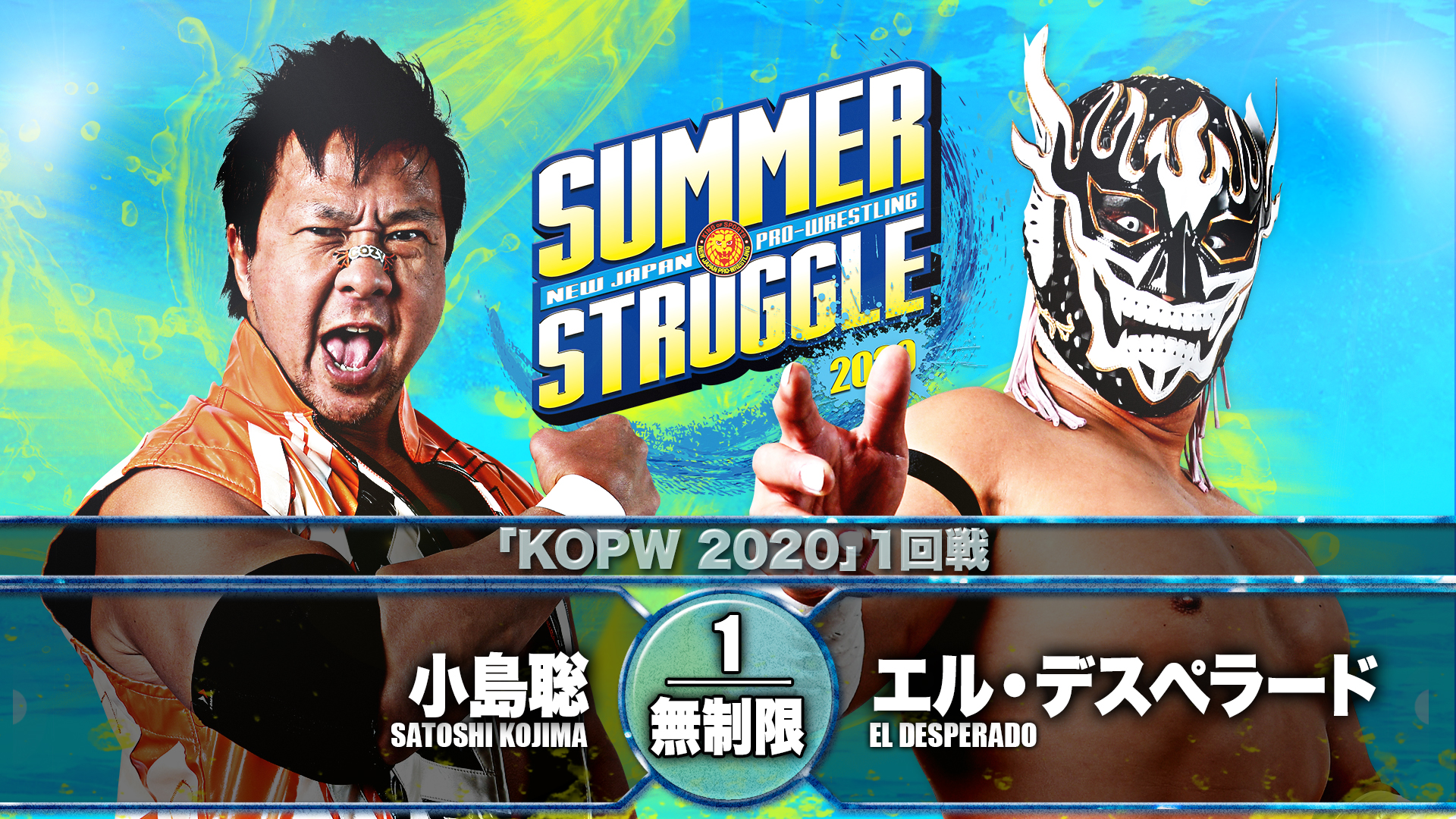 Satoshi Kojima is closing in on 30 years in an NJPW ring, and the owner of the strongest arm in NJPW isn’t afraid of opening himself up to any challenge. That’s why he threw his hat into the KOPW 2020 ring, but El Desperado was quick to mock Kojima’s wrestling ability and his creativity. Suggesting that the fans see whether Kojima’s lariat was stringer than his Pinche Loco, Desperado reacted with derision when his opponent OK’d the decision; when it was obvious that Kojima would take on any fight put in front of him, he decided to flip the script, instead suggesting neither man use their famous finishers. That’s what the fans chose tonight, and that’s how this bout will be decided. Who has the bigger arsenal? We’ll find out in Korakuen Hall. 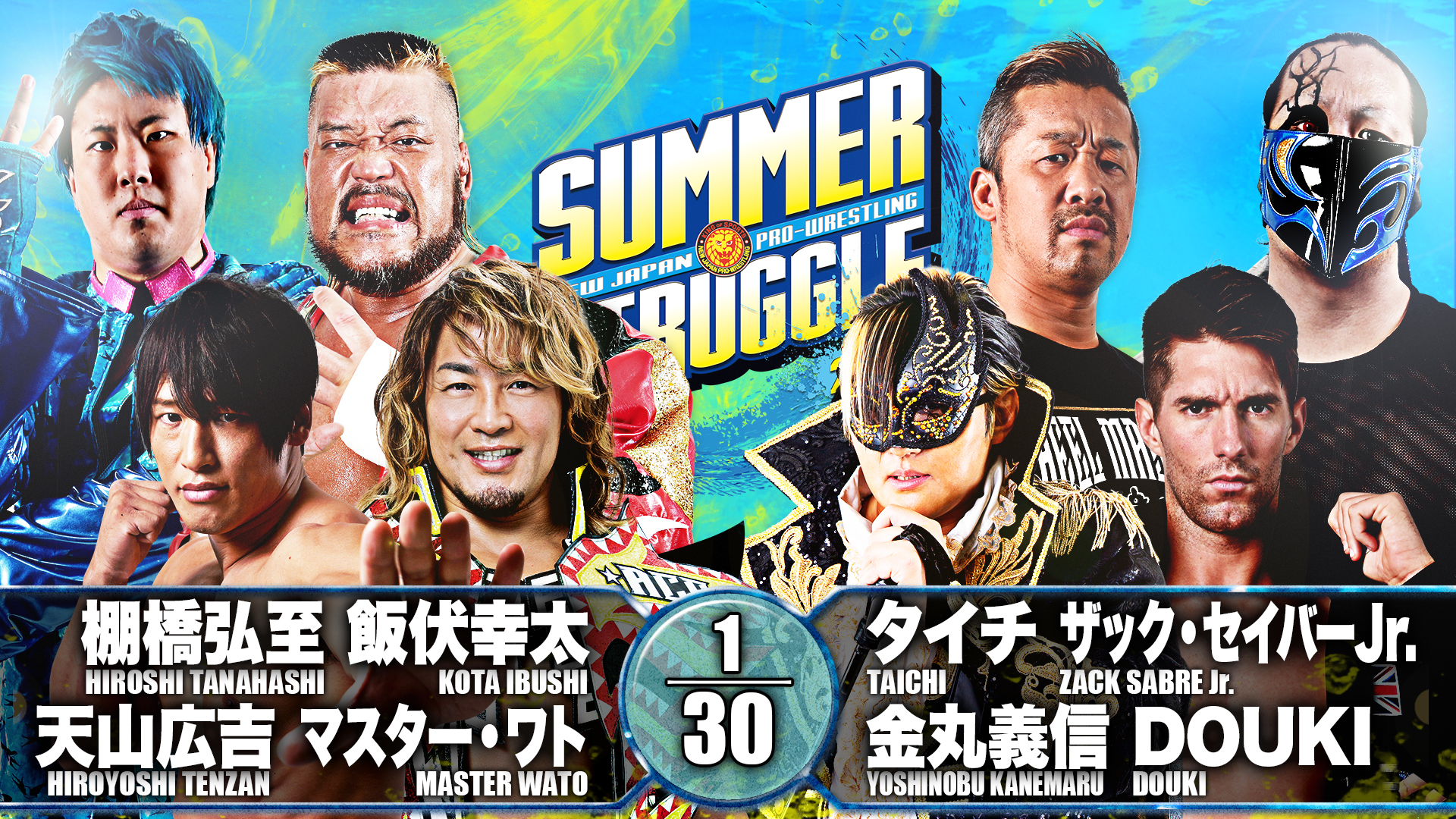 In the second match of the night, a pair of Jingu Stadium previews in eight man tag team action. For the best part of the Summer Struggle tour, Dangerous Tekkers had a comfortable edge on Golden☆Ace and Hiroshi Tanahashi in particular. Yet when UIbushi redoubled his commitment to Tanahashi, the Ace was able to tap into as confidence he had appeared to lose, and now the team has a chance to redeem themselves at Summer Struggle for the IWGP Tag Team Championships.

Then  there’s Master Wato, the Grand Master seeking to teach a lesson or two to the Heel Master, Yoshinobu Kanemaru in Jingu Stadium. After Kanemaru has mercilessly mocked the young master in recent weeks, Wato will look to make a powerful closing statement with just a couple of matches left before their singles encounter. 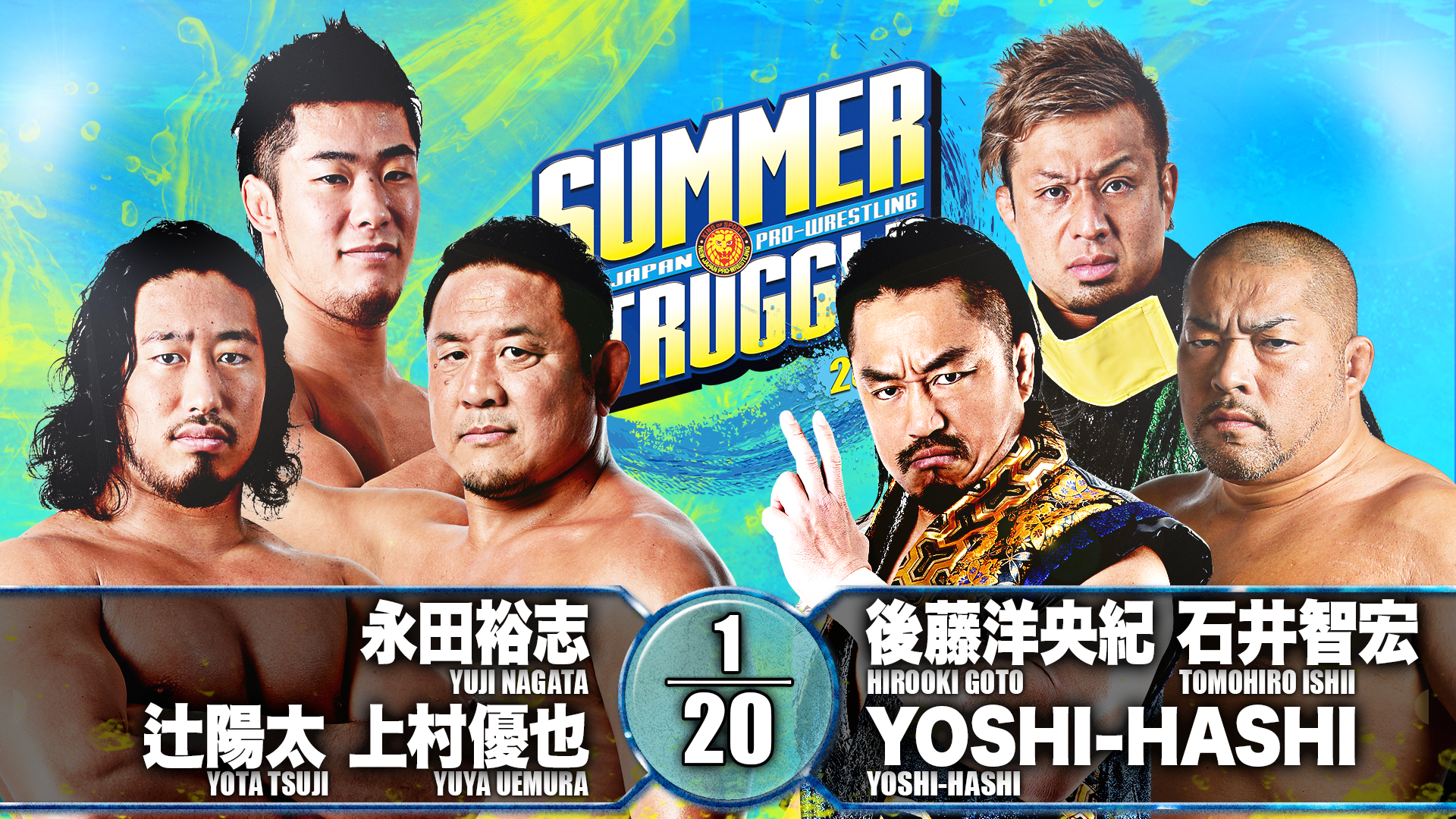 In a change to the originally scheduled matchup, Yuji Nagata joins Young Lions Yota Tsuju and Yuya Uemura. Certainly Nagata has the experience edge over the originally scheduled Gabriel Kidd, something the Noge Dojo boys will be grateful for, but they have to face formidable foes in the form of the new NEVER 6-Man Tag Team Champions. Goto, Ishii and YOSHI-HASHI will be eager to find their first challengers, and in the meantime will be showing just why they won the titles in the first place here tonight.