Naito wants to take things outside in press conference

Could annual stadium events be on the agenda?

The post Summer Struggle in Jingu press conference on August 31 saw Tetsuya Naito deliver his first public address since his second title win over the weekend. In addition, big announcements were made about the New Japan Road tour, the focal point of which will be a tournament to determine new IWGP Junior Heavyweight Tag Team Champions. SHO started the conference off by discussing the decision to vacate the titles. 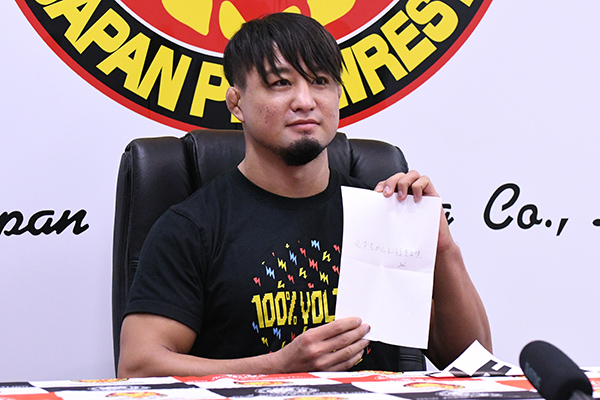 ‘I’ll start by reading a letter from YOH. “I promise I’ll be back to see everyone”.

Unfortunately, it appears as if YOH will not likely be back in action by the end of the year. As a result, and although I’m reluctant to do so, we have decided to vacate the IWGP Junior Heavyweight Tag Team Championships. These titles, which we won at the Tokyo Dome this year, are important to me and I plan to wait for YOH to come back so that we can take the titles back together. That said, I plan to move on in the meantime. In the immediate future, I’ll be in a title match for the NEVER (6-Man Tag) titles on September 11, and I plan on teaming with my CHAOS brothers, to beat my other CHAOS brothers and take the belts.’

The new double IWGP Champion was next to speak. 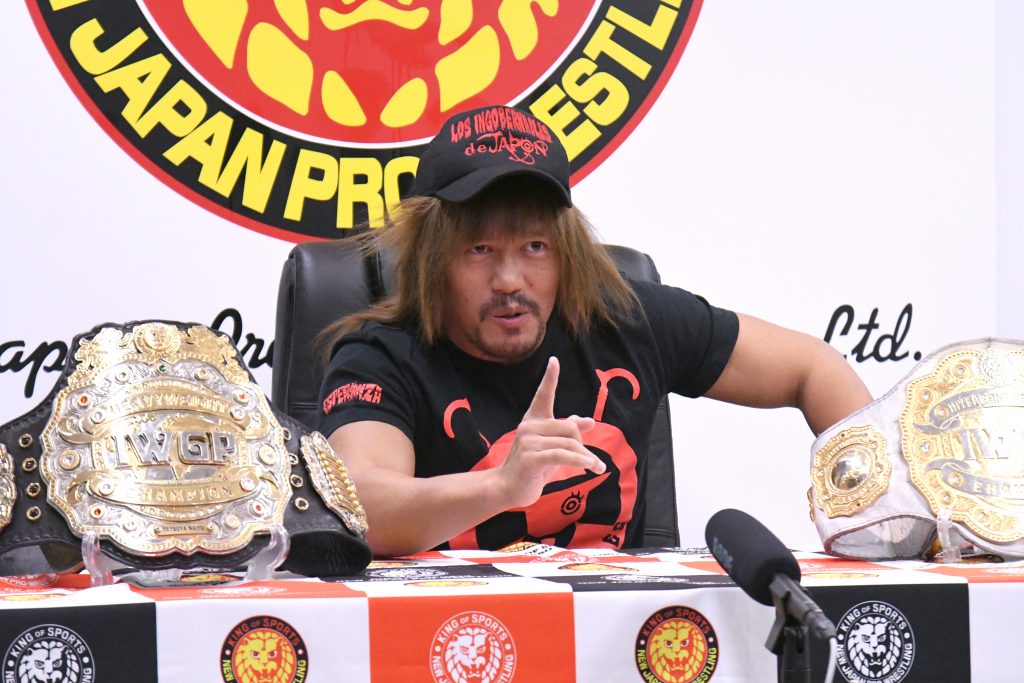 By the way, did you guys know? Yours truly is on the front of the sports section in Tokyo Sports today. That’s usually reserved for the Tokyo Dome, G1 final, or the year end awards, so for that spot to be given over to me and Jingu, that’s a sign the event was a big success. Of course, the main reason for that success is down to the fans that watched on TV, that watched on NJPW World, and that made it into the venue even in the sweltering heat. I appreciate all of you. 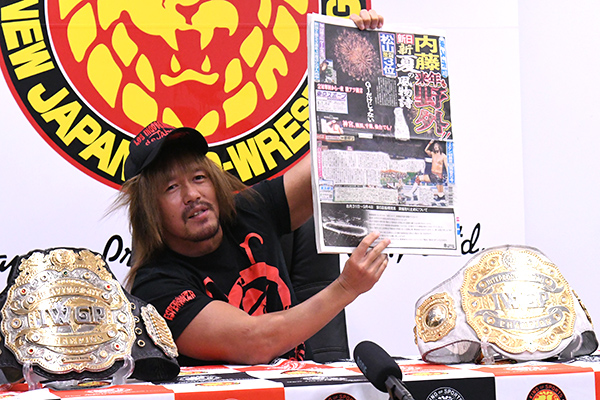 The next tour starts on September 3 and goes to Saitama, Chiba, Ibaraki, Miyagi and Korakuen Hall, and I’m looking forward to showing everyone what I look like while I make my entrance in all these places. And then, G1 Climax? That’s not for a little while yet. It’s the next tour that’s most important now.

In the meantime, there are two things that I really want to say here today. First of all, about these two belts. I always said that I want to take two belts at the same time. I never said I want to unify them. But with all these title matches being for both belts, maybe the company thinks that it should be unified. In that case, fine, go ahead and make one new belt for me to hold. But if these are two championships then I want to defend them both separately. That’s certainly easier for everyone to understand. Even if that means wrestling two title matches on one tour; that would be a tough schedule, but that’s the role I’ve put myself in. I’m up for it. I want NJPW, and the chairman, Sugabayashi, to make his call. Are these unified or not? 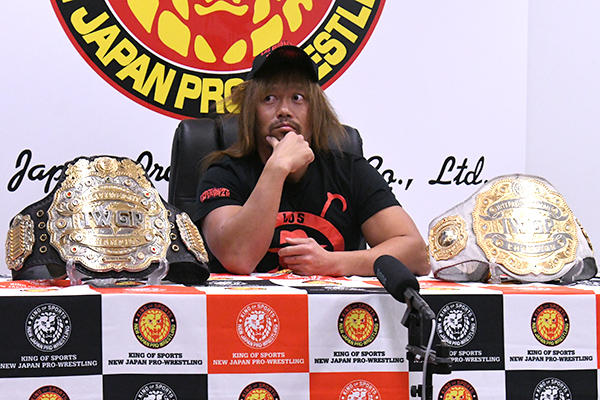 My second point is about big matches outside. Truthfully, we were supposed to have a big event in Madison Square Garden this year, but because of the Coronavirus situation, that event didn’t happen, and we were able to be in Jingu Stadium. Did you see what it looked like there? That massive stadium, and nobody was in most of it. The stands were mostly empty. I know that’s because of restrictions the country is under for the number of people we can put in there. I understand, but it’s still a big shame. I don’t want it to end like this.

So, my proposal is to have more events in the open air. Maybe you might worry about the weather, but I want it to happen. Maybe Jingu Stadium every year, or change it up and run in a different open air venue every year. There are a lot of stadiums used by pro baseball teams, or even other grounds, up in Hokkaido, or Okinawa even. There are a lot of possibilities. I want this to happen. Maybe in the future I can have a big LIJ roll call in Hiroshima’s Matsuda Stadium. Whatever, that’s just something I want, maybe it’s 80% me going into business for myself. But I want everyone to give it thought.

I had a day off yesterday, and went to Adachi to Higashi Ayase Park. There’s a little baseball ground there. All of a sudden, I got a call from an annoying reporter, but I decided to give an interview; and then I turned up on the front of the sports section. Thanks Tokyo Sports. Maybe some of that is down to (Tokyo Sports reporter) Okayama. I know you’re watching, and I know you want to have a full interview in our hallowed family restaurant. I’ll be waiting for the call.

Because i’ll be talking to Okayanma, I need to go ahead and make a reservation at the very finest family restaurant there is. Those places fill up fast, so I’ll be off now. Until the next tour, adios!