Summer Struggle is behind us, and we now embark on the New Japan Road to G1 Climax 30, which starts on September 19. Traditionally of course, this is the period immediately after the summer tournament, and creates a lot of historical moments to discuss: 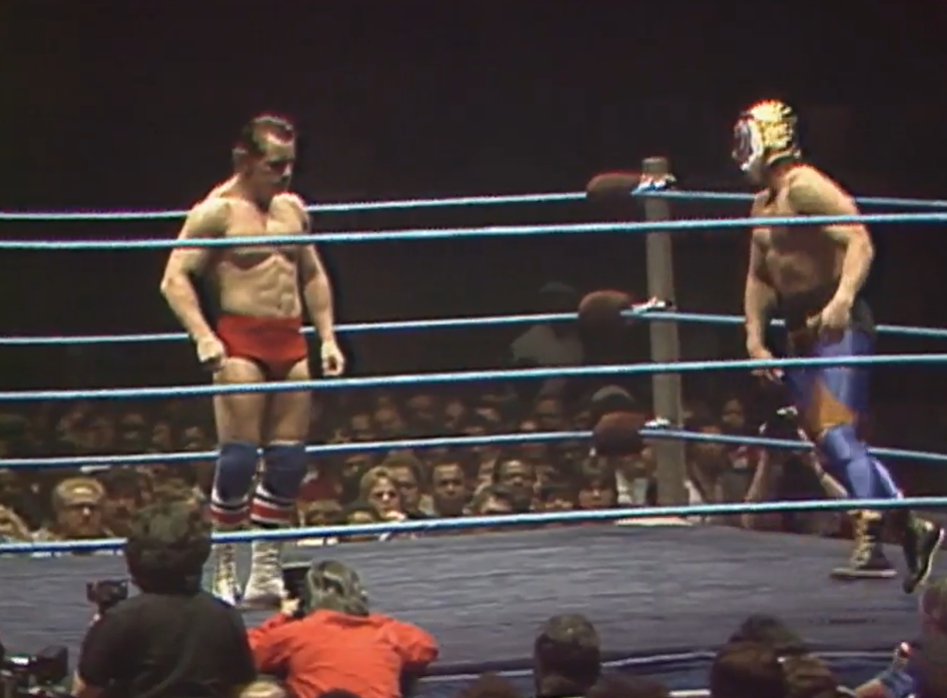 While Jingu Stadium certainly saw an appropriately dramatic end to the summer in NJPW, originally it would have been Madison Square Garden in new York City that would have seen a summer spectacular. Wrestle Dynasty might be off until 2021, but there’s still an incredible MSG memory this week in history that those present will still have fresh in their minds.

In 1982, Tiger Mask mania was in full swing in Japan, and his rivalry with Dynamite Kid was at its peak. As bitter as their hatred was, Dynamite and Tiger Mask put on increasingly innovative matchups that blew away audiences in Japan. Introduced in contrast to the contemporary style that New York fans were used to, this sixth defense of Tiger Mask’s WWF Junior Heavyweight Championship fairly blew NYC away. 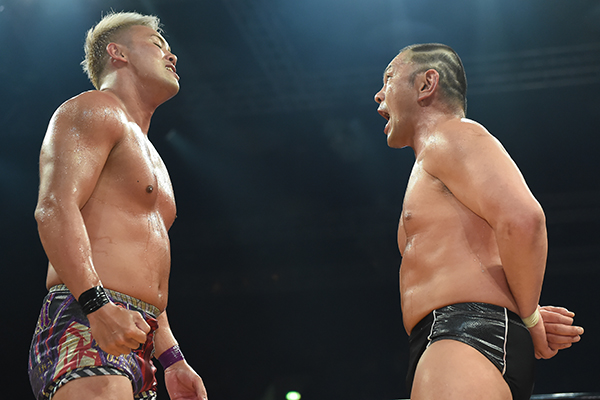 As we get ready to start the first ever autumnal G1 Climax on September 19, one would have to assume that the new NEVER Openweight Champion Minoru Suzuki would factor into the lineup. Especially, one would think, when considering that his exemption from the field of 20 last year carried with it some violent consequences.

Enraged at his exclusion from the tournament field, Suzuki reacted with violent rage throughout the summer, culminating in a tag match on the tournament’s final day in the Nippon Budokan. There, a Gotch Style Piledriver struck to IWGP Heavyweight Champion Kazuchika Okada, and with that, opportunity knocked. Encouraging his Suzuki Army worldwide to riot until he was granted what he wanted, Suzuki laid the groundwork for revenge, and an IWGP heavyweight Championship match in NJPW’s London debut.

Royal Quest saw a jam packed Copper Box with a crowd even hotter than the late summer night outside. A fitting Okada and Suzuki main event was their reward, and provided a thrilling end to an incredible event. 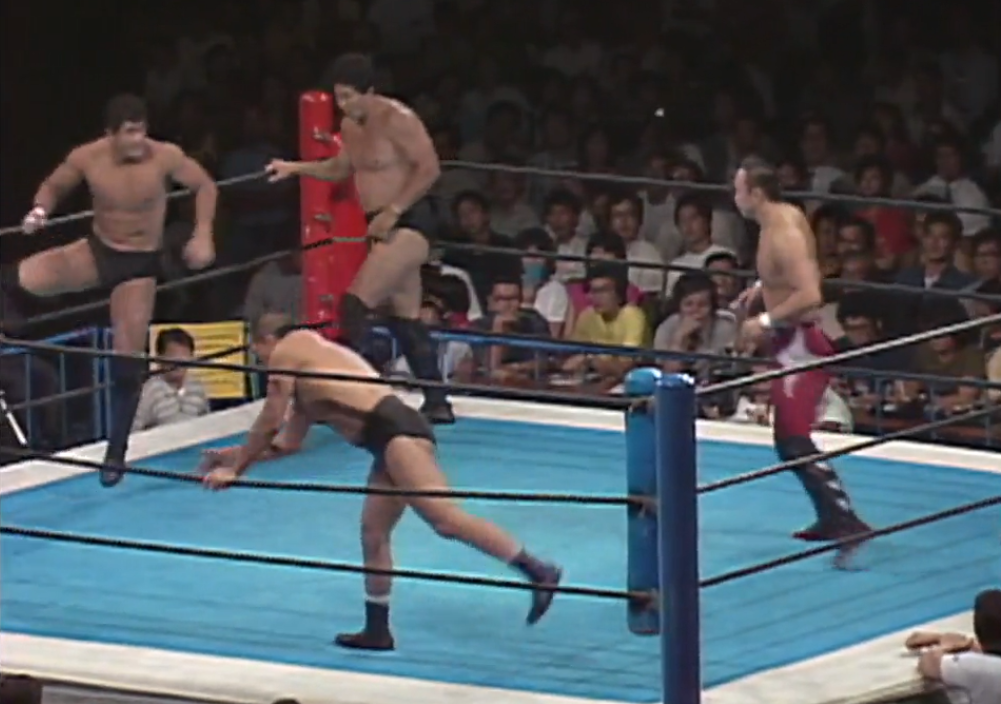 September 1987 kicked off in Fukuoka, with the Sengoku Battle Series. A highlight was an IWGP Tag Team Championship match with some interesting alliances at play as Nobuhiko Takada and Akira Maeda defended their titles against Yoshiaki Fujiwara and Kazuo Yamazaki.

Maeda and Takada had won the titles back in March, to the chagrin of many fans. They’d beaten Keiji Muto and Shiro Koshinaka to do so, two who had stayed loyal to New Japan when Maeda, Takada and others had walked out to form the upstart UWF organization in 1984.

As the promotion crumbled, the UWF U-Turn had seen its members back in New Japan, and seeking to make a violent statement. Yoshiaki Fujiwara would be making many of those statements at the expense of New Japan’s established heroes, and made an effective team with the younger Maeda.

In 1987 though, allegiances would shift somewhat. Inoki’s victory in the IWGP League to become inaugural IWGP Heavyweight Champion would be the genesis of a generational rift in New Japan, one that caused shockwaves even in the UWF camp. Maeda and Takada would find themselves on the side of Tatsumi Fujinami and Riki Choshu’s NEW Leader faction, while Yoshiaki Fujiwara would be with Antonio Inoki in the NOW Leader group.

Just days before this tag team match, a singles preview between Fujiwara and Maeda was a brutally violent affair in Korakuen Hall, Fujiwara eventually able to submit his former student. Now, Fujiwara would team with another young UWF prospect in Yamazaki to take on Maeda and Takada for the titles. 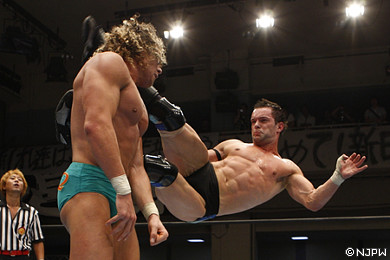 Jingu Stadium saw Taiji Ishimori climb to the top of the junior heavyweight championship mountain in fine form against Hiromu Takahashi, but ten years ago, it was another muscular junior heavyweight that was dominating the field.

Prince Devitt was already one of the most successful junior heavyweight tag team wrestlers in the world, dominating the best part of the decade with Ryusuke Taguchi as Apoll0 55 when he beat Naomichi Marufuji in Osaka at Dominion to earn his first singles IWGP championship. A fighting champion through and through, Devitt took pride in his upbringing in NJPW Dojos in Noge and LA. Having defeated Marufuji of Pro Wrestling NOAH to win the title, he would defend against another NOAH member a month later in Atsushi Aoki, before making his next defence against a DDT representative in Kenny Omega.

Omega’s partner Kota Ibushi had exploded onto the scene in NJPW in 2009 amid a good deal of hyope, and instantly backed up that hype in the ensuing Best of the Super Juniors. A year later and Omega had much the same pattern, instantly drawing Devitt’s attention. In Omega and Ibushi, Devitt had two of his most exciting rivals in singles and in tag team contests for the months and years to come, and this thrilling Korakuen Hall main event was just the beginning. 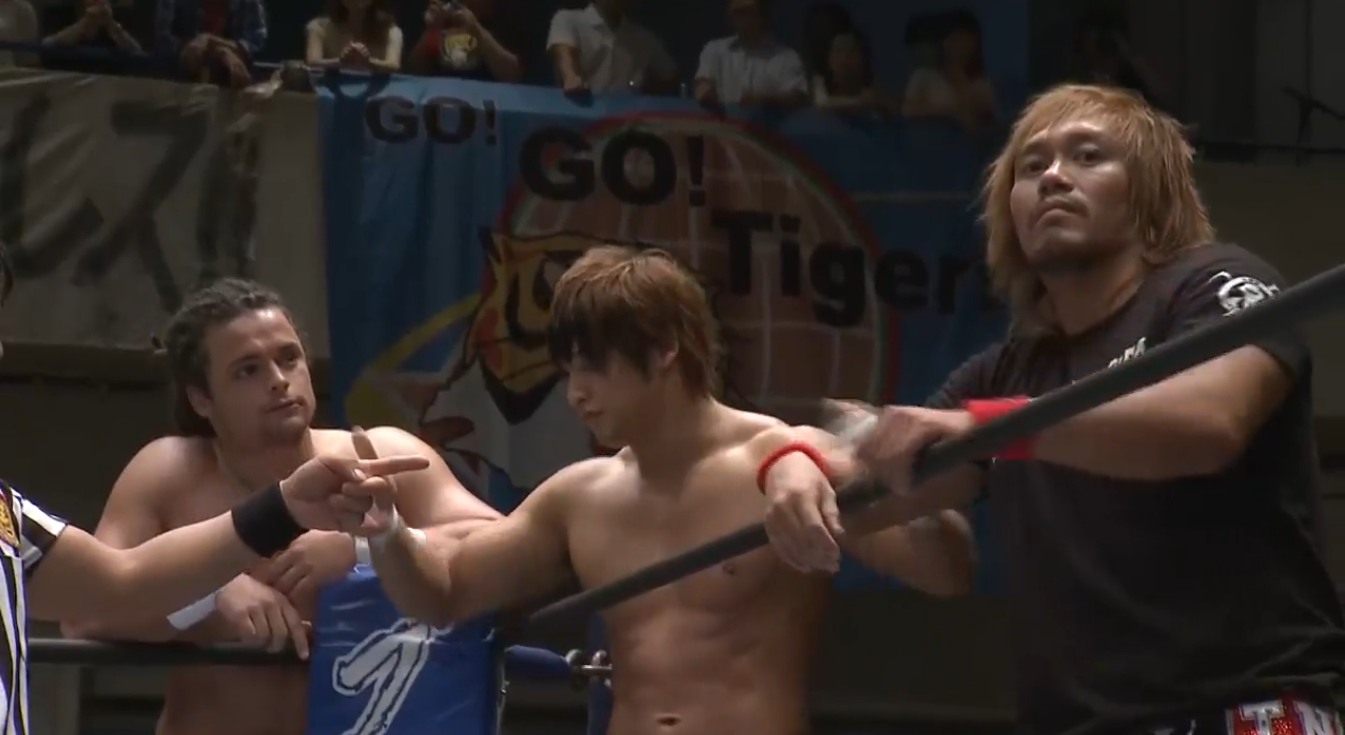 A rocky few months for Los Ingobernables De Japon might have ended with Shingo Takagi and Hiromu Takahashi without championship gold after Jingu, but Tetsuya Naito was able to vanquish EVIL to walk out with doible IWGP gold once again.

EVIL had been Naito’s first ‘pareja’ in what would become LIJ, but in the weeks before the King of Darkness made his first appearance, Naito was at somewhat of a loose end. It wasn’t until Ryogoku and King of Pro Wrestling in October that EVIL would emerge, and in the meantime, Naito was put in tag matches on the road to his match with Katsuyori Shibata in Kobe with hontai members.

In Korakuen Hall that meant teaming with a Kota Ibushi he already recognised as a major rival, and Juice Robinson, who had just joined the New Japan system. ‘Non-plussed’ would be a charitable way to describe Naito’s mentality going into this particular bout, while Ibushi was more focused, with sights set on Togi Makabe’s NEVER Openweight Championship.