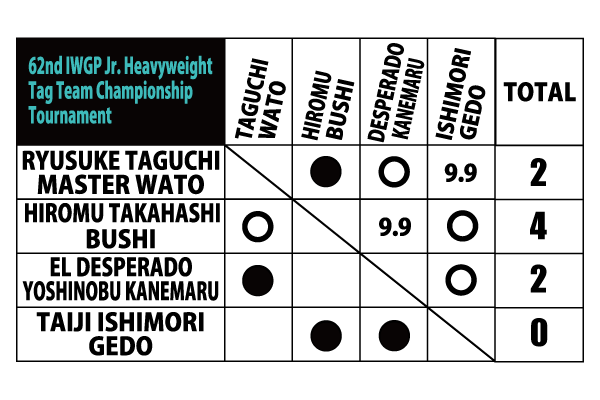 Night three of the New Japan Road tour on September 6 saw Master Wato & Ryusuke Taguchi face off with the LIJ duo of Hiromu Takahashi and BUSHI in a match where the winner was guaranteed a place in Friday’s championship deciding final. Meanwhile, the ‘Reborn Complete Players’ of Gedo & Taiji Ishimori and the Suzuki-Gun team of El Desperado & Yoshinobu Kanemaru needed a win to remain with a strong chance.

It was BULLET CLUB and Suzuki-Gun kicking off the league action for the night. Two teams of rule breakers were never going to fight clean, and Gedo and Ishimori got the upper hand early, baiting Desperado into an attack from behind before Gedo brought the masked man to the outside and went to work with a leather belt. Expertly drawing the referee to dictate the flow of the match, Gedo and Ishimori retained control with use of an exposed buckle and liberal choking; all until Desperado was able to pull the referee in Gedo’s path and allow for a dropkick. 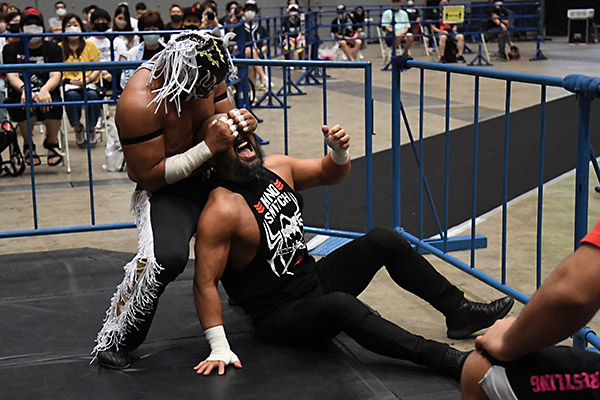 Kanemaru would have Gedo in trouble with a Figure Four, and even when Ishimori prevented the submission, the Suzuki-Gun duo maintained their assault on Gedo’s left knee. As Kanemaru and Desperado went through the hits of their playbook, kanemaru felt close enough to victory to attempt Deep Impact, but Gedo was able to use a low blow to avoid disaster, bringing in Ishimori.

The IWGP Junior Heavyweight Champion continued his long held rivalry with Kanemaru, who was able to prevent a Bloody Cross, but Ishimori connected hard with a knee to Desperado, and brought in Gedo who scored a nearfall off a closed fist and jaw breaker. Both Despe and Gedo each tried to draw the ref long enough to hit a low blow to no avail as the match broke down; Desperado nearly secured victory with Numero Dos but for Ishimori’s intervention.

Ishimori would also prevent Kanemaru’s use of an alchoholic surprise, and with all four men on the mat, Gedo reached for his brass knux. The BULLET CLUB veteran couldn’t hit the KO punch however, met instead by a mighty right from Desperado and the whiskey bottle from Kanemaru. Pinche Loco followed for the win. 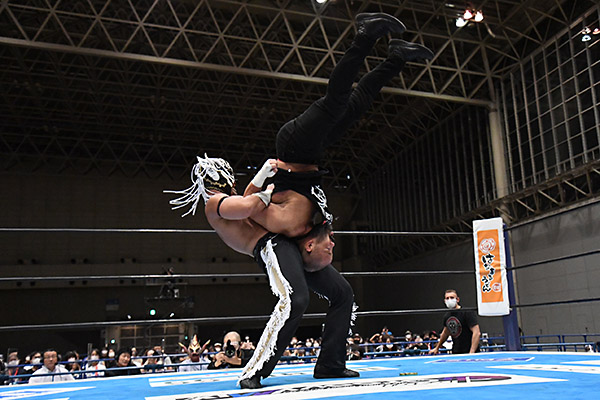 Master Wato elected to start in the main event opposite Hiromu Takahashi, and started fast with some impressive strike combinations to the former Junior Heavyweight Champion. BUSHI though would be more underhanded in his attack on the ‘Grand Master’, choking the young newcomer with his shirt to shift control of the match to LIJ.

Hiromu would keep up the pressure on Wato, mocking Hiroyoshi Tenzan at ringside as he hit an exaggerated Mongolian Chop, and frustrating Taguchi, who came to Wato’s aid only for a flying hip attack to find empty canvas. An immense dropkick from Wato though, and a window to the hot tag was finally open, big match Taguchi throwing B-Triggers to both opponents and hitting a springboard Hip Attack for two. 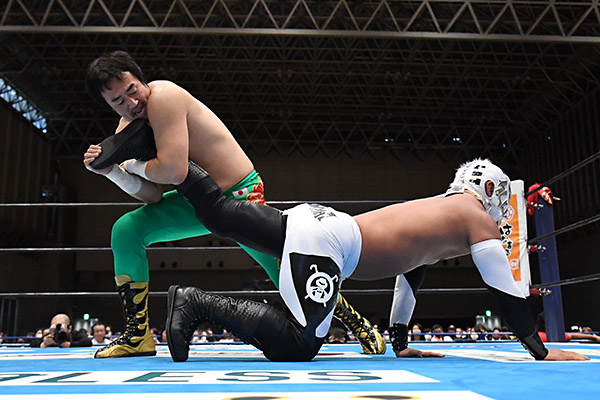 Oh My and Garankle followed for Taguchi, and the Coach was able to thwart Hiromu’s attempts to cut Taguchi off. Wato dove with a Tornillo to Takahashi and Taguchi hit a Bummer Ye before putting BUSHI back into the ankle hold, hitting an enzuigiri when the masked man found the ropes.

The pace quickened when Hiromu hit the ring with Wato, the Time Bomb going full speed ahead with dropkicks and a Falcon Arrow for a two count. A running Death Valley Driver into the corner was followed by a Time Bomb attempt, but Taguchi made the momentary save. A plancha to BUSHI took one half of LIJ out on the floor, and a double team Dodon connected to Hiromu, but didn’t secure victory; Wato’s RPP would find nothing but mat as he and Hiromu reset. 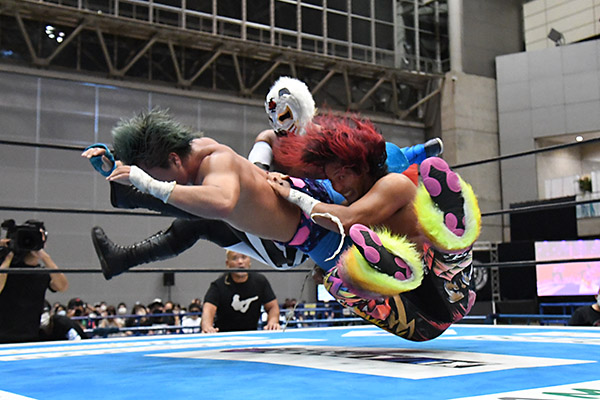 BUSHI and Hiromu connected with a spectacular suplex into a powerbomb, only scoring two, but moments later LAT connected to bring a second consecutive win to Los Ingobernables De Japon. League matches conclude Wednesday in Sendai, with the top two point scoring teams facing off for the vacant IWGP Jr. Tag titles Friday in Korakuen Hall. 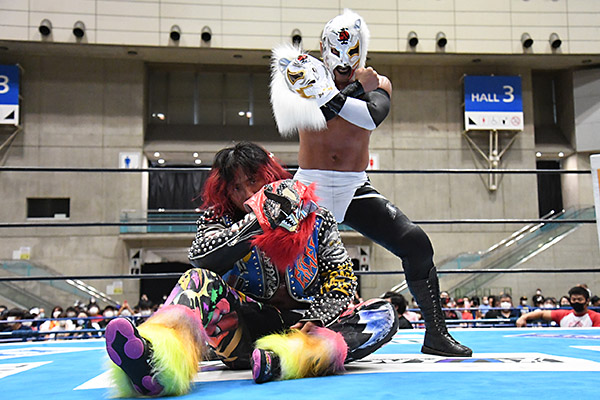