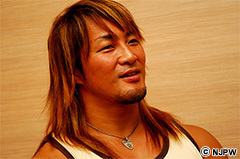 –We’re continuing our discussion of 2001 in your career. In September that year you wrestled for All Japan Pro-Wrestling, teaming with Osamu Kido against Masanobu Fuchi and Yuto Aijima. Was there some pressure going to a different promotion for the first time?

Tanahashi: No, not really.

Tanahashi I was really confident in myself. I wanted to show the AJPW fans the kind of young talent that NJPW could produce, and I thought I might be able to steal some fans away from them.

–That was September 8, and the next night on September 9 in Chiba, you rolled up Scott Hall. That was a huge win for you; earlier that same year Hall had challenged for Keiji Muto’s Triple Crown Championship and here you were less than two years in with a victory over him.

Tanahashi: He was a big deal in America. I was always a fan of his, I remember watching his matches with Shawn Michaels in the WWF over and over. A classical type, had the flashiness and character where it counted, and a classical style when it came to getting it done in the ring.

–You followed a lot of American wrestling. I hear you were a big fan of Rick Martel in his WWF days?

Tanahashi: Oh man, I loved the Model, that narcissistic character. In the end, late 80s, early 90s American stuff really influenced me. I took my armdrags from Ricky Steamboat, my forearm from Tito Santana.

–Then in October of 2001 in Ueda, you had your first ever main event, teaming with Yuji Nagata and Manabu Nakanishi against Satoshi Kojima, Hiroyoshi Tenzan and AKIRA. If you didn’t feel pressure in AJPW, did you feel it in your first main event?

Tanahashi: Well, it didn’t mean I was a main eventer so much as they just chose one young guy to fill out the tag match, so I didn’t think about it too much. Really at that point I was taking each opportunity as it came, and just doing what I could. I’d think about it like a very freeing time of my career, feeling like I was climbing the ladder… I was a really pretentious idiot wasn’t I (laughs).

–Calculating, maybe is a kinder word (laughs). Back then the World Tag League was known as the G1 Tag League, and you and Kenzo took part.

Tanahashi: Yeah. I remember in Fukui, we wrestled TenCozy, and that was a really exciting matchup for me going in. The match sucked though.

–Tenzan and Kojima were really just approaching their competitive primes, it certainly would have made for a hot match on paper.

Tanahashi: Right, and because we were all Japanese guys it felt very partisan, like me and Kenzo had a chance to steal away some of TenCozy’s fans for ourselves.

–Are there any singles matches from that period that stick with you?

Tanahashi: Hmm. I liked the match I had in (Tatsumi Fujinami led NJPW offshoot) Muga with Tony St. Clair.

Tanahashi: He was just so good, he’d pretty much just play with you. Just an expert at using his opponents own momentum against them. I remember the finish was me countering his crossbody into a pin and then him able to counter that and roll me up into a small package.

Tanahashi: I really felt afterwards ‘now that’s pro-wrestling’. It made me a fan of the small package as a hold. Fujinami would often win matches by small packages or backslides. I think it represents pro-wrestling beautifully, this idea that if you don’t give in until the very end you can pull off a victory.

Tanahashi: Right, but for me, as a young guy using that hold, it led to a lot of boos. In around ’05, I figured the German Suplex was my primary finish, but most of my wins were from inside cradles (laughs).

–To get back to 2001, December 23 saw a Yume Kachi event, which was where young wrestlers were pit against veterans. You took on Manabu Nakanishi in what was your first singles main event.

Tanahashi: I don’t remember much of the match itself, but I was really motivated to move up, to do whatever it took to make it to the main event. I thought about who would be the best opponent to get me in that main event spot, and then started appealing really hard to be put opposite Nakanishi. The match itself though? It was a stinker.