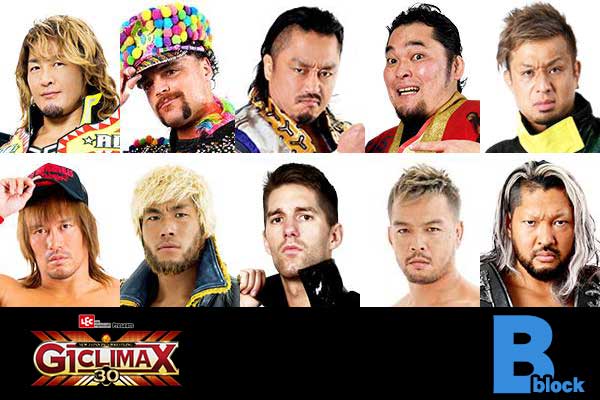 September 19 will see wrestling’s greatest tournament get started in Osaka. 20 of the world’s best heavyweights will do battle in 19 events in the coming month, all heading toward three days in Ryogoku Sumo Hall. We continue our  at the names involved. 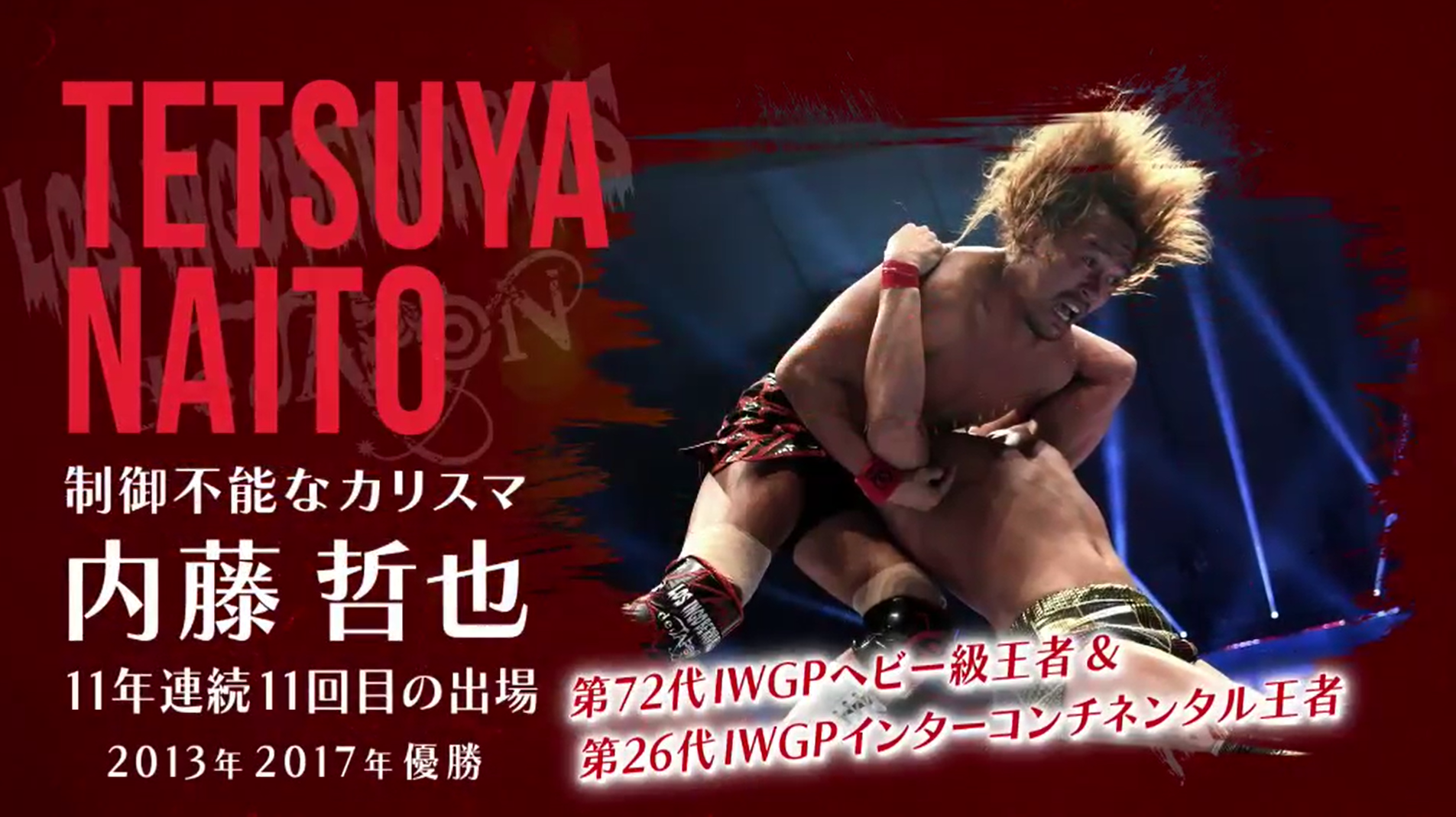 Tetsuya Naito is particularly motivated by two things: overcoming odds and the prospect of making history. When they both coincide, so much the better; El Ingobernable entered the Tokyo Dome at the start of January at a low ebb physically and mentally and walked out of the Double Gold Dash the first ever man to win both the IWGP Intercontinental and Heavyweight Champions. In Jingu, he became the first to achieve the feat twice, pinning EVIL in Jingu Stadium to lift both prizes aloft once more, despite BULLET CLUB’s best efforts to stack the deck.

Should Naito win G1 Climax 30, he would be the third to do so as IWGP Heavyweight Champion, behind Keiji Muto and Kensuke Sasaki. But he would be the very first Intercontinental Champion to pull off the feat, and obviously the first man to do so while both titles were in his possession. That place in the history books will be mightily enticing, and the fact that everyone has sights on the champion during G1 season means that the odds are against Naito enough to create a perfect motivational storm. And should he win? Naito already has plans to nominate his challenger for Wrestle Kingdom; all he has to do is light the fuse…

Key to Naito will be how he performs out of the block, and Hiroshi Tanahashi will be a tremendous test for both men on night two in Osaka. Apart for three years when it comes to singles competition, much has changed since G1 Climax 27, and Naito’s victory over the Ace on the way to his second G1 crown(coincidentally or not, four years after Naito beat Tanahashi to win his first G1 Climax trophy). Both men like working their way from underneath to flip the script and beat the odds, but in the opening match of their campaigns, both will be fresh, and both will be looking to dictate a victorious pace.

SANADA had a mixed G1 Climax 29 with painful losses and glorious wins. A slow start to his campaign raised serious doubts, but it was in Osaka that he finally scored a decisive victory over his rival Kazuchika Okada with just 13 seconds left on the clock. The win, though too late to improve his standing in the tournament significantly, turned Cold Skull’s fortunes around, and opened the door to a memorable championship encounter with the Rainmaker in Ryogoku.

That title match ended in defeat however, and SANADA has had to deal with further losses in 2020; to Zack Sabre Jr. over the British Heavyweight Championship, to Jay White at New Beginning in Osaka, and then to EVIL during the New Japan Cup. Now entering his fifth G1 Climax, there must be considerable pressure on SANADA, the only LIJ member not to have won a title in 2020, to step up in a major way. There is no doubt that SANADA knows that, and will be looking to expand his list of very favourite places to be in Japan this autumn.

Tetsuya Naito always relished the prospect of a intra LIJ warfare. Last year his battle with Shingo Takagi in Osaka was a tournament highlight, as indeed was SANADA and Naito’s first meeting in G1 Climax 28 in Yokohama. In 2016 too, Naito triumphed over then LIJ member EVIL, meaning he is 3-0 in LIJ derbies. This time, SANADA has the home town edge when facing El Ingobernable. If there is one match that can challenge the status quo in Los Ingobernables De Japon and instantly turn SANADA’s 2020 fortunes around, it’s this one. 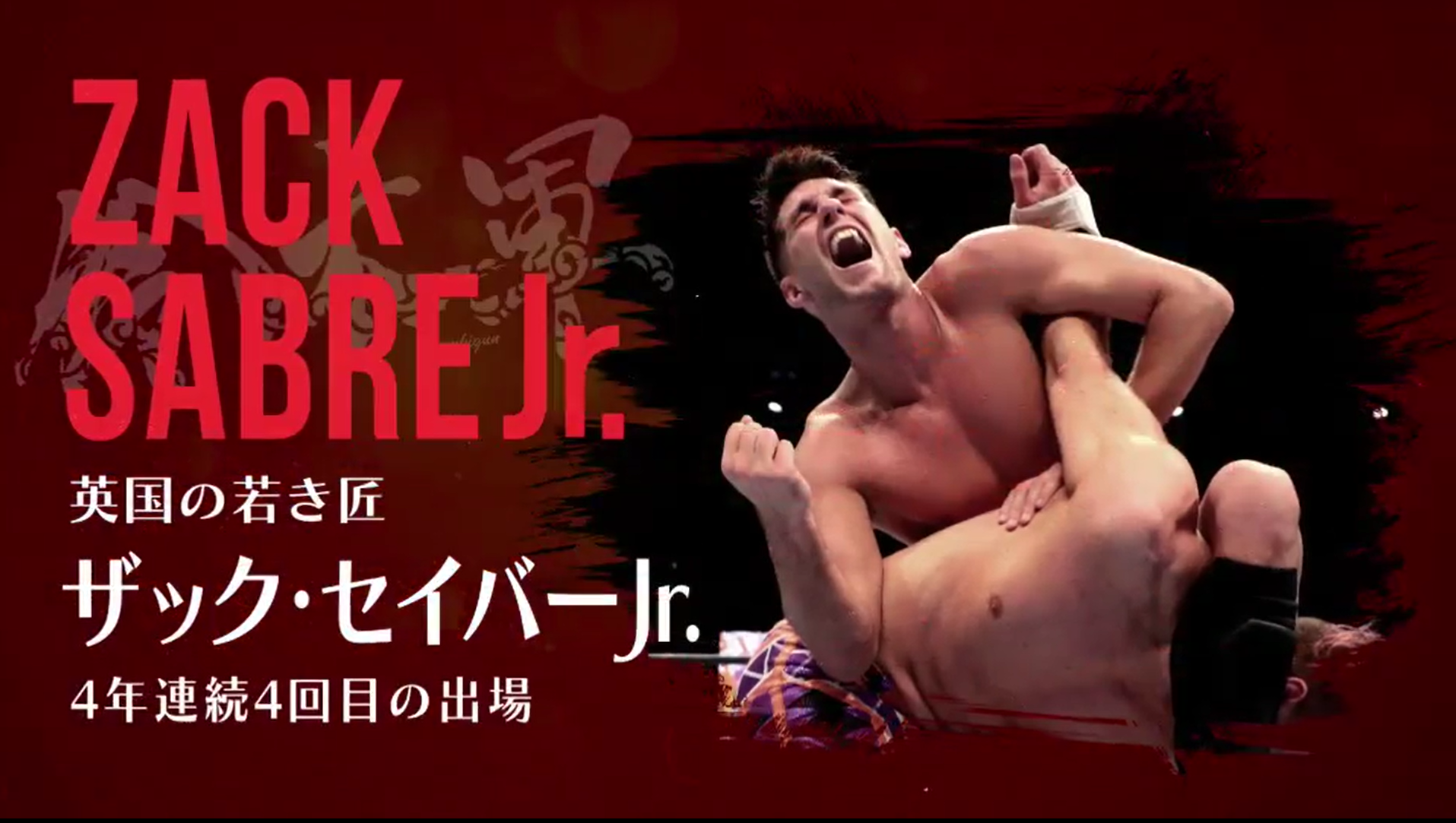 ZSJ enters his fourth G1 wearing his first IWGP title, he and Taichi having won the IWGP Tag Team Championships back in July at Dominion. It’s every man for himself in the G1 of course, but Sabre is certainly more than equipped for singles competition as well. Already, back in February he was targeting both IWGP US Heavyweight Champion Jon Moxley and then tag champions Hiroshi Tanahashi and Kota Ibushi at the same time, and while circumstances have shifted in the wild ride that is 2020, Zack’s philosophy remains the same. While maintaining control of tag team gold, if a certain trophy could also lead to big time singles championship gold as well, then so much the better.

Yes, ZSJ and EVIL have been connected since October of 2018, and a would have been singles match at King of Pro-Wrestling that year that was waved off after Chris Jericho’s intervention. Yes this issue spilled into 2019, and three matchups that by the third of the trilogy saw EVIL up 2-1, a scoreline that the Briton will be eager to address. More pressingly for ZSJ is this bout’s opening match status. Last year a strong finish to his campaign could have put the British submission master in contention for victory had it not been for a disastrous opening that frequently saw temper tantrums from the man himself and doubt from onlookers and pundits. A win for Zack in Osaka would be a good step toward exorcising those ghosts of 2019, and a victory over the only recently deposed double IWGP Champion would look pretty good on any wrestler’s CV. 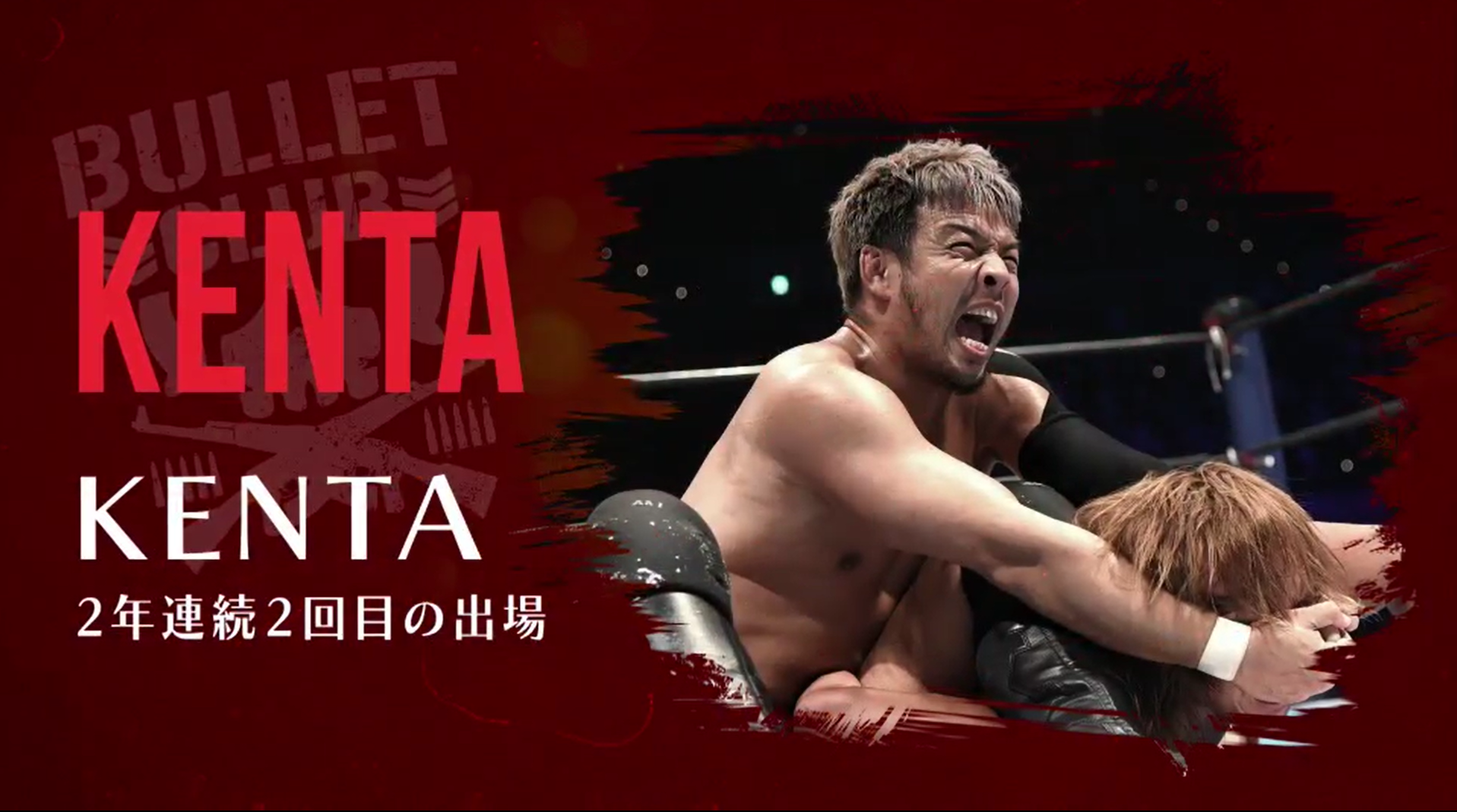 After a hot start to his campaign last year, KENTA’s G1 Climax didn’t end as successfully as he would have liked, but it certainly ended memorably. His final night betrayal of Katsuyori Shibata to join BULLET CLUB shocked the world, an led directly into what KENTA declared would be ‘his’ 2020, and his attack to Tetsuya Naito in the Tokyo Dome.

After defeat to Naito at New Beginning in Osaka Feberuary 9, KENTA’s year went on pause, as it did for many around the world. Yet BULLET CLUB’s hot acquisition was not going to let his promise slide. As soon as the opportunity of NJPW STRONG and New Japan Cup USA arose, KENTA seized it with both hands, and took hold of the IWGP US Heavyweight Championship right to challenge briefcase. Could he add to his hardware collection in the G1?

KENTA’s campaign ends with a bout against double IWGP Champion Naito some eight months removed from a memorable Osaka Jo main event. In the shadows of Osaka’s famous castle, KENTA didn’t emerge victorious, but he left a more than significant and lasting mark on the champion. It was all a badly bloodied Naito could do to eke out victory at New Beginning, and notably, in 35 minutes and 50 seconds; a significant percentage over the 30 minute time limit for group matchups in the G1. In the tournament setting, it would have been a draw, and there’s only one place to improve to from there. 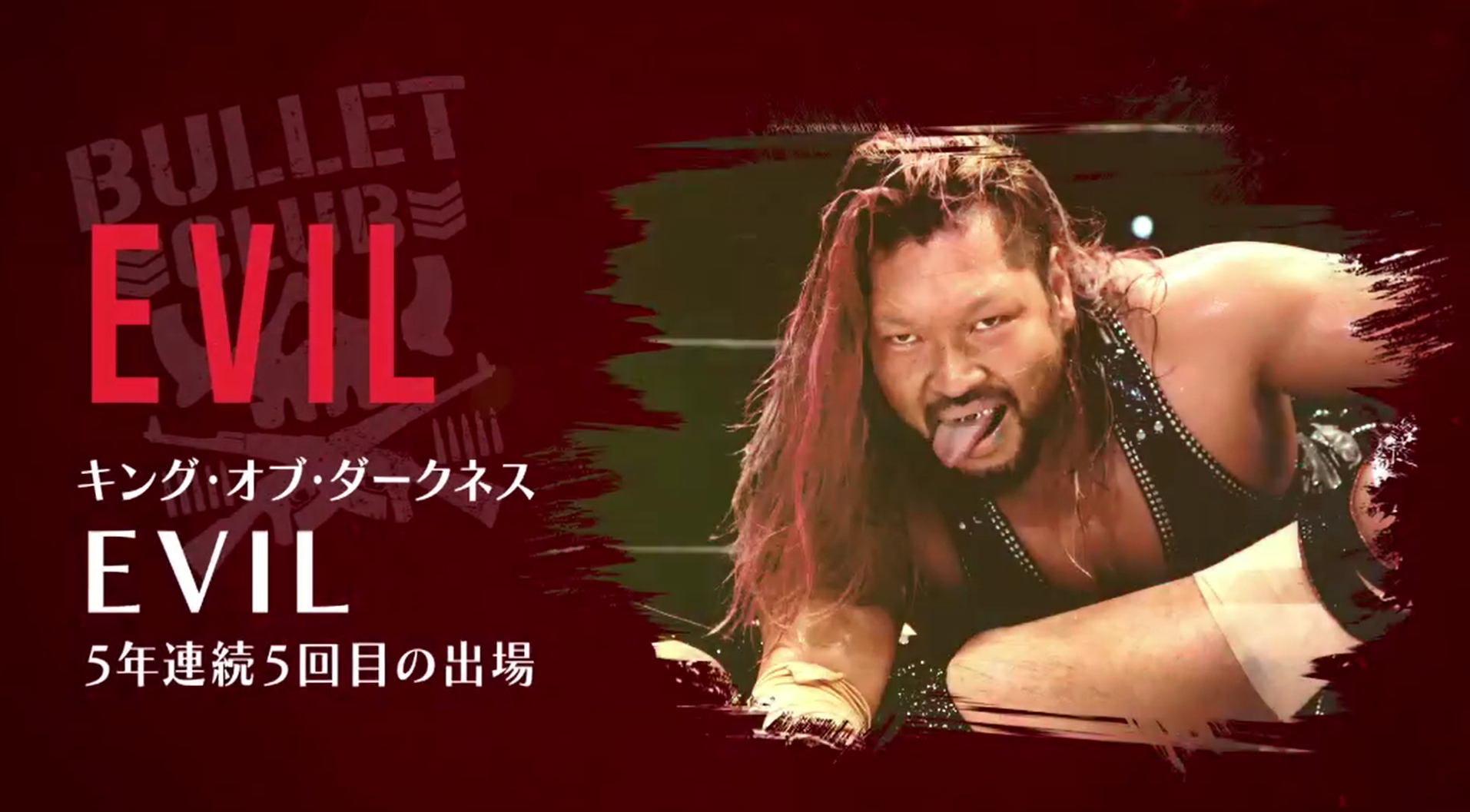 EVIL heads into his fifth G1 without the IWGP Intercontinental and Heavyweight Championships, but with a swagger and confidence that can only come from somebody who has beaten the best to stand at the top of the mountain. For the King of Darkness, G1 Climax 30 represents an opportunity to become the first individual to win the New Japan Cup and the G1 Climax in the same year, and in so doing shoot himself back into contention for Tetsuya Naito’s IWGP gold.

Already with increased focus and a pronounced mean streak in G1 Climaxes of the past, this year’s tournament will see focus deepened by a desire to taste gold once more, and mean streak accented by his current BULLET CLUB company. Once a darkhorse contender in the tournament of tournaments, EVIL has become thoroughbred favourite material.

EVIL’s New Japan Cup campaign ended with a defection from LIJ to BULLET CLUB after his victory in the Osaka final, but his tag team with SANADA was effectively ended days before. In a violent semi-final matchup with his then stablemate, steel chair assaults and low blows opened the door to victory and a final spot against Kazuchika Okada.

In the wake of EVIL’s defection, Cold Skull seemed conspicuously silent, but it was in Jingu that SANADA made his presence felt, evening the odds for Tetsuya Naito in the face of BULLET CLUB interference, and dropkicking a chair right into EVIL’s face. Now, in the critical last group match for either man, not just the most important two points of the tournament, but a deep personal grudge to be settled by men who know one another’s gameplan inside and out.