The grandest tournament in professional wrestling kicks off in Osaka 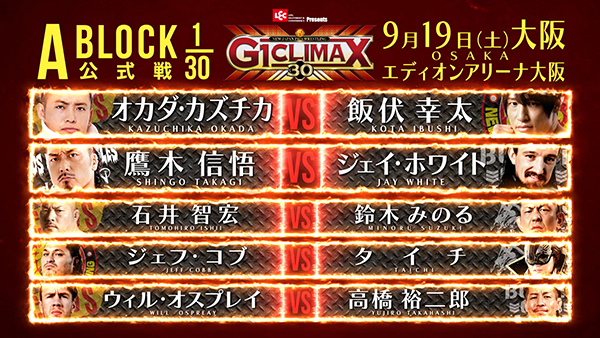 Wrestling’s greatest tournament is finally upon us! A huge month of action gets underway as 20 of the world’s best vie to be the one in G1 Climax 30!

Watch all of G1 Climax 30 live and on demand with NJPW World! (live Japanese commentary, English to follow) 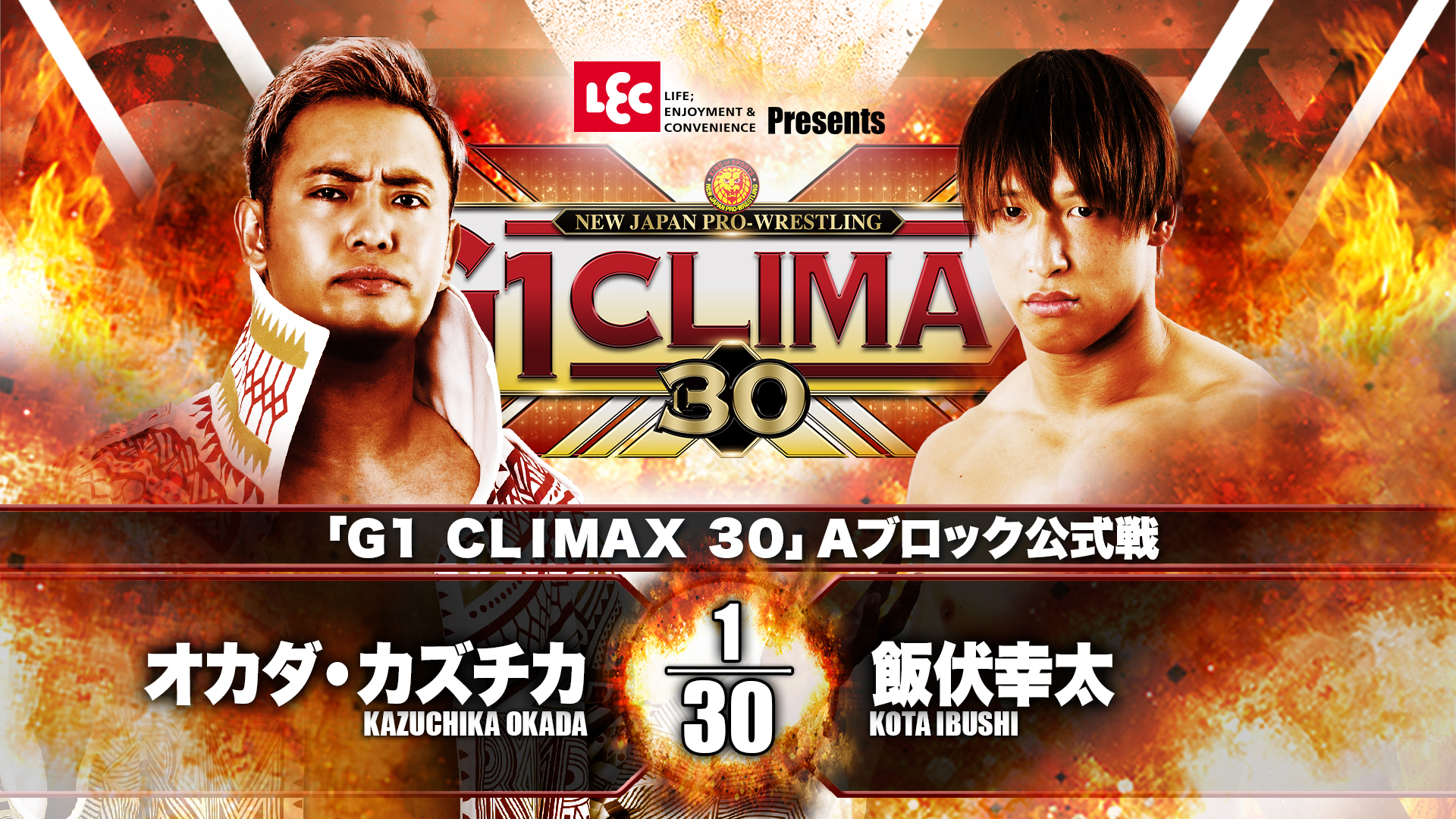 In 2019, it was the last match of both men’s A Block campaigns, but in 202o, it will be the first. Kazuchika Okada and Kota Ibushi had two outright classics in the span of five months between the last night of A Block competition in G1 Climax 29 and night one of Wrestle Kingdom 14, and while the score from those two matches is at 1-1, even Okada would admit that the Golden Star’s performance on January 4 was exceptional, stating later that in any other spot, in any other building, it was Ibushi’s match, but experience in the biggest match of the year was what gave the Rainmaker the edge.

So what of Osaka and the first night of the G1? Certainly neither man has a favorable record in the city this year; it was in Osaka that Okada lost the New Japan Cup final to EVIL, and Ibushi and Tanahashi lost the IWGP Tag Team Championships to Zack Sabre Jr. and Taichi. Those losses saw both men take a step back from main event singles competition, but both have admitted that G1 represents a chance to reset and begin a drive to the highest level on the biggest stage. This will be an impossible match to call, and an impossible one to miss. 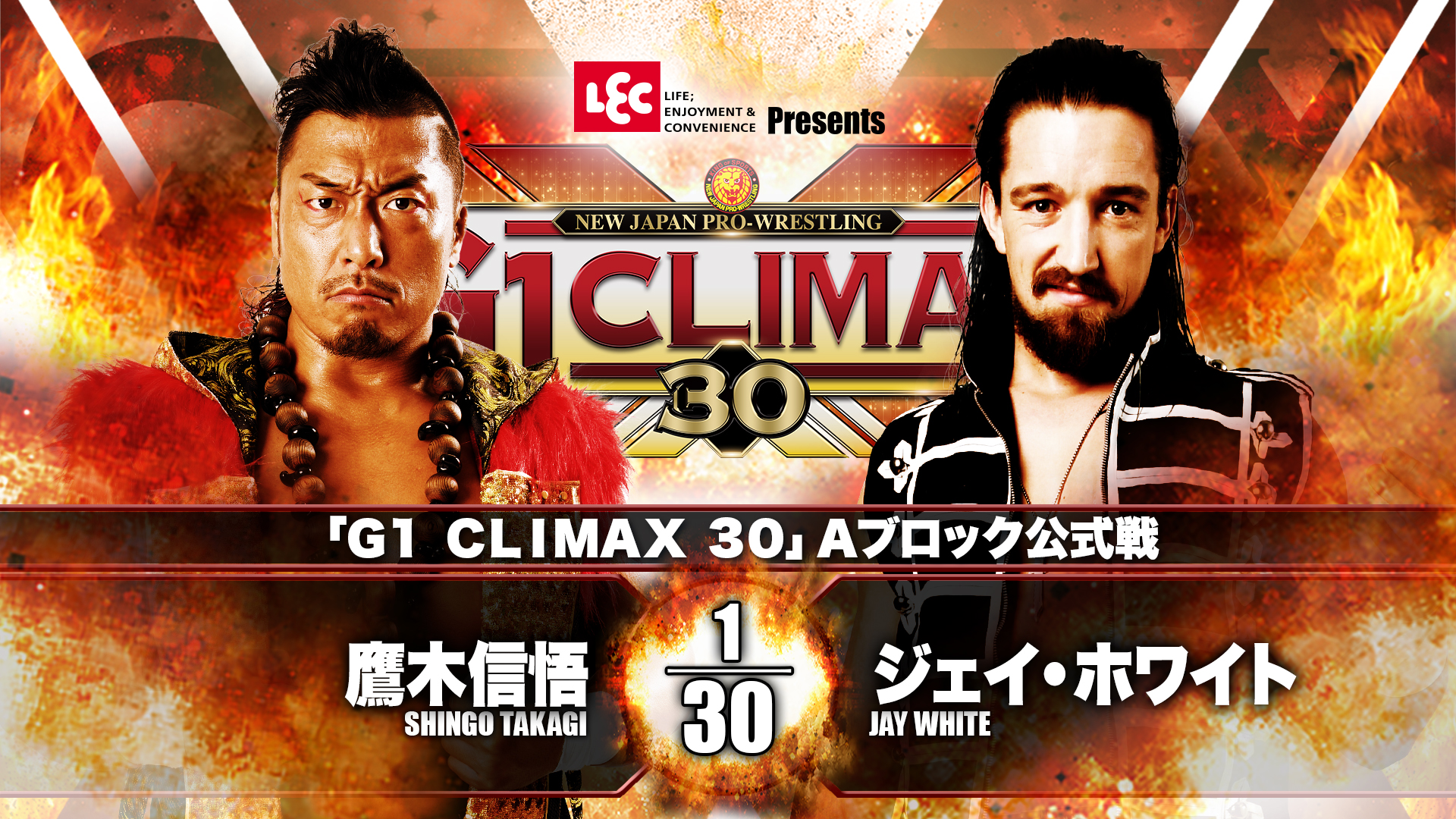 2019’s runner-up Jay White heads into G1 Climax 30 relatively fresh, only a handful of matches under his belt in NJPW STRONG where the master manipulator of BULLET CLUB has continued to assert his group’s dominance on Friday nights. In Japan meanwhile, Shingo Takagi has had a thrilling NEVER Openweight Championship reign, but one curtailed by Minoru Suzuki in Jingu Stadium. While White is convinced that Takagi’s output in the last few months isn’t enough to make him a threat, he has to know that if Shingo has a chance to throw against the Switchblade, he could well land the biggest knockout blow of his NJPW career to date. 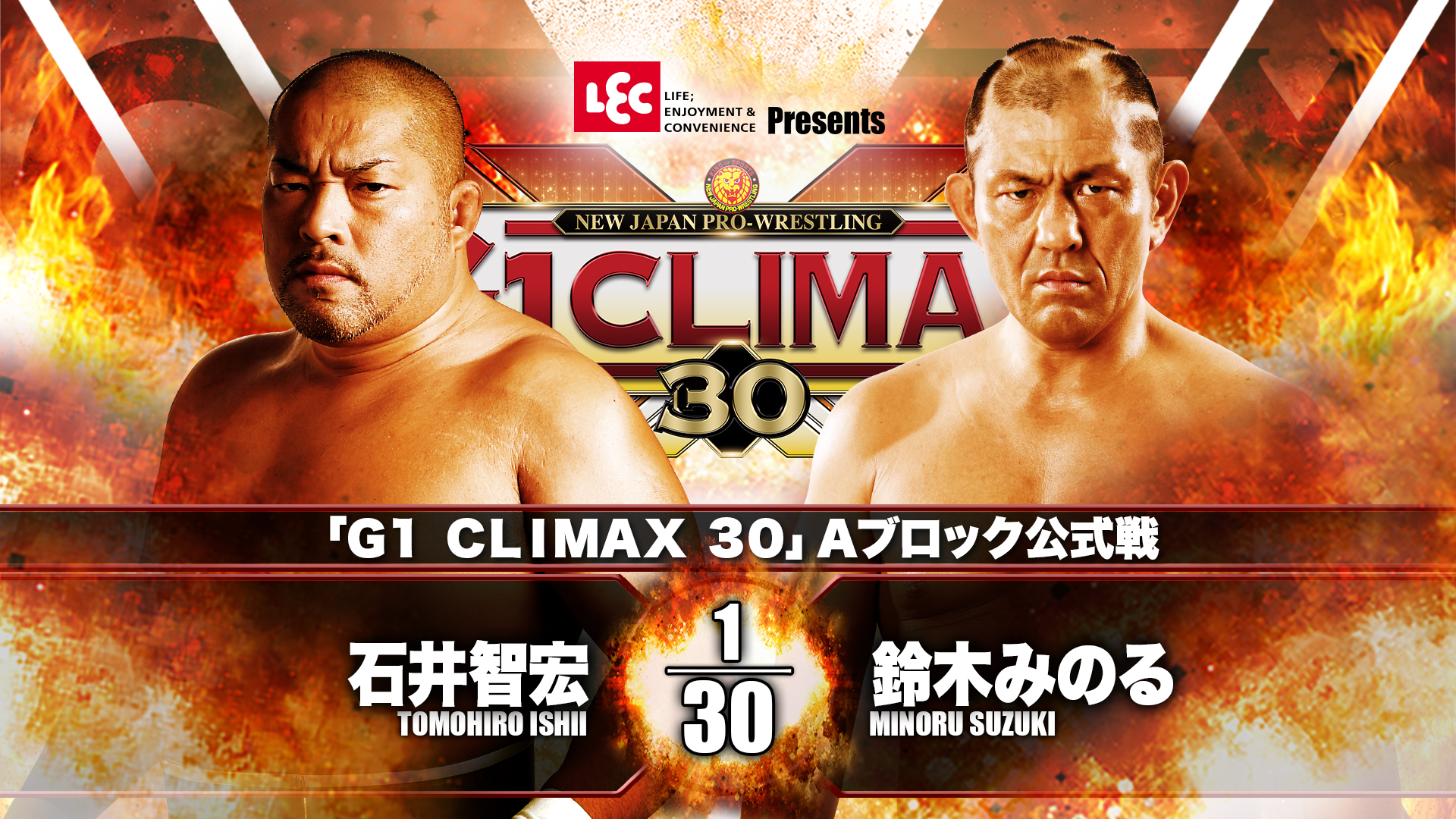 The third match of the night sees a continuation of a bitter rivalry between two of the hardest hitters in professional wrestling. In 2018, Minoru Suzuki and Tomohiro Ishii battled with unbelievable intensity over the British Heavyweight Championship in an international war that spanned both the UK and Japan. Now in 2020, both men hold NEVER gold; Ishii is one third of the NEVER Openweight 6-Man tag Team Champions, while Suzuki is the new NEVER Openweight Championship. The never say die hard hitting spirit of the title certainly represents both men to a tee, and there will be little to no give in either men on night one of the G1. This will not only be the start of each man’s campaign, but could also be the start of a new chapter in a violent feud. 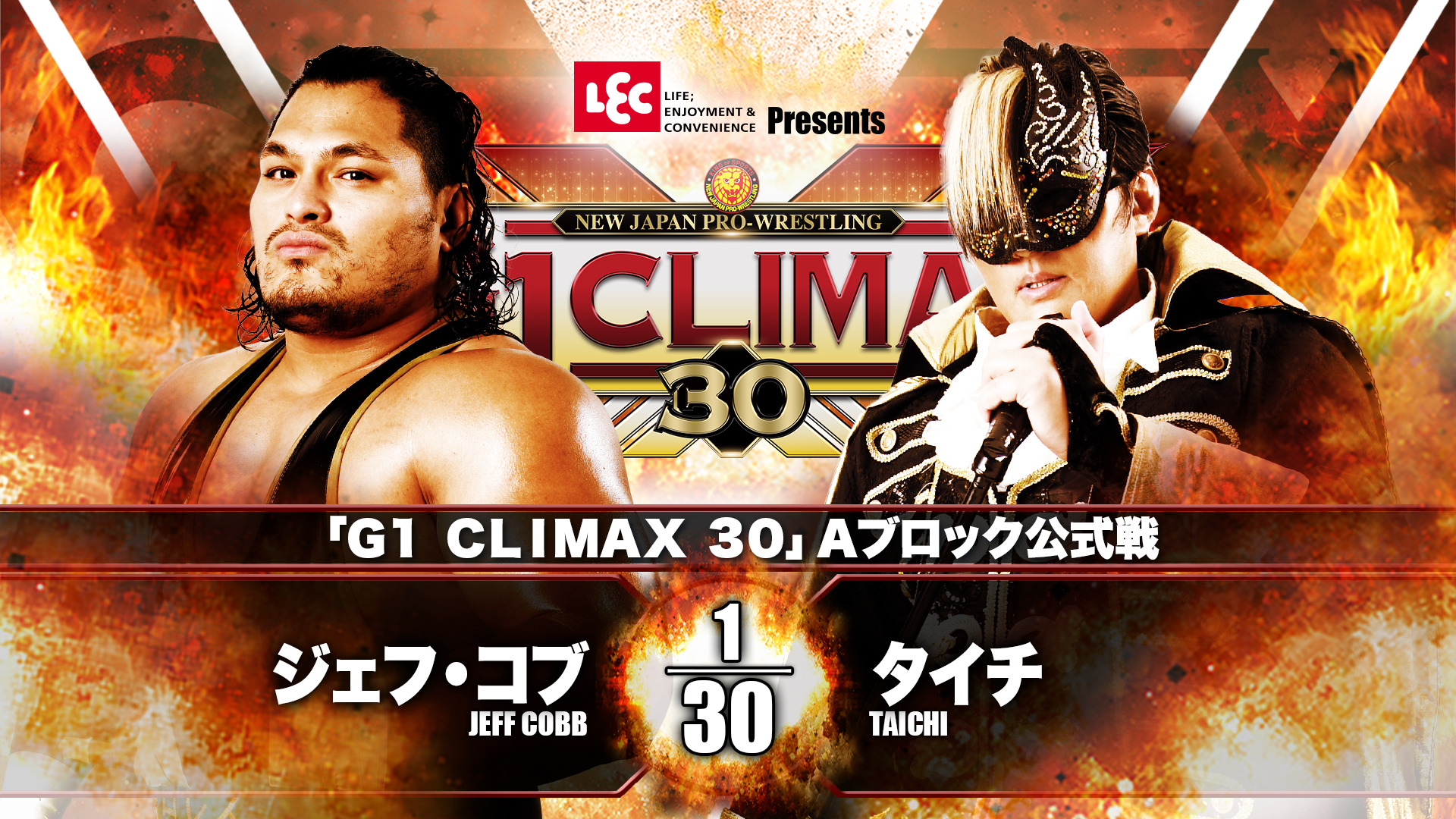 Jeff Cobb first locked horns back at Dontaku in 2019, where after the aid of Yoshinobu Kanemaru and Miho Abe, Taichi was able to pin ‘Jeff Hog’ and capture NEVER Openweight Championship gold. Later that year in the G1, Taichi had less int he way of assistance, and Cobb got his revenge. How will this rubber match go? Certainly form favours Taichi. Suzuki-Gun assists or not, Taichi has been more aggressive than ever in 2020, and has scored significant singles and tag team victories. For Cobb, the anguish of controversial heartbreaks against KENTA in New Japan Cup USA and Fighting Spirit Unleashed will be playing on the Olympian. That said, it could provide him with all the motivation he needs; certainly Cobb will be in no mood for antics in Osaka. 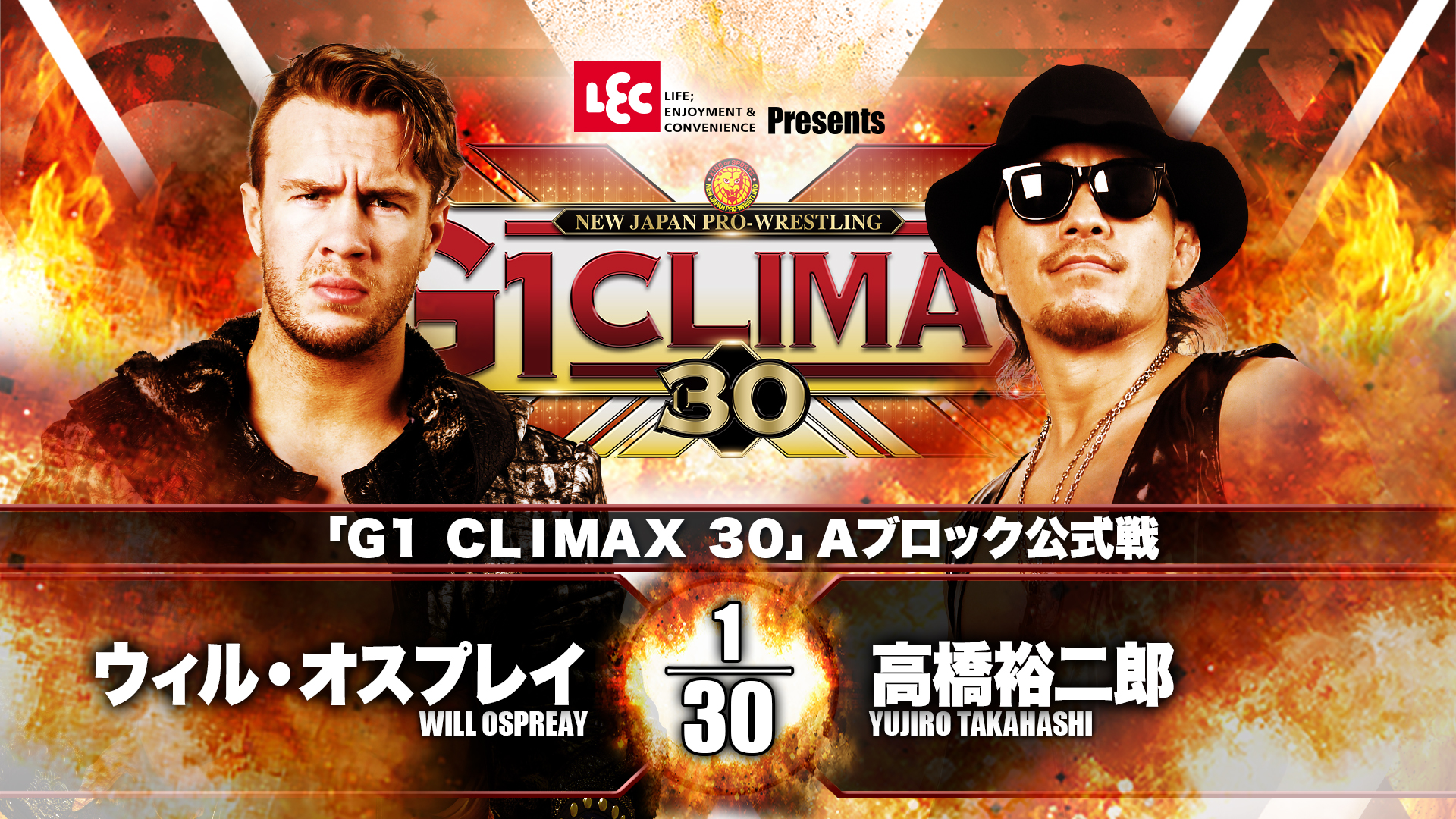 G1 Climax 30 will officially get underway with Will Ospreay facing Yujiro Takahashi. Over six months removed from his last match in the cerulean blue, Ospreay will doubtless be highly motivated on his return, but so to will a Yujiro starting his first G1 in five years. Who scoops the first two points of the tournament? 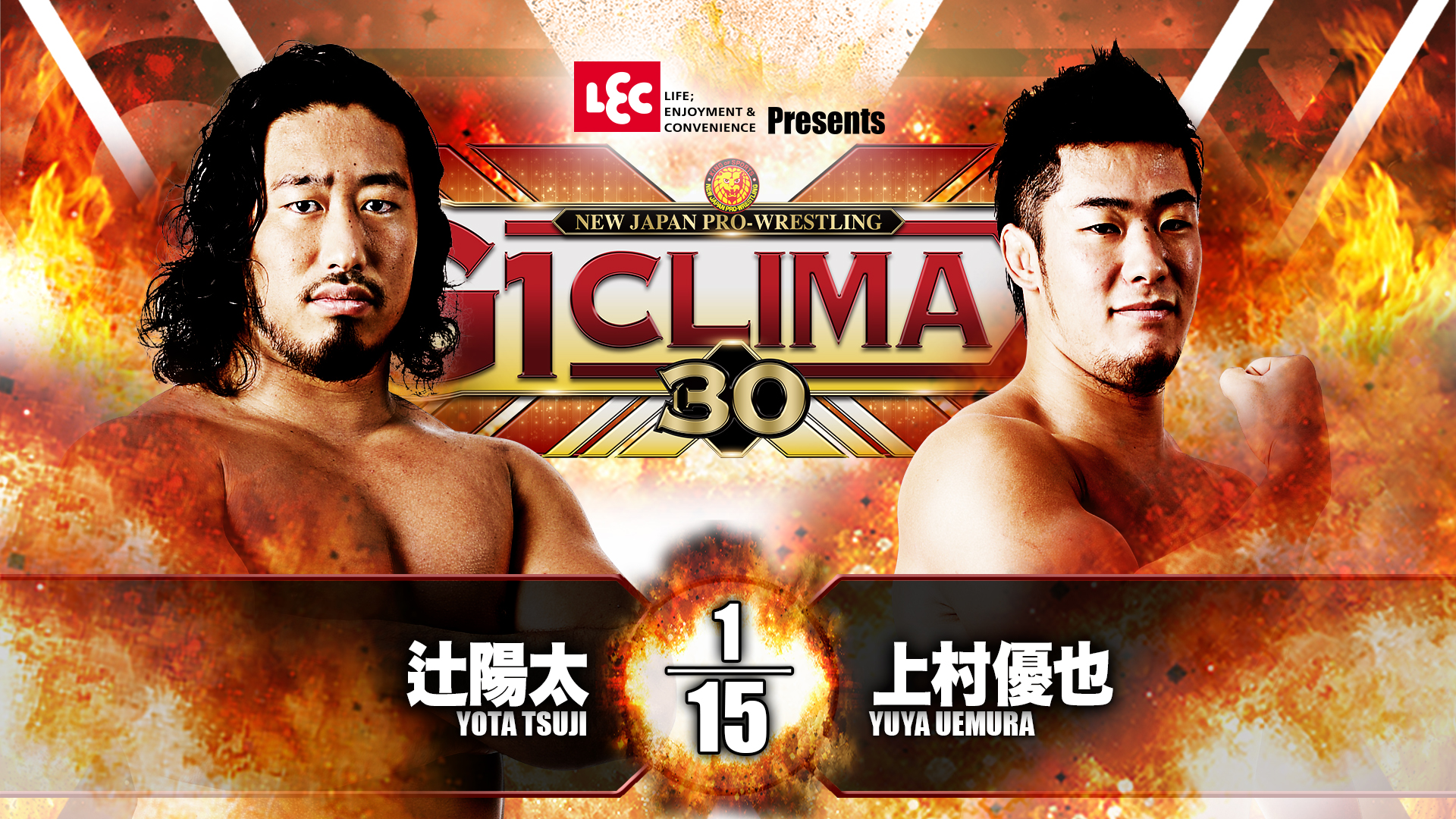 All through the G1 Climax tour, action will kick off each night with some combination of Yota Tsuji, Yuya Uemura and Gabriel Kidd in singles action. Showing the best of NJPW’s future before the best of the present do battle in the G1, this could become an unofficial ‘C Block’ for the tournament, and certainly the three men involved will be keeping close track on win and loss records over the next month.

That record does not favour Uemura of late against Yota Tsuji. As Tsuji has extended his lead over Dojo rival Uemura of late, Uemura will be eager to redress the difference.