B Block gets started in Osaka 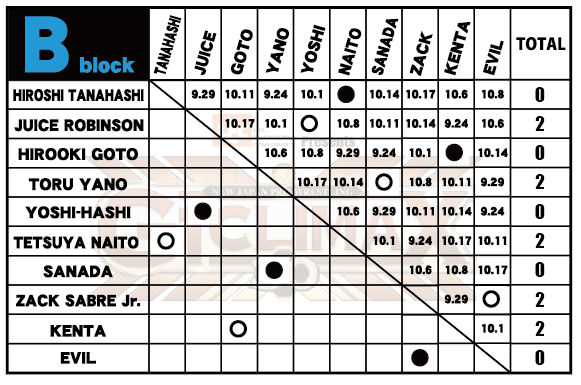 Less than 24 hours after A Block got underway, September 20 saw B Block action get started, with a victorious Tetsuya Naito in the main event standing tall over Hiroshi Tanahashi as he promised to return to Osaka for Power Struggle with both IWGP titles and as the G1 winner. 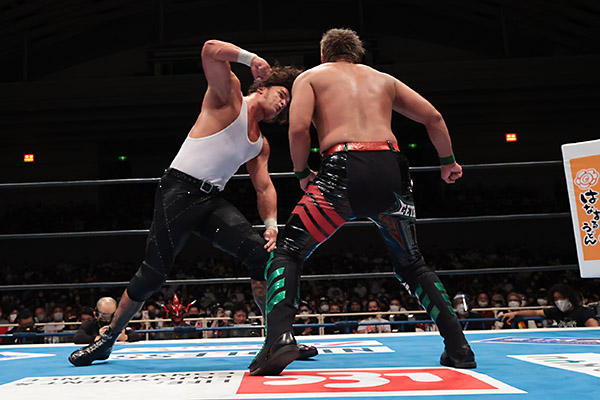 Juice Robinson and YOSHI-HASHI had the first official B Block match of the tournament. The new look Juice tried to take control early with a hard chop to thechest of YOSHI-HASHI, who responded with a head scissors whip and headlock takeover.  When YOSHI-HASHI tried to shoulder tackle his opponent though, Juice used his size to his advantage, taking the CHAOS member down and landing a big senton.

Juice was able to counter a Bunker Buster from YOSHI-HASHI, but a Headhunter allowed the NEVER 6-Man champ to take control, sending chops into the corner and piling on the pressure. When Juice went for his signature jabs, YOSHI-HASHI cut him off and went for a closed fist of his own, but Juice was able to counter into a Full Nelson slam as the crowd came alive, a Cannonball following for two.

An overconfident Juice took too much time conducting the crowd to stamp their feet, paying with a corner powerbomb and lariat from YOSHI-HASHI. The Headhunter closed in on victory and attempted Kumagoroshi, but Robinson kneed out. Robinson kicked out of a second attempt, but got caught in a Butterfly Lock. YOSHI-HASHI modified the hold into a Cobra, but with Osaka willing him on Juice stood, only to be met by a backcracker. 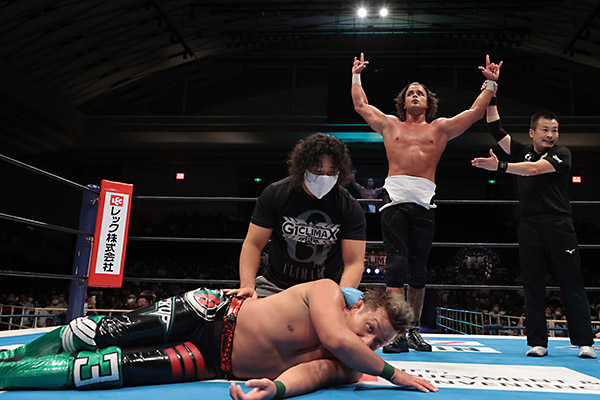 A swanton from YOSHI-HASHI only got two, as Juice refused to lose. It was all Robinson could do to elbow out of a Karma attempt, but an instinctive lariat brought YOSHI-HASHI down shortly afterward. Juicebox followed, and Juice wanted Pulp Fiction, countered first with a roll-up for a nearfall before two closed fists and a second attempt secured victory. 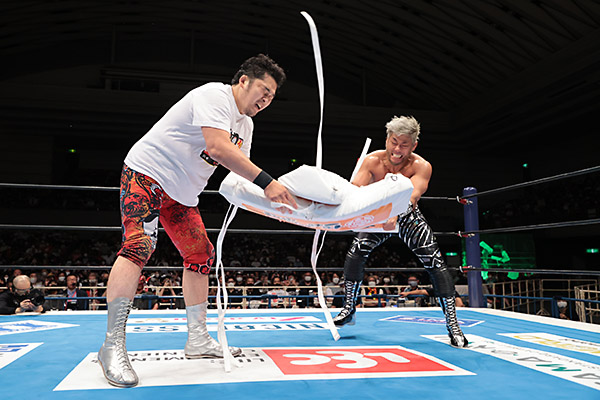 Toru Yano and SANADA were next up. Yano failed the referee’s check early, as Kenta Sato found two rolls of tape in his knee pads before the two men finally locked up; SANADA finding a third roll in the thief’s tights.

When Yano went to plan B of removing the turnbuckle pad, he was caught in a rolling cradle that scored a two for SANADA and disoriented Yano. The Master Producer tried to bait SANADA to the outside, but Cold Skull was not easily tricked, forcing Yano to break the referee’s count, and leading to a turnbuckle pad duel.

More dangerous than the pads were the exposed steel buckles, and Yano sent SANADA ringing off the neutral corner, but couldn’t follow up as Cold Skull sent Yano outside and landed a plancha. The LIJ member walked Yano up the aisle and looked for a replay of their last two encounters by placing his opponent in a Paradise Lock, but when a ringside Uemura tended to Yano, SANADA found himself tied to the Young Lion and Yano rushed back to the ring for the countout win. 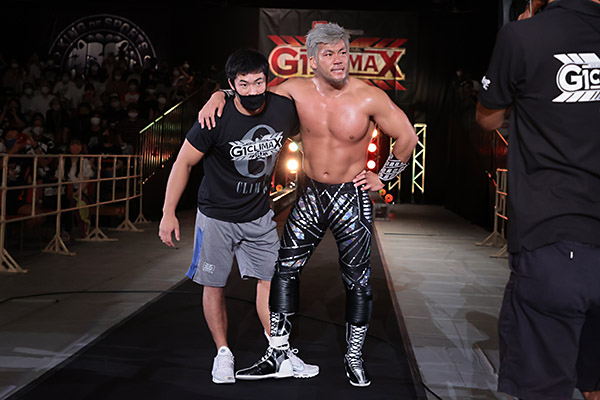 After the break, KENTA made his return to Japanese action after a seven month action, facing his January 5 Tokyo Dome opponent Hirooki Goto. Knowing the Osaka crowd was not allowed to vocally boo, the New Japan Cup USA winner antagonised ringside fans, before antagonising Goto with a handful of hair, bailing outside once more when the angry warrior tried to take control. 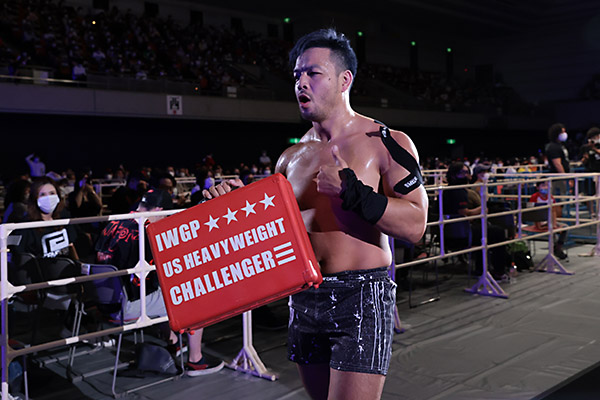 Goto was able to get his hands on the BULLET CLUB member briefly, but it didn’t last, KENTA dropping his opponent over the top rope and sending his shoulder into the ringpost outside. Seemingly looking for a Game Over submission win, KENTA went to work with kicks and a Fujiwara armbar tearing at the afflicted body part.

His right arm useless, Goto was able to fire back with a Bulldog from his left side, but Ushigoroshi would be countered by a KENTA powerslam, before a tornado Gunstun and flying lariat found their marks. KENTA fired in kick after kick to fire Goto up, but the Fierce Warrior instinctively tried to punch at KENTA, leading to a counter into Game Over; Goto made the apron where he was choked by his opponent, but an armbreaker over the top rope finally brought Goto an opportunity.

Working over the newfound crack in KENTA’s armour, Goto clutched the wrist to hit the Hell Wagon suplex, damaging the left arm further, but KENTA responded with a DDT and a Green Killer. A corner dropkick followed for KENTA and a double stomp and Busaiku Knee got two each as the BULLET CLUB member pushed the advantage. 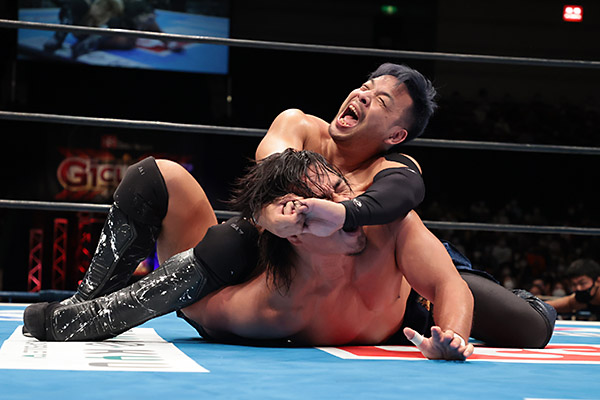 Goto was able to block the Go2Sleep however, and withstood hard head shots to hit Ushigoroshi and the Rising Dragon armbar. As KENTA escaped however, both men struggled for their signature holds, KENTA eventually able to lock in Game Over with a kick from the mat to Goto’s hurt shoulder. KENTA rolled Goto back to the middle, and a tap out was the inevitable result. 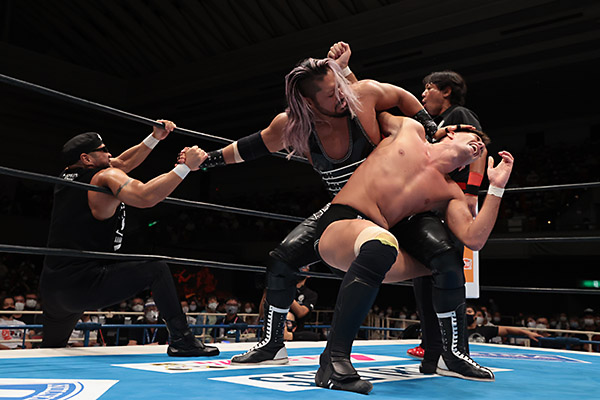 As the fifth match of the evening got underway, EVIL’s cornerman Dick Togo got in Zack Sabre Jr.s face, and provided the distraction necessary for a vicious assault from the former double IWGP champ. A sidewalk slam on the floor followed and EVIL pulled a lot of tricks from a dark and villanous hat, producing a steel chair and pulling the turnbuckle pad off the blue corner.

Not normally used to encouraging the Briton, the Osaka crowd started to clap for ZSJ to recover, but his comeback showed a rare lack of forethought, strikes leading to a quick eye rake, and an abdominal stretch attempt too ambitious for EVIL’s giant shoulders. With back hurt, Sabre quickened the pace to buy some time, and with snapping holds and a hit and run approach, did some damage to the King of Darkness, baiting the big man into a missed senton as the crowd came alive, and looking for the abdominal again, converting into a Cobra Twist before EVIL took the ear of ZSJ for long enough to hit a fisherman suplex.

A top rope brainbuster from EVIL seemed to sow things up at the ten minute mark, but an EVIL attempt was countered into a double leg Nelson pin that came as close as one could get to three. ZSJ looked for Clarky Cat, but Dick Togo hopped on the apron; he was kicked away by the Briton, but enough time was had for EVIL to shove Sabre into the referee and bring in the Spoiler for the two on one advantage. 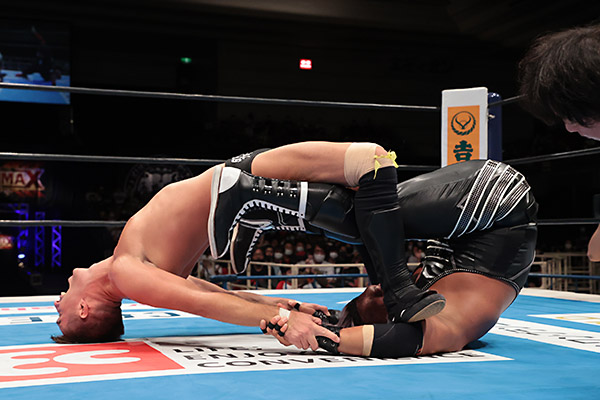 ZSJ countered a Magic Killer attempt by the two BULLET CLUB representatives, and blocked a low blow into an akle lock, but EVIL rolled through and sent his opponent into the steel buckle. Darkness Falls followed for EVIL, garnering two, but as EVIL looked for the finishing blow, ZSJ was able to score a flash European Clutch, getting the three in the biggest upset of the tournament thus far. 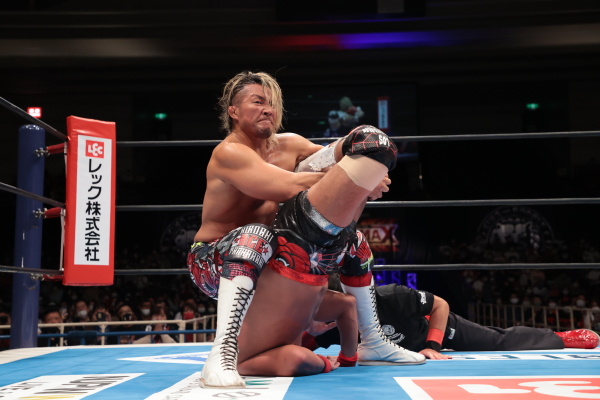 The main event of the evening saw Hiroshi Tanahashi in singles action against Tetsuya Naito for the first time in three years. High paced chain wrestling started the match, with Naito and Tanahashi staring one another down in a standoff. With a wry smile, it was Naito who threw the first strike, but Tanahashi would dropkick out the left knee of Naito, finding his early target with an inverted Dragon Screw and Indian Deathlock that sent Naito outside to walk it off.

When Tanahashi followed Naito outside, El Ingobernable was able to bait the Ace into a missed senton, and Naito took control with shots into the outside fencing. Electing to target the Ace’s neck, a full leg Nelson hold and basement dropkick created the strain and whiplash necessary to give Naito full control.

Tanahashi was able to counter a corner combination however, and the Ace of old was certainly on display with a flipping senton scoring two and a Dragon Screw sending Naito crashing into the ropes. Tanahashi went high risk, and scored the Highest Fly attack, leaping from the top rope all the way to the floor, and stayed on the knee of Naito as he came back in with a Dragon Screw over the ropes.

Tanahashi looked for the Texas Cloverleaf that had brought him victory over Naito at Dominion three years earlier, but Naito sensed the danger, fighting out and landing a desperation Spinebuster on one knee. A Frankensteiner followed from the top, but Tanahashi rolled through, finding the Texas Cloverleaf on the second attempt, Naito barely making the bottom strand. 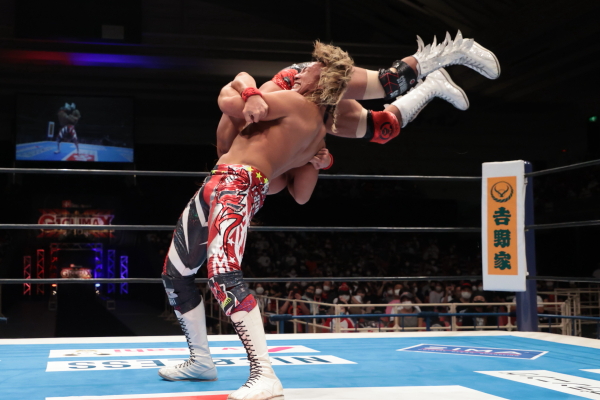 Bringing moves from his past back to the fore, a Straightjacket German for Tanahashi followed for two, but Naito avoided a Slingblade to hit a Compo kick and follow with a swinging DDT. As the two men reset just past the 20 minute mark, Tanahashi and Naito threw bombs, Naito bringing Tanahashi to the mat with a desperation back elbow. The double IWGP Champion was relentless as he repeated the blows, and hit Gloria for a two count, but Tanahashi was able to grit his teeth and hit three successive Twist and Shouts, and a Slingblade counter to the Destino at 25 minutes. A second Slingblade followed, but Naito avoided the High Fly Flow, as the Ace crashed into the canvas.

Tanahashi desperately hung on, blocking Destino, but Vaentia followed and another Destino found the mark for two opening points next to Naito’s name. Post match, Naito stated that although Kobe and Osaka’s upcoming G1 events would be A Block matches, he promised to return with both titles in November for Power Struggle. 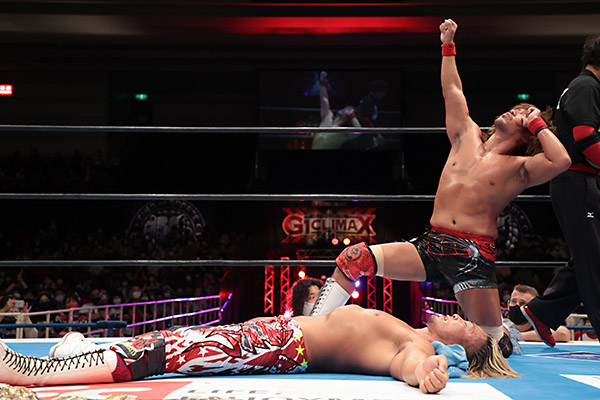