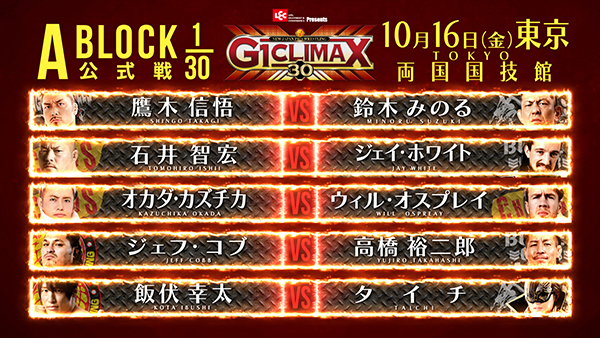 The grueling journey is coming to a close as G1 Climax 30 arrives in Ryogoku Sumo Hall for the final three nights of the world’s greatest tournament. In the final night of A Block competition, who will book their place in Sunday’s final? With Tuesday’s Hamamatsu results taken into account, the match order is as follows.

If White wins, he is through to the G1 final. 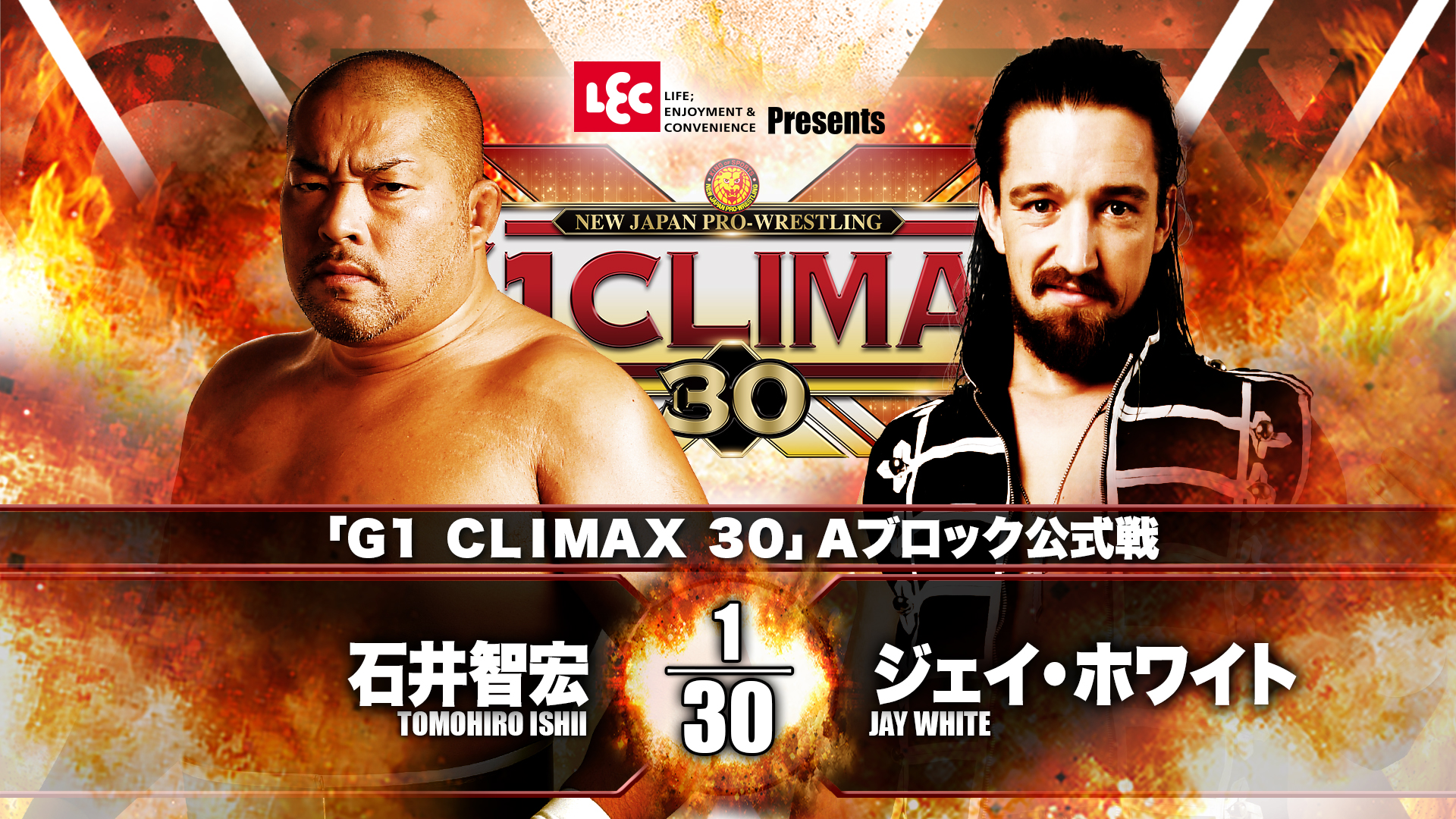 Jay White might be tied at the top of the table with Kazuchika Okada and Kota Ibushi at 12 points, but he effectively leads the block. In NJPW tournaments, if wrestlers are tied on point scores, their record against one another is taken into accoung, and White has beaten both Okada and Ibushi which means that a tie after tonight means he wins. In essence then, White is fully in charge of his own destiny, the only wrestler on tonight’s card where that case applies and as such his match with Ishii tops tonight’s card.

Before the G1 tournament, White was completely confident about his encounter with the six point scoring Ishii. ‘All he wants to do is stand and trade strikes,’ the Switchblade commented, ‘I’m smarter than that’. Certainly smarts, and assists from Gedo has taken Jay to where he is now, and should pit him as a heavy favourite. Yet Ishii thrives in this kind of an environment, and more importantly, has won their only singles encounter to date, neutralizing both tactical edges and Gedo’s presence to score a win in last year’s tournament. Ishii also holds a positive career win/loss record of 4-3 on the final night of league competition and would take great delight in furthering that edge, as well as helping one of his CHAOS teammates in Okada or Will Ospreay to the finals in the process.

Ibushi needs to win, and for White to lose 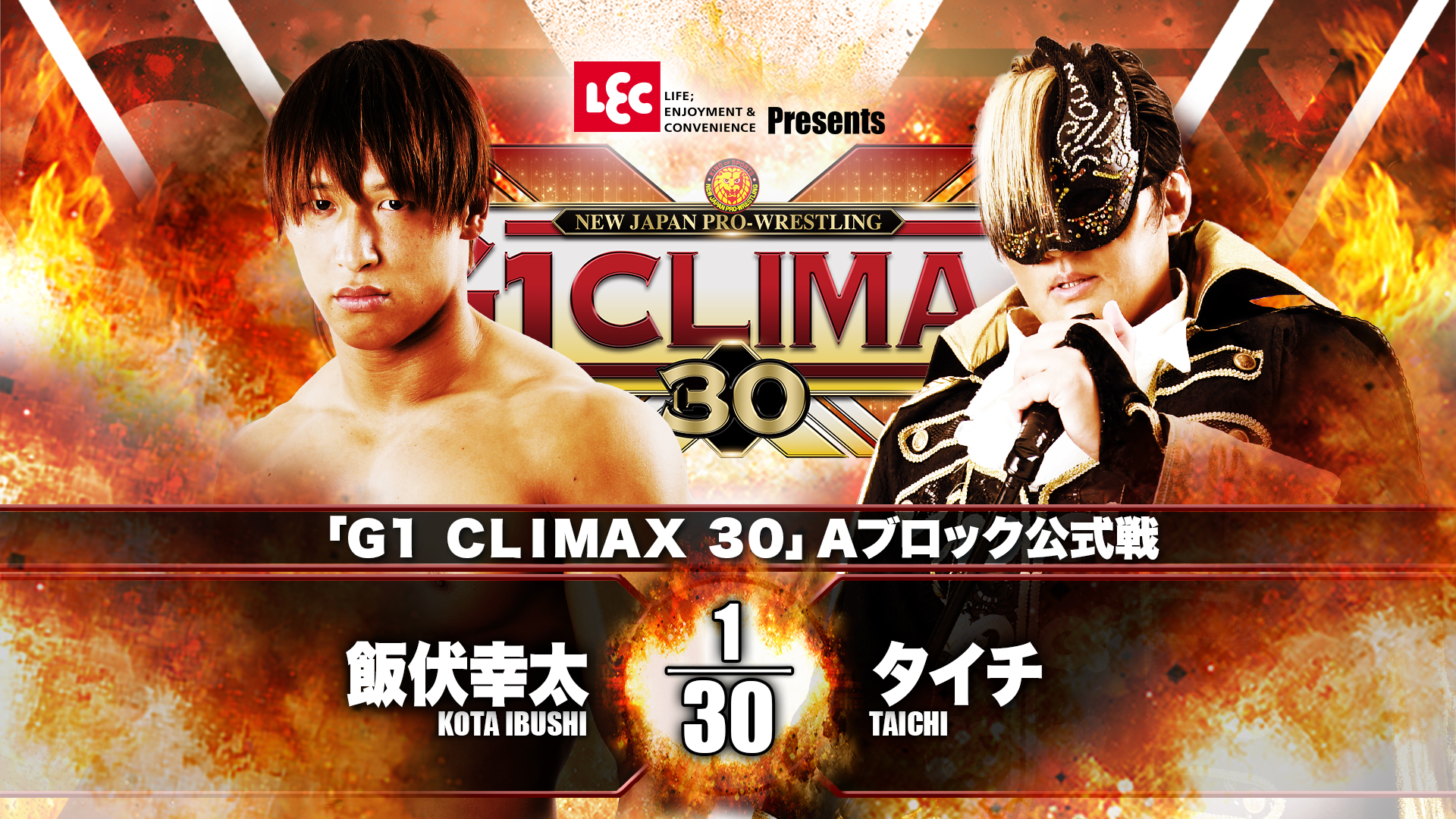 With a win over Okada, but a loss to Jay White, Kota Ibushi is in an effective second place in the A Block standings, and needs the help of fate; or Tomohiro Ishii at least. Until the result of the main event is rendered however, Ibushi will be doing all that he can possibly do, and that means beating Taichi.

Taichi has been a nemesis of Ibushi’s all through the summer and into the autumn. It was in the New Japan Cup that Taichi scored a contentious victory over Ibushi in their first singles match against one another since both transitioned to heavyweight competition. From there, Taichi and Zack Sabre Junior made Ibushi and Hiroshi Tanahashi’s lives a misery when they won the IWGP Tag Team Championships from Golden ☆ Ace and repeatedly asserted their superiority as a tag team.

During their summer feud, Taichi needled Ibushi, saying that he was the only one with talent in the team, and that Tanahashi was well past his prime. Trying to coax Ibushi over to the Suzuki-Gun side was unsuccessful, as Taichi inspired Ibushi to carry the team to a title rematch in Summer Struggle, but the pair still fell short. Can Ibushi finally gain valuable revenge over Taichi in Ryogoku? If he can he might be in line for an unprecedented third consecutive G1 final; if not, his fate may be sealed.

Okada needs to win or draw, and for White and Ibushi to lose

Ospreay needs to win, and for White and Ibushi to lose to force a three way tie. 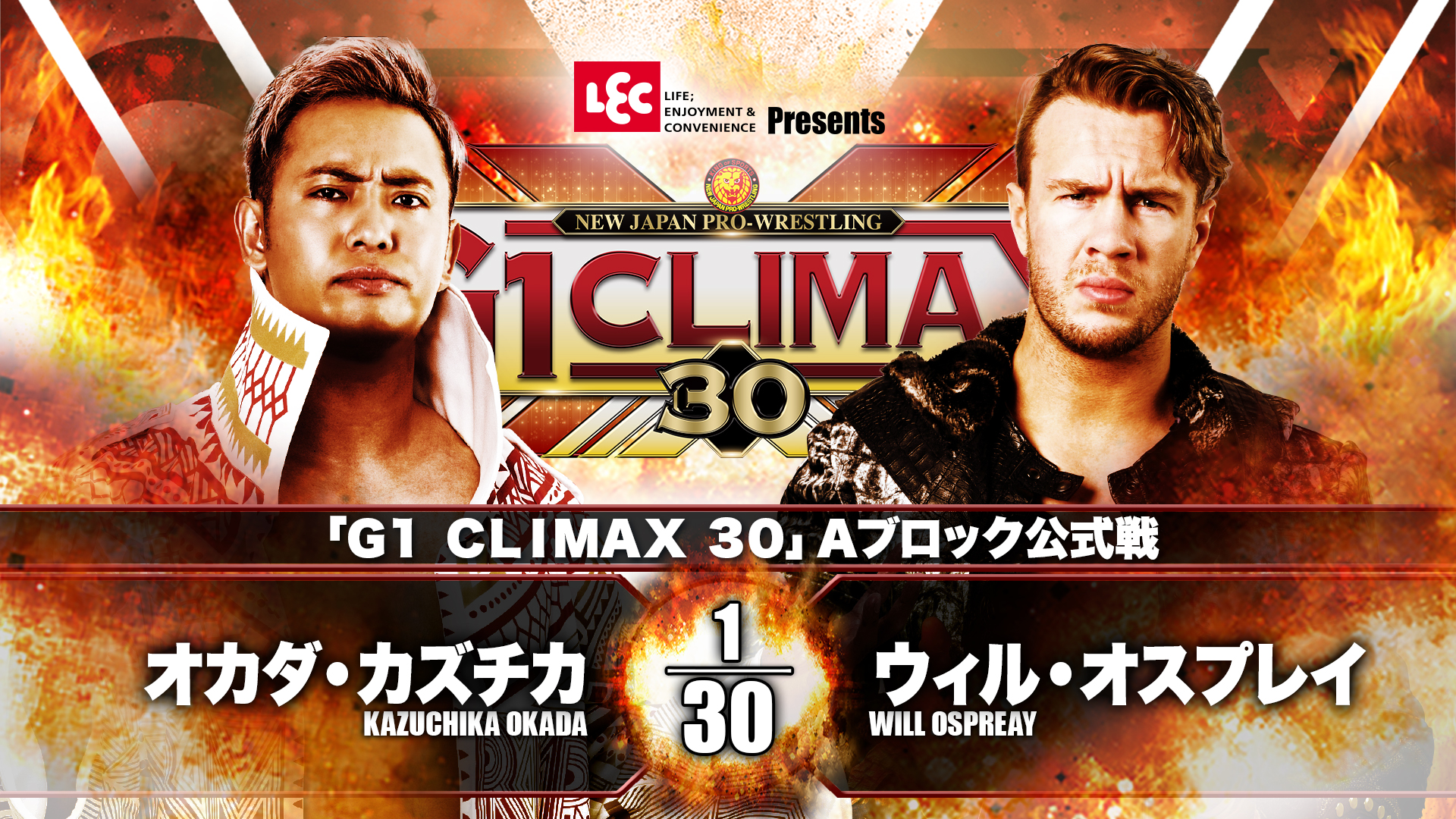 Kazuchika Okada walks into Ryogoku Friday night in the weakest position of the three at 12 points, having lost to both Ibushi and Jay White. After a shaky start, Okada has found fine form in a tournament where he set himself the challenge of adding strings to his bow, and cementing the Money Clip as a submission hold to be feared. Stirring main event victories over Shingo Takagi and Tomohiro Ishii have followed in back to back nights for Okada, but for the man who has conquered all there is to conquer in NJPW at just 32 years of age, one main event has eluded him for many years.

Okada has not made the finals of the G1 since his second tournament victory in 2014, and if he is to take part in his third career final this Sunday, he will do so after a lot of help from Taichi and Ishii this evening. Indeed, the final block day is not historically kind to Okada; while he is always alive heading into the final weekend, his record of 2-4-2 at the end of league competition is not one to inspire confidence.

For Ospreay, his one and only G1 campaign closer was last year in Nippon Budokan, and a deeply significant victory over Hiroshi Tanahashi that set him on his path to the heavyweight ranks. Ospreay’s victory was a mandate of sorts then, and with hopes of the G1 final very dim indeed and reliant on secondary tiebreaks, Ospreay may have a second mandate in mind and deep personal pride more prominently in mind than the G1 trophy.

In four encounters, Ospreay has never beaten ‘big brother’ Okada. With their first match together gaining Okada the attention of the CHAOS leader and his personal endorsement for his NJPW debut, Ospreay owes much to the Rainmaker, but that big win is an elusive goal that shines just as brightly as any trophy. 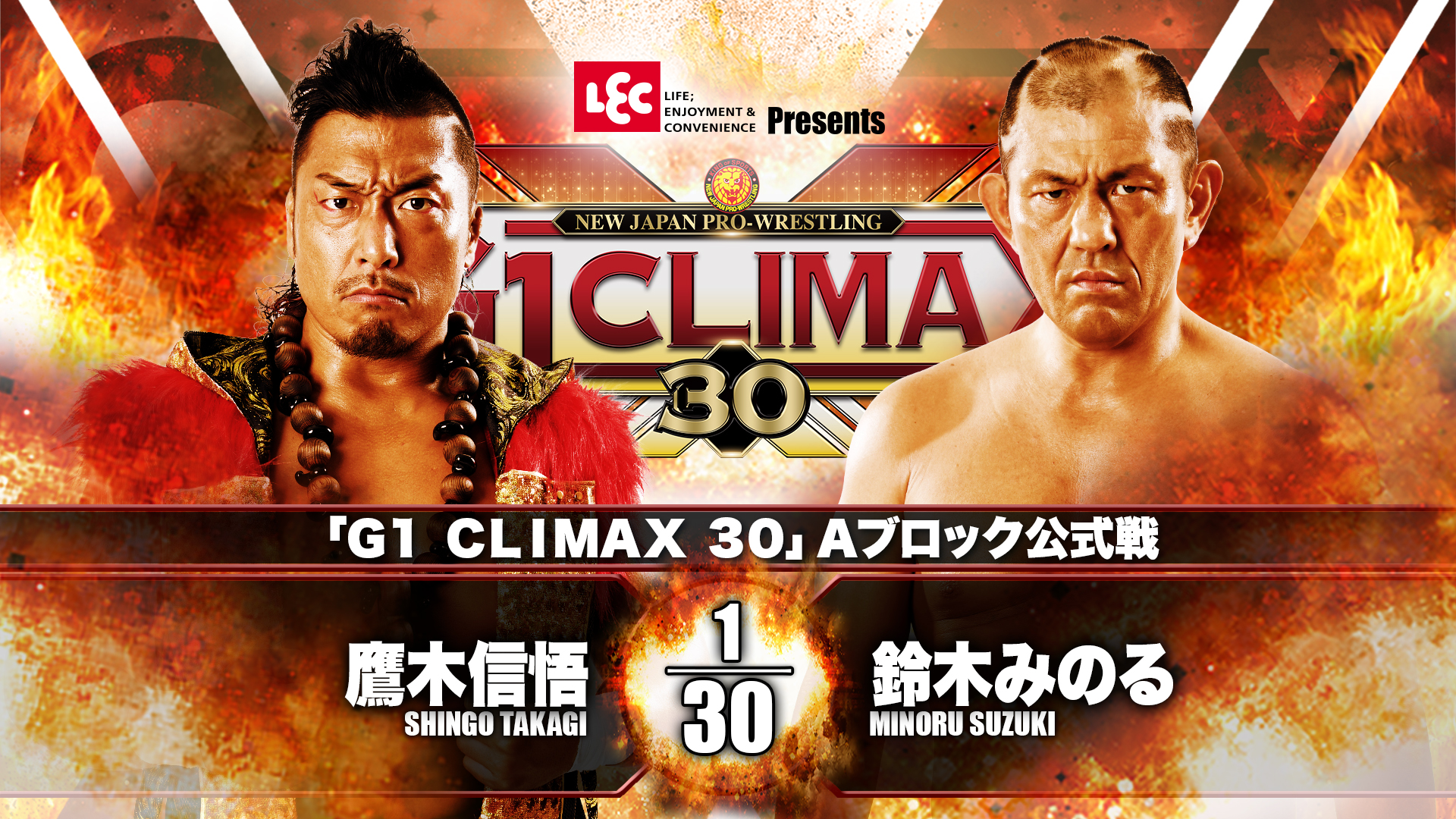 For Minoru Suzuki this G1, a hot start gave way to difficult opposition toward the end of his campaign, and hard fought losses to the principal players in tonight’s top three matches. Shingo Takagi had very impressive victories over the likes of Ibushi and Ospreay, but consistency was his enemy in this campaign. Where they scooped their six points though is irrelevant; both men are out of the running when it comes to G1 Climax 30, and both have to deal with the ignominy of being guaranteed a  negative W:L ratio.

So, it comes down to this in Ryogoku; a violent battle for violent battle’s sake; something both men enjoy a great deal. Shingo Takagi would also enjoy a victory over the current NEVER Openweight Champion a great deal; his loss at Summer Struggle in Jingu is still painful to the Dragon. Scoring a win over Suzuki tonight would be key to Takagi staking a claim for a championship rematch; Suzuki would much rather call his own shots. 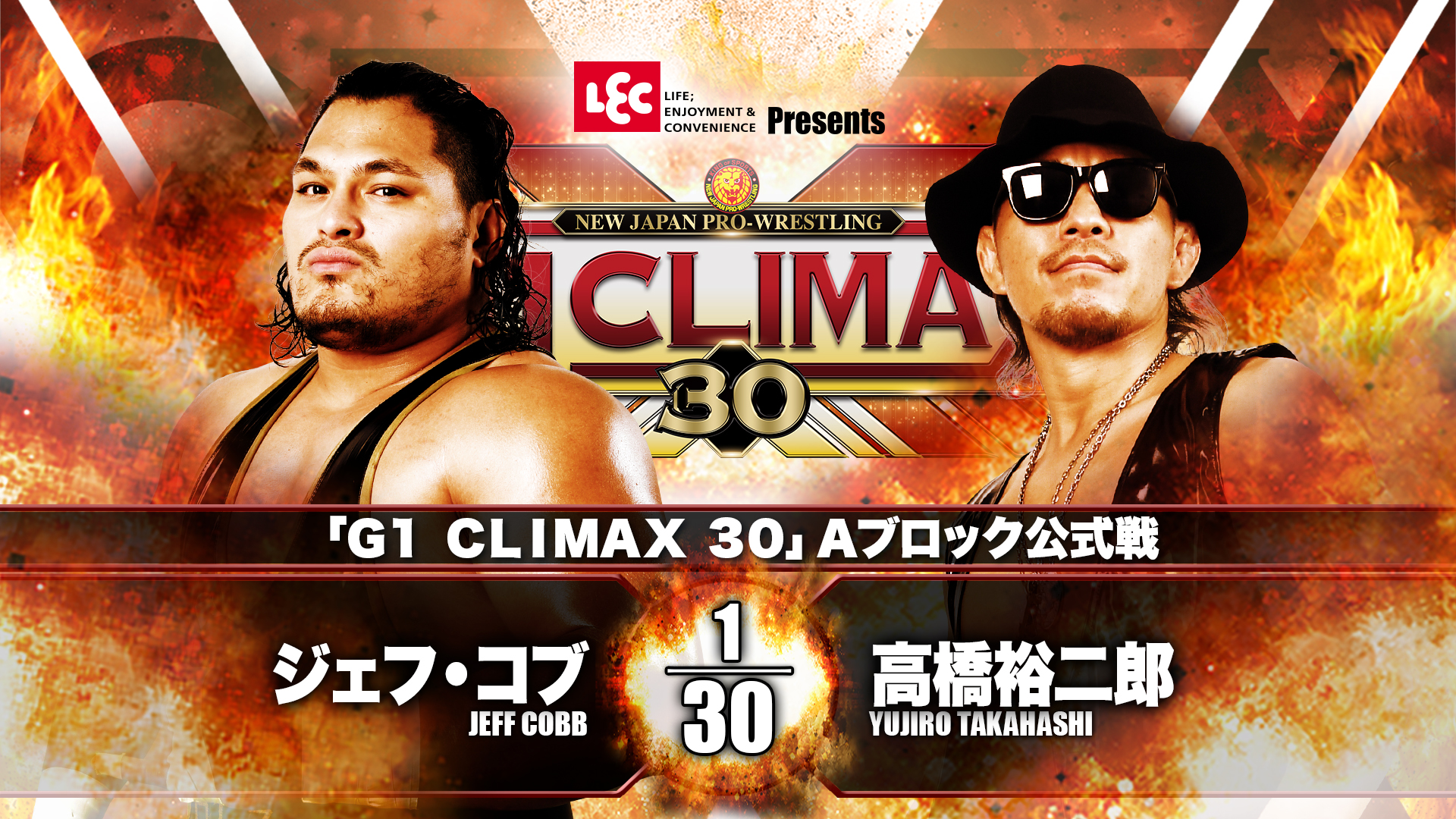 Even at 4-4, Jeff Cobb has had an impressive late campaign spurt that saw him defeat both Jay White and Will Ospreay, and now sees him in good stead to finish his campaign on a highly respectable ten points. In his path is Yujiro Takahashi, who seems to be inching closer and closer to his first two points on the board. Takahashi was impressive Tuesday in Hamamatsu against Kota Ibushi, but not good enough to score victory; can he get through his campaign with at least one win? 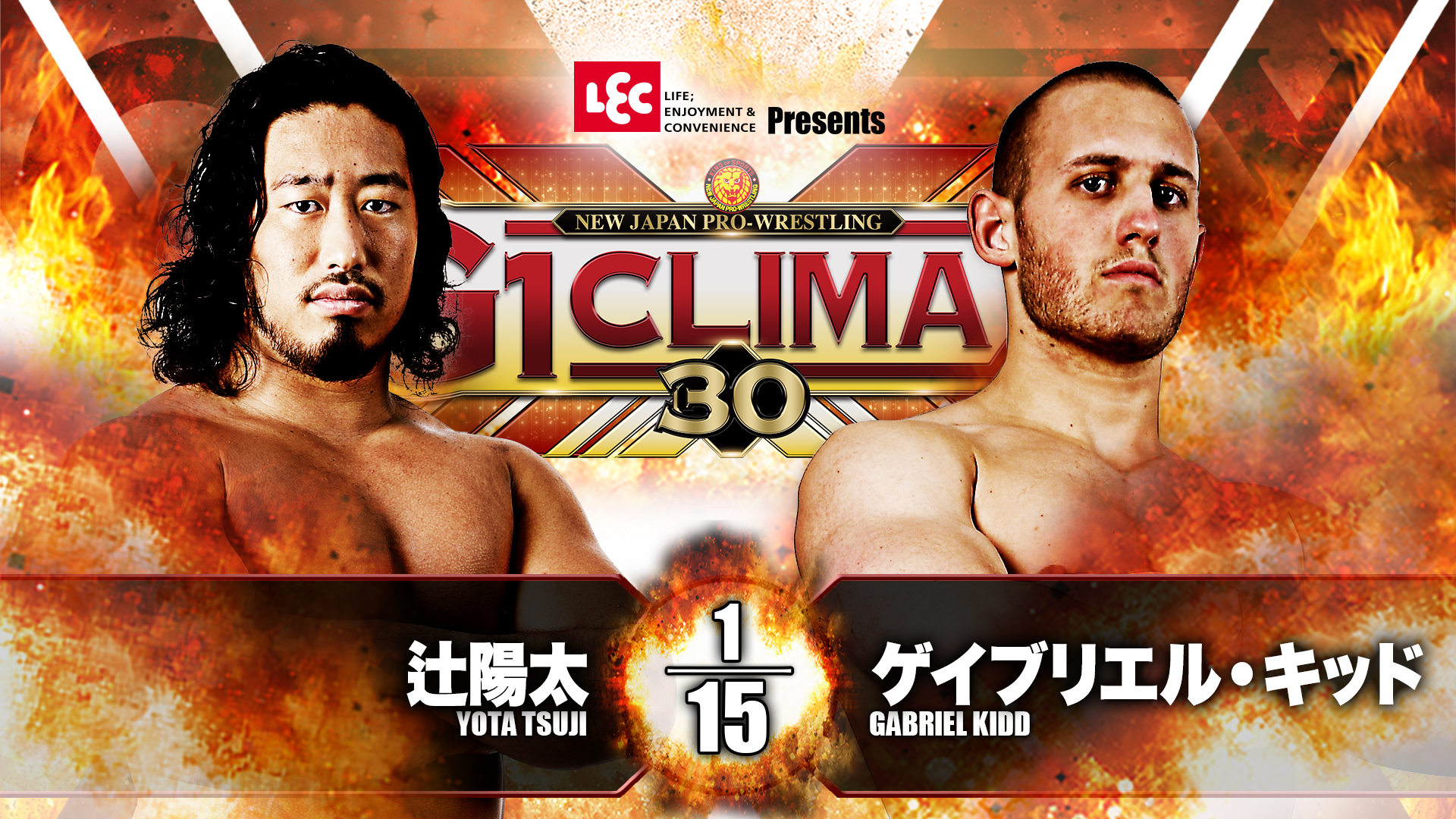 The night’s action will kick off with Gabriel Kidd facing Yota Tsuji as the unofficial Young Lion block of G1 competition nears its conclusion. Evenly matched all the way through the G1, Kidd, Tsuji and Yuya Uemura have been trading wins, losses and draws, but if one Young Lion can assert their superiority in Ryogoku, that may be all that matters. With back to back spots in Sumo Hall, could Kidd be that lion? Or will the pressure be too much to bear?