Best of the Super Hiromu: The Time Bomb Ticks On [1/2]

Hiromu Takahashi gives his thoughts on a packed winter schedule 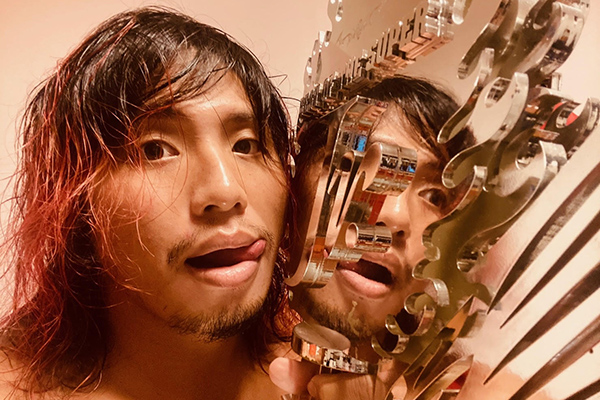 There were doubts that it could be done, but after an initial cancellation in May, Best of the Super Junior 27 will be taking place starting November 15. When BoSJ and World Tag League were announced during the G1 Climax event in Hiroshima, there was one person we knew we had to speak to…

I’ll be doing my thing, but I’d be lying if I said I didn’t have my eye on them 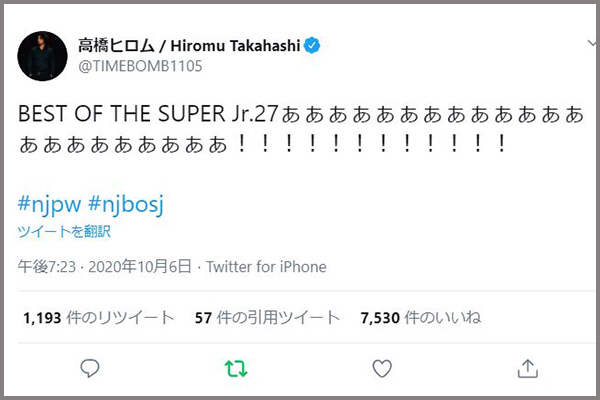 –So, Best of the Super Jr. 27 was announced on October 7, and you were quick to respond online.

Hiromu: Heheh. I was watching the show on NJPW World. The World Tag League announcement came first, which wasn’t so surprising, but then the big hit was BoSJ at the same time.

–You’ve been talking about Best of the Super Jr. since we returned in the summer; were you surprised to actually have it on the calendar this year?

Hiromu: I kept the faith! From the jump I’ve always been saying that it isn’t a cancellation, it’s a postponement. I think that BoSJ and G1 are two of the biggest strings to our bow, so I really didn’t believe that NJPW would throw one of them away.

–The fan reception was certainly very strong. But how did you react to the news that the two tours were going to take place simultaneously?

Hiromu: Hmmm. That is what it is, and I don’t think I have much to say about it. I’ll be doing my thing, but I’d be lying if I said I didn’t have my eye on them.

Hiromu: The important thing as far as I’m concerned is that we’re getting to hold the BoSJ. Like I said, I always kept the faith, but it was no certain thing, so I’m really happy it got announced.  Apart from that… well, I’m not really bothered. It could actually turn out pretty fun. I have no problem with people watching the two and comparing.

–There will likely be a bit of competition; the World Tag League members will certainly have their eyes on the juniors.

–You want BoSJ to win that competition obviously.

Hiromu: Of course. I don’t think that any of the juniors are completely oblivious of World Tag League. I think that competitive aspect will make things even better.

Usually BoSJ comes before the G1, but now it’s opposite. That might be an opportunity for us.. 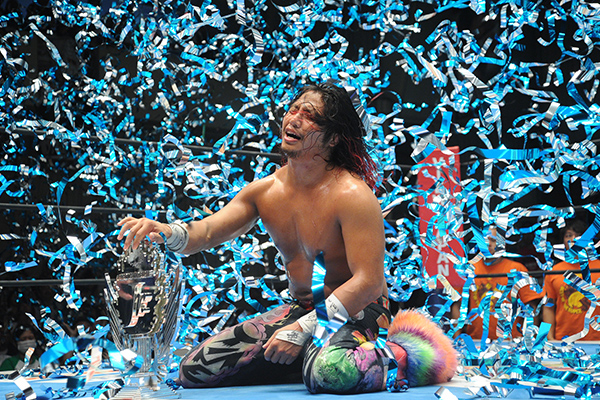 Hiromu: Another thing: is this the first year BoSJ has come after G1?

–It’s certainly the case that BoSJ usually comes in May/June before G1 in August.

Hiromu: It’s the other way around this year. I think that might actually be an opportunity for us. I don’t think any of the G1 guys went into that tournament thinking about the juniors, but I’ve been obsessed with the G1.

–You talked before about having G1 and BoSJ at the same time. Maybe that put the wheels in motion for this tour?

Hiromu: I don’t think the office is listening to me and what I want specifically, are they? But if I can fire things up a bit, so much the better. I’m never going to say that the junior heavyweights are beneath the heavyweights. But as long as we have two different weight classes, people are going to compare the two, and people should compare the two in my opinion.

–It’s only natural to make comparisons?

Hiromu: Right. So when it comes to the matches in BoSJ, I want us to blow everything that happened in the G1 out of the water, and have the fans think I was the best wrestler in the best tournament. And win the whole thing of course (laughs).

–A lot of fans will be agreeing with you.

Hiromu: And they’re welcome to join the ride if they do. But there are a lot of wrestlers who deserve support; I’m not here pleading for anyone to cheer for me. It’s just that we have this system where we are separated, and that makes me pretty competitive with all the other guys.

I prefer to explode out of the gates 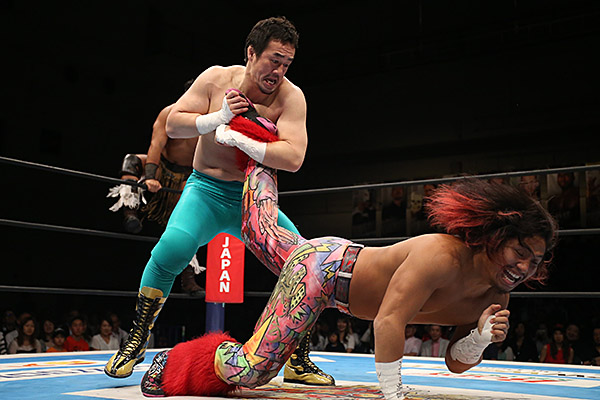 –Let’s talk a little bit about the schedule. Both World Tag League and BoSJ start on November 15 in Aichi, and then they both end on December 6 in Fukuoka, before both tournaments have their finals in the Nippon Budokan on December 11.

–Then the other 14 events will alternate between the two tournaments.

Hiromu: Normally we might have a situation where it’s three Korakuen cards in a row, and on the nights where it wasn’t my block, I’d be wrestling in tag matches on that card. Same as with the G1.

Hiromu: But with the schedule laid out the way it is, there’s presumably no tag matches, only tournament ones. To be honest, I prefer it that way. I think I’ll be able to focus better, and there’ll be a certain curiosity to each of the matches. I prefer to explode out of the gates anyway.

Hiromu: I think there are probably some people who reckon having those preview tags makes things more exciting, but in my mind, especially if it’s a fresh opponent I haven’t faced before, I prefer to just go straight at it. If it’s one of the foreign wrestlers coming into Japan for the first time, it’s a little scary, but it’s super exciting. That fear is a big part of what’s great in wrestling.

–And then there’ll be this big competition between the two tournaments. That’s often the case even between different G1 blocks ordinarily.

Hiromu: Yeah. When you’re in blocks, there’s definitely a sense of watching the opposite block and trying to outdo them. It’s all individual competition, but it’s almost as if you’re on a team. Mind you, I don’t know whether we’ll be in blocks after all or not with these tournaments…

It’s been an issue for juniors for years 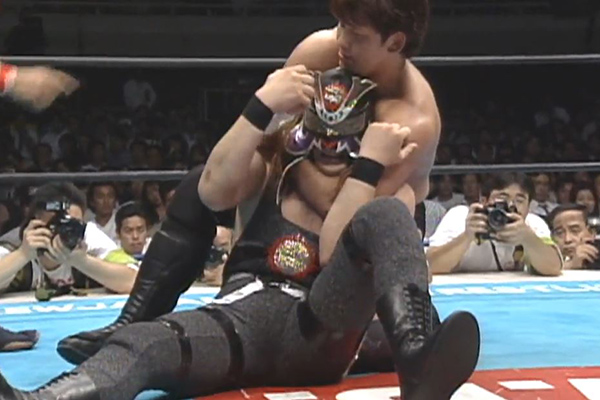 –What are your thoughts on the final taking place in the Nippon Budokan? 1997 and 1999 had the Best of the Super Junrio finals there, with Koji Kanemoto facing El Samurai in ’97 and Kendo Kashin in ’99.

–You’re right, it was third from the top, under the IWGP Heavyweight and Tag Team titles.

Hiromu: It was a big boom period, but I bet the juniors weren’t happy.

–You would assume they weren’t, being third from the top.

Hiromu: They’d be saying ‘the tour is called Best of the Super Juniors, but we aren’t the main event?’ And it happened quite a bit in the ’90s.

–You’re right. The second Best of the Super Junior final between Shinjiro Otani and Wild Pegasus was underneath two title matches as well.

Hiromu: So it isn’t a new thing, the juniors have faced this issue for years.

–You talked before about your opposition to BoSJ participants tagging with heavyweights higher up on the card than tournament matches.

–Then from 2018 every event on BoSJ cards had tournament matches in the main event.

Hiromu: Yeah. I wouldn’t say that’s because of something I said, but I’m glad I said it. I think from here on out I’ll say whatever comes to mind even if people get mad. It’s all for the benefit of the juniors. 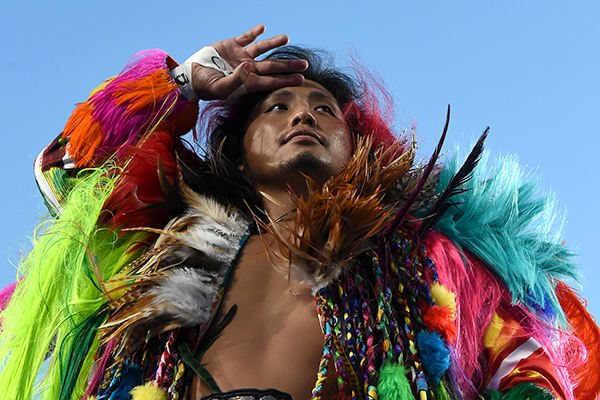 –Already a lot of fans are talking about who will main event on the final night in the Budokan.

Hiromu: I think that’s something the junior fans will have a lot of stake in.

–The junior fans in particular have a lot of pride in their fandom.

–And with the opener, and the last two nights all on combined cards, there are three times you’re sharing the spotlight.

Hiromu: Obviously the final is the most important of the three. That’s the battle to win. It’ll be tough, but I think when people watch both tournaments, the obvious conclusion will be that the juniors should main event.

–You usually have the winners of a tournament covered in confetti, a big showing, but now we have two finals…

Hiromu: It should be for the main event.

Hiromu: Well, you could do it for both, but I don’t think they will. It’d be a bit weird.

–There are a lot of moving parts to this, it’s an interesting situation.

Hiromu: I think the key will be in how they decide. Will they be looking at what matches will be on top and then deciding what will be a bigger draw? Or if both tournaments are a success, do they do a fan vote? Will it be a company thing or a fan thing?

–It’s not just the matches themselves that are exciting, but even the running order.

Hiromu: I mean they might just casually throw it out there in the end. Whatever happens, I’ll deal with the news as it comes, it’s not something to complain about.