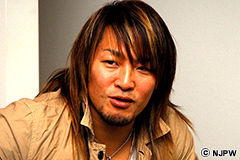 –So we teased this last time, but let’s go in depth about your March 28 2004 match with Kazunari Murakami.

–This was a steel cage held in an empty arena, then taped and shown to the audience in the building on the big screen. How was that experience.

Tanahashi: I think ‘hellish’ is an appropriate word? We did it in one of TV Asahi’s studios. Murakami was part of the Makai Club Stable, and the whole idea was that we would guarantee a result and a winner, and that’s why we did it in a cage, with a lock. But then Makai Club ran in anyway, so it kind of defeated that whole idea (laughs). I mean, it was a big experiment, but the fact we never did it again should be indication enough of how successful it was. 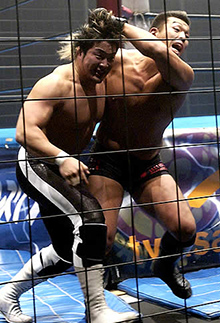 –‘Hellish’ is quite a strong term.

Tanahashi: Well, what I learned at the time was how important the crowd is to pro-wrestling.

–In the wake of the pandemic, NJPW have had no crowds and then the limited capacity we have today, but this was an empty arena setting by design.

Tanahashi: Whether they’re chanting or just clapping and stamping, the crowd create a rhythm, in pro-wrestling. Where and when you do different things as a wrestler, that’s dictated by the crowd for the most part.

Tanahashi: Take the people out, and it just becomes about hitting the other guy. That isn’t pro-wrestling to me. That one-ness with the crowd is what’s most enjoyable to me in this job.

–So the match wasn’t an enjoyable experience for you.

Tanahashi: I honestly felt really depressed after that match. I was asking myself ‘what did they just have me do?’ And then we did the match and I went over to Ryogoku while the rest of the show was still on. I didn’t want to be seen in front of the crowd, so I stayed in the back. I got some pretty important advice that night.

–And what was that?

Tanahashi: I was really downtrodden backstage and Tatsutoshi Goto came to me and asked what was up. When I told him, he said ‘you did everything you could, right? Be proud of that and move on!’ That helped me a lot.

–That there was nothing for you to be ashamed about.

Tanahashi: Right. Whatever the situation, however the match goes, if you give it your best then there’s nothing to be ashamed about. Thinking about what Goto said to me whenever I was disappointed in a match helped me pick myself up and go onto the next one. He helped me face criticism a lot better.

–Some good came from the night.

Tanahashi: It toughened me. That helped me not get broken down when I was booed so much later on. The match was a real disappointment, but it was an important experience. Not something I’d recommend everybody go through, but… (laughs)

Tanahashi: I remember him being insanely good looking. He could fly for a big guy too. He was good enough to be in WWE.

–He was a good wrestler, but was representing K-1 on this card for some reason…

Tanahashi: Right! I think he had designs on MMA but ended up staying with wrestling. I don’t remember much of that match, but I do remember the press conference…

Tanahashi: I remember we stood opposite for the old fight pose photo for the cameras and he gave me this sly little wink. I thought that was cool as hell! I didn’t know this guy but he had me pretty nervous all of a sudden. He had real confidence.

Tanahashi: He certainly had that US wrestler aura to him. It’s tough, facing a guy with that much sex appeal. He had the mental edge for that match (laughs).

–What did you think of the matches you were in at that phase of your career?

Tanahashi: I was graduating from that young guy spot, but I could feel that the company was losing its direction. There was the whole K1 thing, I faced TOA for the U-30 title as well. I really think the MMA stuff and K-1 had no place and shouldn’t have been mixed in with what we were doing. Just because they’re both combat, they’re both in a ring, doesn’t make them the same thing. It’s like saying teen pop and heavy metal are the same because there’s singing.