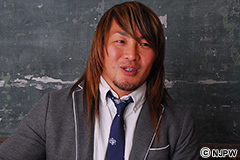 –It was around the middle of 2004 that people started talking about you, Shinsuke Nakamura and Katsuyori Shibata as the ‘New Three Musketeers of the Fighting Spirit’, putting you three in the same breath as Keiji Muto, Masahiro Chono and Shinya Hashimoto. All this time removed, how did you feel about that label?

Tanahashi: Well, Shibata and Nakamura had the same thinking. Don’t lump us together, kinda thing. I get that, but I didn’t think there as much to be gained from us all having the same approach. So I thought about my position a little, and went into it with more positivity.

–You read the room somewhat?

Tanahashi: Yeah, I guess. I mean, here’s the thing. If we had the company lay out a role and put us in there, and then the three of us shrugged and went into it reluctantly ‘OK, let’s give it a shot’, then would it really get over? If the people involved aren’t dedicated to the direction, you can’t expect the fans to be.

–So you were taking the fans’ perspective into account.

Tanahashi: Well, I had to take into account Nakamura and Shibata into account and how strong willed they were, as well as the position I was in and try and live up to the expectations the company and the fans had as best I could.

–You were the real model professional.

Tanahashi: I AM the real model professional! I’m the only true pro left in the business, brother (laughs).

Tanahashi: But y’know, in the end ‘the new XX’ is usually a kiss of death. It’s very hard to make that kind of thing work. I was definitely very aware of that as well.

–It’s always hard to live up to the original.

Tanahashi: Yeah. And come to think of it, when you talk about Fighting Spirit- Tokon- there was the Tokon Trio as well.

–Ah, you’re right! Before he turned heel and became Takashi, it was Takayuki Iizuka, Akira Nogami and El Samurai. And as long as we’re talking about Three Musketeers, Yuji Nagata, Manabu Nakanishi and Tokimitsu Ishizawa (later Kendo Kashin) were known as the ‘Three Musketeers of Amateur Wrestling’

Tanahashi: Ah, yeah (laughs). It’s not easy to live up to that legacy. You can’t just slap the name on there and expect it to do well.

–Shinsuke had said that the Three Musketeers concept sent him crashing back to Earth after his experience with the IWGP title, but you were more considered about it?

Tanahashi: Yeah, I’d say so. I think from the outset I had what the company wanted in mind. Whatever my own thoughts might be, go out there and produce to the absolute best level I can. I guess I’m a pretty easy guy to work with (laughs).

–The model pro again (laughs). In the 2004 G1, you were very vocal about calling yourself the favourite to win.

Tanahashi: I went that far, did I? (laughs) But yeah, I guess after that first IWGP challenge, I was getting more confident.

–You had a very impressive 6-1 record in the league. Wins over Osamu Nishimura, Koji Kanemoto, Manabu Nakanishi, Shinya (now Togi) Makabe, and Yoshihiro Takayama. Your only loss was against Hiroyoshi Tenzan, and you beat Genichiro Tenryu in the semi finals.

Tanahashi: Another roll up win (laughs). But I lost the final to Tenzan. 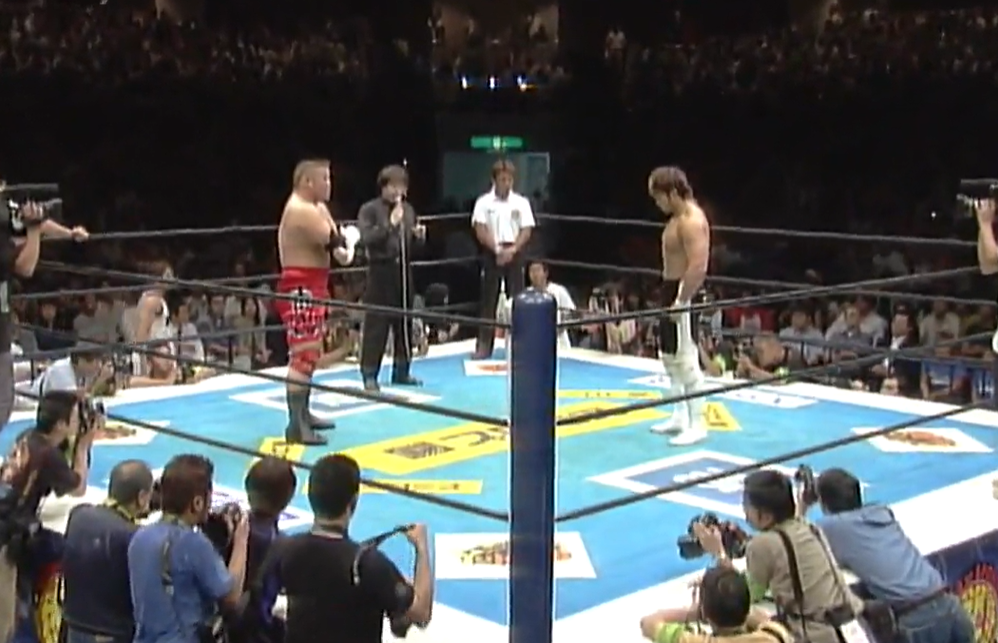 –You’re right. Tenzan went through Shibata, Nakamura and then you, so he beat all three of the new musketeers.

Tanahashi: I remember that match with Tenzan really well. I didn’t have quite the complete sense of my own style I got later, but I was able to bring all I had to the table in that match.

–You lost, but you were happy with the match.

Tanahashi: Yeah. I think that theme of Tenzan going through each of me, Shibata and Nakamura, with me as that last boss, it was easy for the fans to get behind. We were both heavyweights of course, there wasn’t an underdog role per se, but Tenzan drew the fans’ empathy. I was kind of the de facto heel.

–Tenzan was really at his peak of his career here, and he became the second person to ever win the G1 back to back. Your thoughts on him?

Tanahashi: Oh man, he was tough. I would kind of give my own digs at Tenzan over the years, I’ve said ‘well, he’s a tough guy in the summer’ (laughs). But the truth is, I think he’s the best wrestler to come out of the Third Generation.

–That says a lot.

Tanahashi: Key for Tenzan is that fear factor he brought. He can get mad very easily, and when he does, watch out. That ‘raging bull’ within him, nicknames come for a reason. He would really be out of control, so much power, and a really muscular upper body, especially back then. His matches were all about managing that switch within him, controlling that anger.

In the end, I didn’t win the G1, but it was definitely something to be proud of, making the finals for the first time.