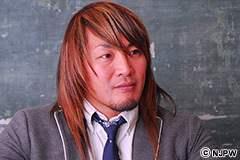 –We talked last time about being labelled the New Three Musketeers, but in actuality you only teamed as a trio once, on October 1 2004 in Korakuen.

Tanahashi: I remember! There was this distance between us, for sure. I don’t think we gelled together as a team at all.

–Well, Shibata tagging in with slaps will do that (laughs).

Tanahashi: We were both young, both looking to assert ourselves. But just the image of the three of us lined up was a hell of a thing, I think. Wrestling is all about those moments in time, and that’s something that probably still stays with the people that were there. The three of us, all in our 20s, all cut like we were.

–Did you get along away from the ring at the time?

Tanahashi: We weren’t close, but we were cordial, I think. But yeah, there was definitely a distance between us in the ring.

–That’s different to the original. Muto, Chono and Hashimoto got along quite well.

Tanahashi: I think we had a more complicated relationship with one another. Like Shibata was one year my senior when it came to his career, but Nakamura was newer than the two of us. Those two are the same age, but I’m three years older. Shibata and Nakamura were very conscious of one another and it showed in that six man; it was really those two dictating the pace of the match.

–What was your take on their relationship?

Tanahashi: I kind of felt like it was the old Lone Wolves days, I was Hiro Saito trying to butt in.

Tanahashi: They were these two grinding gears, and I had to be the oil for them. That’s really the main role of a wrestler; to make sure a match flows properly for the people.

–Shibata had a bit of a wild man image at the time. What was your opinion of him in the ring?

Tanahashi: He wore his heart on his sleeve. He had a lot of ups and downs emotionally and you could see that very clearly in the ring. He was more delicate than you might think.

–You went on to take very different paths in the 16 years since.

Tanahashi: That’s the truth! It’s interesting though, after he came back, there was still this distance between Shibata and Nakamura. Like Shinsuke didn’t want to acknowledge him, almost. I addressed that elephant in the room as quick as I could.

–And that had a special significance to both of you.

Tanahashi: Well, I wanted to see where both of us stood. The Ace is a caring guy.

–I remember after that six man tag you had a very Ace like proclamation. You said that you would ‘right the ship that is NJPW’.

Tanahashi: Words above my station, I guess. I think that I felt that needed to be said speaks to how things were really messed up at the time, but what I said still didn’t hold much sway with the fans back then; it took a bit more time.

–Just over a week after that match, in Ryogoku, you teamed with Shinsuke Nakamura against Keiji Muto and Osamu Nishimura. It was a match you asked for; your first time opposite your master.

Tanahashi: That was a big one, yeah.

–A lot of wrestlers have said they found it tough to face Muto; how did you feel the match went?

Tanahashi: The thing is that win lose or draw, the entire flow of a Muto match is around Muto. He really outshines whatever opponent is opposite him, to the point that you don’t remember the guy he faces, you only remember Muto. When I wrestle I try to get the other guy to shine as much as possible, but that isn’t in Muto’s gameplan.

–He’s always been resolute in that sense.

Tanahashi: Well, the thing is, he was still one of, if not the biggest star around at the time, and I still wasn’t at that level. So it was a case of me feeling that I’d finally gotten this far, and I was finally able to face the guy I worked as an attendant for.

–The big surprise that night was the return of Riki Choshu, after he left NJPW in May of 2002. Did you or the other wrestlers know about that beforehand?

Tanahashi: I had no idea. He certainly put himself right at the front and center…

–Let’s talk more about that next time!