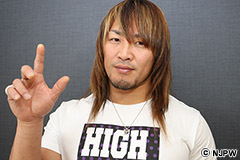 –So last time we talked about your October 2004 match in Osaka Dome, teaming with Hiroyoshi Tenzan against Naoya Ogawa and Toshiaki Kawada. Both Kawada and Ogawa at the time were part of the HUSTLE organization; the group had a lot of hype and mainstream attention around it. What were your thoughts on the promotion?

Tanahashi: I really didn’t have any connection to it whatsoever. If you had to push me, I wasn’t a fan.

–They were very focused on the entertainment side of things, and a lot of their attention was to do with having comedians and celebrities in the ring. That doesn’t seem to be your thing.

Tanahashi: And maybe it’s just me being old fashioned. But I believe we as wrestlers worked and worked and went through hell to be able to get in that ring. So I tend to watch while asking myself ‘do they really have any love for this?’. It seemed to me they didn’t, that it was just poking fun at the whole thing.

–You had some very salty comments at the Osaka Dome show, not only toward HUSTLE but K-1 Dynamite! as well. Their New Year’s Eve event was set for Osaka Dome, and Antonio Inoki welcomed Bobby Ologun and Yoshihiro Akiyama to the ring that night. You said ‘all we’re being used for is to plug Dynamite and HUSTLE’

Tanahashi: I think what really got to me was that it was Inoki doing it. He became a legend because of professional wrestling, and to be out there shilling something else was really unforgivable.

–Inoki would likely say the opposite, that he was using the attention to draw in a new audience and make things more interesting.

Tanahashi: Really? C’mon, Inoki didn’t have a single good thing to say about NJPW in the press at that point in time. And when someone with that much say talks the way he does, well the fans take him on his word.

–He was quoted saying ‘NJPW is rotten’, and he owned the company!

Tanahashi: Can you imagine restaurant owners with a megaphone yelling ‘our food tastes like shit?’

–You were originally scheduled to wrestle Shinsuke Nakamura in the main event that night. After his match, Inoki punched Nakamura as apparent punishment, while opponent Kendo Kashin remarked that ‘everyone in the ring and in the back has lost their motivation’.

Tanahashi: I don’t think he was wrong… with one exception (laughs).

–Of course! You were actually in demand from a number of promotions at this point. Was there not an offer from HUSTLE on the table?

Tanahashi: There was, actually. 2005, I think? It would have been when (comedian/wrestler) HG was there. I knew someone who left NJPW to go there and they reached out.

–You and HG were connected from your university days. Presumably it would have been for a program with him?

Tanahashi: Well, the talks never got that far, but it was a big offer. Three years at [redacted] per year, which was huge at the time.

–That’s… a lot of money. You didn’t think about it?

Tanahashi: Not at all! To me, more than money it’s about whether something’s worth doing, whether it’s fulfilling or not.

–What did your family say?

Tanahashi: I…didn’t tell them (laughs). If I did they’d have told me to go (laughs).

–Your wife would have intervened (laughs).

Tanahashi: I can say this now, but all this talk was coming right as my contract was coming due with NJPW. (Current Chairman Naoki) Sugabayashi was handling my contract. I went into the office to re-up, and I had shoot forgotten to bring my personal seal with me to seal the contract with. So I said ‘I’ll stamp it next time I’m here’. Sugabayashi immediately said he’d take a taxi to my house so I could stamp the contract there.

Tanahashi: I said I was going to stay! But for him to do that, and this was before I became champion, that really was a classy thing to do. it really showed me that I was important to him and the company.

–HUSTLE would go out of business not long after all this. Did you get the sense that it wasn’t to be long term?

Tanahashi: No, I didn’t give that much thought. You want to really know why I stayed?

Tanahashi: Because I love NJPW. Love trumps money; that was always a theme for me.