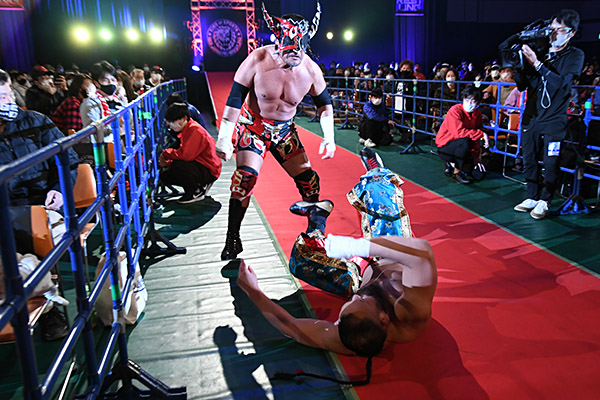 A pair of highly anticipated and extremely heated singles matches in Nagoya saw Will Ospreay and Hiroyoshi Tenzan United Empire stamp their authority on NJPW’s legends Hiroyoshi Tenzan and Satoshi Kojima and raise questions about what the future holds for all four men.

First, Hiroyoshi Tenzan took on Great-O-Khan in a match where the loser would have to retire the use of the Mongolian Chop. Tenzan charged at O-Khan during his entrance, and the two brawled outside the ring before the referee could ring the opening bell. Bell rung, Tenzan used his Mongolian Chops to work over O-Khan before his younger opponent responded in kind. Slowing the pace, O-Khan disrespected Tenzan as he sat over the veteran in the corner, but Tenzan was able to regain control on the floor, and land Calf Branding into the ring. 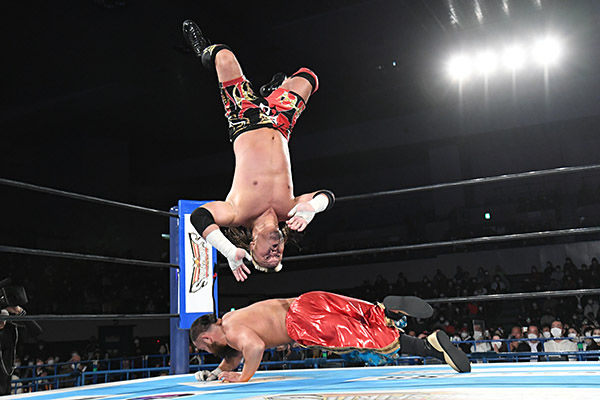 Tenzan landed a suplex and looked for the TTD, but O-Khan countered to a face buster, and the two engaged in a Mongolian Chop exchange center ring. The former IWGP Heavyweight Champion planted O-Khan, and followed up with the Anaconda Vise, and an Anaconda Buster, getting two as O-Khan barely kicked out at the ten minute mark.

Tenzan tried to finish off O-Khan with a Moonsault, but found nothing but empty canvas. Still Tenzan refused to be conquered by O-Khan, landing a headbutt before the TTD was countered again by O-Khan. Tenzan was on the receiving end of  another four Mongolian Chops, and the TTD; Tenzan fired up and kicked out, but an Eliminator followed to grant the United Empire the victory. 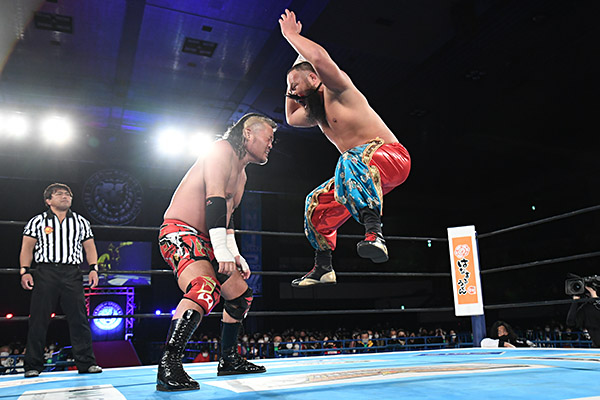 After intermission, it was Will Ospreay taking on Satoshi Kojima in no DQ action; Ospreay setting the tone right from his entrance, heavily armed as he headed to the ring to await Kojima. In a hot start, Ospreay took Kojima quickly to the floor, but found a powerbomb attempt onto a trashcan counrtered with a back body drop as Kojima took control. Moments later though, it was overambition on Kojima’s part that saw the seesaw swing in Ospreay’s favour, a plancha hitting the floor and a ladder ringing off Kojima’s face. 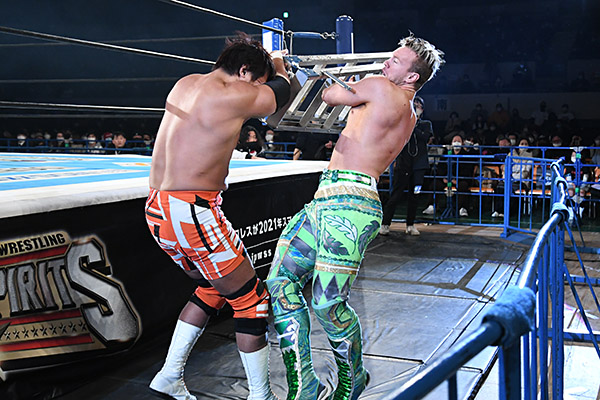 Ospreay had full control of the veteran as the match passed five minutes, sending him into an exposed turnbuckle, and then landing a backbreaker before introducing steel chairs into the ring. A hip toss sent Ospreay into the chair however, and machinegun chops followed before the signature elbow off the top, this time assisted with the chair. The move hurt its user just as much as it did Ospreay however, and the Briton landed a handspring to Kojima before setting up a table on the floor. 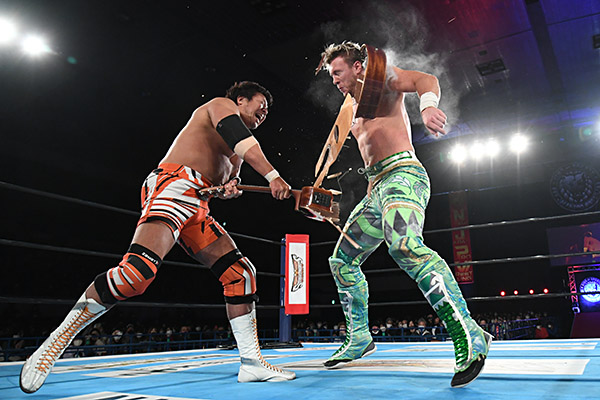 Looking to soften Kojima up in the most violent of forms at the ten minute mark, Ospreay brought a guitar to the ring and tried to level his opponent, only to meet a counter from Kojima and the guitar exploded over his head. Refusing to go for a cover, Kojima brought another table into the ring, and landed a KojiCutter, but a lariat counter saw Ospreay powerbomb his opponent through the wood. 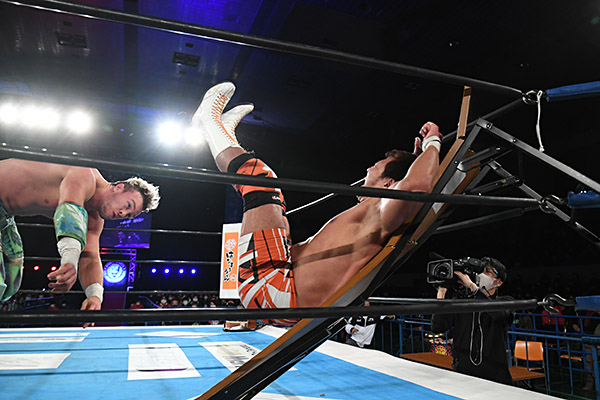 Still Kojima refused to stay down, kicking out of a follow up OsCutter and prompting Ospreay to bring a stack of chairs into the ring. Ospreay set up the chairs near the corner and looked to dive onto Kojima, only to find himself knocked off the top and through the ladder that was bridging the apron and guardrail.

Insisting on defeating Ospreay clean, Kojima would not accept the countout win, instead bringing his opponent inside for a brainbuster onto the steel chairs for two. Ospreay desperately tried to escape a lariat, instead eating one to the back of the head when Ospreay went for the OsCutter once more. With a surge of adrenaline, Ospreay blocked another lariat with a steel chair assisted elbow, before Hidden Blade and the Stormbreaker got a narrow win for the United Empire. 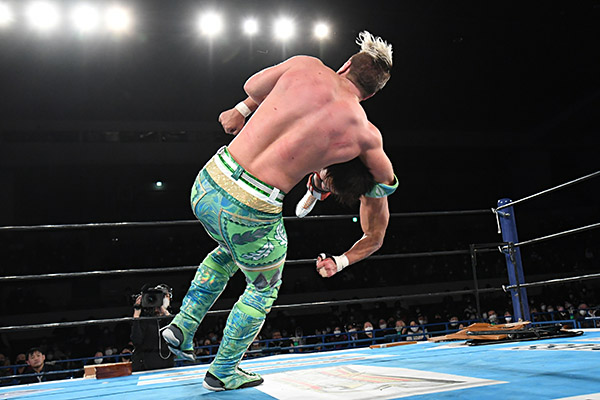