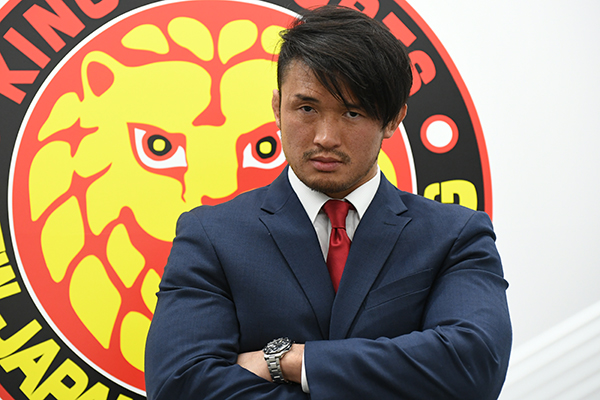 One of the major shifts in NJPW to come out of the global COVID pandemic has been in the inauguration and progress of NJPW STRONG. The weekly NJPW World broadcast has seen new wrestlers come to the fore, many of them honed in the LA Dojo, under the watchful eye of Katsuyori Shibata; whether that eye is watching from behind the curtain, or in the commentary studio. We caught up with Shibata to talk about his newest recruits and more besides.

You keep it simple, keep the moves limited, and get used to showing fire 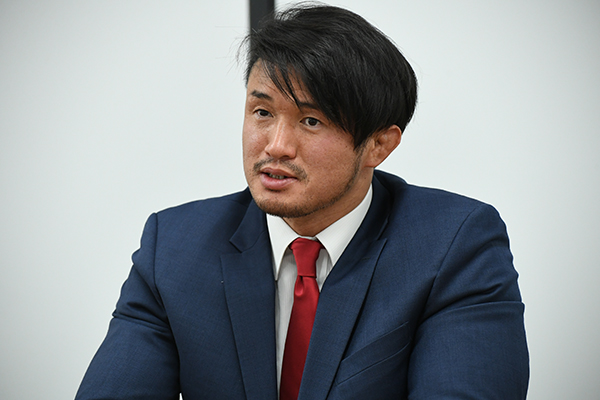 –So, a belated Happy New Year to you. How did you spend the holidays?

Shibata: Happy New Year! My holidays were all work! Helping with the training, either in Japan or LA.

–I know you watch video from the LA Dojo to assess the training there from Japan.

Shibata: Yeah, I was doing that when I couldn’t get into America. Then when STRONG started, and I was calling those matches in Japan, I was able to see that they’ve been able to put what I’ve taught them into practice. That put my mind at ease a bit.

–Kevin Knight came into the Dojo, and started at Super J-Cup 2020. What do you think of how he’s fared so far?

Shibata: He’s like a human spring. That’s a good thing. He calls himself Jet, and that’s the name he used when he applied to try out…

–He used his ring name from day one?

Shibata: It’s getting a bit ahead of yourself to use a ring name before you debut (laughs). But, even though he didn’t have much experience coming in, he’s very athletic and has an incredible dropkick.

–You were in Japan for most of the time leading up to his debut. How did you help him get ready?

Shibata: Well I kept up with how he was doing on video all the time, but I left a lot of it to Alex (Coughlin). I trusted him to pass that LA Dojo theory that I’d taught him, onto Kevin.

–The Shibata-ism is strong in Coughlin.

Shibata: I think Alex has probably done more teaching this last year than I have (laughs). But obviously it’s not always perfect and that’s where I come in to do the fine tuning.

–How does it feel to have another Shibata-ist debutant?

Shibata: It feels great, for sure.

–His dropkicks are certainly amazing.

Shibata: Ahh, when he kicked Connors on the top rope! His instincts were on the money, to know what to do in what situation. At this point it’s all about keeping it simple, don’t overstretch. Few moves, done well and get used to showing that fire and get that across. Technique and moves, that can come later.

I’ll give you a start, but then it’s up to you. 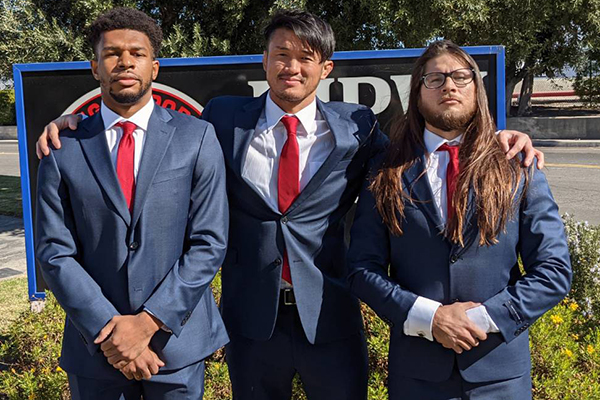 –So Kevin got a passing grade in his debut.

Shibata: Well, I’m not here giving percentage points. I wouldn’t say it was a perfect effort, but I think it was pretty good for his first time in. But then, I didn’t praise him after the match or anything.

–What did you say to him?

Shibata: Ahh, you know, ‘more of this here’, ‘keep up that nervous energy all the way through the match’ that kind of thing. It’s all about looking at the issues that come up from each match, working on them in the next one, and steadily building up that experience.

–So what’s the next step for Kevin, as far as you’re concerned?

Shibata: It’s not so much wanting him to do this or that as it is wanting him to really train properly, get a good solid foundation and then to be able to see things through that lens as you grow. I don’t want to have a bunch of Katsuyori Shibata clones. You just put your own original spuin to what you’ve been taught. Like Clark (Connors), he’s only ever done stuff that I’ve taught him, those fundamentals. But for example, we’ve done rope work drills where you run at a diagonal and change directions, and he’s taken that and thought to add that pounce to his matches.

Shibata: You take on these lessons, put them to use in your own way, grow bit by bit. The most important thing is to be able to think for yourself. It’s important to know what you yourself would do in each situation. Only you know what you want to do and who you want to be. It’s not about copying, it’s about me giving you a base and then you taking it from there. I’ll take these guys’ questions and we might use those questions as a jumping off point to work on some things, but there are questions in this business that don’t have a right answer; it’s stuff you figure out your own answer through, even if the lessons can be pretty painful in your matches. You can’t really copy what I did, and if you did, you wouldn’t be better at being me than I was. You have to be the best you that you can.

–Once the basics are taught, it’s trial by fire.

Shibata: Yeah, you get out there, you face a guy who wrestles in a different way, and that gives you something more to think about. Obviously that preparation is important, but after that, win lose or draw, you get to the back and think about whether you put in your best effort, what you need to work on. Guaranteed not one match is ever going to go exactly the way you picture it in your head beforehand.

You can’t fault his heart. That’s what I love about DKC. 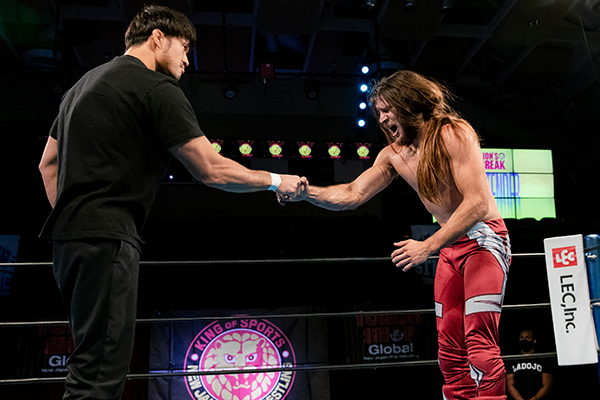 –January 9 on STRONG, The DKC appealed to you directly to join the LA Dojo, and you greeted him with ‘come with me!’

Shibata: I was happy to hear that from him, that he really truly wanted to be a part of the LA Dojo. Somebody puts themselves out there like that, I thought I had to respond.

–What’s your take on DKC?

Shibata: He’s a smart kid. And he puts in a ton of effort. His work ethic is incredible. He knows he isn’t the biggest guy, and he’s working on that. He eats every three hours, like clockwork. It’s incredible. Drinks raw egg whites, the works.

Shibata: I heard that he was doing that and thought the boys were BSing me. Then I saw his drink shaker with egg whites in there. I asked him ‘you really going to drink that?’ ‘Yessir!’ and he gulps it down (laughs).

–What do you like about him in the ring?

Shibata: He has a ton of heart. That spirit he shows, I love that about him. If it wasn’t for that, he wouldn’t get far with his size, but I think he can find something to tap into without being a huge guy. Super competitive, too. That spirit has really helped him training; he keeps up with everything on the menu and he never complains. He’s been great.

–He’s been willing to ditch his long tights to go with the traditional black trunks.

Shibata: Absolutely. He was prepared to do that. He hasn’t shaved his head though…

–Ah, yes, he still has that trademark long hair.

Shibata: Well, to be honest that’s something I thought about when I started training guys, whether to do the head shave or not. I didn’t want posers preening about the place, but I didn’t want to steal their individuality either. In the end it’s a cultural thing.  I did ask all the boys direct if they’d be willing to do it.

Shibata: They all said ‘of course’, and I told them ‘you don’t have to get a full shave, just get it cut short’ and sent them to the barber’s. They all came back looking like Karl (laughs).

–So it’s more about seeing whether they want it bad enough to be willing to make the sacrifice than anything else.

Shibata: Yeah. With Jet and DKC, I think we were past that, so I told DKC he didn’t need to cut his hair.

–It’ll be interesting to see how they both progress.

Shibata: For sure. With DKC, he isn’t exactly a Young Lion. He’s had experience, so for him to be willing to start again is impressive in itself. We’re really building an impressive group of people over there. And I’ve been able to work pretty closely with Gabe since I spent most of last year in Japan as well.

Shibata: I definitely spent more time training with him than with the boys in LA. That was a good thing for him, I think, especially as he was wrestling all those matches as well. He’s really come a long way.

Heart is absolutely the most important thing 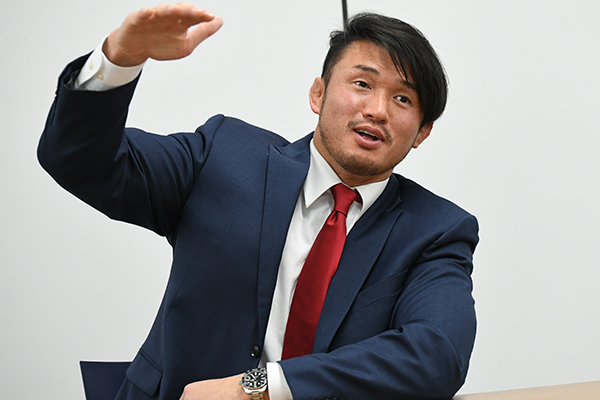 –All the LA Dojo guys are growing in interesting directions.

Shibata: It’s like I said before, I make the trunk of that tree; it’s up to them to make the branches and the leaves. And how Gabe will do things is different to Alex, or Narita, or Karl. That’s exciting.

–You seem happy with how they’re doing.

Shibata: They’re in the same soil, they’re getting the same water, the same sunlight. But they’re different seeds, and they’re growing into different trees. That’s what’s great about these guys. And in three years, the Dojo’s had Karl, Clark, Alex, Gabe, Narita and now DKC and Jet. That’s a hell of a team of seven to have as your base.

Shibata: And it isn’t about growing and bringing people in for the sake of it. This absolutely isn’t for everyone, and that filtering out process is strict. It’s a high barrier to entry. A lot of people have dropped out along the way; the one thing to remember is that heart is absolurtely the most important thing.