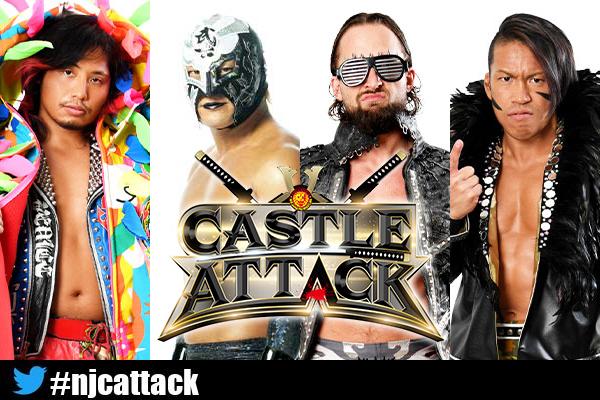 Watch Road to Castle Attack LIVE and in English on demand on NJPW World!

The last event on the intense Road to Castle Attack will end where it starts in Korakuen Hall. Atop a card full of previews of the action we’ll see in Osaka Jo Hall on February 27 and 28 will be a championship match that sees the IWGP Junior Heavyweight Tag Team titles on the line.

During the Road to The New Beginning in Ota on January 23, El Phantasmo and Taiji Ishimori captured the tag titles from Yoshinobu Kanemaru and El Desperado. In an out of control out that ripped out every single page in the rule book, multiple downed referees and all around carnage came to an end when El Phantasmo struck Sudden Death for he and Ishimori to lift the titles for the second time.

Sudden Death has been the subject of controversy for months now, as those hit by the move have insisted that there is foul play afoot in the shoes of Phantasmo. ELP has protested his innocence, but fair or foul, the move is undeniably effective. It’s also a move that Phantasmo hopes to use to score his first singles championship in NJPW, but there is one condition on his challenge to Hiromu Takahashi on February 28.

When Phantasmo hit the ring to challenge Hiromu Takahashi in Nagoya this past Wednesday, the IWGP Junior Heavyweight Champion eagerly accepted, but he insisted that ELP put something on the line first. Stating that he could not simply give a title shot to a man he’d already beaten on January 4 at Wrestle Kingdom 15, Hiromu promised to face Phantasmo if the tag titles were put up for grabs first.