The Castle Attack tour will culminate with a huge second night in Osaka Jo Hall on February 28. The IWGP Tag Team, Junior Heavyweight and Intercontinental titles will be decided, as well as a huge NEVER Openweight Championship bout all on a loaded night of action! 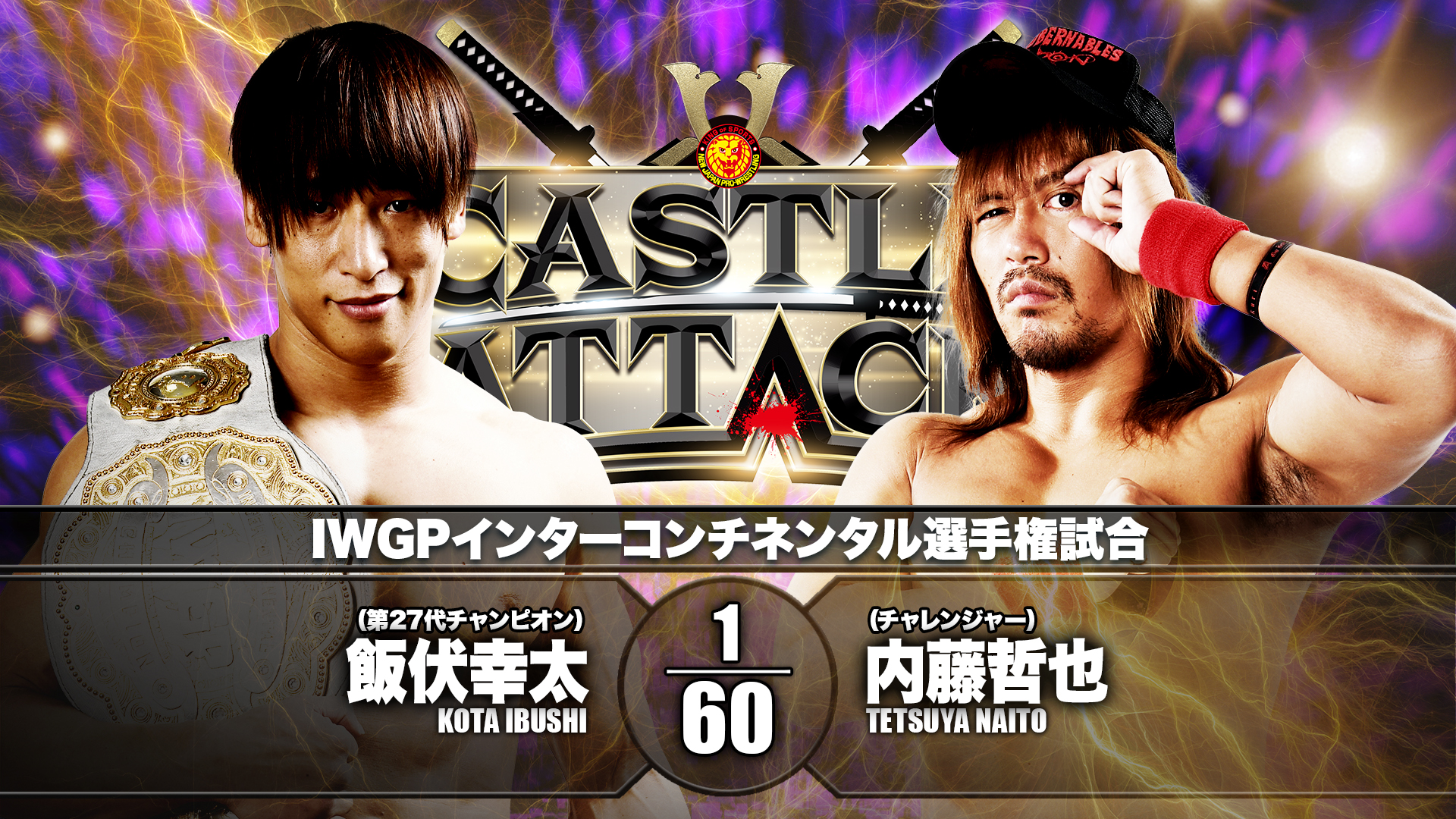 Headlining on the second night of Castle Attack in Osaka Jo Hall will be Tetsuya Naito challenging IWGP Intercontinental Champion Kota Ibushi in what will be the first time the championship is defended individually since January 4 2020.

That night in the Tokyo Dome, it was Naito claiming the championship from Jay White, starting what would be his fifth reign with the white and gold belt that has defined this phase of his career. Since heading up Los Ingobernables De Japon, Naito has had a love, hate relationship with the Intercontinental Championship, a belt he initially claimed had no reason to exist, and which he repeatedly denigrated and even smashed to pieces on occasion. Yet when the opportunity arose for Naito to become the first ever double IWGP Champion, its importance as a crucial part of Naito’s career legacy became clear.

Naito did indeed become the first ever double IWGP Champion, and pledged to be the last as well. Naito’s plan was to defend both titles individually in every small town across Japan. Yet when KENTA attacked Naito after his triumphant crowning moment, things changed. After one double title defence, the pandemic struck, and on NJPW’s return, Naito found himself struggling to fight for and keep both titles against EVIL.

Meanwhile Kota Ibushi had begun his own journey to make history and ‘become God’. When Ibushi won G1 Climax 30, Naito woudl grant him a double title opportunity on January 4 even after Ibushi was relieved of his right to challenge. Legacy had become everything to Naito who wanted to defend his double titles in successive nights, but it wasn’t to be. Ibushi won double gold on January 4, retained on January 5, and then revealed his vision as champion: to unify the title belts.

Unifying the championship legacies of ‘Shinsuke Nakamura’s Intercontinental Championship and Shinya Hashimoto’s Heavyweight Championship’ is, to Ibushi the best way to create an even greater legacy, and an era that he himself will define. Yet to Naito this is unacceptable. El Ingobernable now seeks to define the title that has defined him. The question is whether March 1 will see us waking up to the words ‘and new’, or ‘and last’? 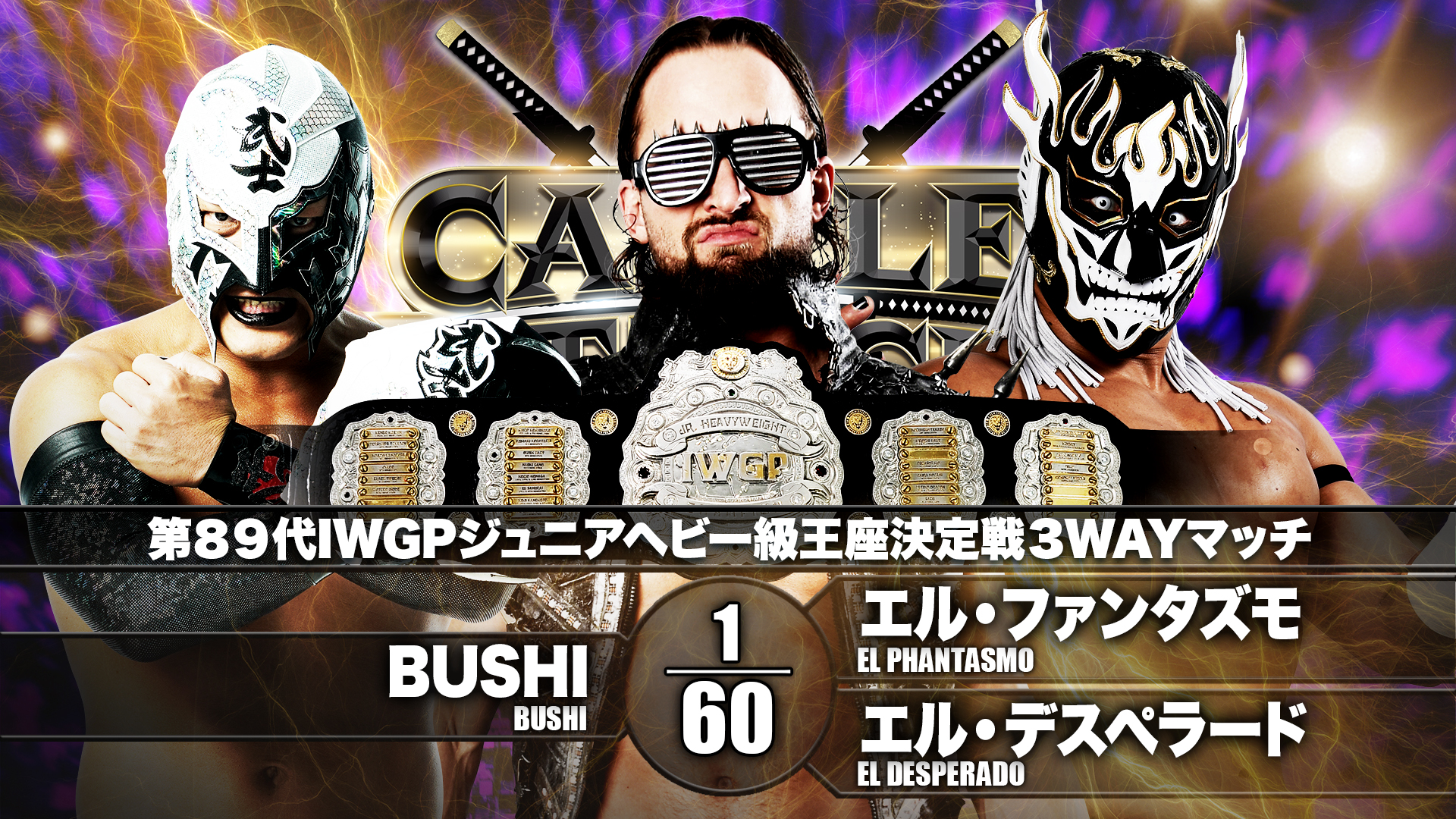 The semi main event in Osaka Jo Hall will see Hiromu Takahashi defend his IWGP Junior Heavyweight Championship against El Phantasmo. This is a rematch from January 4, and the opening bout of Wrestle Kingdom 15; then it was Hiromu as Best of the Super Jr. winner looking to face the winner of Super J-Cup 2020 in a bout to determine who would face then champion Taiji Ishimori the next night.

Hiromu emerged victorious in both contests, shouting out in victory on January 5 that the near future will see an IWGP Junior heavyweight Championship match in the main event at the Tokyo Dome. Phantasmo is a major obstacle to Hiromu getting that spot.

Hiromu vs ELP at the Tokyo Dome saw Takahashi grab the win, indeed, but not with an emphatic Time Bomb. Instead a Hurricanrana caught Phantasmo unawares in a match that was heading in the Canadian’s favour. No small part of Phantasmo’s progress in the bout was thanks to his boot; stomps to the hand and knee of Hiromu had the future champion howling in pain, and started rumour and speculation; could there be something in Phantasmo’s boot?

Ensuing weeks have turned up no solid evidence, and Phantasmo has disputed the claims. But time and again his Sudden Death superkick has seen ELP to victory, and each time his opponents have come to crying foul. Should Phantasmo load up for the strike in Osaka, he will be  a guaranteed IWGP Junior Heavyweight Champion for the very first time; can Takahashi possibly escape such a fate? 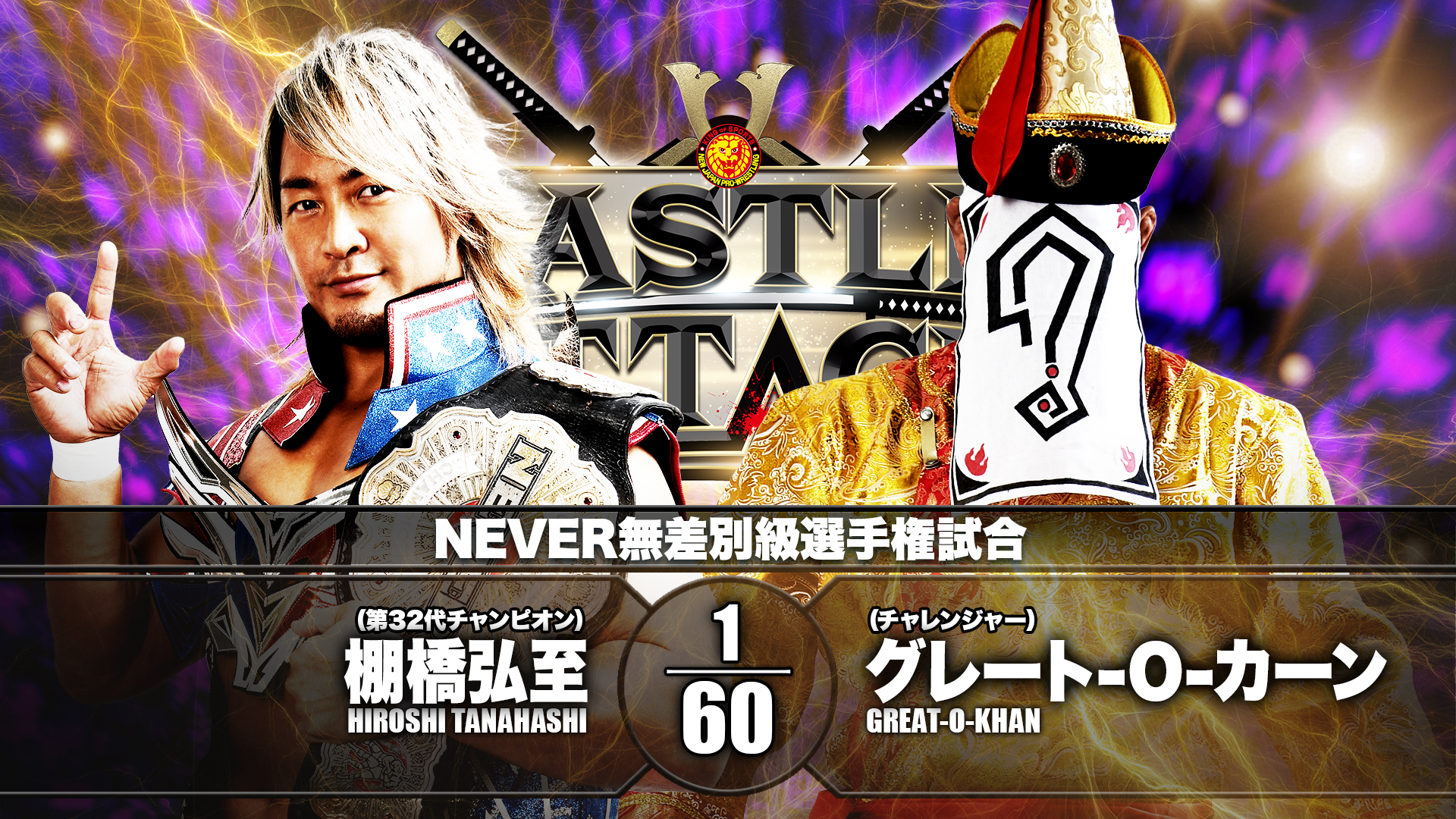 For many the highlight of the New Beginning tour was a classic bout for the NEVER Openweight Championship between Shingo Takagi and Hiroshi Tanahashi. With a High Fly Flow, Tanahashi did indeed see a New Beginning both for the title and for his career. Shingo reminded Tanahashi of the importance of a champion’s pride in the tour, and Tanahashi came to see the unique importance of what NEVER represented. But before he could celebrate with his newly acquired title, Great-O-Khan struck.

O-Khan and the United Empire were set to make an impactful presence on NJPW, with the centerpiece of their ascent set to be at Wrestle Kingdom. Yet in three singles matches, the new faction were handed three losses, including O-Khan being defeated by Tanahashi. To the United Empire, Tanahashi represents the old guard that must be eliminated for a new era to begin; to O-Khan, the historical Osaka Jo Hall and Castle Attack is a fitting stage. Could Tanahashi’s first reign as NEVER champ be a brief one? 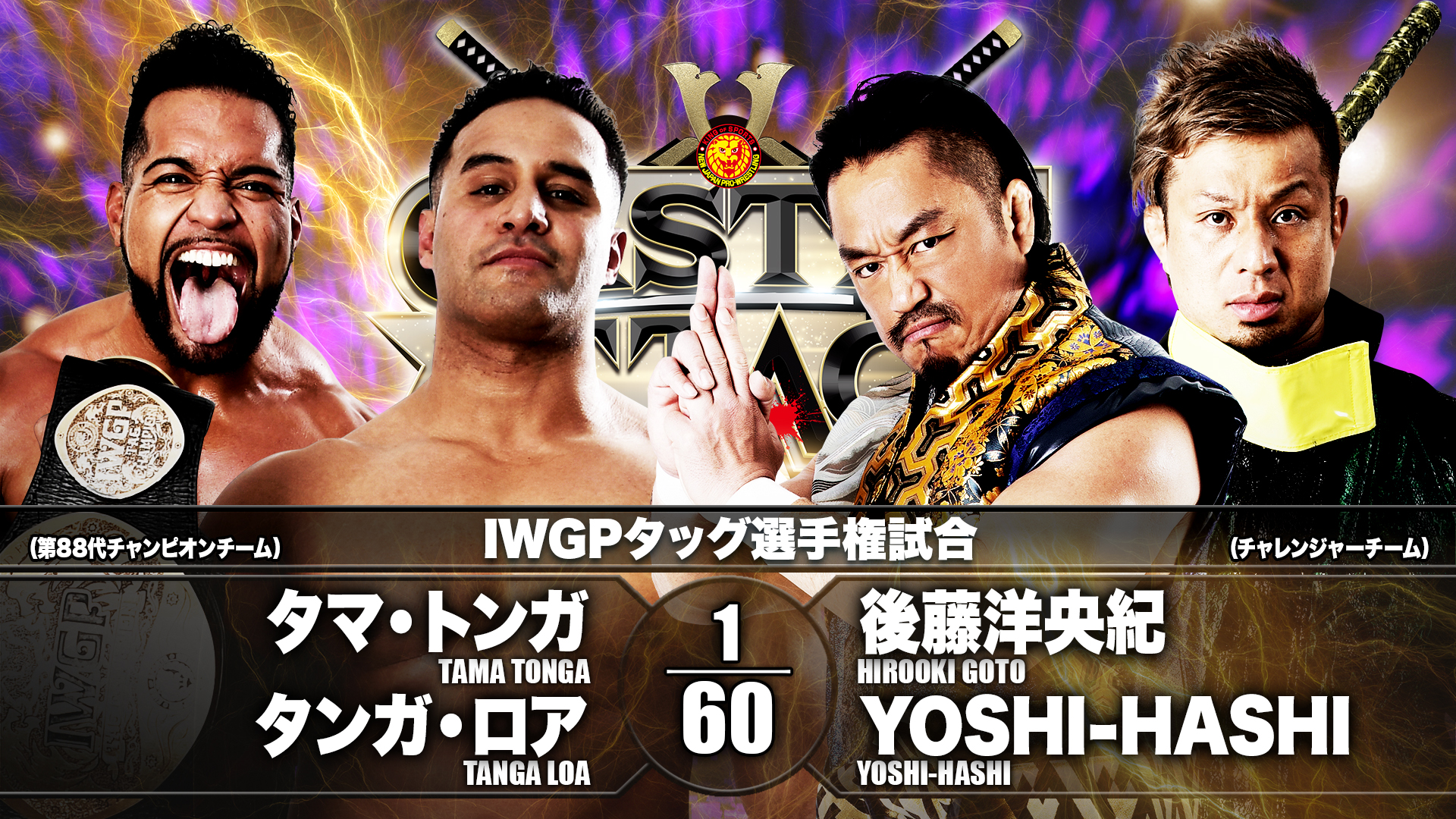 Late 2020 was a revelation for YOSHI-HASHI. After 12 long years of trying, the Headhunter was finally able to call himself a champion when he, Tomohiro Ishii and Hirooki Goto captured the NEVER 6-Man tag team Championships. In three successive defences, and elsewhere on whatever card he was on since, YOSHI-HASHI showed more fire, more passion and more heart; the fans wanted more, and so did YOSHI-HASHI.

Ever since his first championship win, YOSHI-HASHI has stated he wants more gold. On February 11, a chance arose. By pinning Tanga Loa to successfully defend the NEVER 6-Man titles, the Headhunter was also able to stake a claim to the Guerrillas of Destiny’s tag belts. He and Goto quickly challenged, but backstage, G.o.D turned the tables.

In a brutal backstage attack, the Guerrillas assaulted YOSHI-HASHI and Goto, reminding them that NJPW’s franchise team are the ones to call the shots. Now with the match made, G.o.D will seek to continue their dominance over the tag division, but could it only take an instant for the current champs to be upset and overturned? 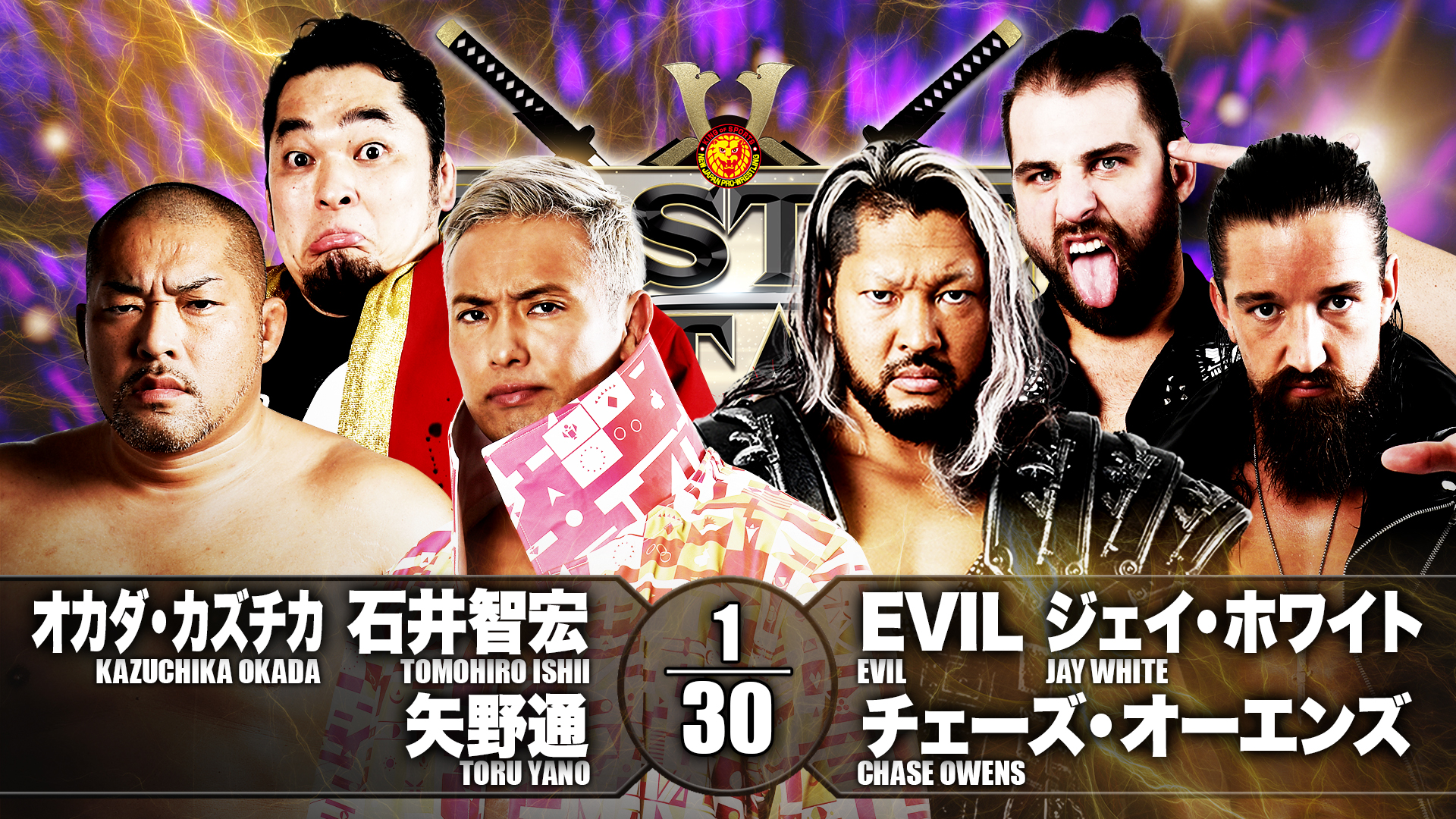 After night one in Castle Attack sees a brace of CHAOS vs BULLET CLUB singles bouts, it’s six man tag action in the second match of the evening. There is sure to be plenty of ill will remaining in the air after February 27, as well as a desire to make a mark before the Anniversary Event in Budokan Hall and the start of the New Japan Cup. What moves will be made tonight? 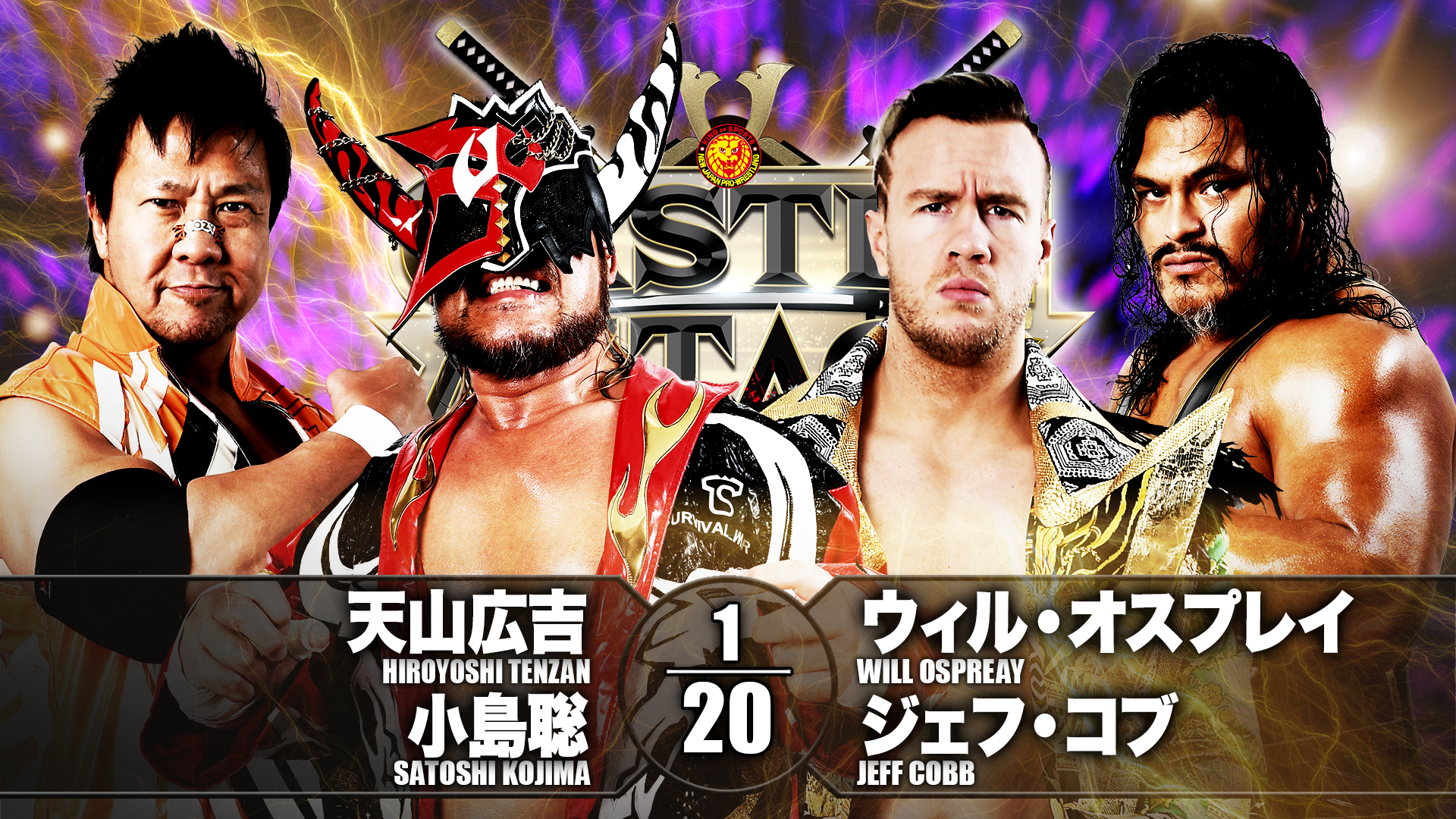 The night will kick off with TenCozy taking on Jeff Cobb and Will Ospreay in tag action. New Beginning in Nagoya saw Tenzan and Kojima fall in singles bouts to Ospreay and Great-O-Khan, but in a tag team environment, are far mroe than the sum of their parts. Can this legendary team get revenge on the United Empire in our opener?