Two variants on the strap match at play February 27 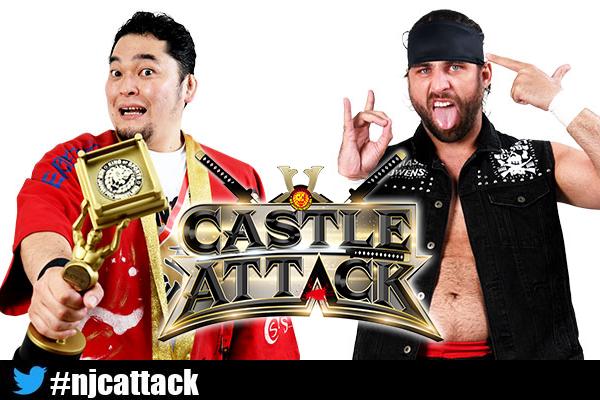 After Toru Yano captured the KOPW2021 trophy at Wrestle Kingdom 15, one figure who wasn’t happy with the situation was Chase Owens. Yano had earned his way into the four way for the trophy by entering January 4’s New Japan Ranbo last, and as such never even entering the ring. The next night, twin low blows to Owens and Bad Luck Fale led to the second trophy in Yano’s collection.

Owens vowed to put Yano in his place with his KOPW 2021 challenge at Castle Attack February 27. He proposed a Texas Strap Match, wherein the competitors have to touch all four corners consecutively while strapped to their opponent. After two days of battling Chase with the strap at play, Yano was not a fan of the strap shots, but has enjoyed the tug of wars that ensued. The result? A Yano Style Texas Strap Match, wherein instead of touching the corners, competitors must remove each corner pad while strapped to their opponent.

Which stipulation will be in effect on night one of Castle Attack? A Twitter poll begins at 4PM JST today, running for one week until February 23 for the fans to make their choice!