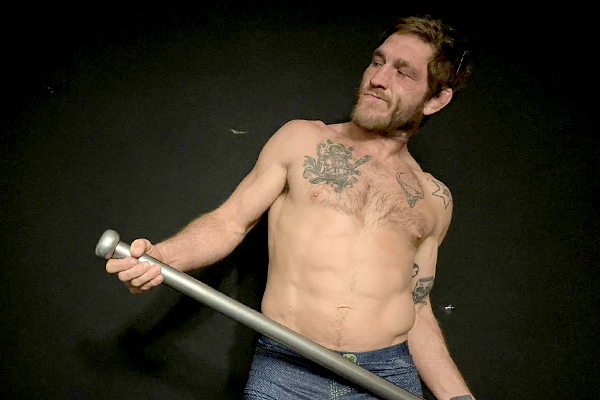 Tom Lawlor has had an intriguing journey to NJPW competition, as we saw in part one of our interview. In part two, he discusses the competition on NJPW STRONG, Katsuyori Shibata’s trainees and what’s in store for the future. 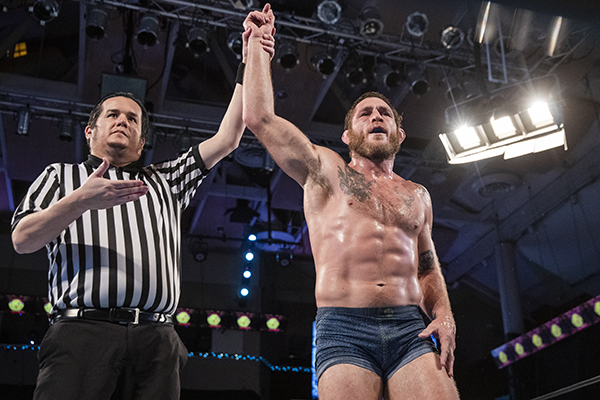 –Let’s talk about STRONG. You’ve really been one of the focal points of that program since last autumn, along with Team Filthy.

–There’s an obvious comparison to be made with Suzuki-Gun there, given your history and the styles at play.

–That’s quite the image. But there is some similarity there. Like Suzuki-Gun you’re very different individuals but there’s a common thread, and you team very well.

Lawlor: It wasn’t a careful selection process so much. It was more that I felt seeing them on STRONG that I could make it work with these guys and it went from there. And we are able to make it work, and the ingredients are definitely there.

–Had you seen the other members before they came into STRONG?

Lawlor: I’d watched quite a bit of JR Kratos. I didn’t know much of Danny Limelight. I didn’t know what was going to happen when we first teamed together, but it all worked out well, I think.

–Do you have similar personalities?

Lawlor: Hmm, me and Kratos there’s something there. We’re both tough guys, y’know. Me and Danny Linmelight, there’s not too much similar there, but we both like to talk trash. Same with Dickinson. 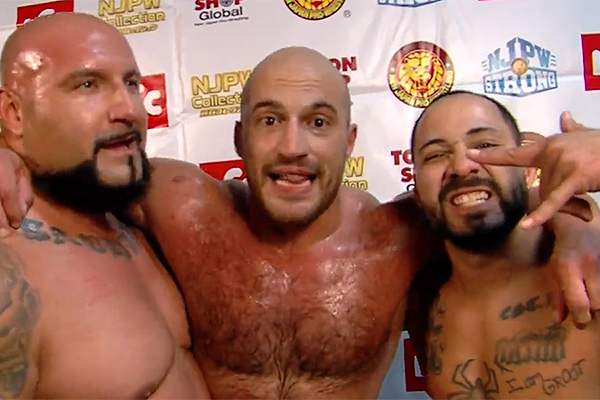 –Chris Dickinson has been a really impressive addition this year.

The moment I got hold of him, I knew it would be good 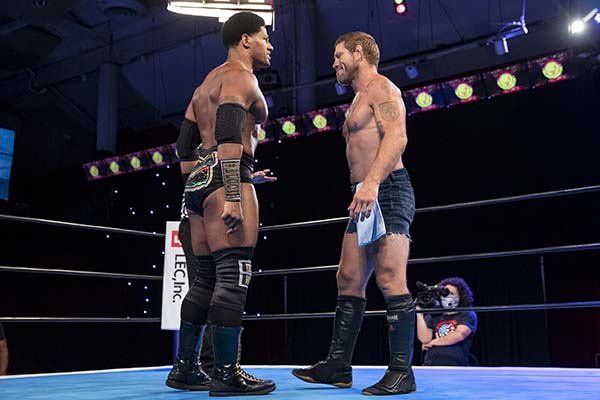 –The same can be said of the match you had with Fred Rosser last November. It certainly felt like a sudden meeting of two very different people, but there was a real chemistry in the ring, and in the end it was voted the STRONG match of the year by fans.

Lawlor: I didn’t know who I was going to wrestle until the night before. I didn’t even know Fred Rosser was going to be there. So if you told me ‘you’re gonna go to LA, wrestle in a New Japan ring, and it’s going to be against a former WWE star’, never in a million years would I have guessed it would be Fred Rosser. But the moment I got a hold of him, I knew we were going to have a good fight.

Lawlor: I don’t know what he had going on in WWE, but the Fred Rosser you see now in New Japan; it’s clearly the best Fred Rosser. I don’t think you can doubt that, but he’s much more true to himself here. He works as hard as it’s possible to work, and much as I don’t want to say it, he’s a really nice guy with a great personality. He just wants to fight, and that’s what I like to do, too. That’s where pro-wrestling is at it’s best, and that match was just two people fighting for ten minutes. 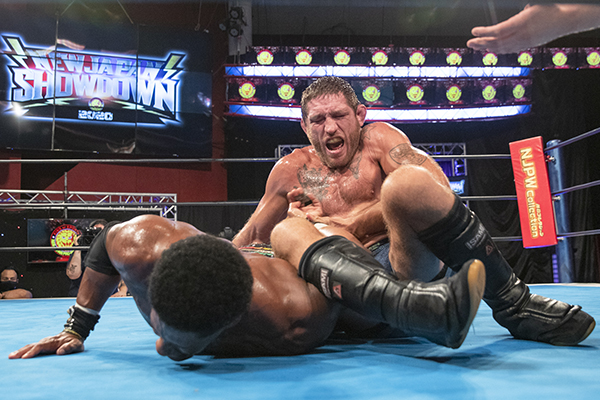 –STRONG has given a lot of wrestlers the chance to be in a NJPW ring, many of them having worked for a long time to get there. At the same time, it’s different to being on tour in Japan. What’s the experience been like for you?

Lawlor: I’m one of those people that have worked hard to get here. I’ve been a fan of NJPW wrestlers since I was a kid. So STRONG is an awesome opportunity. To be here under the New Japan banner after being outside looking in is cool. It’s a small step to a bigger goal that I have.

Lawlor: To defeat Toru Yano for the King of Pro-Wrestling 2024 (laughs).

I felt good for The DKC. I was still going to beat the crap out of him. 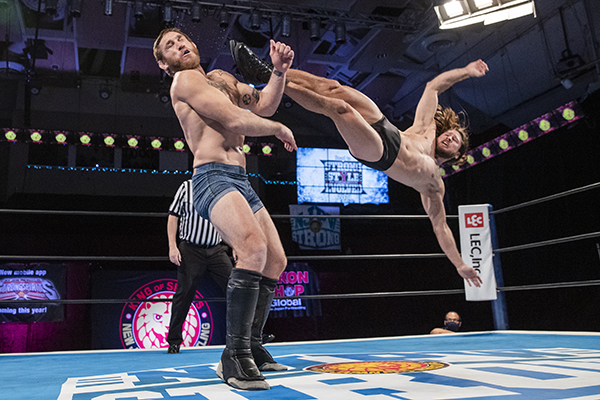 –This is the second New Japan Cup USA. How do you feel about how STRONG has progressed over the last nine months?

Lawlor: I think when KENTA won the IWGP US Heavyweight Championship briefcase, that was one turning point, because guys had something to fight for and work toward.

–Now that KENTA has had his matchup with Moxley, the Cup is a new motivator.

Lawlor: It isn’t like motivation is a problem with anybody on STRONG though. I haven’t seen anyone not give 100% in their matches. Even if they don’t win. The DKC barely ever wins, but he has the ability to see that he needed to improve, and join the LA Dojo.

–You faced the DKC in your New Japan Cup USA qualifier. You have some respect for what he did?

Lawlor: Hey, it was a great moment, an unexpected moment. I felt good for him. I’m still going to beat the crap out of him, heheh.

–How has your approach to wrestling changed on STRONG compared to other environments?

Lawlor: Well, it’s been empty arena matches, so there’s no people there, but I’m used to that honestly; in MMA I would be in prelim bouts and the high rollers with the money tickets wouldn’t some to the building until the middle of the card. So I’m used to fighting in front of a handful or no people.

–Does it focus you more?

Lawlor: It does, and I think it does with everybody on STRONG. It’s very intimate, there’s less flash. That suits me as someone who doesn’t do a lot of flashy moves. I will play to a crowd if there’s one there, but I’m not about showing off, I’m about winning my matches. That’s the thing about STRONG. You’re seeing a lot of different styles, but everyone’s very much about trying to win.

–It feels like the rest of the roster has a similar approach.

Lawlor: I’ve watched every match of NJPW STRONG, and a lot of progression is being made  by a lot of people. We’re all getting familiar with one another in this environment as well, and that’s making us hate each other a lot more. From a viewer’s perspective, that’s only going to make the matches better.

–There’s more tension in the locker rooms coming through in the ring.

If it were 15 years ago, I might have been a Young Lion instead of going into MMA 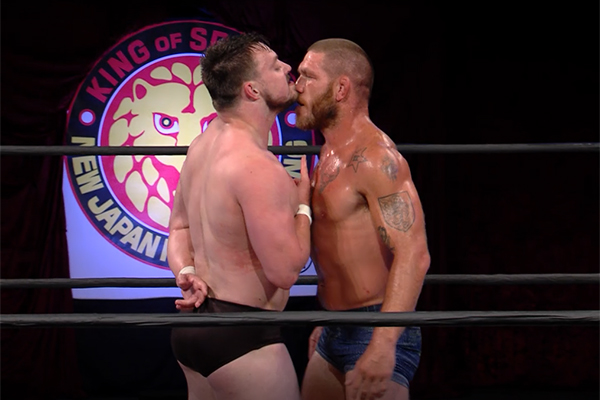 –Let’s talk about the LA Dojo locker room. You faced Alex Coughlin last summer during Lion’s Break Collision, and you’re had that match with the DKC. What’s your opinion of Katsuyori Shibata’s trainees?

Lawlor: When I watch wrestling, the Young Lion style is the style I like most.

–The strong fundamentals, no frills.

Lawlor: Yeah. Even in MMA, the techniques I like to practice are basics, fundamentals. It’s all about being in shape, being able to fight anybody at any time, submit somebody if you have to, or strike with them if you can’t take them down. That’s something you really see in these guys, especially the ones he’s been with a long time, like Alex Coughlin.

Lawlor: He isn’t a clone of Shibata by any means, but he has that tough air and aura to him. With the DKC, he’s half my size, but I still have to worry about him because of the training that he’s had, and the system he’s gone through.

–So you have a lot of respect for what the LA Dojo is producing.

Lawlor: Honestly, if I could go back in time 15 years, maybe I would have gone down that path if I had the opportunity. But hey, now I’m going to beat the hell out of them instead.

–They still need to know their place in the pecking order. 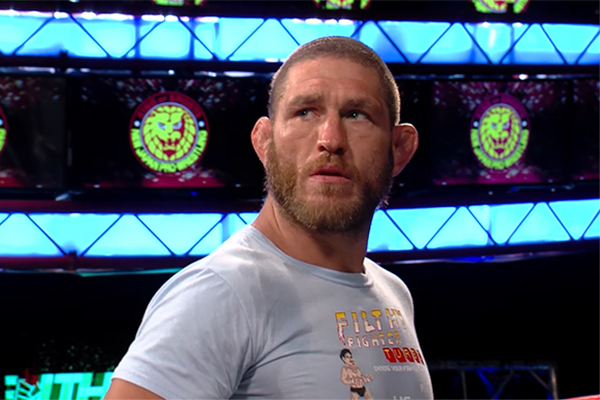 –So, on the verge of New Japan Cup USA, what’s the plan for Tom Lawlor moving on, and hopefully into a post COVID era?

Lawlor: I’ve made the mistake in the past of looking too far into the future, and things don’t work out always the way you want to. So I’m a short term planner. The way I push myself, the way I fight, I might not be here tomorrow. So in the meantime, New Japan Cup USA. That’s the goal.

–You’re focused on what’s in front of you.

Lawlor: I’ve always done very well in tournaments, typically, and I don’t think this will be any different.

–Is a trip to Japan in the books for you and Team Filthy?

Lawlor: I don’t have a ticket booked. But I’m willing to earn it. I want to be there because I belong there, and that’s the end of it. And then long term? KOPW 2024. Get ready Yano.