–Let’s finish up our look at 2005. The year ended with you wrestling in Korakuen Hall on the Christmas Day ‘Dream Win’ card. You took on Hirooki Goto, defending the IWGP U-30 title. It was quite the year for Goto; he won the Young Lion Cup, and before he went on excursion teamed with Ryusuke Taguchi and won the IWGP Junior Heavyweight Tag Team Championships. He really outgrew the Young Lion status.

Tanahashi: He really had grown a lot and then he was stepping up to me. For that match, more than what went down in the ring, what I remember was how salty the crowd was. I didn’t get booed on the regular until after I won the IWGP Heavyweight title for the first time in 2006; I wasn’t in that position at this point in time, but as soon as I came through the curtain, people were yelling some pretty awful stuff.

–Looking at some of the magazine reports from the time, you shot the crowd some pretty angry looks, and you were pretty aggressive in the match.

Tanahashi: There were a few of those anti-Tana voices even then. I didn’t handle it too well; I gave back as much bad language as I was getting, not like the sophisticated Hiroshi Tanahashi of today (laughs). They didn’t quote me in that magazine article did they?

Tanahashi: I don’t think they could (laughs). Not exactly becoming behaviour. But I think with everything going on with the company at the end of that year, it was just a lot of stress coming out. I remember after that match, Nakamura came and checked up on me, which was good of him.

–You ended 2005 with Goto, and began 2006 on January 4 taking on his high school classmate Katsuyori Shibata, who was in Big Mouth Loud at the time. How did the two compare?

Tanahashi: At that point, there was a lot of makeshift booking going on, even when it came to the big cards. So I wanted to make the most of that little narrative going from Goto to Shibata. Shibata beat the hell out of me though. I went from dominating Goto to getting destroyed in the Dome, so I set up my own downfall, heh.

–Goto was part of the same 2002 Dojo class as Shinsuke Nakamura and Ryusuke Taguchi. Yoshitatsu was in that class as well, along with since retired Hiroshi Nagao and Akiya Anzawa. Quite a notable class; what are your thoughts on the group?

Tanahashi: Nakamura definitely had something special, but Taguchi took to the training best. He was just a machine, no matter what was asked of him he was able to handle every single drill without slowing down at all. He and Goto had a great sense for the business. Even though Nakamura got the super rookie treatment, it was still with the recognition that Taguchi and Goto were super capable. Nagao never really got the hang of moving in the ring right. He was an ex volleyball player, tall, great vertical leap though. So when they all came in, it really did seem they had some phenomenal talent at the ready. Yoshitatsu, eh, maybe not (laughs).

Tanahashi: Taguchi really had his guard up I think. I couldn’t figure out what was underneath with him at all, what he was really like. When they first came in, I was the Dojo leader so they were interesting to watch. I remember Yoshitatsu really saw Nakamura as a rival and had it in for him, but he wasn’t on Nakamura’s radar in the slightest (laughs)

–I would imagine Taguchi’s role was to ease that tension.

Tanahashi: Yeah, I think you’re right. He was smart even back then in ’02, he handled everybody well. Especially Yoshitatsu; he realised the key to putting him in a good mood was praise. Yoshitatsu had so much self confidence, regardless of whether he had actually achieved anything or not (laughs). I think that was something that really got to Nakamura. But in the end Yoshitatsu managed to wrestle in WWE, Nakamura’s there now, so even though they didn’t like one another, they both got to the biggest company in the world. 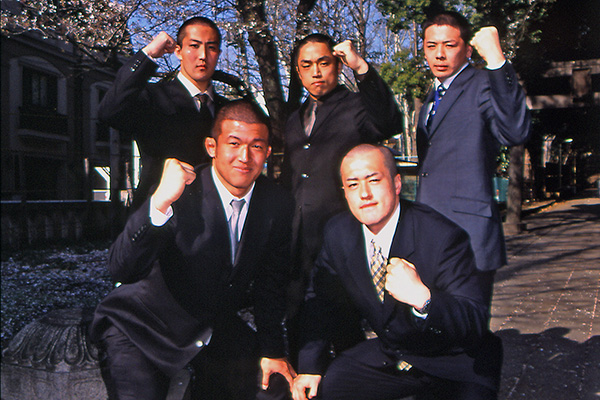 –I think a big part of Yoshitatsu leaving NJPW in 2008 was that so he could go to WWE and try and surpass yourself and Nakamura. He was in that system when Antonio Inoki was inducted into the WWE Hall of Fame in 2010; apparently Inoki said to him that ‘the slowest starter got the furthest of all’ and that made him really happy.

Tanahashi: Yoshitatsu definitely felt that he’d overtaken Nakamura, but Nakamura got him in the end in terms of results (laughs). I think the dynamic between those two was the most interesting thing to come out of that ’02 class. I remember when I was the Dojo leader I felt I should act as a go between for those two. I went and bought a bunch of beers and chu-his and got the Young Lions together for a drinking session in the dining room one time. I thought it would break the ice with those two, but it all ended with them saying they didn’t respect one another and everything just got really awkward. Hey, I’m a wrestler, not a life counselor (laughs).

–The consensus seems to be that Yoshitatsu was a bit of a whipping boy in the ’02 class. As the Dojo leader at the time, what’s your view?

Tanahashi: Ahh, I was a bit of a lax dorm head though. I didn’t get mad much. Like Yano, he was super strict, when it came to training and the day to day Dojo life. I’m glad I wasn’t his junior.

–Yano also entered in 2002, but just before his juniors. Plus with the amateur achievements he had, it put him in a bit more of a senior position.

Tanahashi: It felt like he was almost *my* senior (laughs). But even though we’re really different people, we got on super well. Whatever we did, I had a lot of fun with him. He’s an excellent communicator.

–That’s partly why he can have his fingers in so many pies, so to speak. How was Goto?

Tanahashi: Nakamura and Yoshitatsu were very bold about wanting to go right to the top, but Goto kept himself to himself much more in that regard. He was a lot like Taguchi; Taguchi would often say that he wanted a career more like El Samurai’s, with a long tenure.

–Nagao would leave NJPW in January 2006 and join HUSTLE.

Tanahashi: He had the physical tools, definitely, but just not the right mindset as a pro, in my opinion, then he just kind of left. But of all the guys in that class, I was on his level more than anyone when it came to talking one on one. But then when I was trying to be the senior guy and call him out when he was doing something wrong, he would just go ‘ah, c’mon…’ He didn’t take a single word in at all!

–A little too laid back…

Tanahashi: He was blessed with this incredible physique, but sometimes that can work against you; or at least you have to work even harder, expectations are different. I’ve seen a lot of big tall guys come in and check out relatively quickly. You soon find out who really wants it, and I think at the time the conditions that HUSTLE were offering were more attractive to him.

–Anzawa would leave in January 2006. You would write that you were saddened at him leaving.

Tanahashi: He was a prototypical Young Lion. He really wanted it, came into NJPW because he loved it, but obviously couldn’t see the future for himself that he wanted and decided to leave. It was a real shock to my system, and it really sparked something in me to raise the status of NJPW.

–In all it was an impressive class of recruits.

Tanahashi: It really was, and of the guys that stuck with it, everyone made their marks. Taguchi has stayed fresh all these years, had exactly the kind of career he wanted to have when he was a Young Lion. I think they’ve all turned out to be juniors I can trust.