Nagata and SANADA would tie up for the second time in the span of a month for the first of the day’s two tournament matches. A feeling out process in the beginning saw Nagata gain an early edge, but as he looked to take SANADA over with a cravate, the LIJ member flipped and landed on his feet; as pace quickened, SANADA would miss a dropkick, but evaded a Nagata follow-up strike to return to a stalemate. 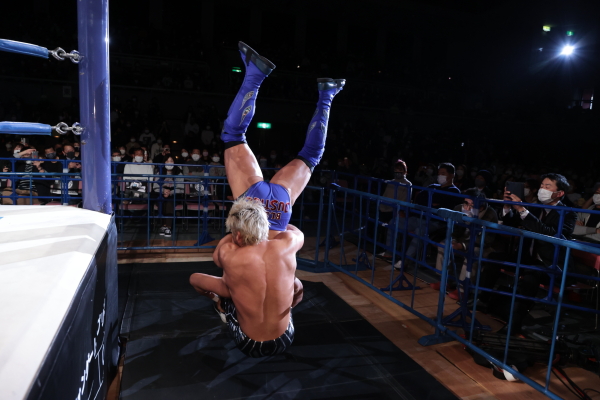 It was a test of strength that gave SANADA the advantage. SANADA would suplex out of the Greco Roman knuckle lock, and land a dropkick to take Nagata to the floor, where he was dropped hard by a Cold Skull piledriver.  In the ring, Nagata would stop SANADA’s run of offense with a knee buried to the gut, and followed with sharp left kicks, through gritted teeth; a butterfly suplex would give two to Blue Justice, but SANADA would respond with a Frankensteiner, dropkick and plancha to the outside. 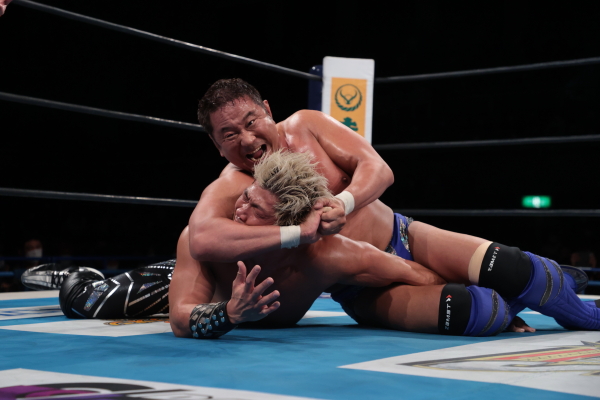 SANADA attempted to push the advantage with a springboard dropkick back inside, but Nagata would fire back with an Exploder, only to be dropped by a TKO. A Magic Screw later, and SANADA went for an early Moonsault, but only found the canvas as the match passed the ten minute mark. Nagata would capitalize with a knee into the corner, and withstood a series of forearms from SANADA before connecting with a huge top rope exploder, but was unable to get the victory.

Like his opponent, Nagata attempted to end the match a little too soon with a backdrop suplex, but as he was countered into a Japanese leg roll clutch, sprung the trap for SANADA into Nagata Lock II, forcing his opponent to struggle to the ropes. Nagata would follow with his own original version of the Magic Screw, but still unable to finish SANADA, went for a suplex that saw Cold Skull float over and lock in Skull End with hooks in at the 15 minute mark. 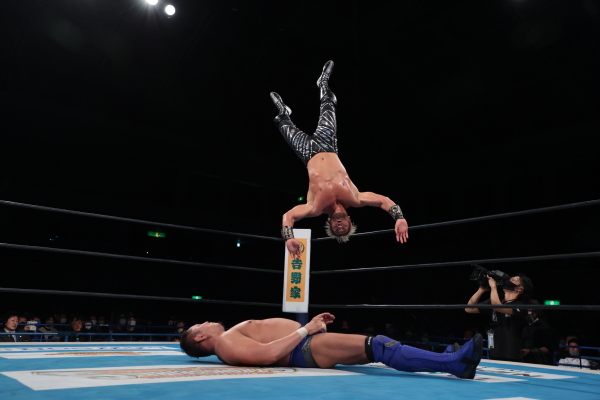 Nagata would escape the hold and fire up at SANADA would stiff forearms, asking for the same from his opponent. An enzuigiri and flying heel kick would follow for Nagata, but SANADA would be able to maneuver out of the corner with a back flip back into Skull End. This time he would let go of the hold to go up for the Moonsault, and with no movement from Nagata, scored the three. 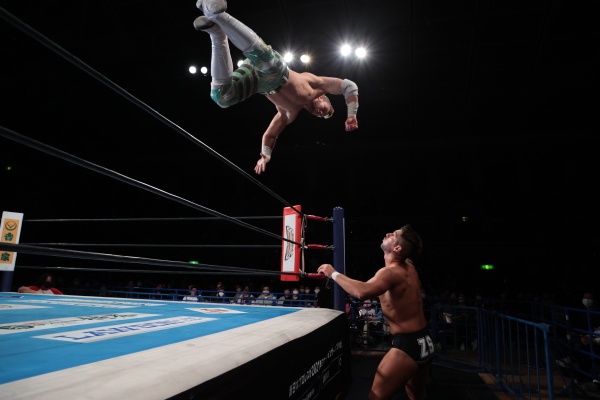 The main event of the evening would see Will Ospreay face Zack Sabre Jr. for the first time in 13 months. Perhaps aware that a shoulder injury aggravated 24 hours prior would hurt him in the long run, Ospreay would explode out of the gates on ZSJ, with a dropkick, plancha to the outside and springboard forearm; ZSJ would counter an OsCutter attempt into a frighteningly near two, but Ospreay would kick out, leaving Sabre to settle in on the British heavyweight Champion.

Quickly finding the left shoulder of Ospreay, ZSJ would wring up the arm of his opponent, but still couldn’t slow the United Empire leader for long. Ospreay would take Sabre out to the floor with a single legged dropkick, and sent the Suzuki-Gun member into the guardrails ringisde before dropping a knee across the back of ZSJ on the apron. 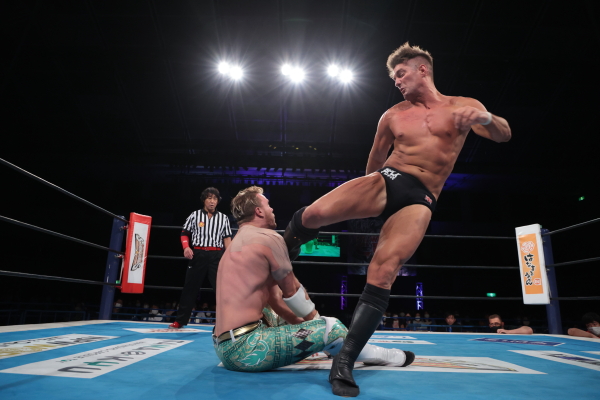 In a position of control, it was Ospreay now slowing Zack, targeting the lower back as he dictated the pace, his shoulder troubling him less with every right handed chop. Keenly aware of his opponents tactics, Ospreay would read a kneebar counter, using the chance to lace the legs for a bow and arrow; he did not however see an arm drag coming that would allow Sabre to go right back to the hurt shoulder.

Acting on instinct, a springboard overhead kick bought Ospreay enough time to get some circulation back into the shoulder, but the right handed Ospreay would still strike with his weakened arm; Sabre would catch a chop and looked to put his opponent in another hold but was instead stopped and dropped with a reverse Bloody Sunday that bought a two count. 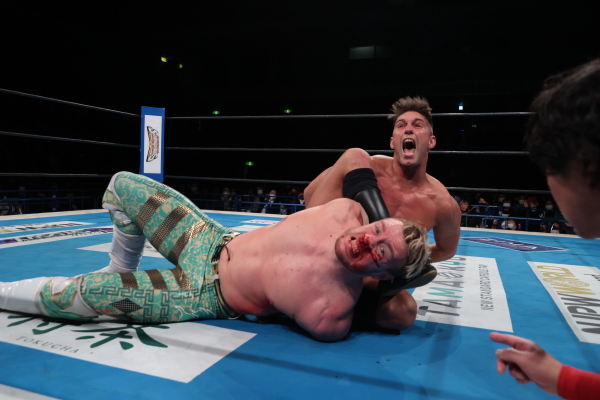 A hard shoulder breaker from ZSJ though, and though the momentum didn’t shift all the way over to Sabre, damage was clearly done. Ospreay would block a Crucifix from Sabre and hoisted him upward, but as the shoulder gave, a thunderous penalty kick threatened to shut out Ospreay’s lights.

Still, the strength of the Commonwealth Kingpin persisted, Ospreay powering Sabre to the top rope for a kick into the corner, and the OsCutter following for two. ZSJ would fight back, rolling Ospreay up for two, but an almighty elbow would be the response; as the match continued to be impossible to predict, ZSJ landed La Mistica into a Clarky Cat attempt, and a counter from Ospreay was met with a Zack Driver for an incredible two. 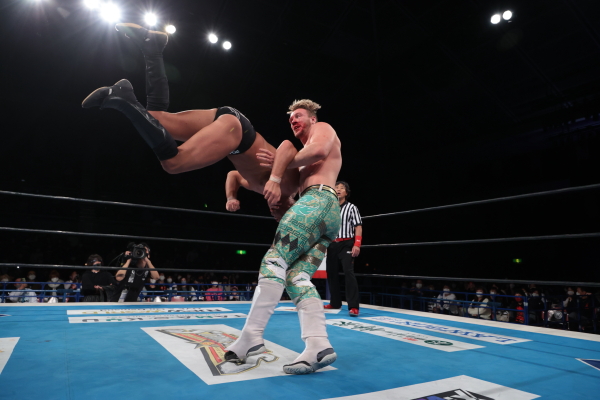 Neither willing to back down, Ospreay powered Sabre up to the top rope even from a crippling arm hold. Ospreay would look for a top rope Stormbreaker, countered into a spectacular top rope take down; as blood streamed from a smashed nose, Ospreay still managed to make the ropes from Clarky Cat.

Sabre wanted a finishing PK, but that too was denied by the power of Ospreay; ZSJ got the strike out of a backslide, but Ospreay would fire right back, and countered another Zack Driver attempt with a Hidden Blade and Stormbreaker. 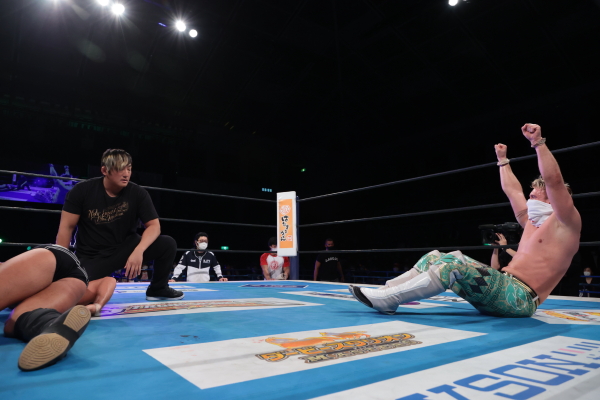 Will Ospreay will now face SANADA in the quarterfinals on Thursday March 18 in Shizuoka.