With the New Japan Cup behind us, we now head to Sakura Genesis. Ryogoku plays host to the spring spectacular for the first time since 2018, as cup winner Will Ospreay does battle with Kota Ibushi in the main event for the IWGP World Heavyweight Championship. 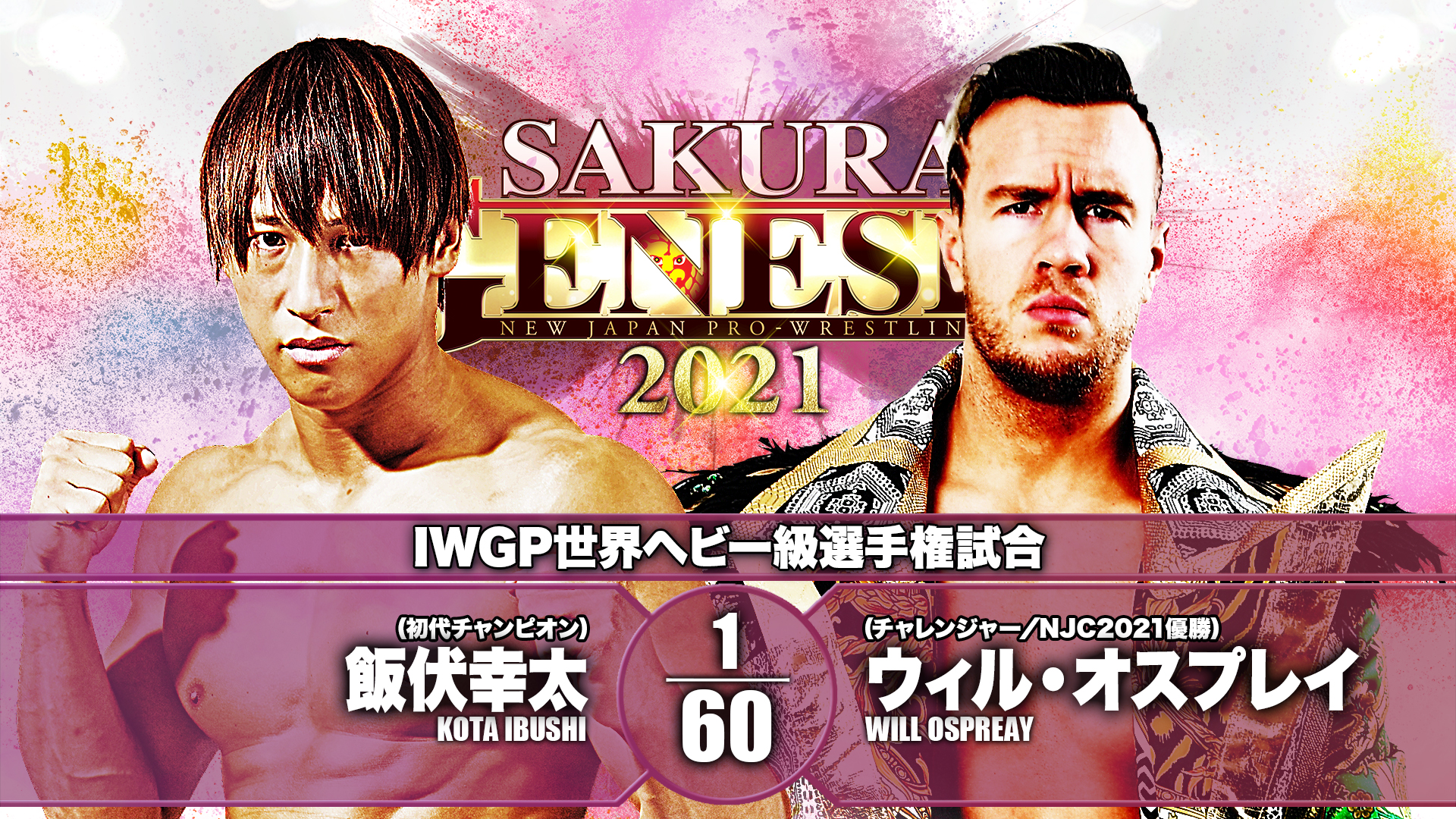 The main event will see the first ever defence of the IWGP World Heavyweight Championship when Kota Ibushi goes head to head with Will Ospreay. As Sakura Genesis returns to Ryogoku Sumo Hall, so too does a British IWGP challenger, echoing Zack Sabre Jr.’s 2018 victory, and creating an appropriately international feel to this main event.

Ospreay’s number one contendership status was earned after a 30 minute war with Shingo Takagi that showed off the Commonwelath Kingpin’s effortless ability to change gears between high flying high risk offense and intense, focused punishment. It’s an ability that has evolved within Ospreay since making the transition to heavyweight; a transition that arguably began with the first ever in ring meeting between these two men.

At Wrestle Kingdom 13, Ibushi and Ospreay competed for the NEVER Openweight Championship in what Ospreay addressed at the time as a ‘dream match’, but which became a nightmare for Ibushi. With a new level of intensity unseen in the then fan friendly junior heavyweight star, Ospreay unleashed a Hidden Blade to the Golden Star that would put Ibushi on the injured list for the ensuing month.

While encounters that followed in the 2019 and 2020 G1 Climax tournaments would see Ibushi come out on top, the end of G1 Climax 30 would have Ospreay betray Kazuchika Okada and CHAOS. Forming the United Empire in the wake of a destroyed friendship signalled to the world that friendships and alliances were expendable, and a fair price to pay for ultimate glory; Ospreay is more than willing to accept that it’s a lonely spot at the top, and will stop at nothing to take the World heavyweight gold.

As for Kota Ibushi, it is perhaps only recently that the Golden God is understanding the unique weight of his position as champion, and the gravitas that comes with the decisions he makes. Unifying the IWGP Heavyweight and Intercontinental Championships under the World Heavyweight banner has proven controversial to say the very least. Tensions felt during tag team matches at the New Japan Cup’s closing weekend suggest that he has strained relationships with his peers in hontai and NJPW at large. Support for Ibushi to defeat Ospreay in Ryogoku will likely be near unanimous however; will the extra man make the difference next Sunday? 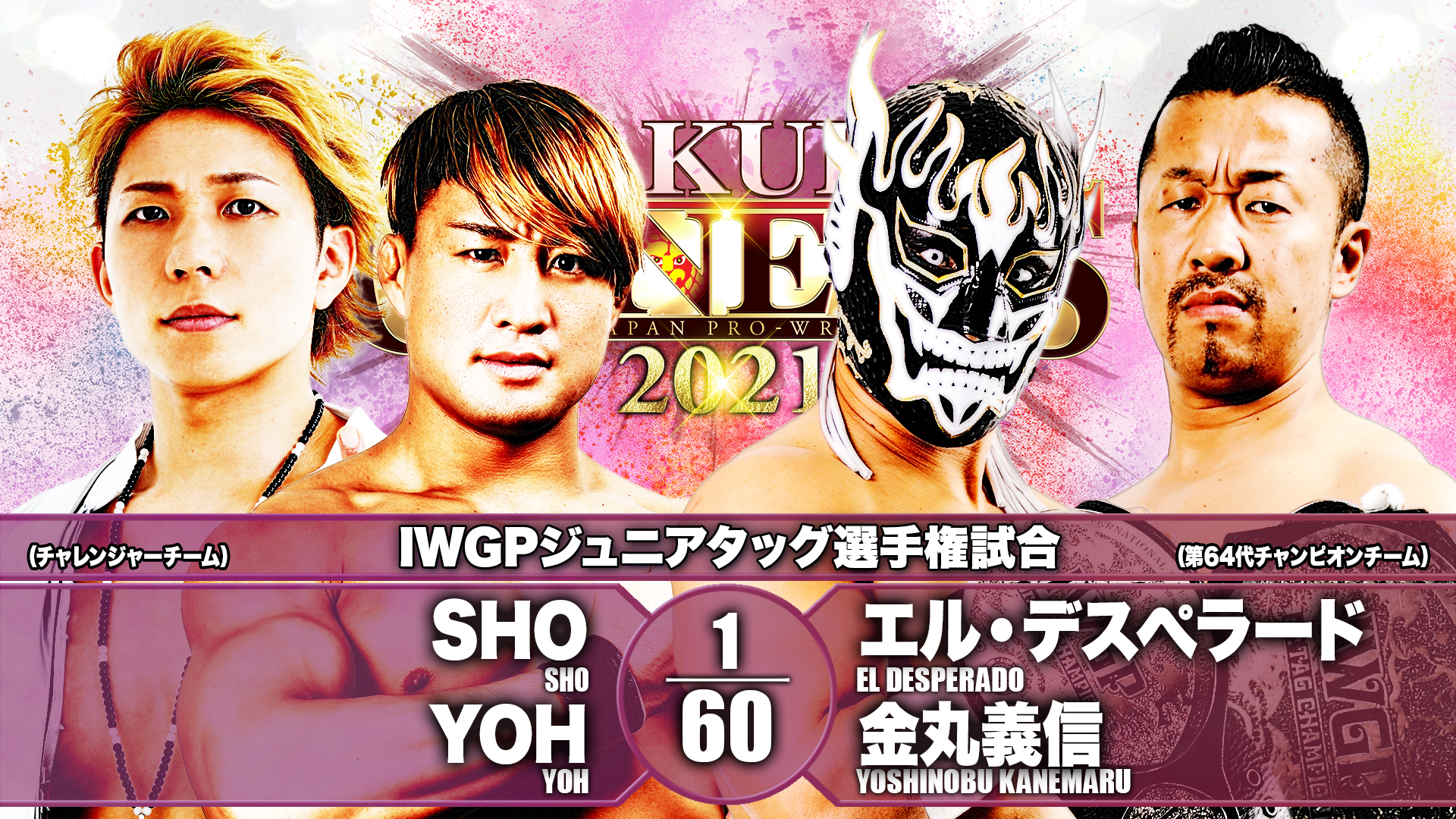 After the best part of a year on the injured list, YOH returned from knee injury on March 21 in Sendai, and immediately made a challenge to El Desperado and Yoshinobu Kanemaru. When YOH was injured last summer, he and Roppongi 3K partner SHO were forced to relinquish their IWGP Jr. Heavyweight Tag Team Championships; belts that Desperado and Kanemaru would win in September. A three year long rivalry links these teams together; has Roppongi 3K’s bond grown stronger during YOH’s absence? Can El Desperado’s momentum as double junior heavyweight champion be stopped? It all adds up to a thrilling tag team title match in our semi-main event. 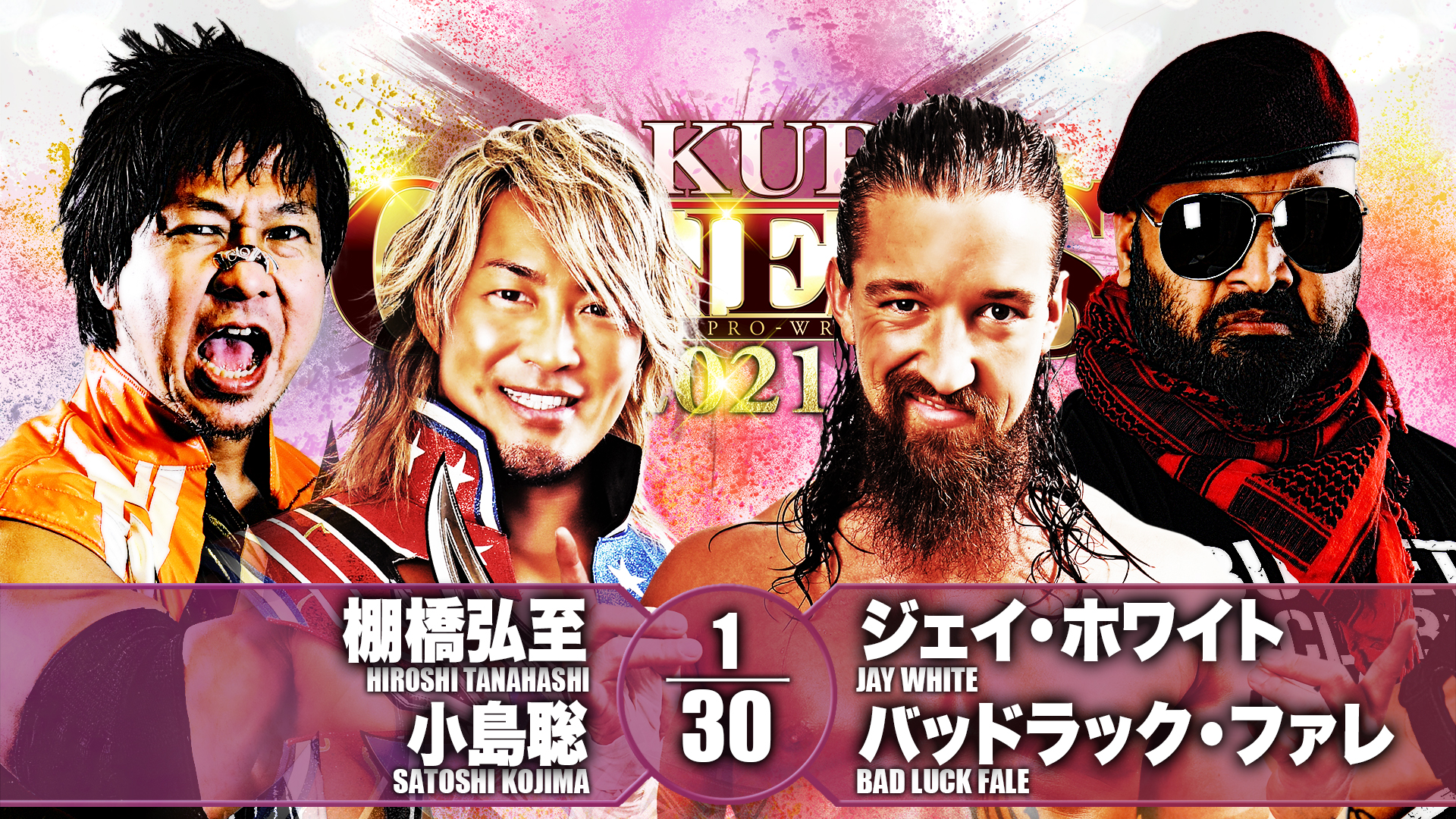 After Hiroshi Tanahashi was eliminated in the second round of the New Japan Cup by Jay White, and White himself was upset by David Finlay in the tournament quarterfinals, it’s fair to say that the spring classic tournament didn’t work out the way the Ace nor the Switchblade had hoped. As Kota Ibushi heads toward the first defence of the new IWGP World Heavyweight Championship tonight, White is angered at what he perceives to be an erasure of his legacy and name in the record books.

His ‘plan B’ post New Japan Cup  elimination then, will be to create a new legacy for himself. Before Wrestle Grand Slam approaches in May, White wants to achieve an unprecedented grand slam of his own; to become the first to ever win the IWGP US Heavy, IWGP Intercontinental, IWGP Heavyweight and NEVER Openweight Championships. The barrier to that achievement? The current NEVER title holder Hiroshi Tanahashi. Tanahashi has been evasive over White’s challenge up to now, and the Switchblade will likely attempt to make his point more forcibly tonight in Ryogoku. Yet, as Tanahashi teams with a Satoshi Kojima who ahs been nothing but impressive and hungry for results thus far in 2021, he might have a tougher time than planned getting that point across. 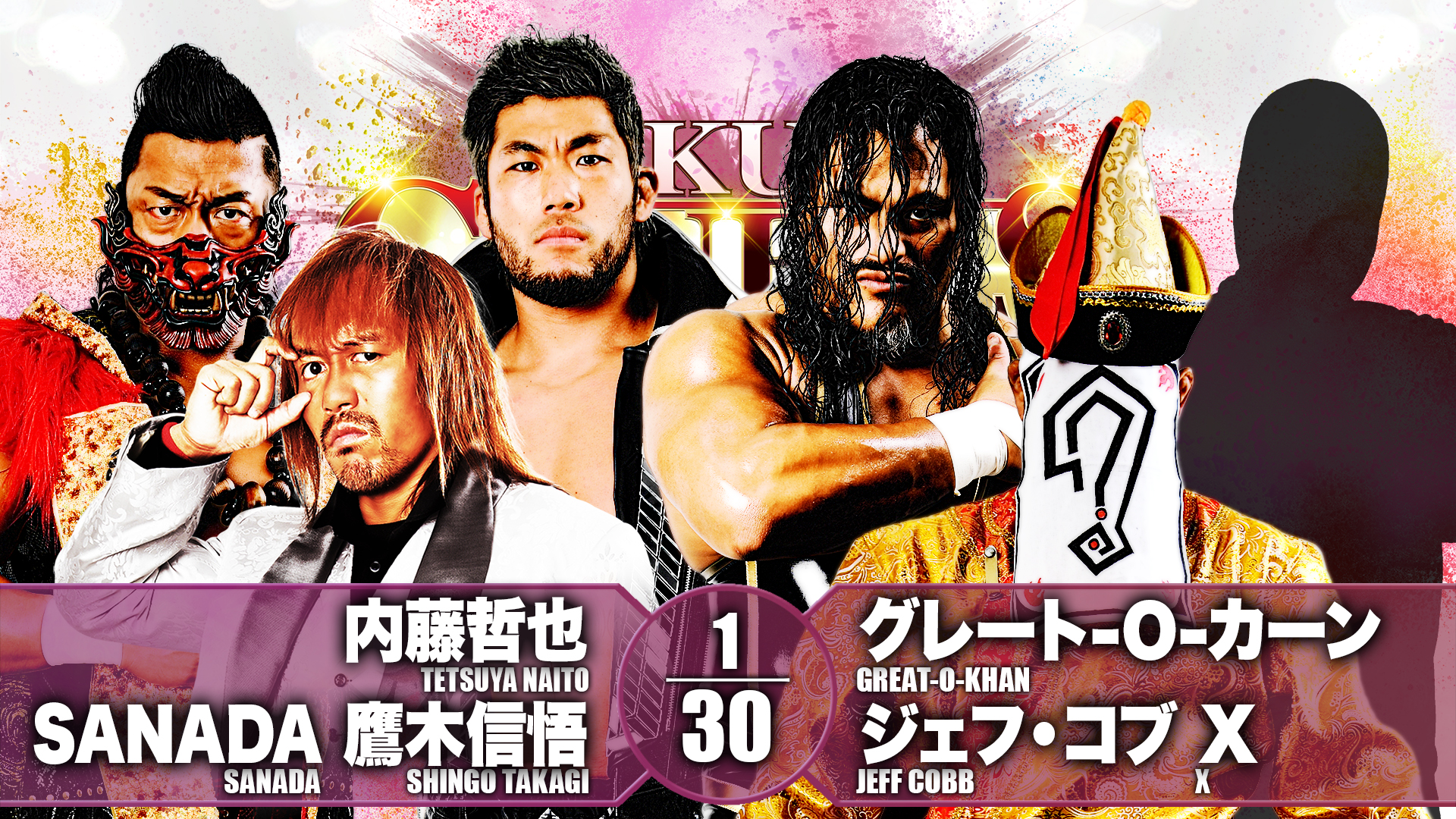 During the New Japan Cup final weekend, both Jeff Cobb and Great-O-Khan alluded to the United Empire’s forces getting stronger, stating that they had a ‘secret weapon’ in mind to aid their continued advance. Tonight it appears as if that secret weapon will be unveiled, as a mystery partner will join them for this six man tag team match. Who might it be, and what will the empire have in store for LIJ? 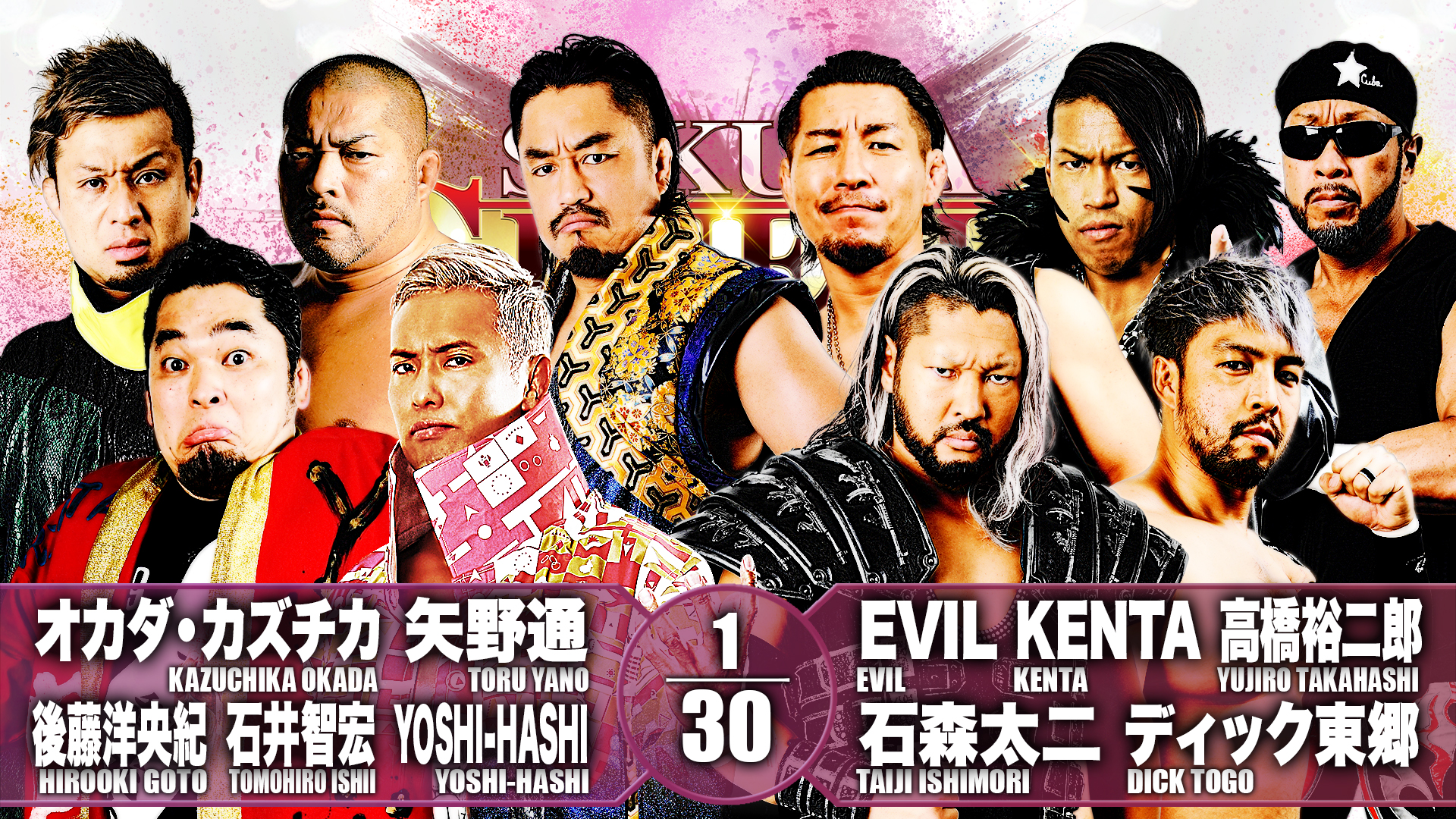 CHAOS and BULLET CLUB have been at one another’s throats all the way through 2021 thus far, and that factional warfare continues tonight in eight man action. Sunday in Sendai, a BULLET CLUB beatdown of YOSHI-HASHI would be followed by KENTA stealing the Headhunter’s ceremonial staff, while Yujiro Takahashi floated the possibility of a championship match against NEVER 6-Man champions YOSHI-HASHI, Goto and Ishii. The champions won’t back down from a fight, and Kazuchika Okada will be more than happy to fill the CHAOS ranks as they head to war in Ryogoku. 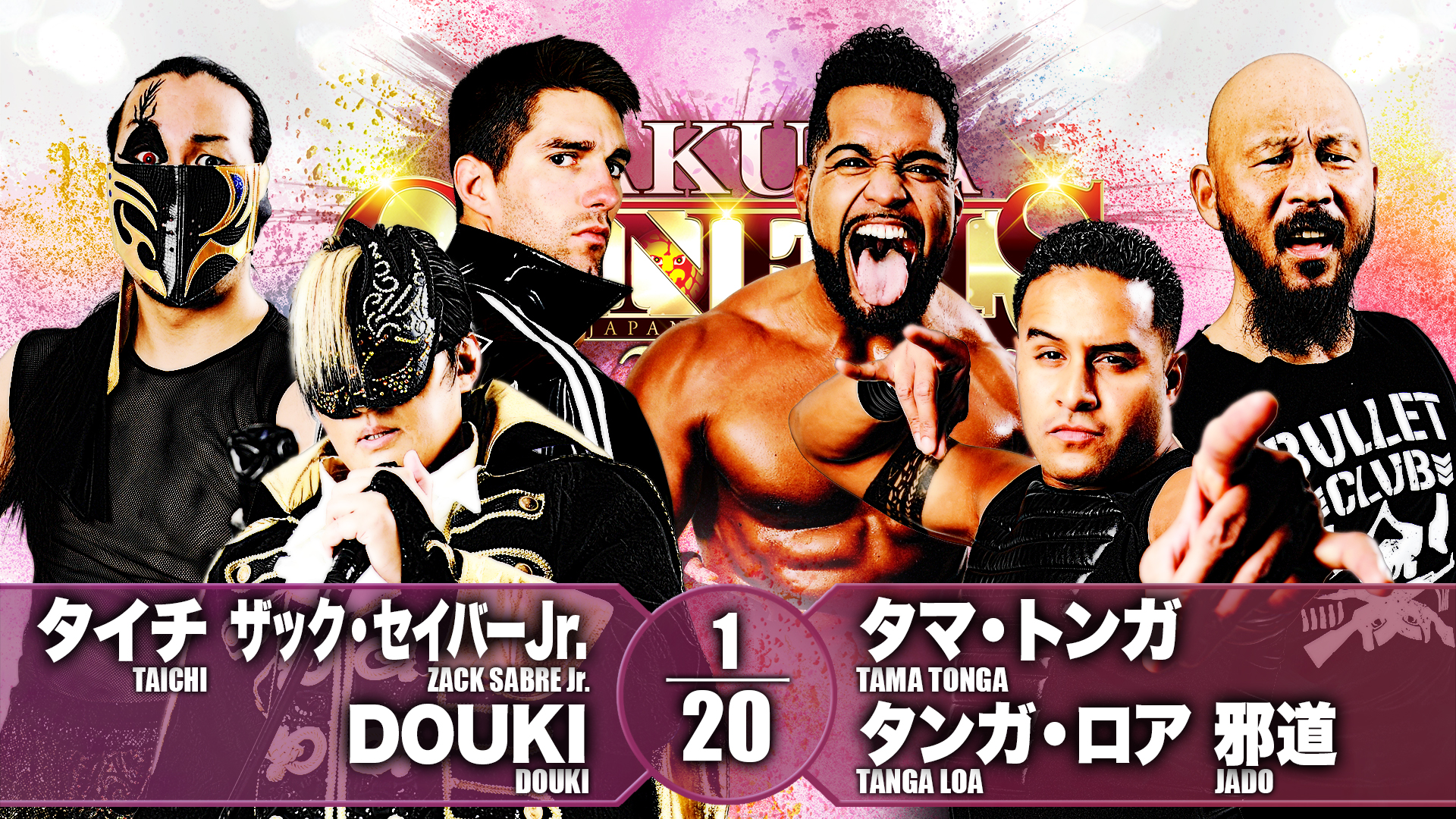 The first matchup of the night will see Dangerous Tekkers get reacquainted with the Guerrillas of Destiny in six man action. After their last challenge for the IWGP Tag Team Championships ended in disqualification defeat, Dangerous Tekkers took time away from tag action to focus on the New Japan Cup. After hard fought exits however, the two decided that they were stronger as a team, and wanted back in the championship hunt.

With encounters in World Tag League, Wrestle Kingdom, and New Beginning in Hiroshima, all centered around Tama Tonga’s use of Taichi’s Iron Fingers From Hell, will this next challenge, if accepted by the champions, play out any differently? Dangerous Tekkers will look to establish a new pace in this feud tonight as action gets started in Sumo Hall.