–So let’s continue our look back at 2006. On May 13, a new project within NJPW started known as Wrestle Land. The first card took place in Shinjuku FACE.

Tanahashi: Ahh, that’s a blast from the past. It was around the same time as Lock-Up as well, right?

–Right. Lock-Up was produced by Riki Choshu and had a ragged, hardcore presentation. Wrestle Land was the exact opposite. The catch phrase was ‘wrestle happy land’, and there were skits, more character based material. It was very entertainment focused.

Tanahashi: We did it for just about a year, right?

–Almost exactly, in fact. There were 9 events running until May 1, 2007. You were the ace of Wrestle Land, really.

Tanahashi: Well, kinda. That was the plan, but I got hurt in the middle there, so it all became ‘Nakanishi Land’ (laughs).

–It certainly did become a showcase for Nakanishi! Really though it felt like a reactionary move to HUSTLE’s media attention at the time.

Tanahashi: It really spoke to the trial and error we were going through to try and draw people back to the buildings. It wasn’t around long, but there were elements there that influence the current product, I think. One of the things I decided to do for Wrestle Land was go back to the classic short black tights for those cards, to try and build a bit more of a mysterious narrative for myself. But then there were fans yelling at me to go back to being a Young Lion on the main shows too, so (laughs).

–That first Wrestle Land card saw you beat Tiger Mask in your first singles match together.

Tanahashi: Right. I wanted to change up my style for these shows as well, so I used moves I wouldn’t normally. I won with the All Out (a modified Rock Bottom).

–You wouldn’t use the All Out until you faced Tetsuya Naito at Dominion ten years later. The main focus of Wrestle Land was a core Wrestle Land army taking on a group of new stars and the Makai Club members led by Kantaro Hoshino. Then there was Jado and Gedo teaming with ‘Hokkai-do’, who fans now know as Taichi, and ‘Berna-do’ (Giant Bernard). There was Gran Naniwa of Michinoku Pro, independent caveman wrestler Tsubo Genjin and a lot of other talent from different companies. It was… different.

Tanahashi: I was in that ‘do’ stable for a bit; I became ‘Wrestle Lan-do’. I did segments with this lady reporter, all sorts of stuff.

Tanahashi: I think in a lot of ways Wrestle Land was ahead of its time. It didn’t take itself too seriously, and I think the fans of today might dig more of that kind of thing. ‘Tight shots’ aside (laughs). 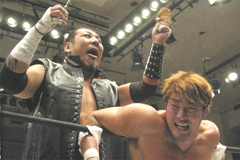 –All in all, what was it like to be the focal point of that little brand?

Tanahashi: I wasn’t sold on the concept when I first heard about it. I mean, I had passed up an offer from HUSTLE to stay in NJPW, so I really didn’t get why we were now trying to copy what they were doing. So in the end, I just felt ‘OK, if we’re doing this, I’ll do my best with it’.

–You weren’t happy with it?

Tanahashi: With the benefit of hindsight I should have thrown myself more into that kind of thing while I was still young, but at the time I was putting myself under pressure, and I didn’t feel I had the luxury. I think the company saw that I wasn’t all the way into it, and then Nakanishi just steamrollered through and became the star (laughs).

Tanahashi: TARU cutting my hair was a shocking deal.

–On the October 8 Korakuen card. You were wrestling under a mask as Masked Devilock wrestling Makai Club’s Makai Masked Devilock. After the match the Voodoo Murders stable intervened and TARU removed your mask and cut your hair.

Tanahashi: I was proud of that hair! Actually right after that I had to go to the entrance interviews for my eldest daughter’s kindergarten. I figured that at least with short hair I’d look like I had it together more as a dad, heh.

–Lemonade from lemons.  In the end Wrestle Land is a bit of a historical footnote, but would you say there was a lot of good that came from it?

Tanahashi: Very much so. There were definitely fans who hated it, but that was the thing; it was a different brand and it had a different focus.

–The wrestlers were familiar faces, but we saw a different side to them.