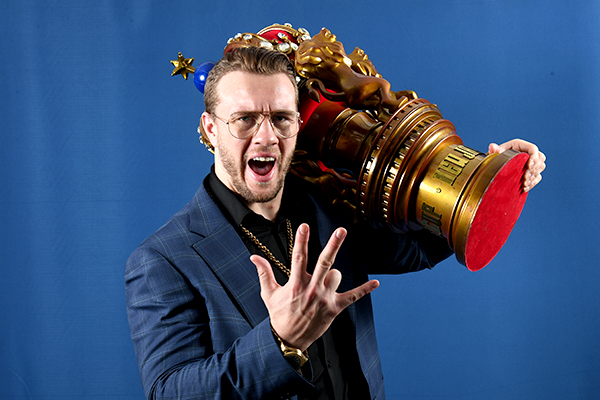 Through a grueling month, Will Ospreay won five back to back hard fought singles matches to lift new Japan Cup 2021, but his task isn’t over. On Sunday, Ospreay battles Kota Ibushi for the IWGP World Heavyweight Championship. We sat down with the challenger to get his thoughts on a monumental bout.

He might have the edge on paper, but I have the mental edge 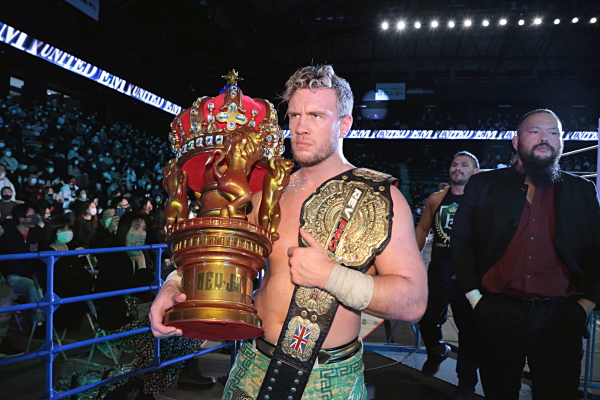 –It’s been a week since you won the New Japan Cup in Sendai. First of all, how are you feeling physically?

Ospreay: As great as you can be with an injured shoulder and broken nose, yeah. I feel dandy.

–That’s one of the issues with the New Japan Cup winner getting a championship opportunity at Sakura Genesis; the Cup winner has to win five back to back singles matches and then have a championship bout against a fresh opponent.

Ospreay: You’re right. I’ve done five singles matches anywhere between 13 and 30 minutes over the tour, plus tag matches. Ibushi’s had three weeks off. I think you could say that he does have a physical advantage going into Ryogoku. But mentally it’s a different matter.

–Do you think you’re more focused than he is?

Ospreay: I do. I haven’t stopped my training; as soon as we finish this phonecall I’m going to do some cardio and then hit the weights. My diet has changed to help that too, to help me get more oxygen into my body. On paper, maybe Ibushi has the edge, but I’m more than confident I’ll have the advantage in Ryogoku.

I’ve come into my stride. I’ve come a long way, you have to agree on that 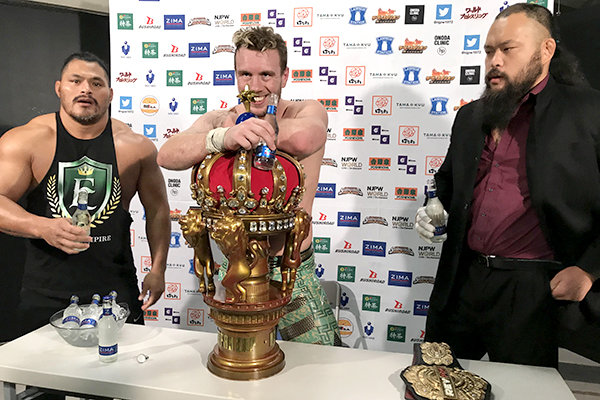 –You spoke in the press conference and your post match comments about only having one loss in Ryogoku Sumo Hall.

–That being at Invasion Attack in 2016, when you lost to KUSHIDA in your NJPW debut. Is it important to you that this match is happening in Ryogoku? 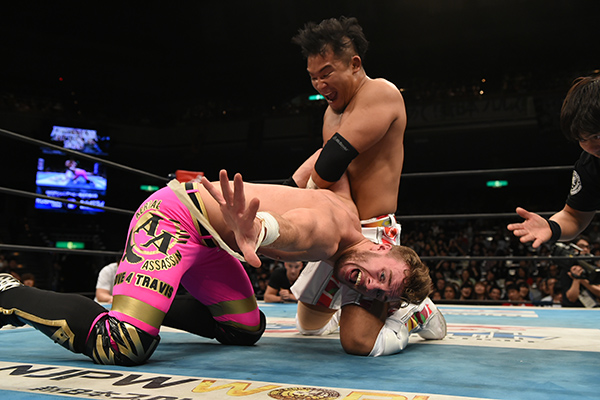 Ospreay: It’s extremely important. I have flashbacks of that first match. Wearing the pink tights. Losing. Letting my country down. I failed, and that’s my biggest fear: failure. I don’t handle failure well, not in myself, and not in other people.

–It was a tough loss.

Ospreay: I remember getting backstage and putting my head against the wall, and just letting out a lot of emotion after that match. I was so down on myself. But since then I’ve come into my stride. I’ve come a long way, you have to agree on that.

–About to be the first challenger to the IWGP World Heavyweight Championship is a long way to come.

Ospreay: I used to be a kid working as an electrician, messing up wiring people’s kitchens. My teachers told me I’d never make a living wrestling. I make more in a tour than they do in a year! Now this is the biggest moment of my whole career. It’s five years coming full circle to me being IWGP World Heavyweight Champion.

–There was a camera crew following you that first weekend five years ago. It was your first time in japan as well, and you were a very different person back then. If you could, what advice would you give to that Will Ospreay now?

Ospreay: ‘You work for you’. I was a yes man then. I wanted to do my best for other people, to appeal to the people around me. Now I do my best for me, me and the United Empire.

It’s poetic it’s with Ibushi, but it could be my dad and I’d still hurt him to get what I want 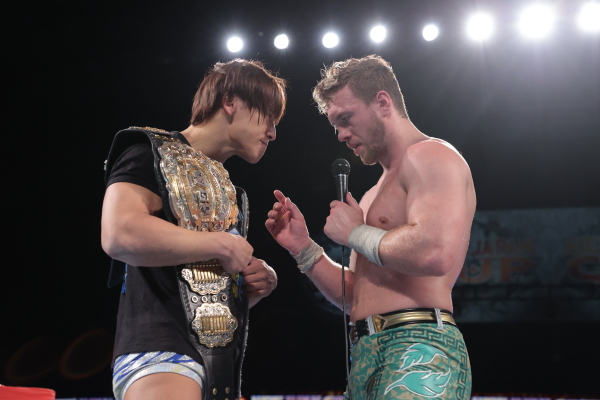 –You’ve also talked about the similar paths that you and Kota Ibushi have shared through your careers. Before you came into NJPW, a lot of people were describing you as a ‘British Kota Ibushi’.

–You were always watching him as a fan even as you started your own career.

Ospreay: But here’s the thing, he had chance after chance, and three G1 finals back to back before he finally took the top prize. He’s only fulfilling his destiny now. Me? This is the first time I’m competing for the top heavyweight title. And I’m taking it. Yes it’s poetic that it’s against Ibushi, but to my mind, it could be against anybody. It could be against my own dad and I’d still hurt them to get what I want.

I’m relishing that monster in me 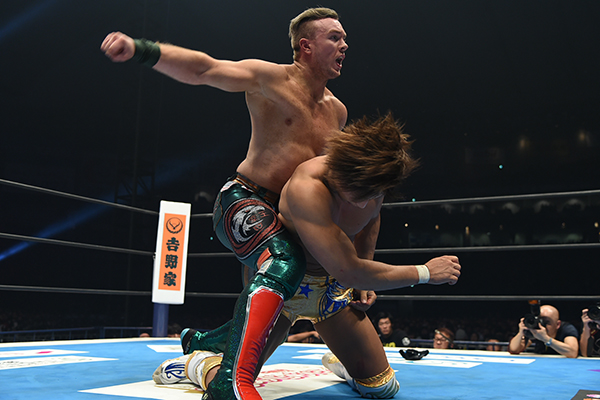 –The first time you wrestled Kota Ibushi was at Wrestle Kingdom 13 for the NEVER Openweight Championship. You used the Hidden Blade for the first time that night, and after the match, Ibushi was out of action for a month. Is it fair to say that this was the first sign we saw of the Ospreay that’s here today?

Ospreay: When I grew up in Essex I didn’t exactly keep the best of company. Me and my friends got in a lot of fights. I’ve been stabbed, everything. When I did what I did to Ibushi I felt almost… dirty? Like that wasn’t me, I thought, that wasn’t the kind of person I should be. But you know what? It was.

–That was always a part of your personality.

Ospreay: You know my grandad, he had a heart of gold, the kindest man you’d ever meet. But he was a hard individual. He’d done some tough things. He was a boxer, not a wrestler. But he told me that you don’t stop at anything to get past what’s in your way.

–He taught you that toughness?

Ospreay: So those doubts might come in, ‘oh, I should do the right thing’. ‘I should shake the guy’s hand, be sportsmanlike’. But this is a full contact sport. We do things that aren’t allowed in boxing, aren’t allowed in the UFC. I can use every part of my body to win a match. I can use an elbow to the back of the head of a downed opponent. So why shouldn’t I? When I was in that position against Ibushi it brought back a lot of memories that I tried to suppress and run away from. But when I did what I did, it lit a fire in me. Now I’m relishing that monster in me. That fighter in my grandad who would do anything to win, whether it was in a bar or in a ring.

Ospreay: Some might take that as an insult, but I don’t. If I can tap into that side of me, then nobody can beat me. 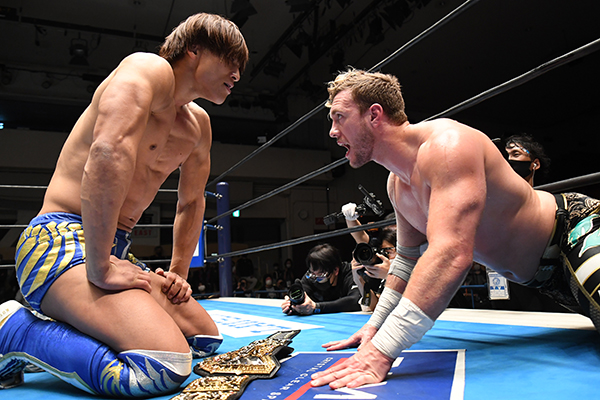 –This is the first time that the IWGP World heavyweight Championship will be defended.

Ospreay: There’s only one top spot now. You could say at one time that the Intercontinental Championship was a workhorse belt, that the matches were more hard fought. Or you might say the top drawing name had the heavyweight title. There would always be that question of who is really best. Now, there’s no doubt. None of this ‘number 1’, ‘number 1A’ bullshit.

Ospreay: The championship doesn’t make the man, the man makes the championship. Now me and Ibushi have to set a standard. We have to deliver, have to give people the incentive to watch and to compete. What I’m going to do is make sure nobody takes their eyes off the championship, be that fans or wrestlers trying to take it away from me. Because I won’t stop at anything to take it from Ibushi.

There are people around, believe me, that will be coming as soon as we can get them here in Japan. 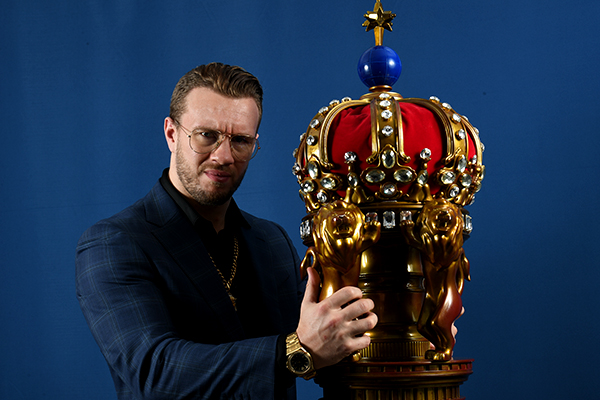 –Another key match at Sakura Genesis will see a new member of the United Empire appearing as a mystery partner opposite LIJ.

–Ever since day one back in October, you’ve been talking about ‘more people coming’. Without giving names away, is this one of those people that have been in mind since day one, or is this somebody new?

Ospreay: It’s someone new. There are people around, believe me, that will be coming as soon as we can get them here in Japan. Some people that you might know already, some people wrestling in other companies right now. But this guy? This is someone that realized it was time to do things his own way and reached out very recently. That’s all I’ll say.

–Any final messages for Ibushi before Sakura Genesis?

Ospreay: ‘Everything will be fine’. At Sakura Genesis, a new era of professional wrestling will be born. It’ll be shaped around my image, around what I want. And it will be glorious.