–We’re continuing our look back at your 2006 today. On July 17 in Hokkaido, you were scheduled to challenge IWGP Heavyweight Champion Brock Lesnar. Two days before the match, contractual disputes evolved to visa issues, and Lesnar was off the card. On short notice, Lesnar was stripped of his title, and a tournament was announced to crown a new champion, but the top name was suddenly absent.

Tanahashi: I’ve been through my fair share of bumps in the road in my career, but this was a huge shock. I remember we were in Kushiro when we found out; I was in the locker room when I heard Choshu bellowing in the room next door ‘what the f***!’ kind of thing. Then a few minutes later one of the young boys comes over and says ‘Tanahashi, Mr. Choshu wants a word with you’. I was thinking ‘oh, boy.’

Tanahashi: I go in there and he says ‘Lesnar’s not coming’. I was just stunned, like the world had gone into darkness in front of me. I never knew the real ins and outs of the contract issue, but I do know he had a really special money situation going on, and I would imagine that was what was at the heart of it. It was really an unprecedented set of circumstances when it comes to IWGP title matches.

–Lesnar shot right to the top in NJPW, with a lot of buzz around him after his first WWE run. He won the IWGP title right away, pinning Kazuyuki Fujita in a three way that also featured Masahiro Chono in October. Then he beat Yuji Nagata and Manabu Nakanishi in non title matches, before defending against Shinsuke Nakamura on January 4, Akebono in Ryogoku in March and Giant Bernard in May in Fukuoka.

Tanahashi: He was a real force of nature, especially at that point in time. You’d see him opposite Bernard, who’s bigger than Lesnar, but there’s no way you’d think that to look at the two of them together, simply because of Lesnar’s forcefulness.

–You challenged Lesnar on June 7, and as a show of your resolve, relinquished the IWGP U-30 belt.

Tanahashi: That title was important for me, but after Nakamura and Bernard were shut down, it had to be me stepping up. So it was a show of doing whatever it took to get that title, fighting with my back against the wall. 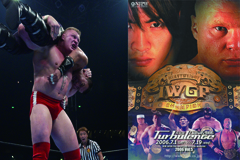 –Had the Lesnar match happened, it would have been your third IWGP challenge.

Tanahashi: Back in those days, we would have this big lion mark flag at the venues for fans to write messages of support on. Going into this match, we ran out of space on the first flag and had to get a second. That was how hyped the match was with the fans in the venues, but all of a sudden it was gone.

–What kind of a match would it have been, do you think?

Tanahashi: Technical, I think. It would have to be; you certainly couldn’t match him for power. To be brutally honest, I could never get into any of what I saw of Lesnar. It was all one sided, a completely selfish way of wrestling. I saw him come up in the early 2000s, and he was just pounding people, you never got to see anything from his opponents. I just didn’t understand his deal at all.

–You both have a very different set of ideals when it comes to wrestling. Shinsuke Nakamura left his match with Lesnar with a bad impression and said he felt like Lesnar was looking down on NJPW.

Tanahashi: Hmm. I think to be honest Lesnar didn’t really care where he was wrestling as long as he got his payoff. That wasn’t the case with Bernard and other foreign guys like that. It really took me aback that there was someone who cared absolutely nothing for the place they were working. That was part of my motivation for that match.

–You were very emotional that night in Kushiro. You stated that you didn’t have the words to apologize to the fans enough, that you wanted to bow down before them. You said that if there was a god of professional wrestling, you needed his help.

Tanahashi: I had to let that all out, at the end of the day there was nothing to do but leave it to God. Actually that night I met an old friend from my student pro-wrestling days; he was working as a teacher in the area. I explained what had happened and he took me to Kusharoko.

–The lake in eastern Hokkaido?

Tanahashi: After the show as well. The two of us at 3 in the morning, swimming in that lake (laughs). But I floated there and looked up at the stars, and it felt like everything washed away. It was incredible, this purifying experience.

Tanahashi: I was able to think of it differently. In the end, life only gives you obstacles so that you can overcome them. I can’t thank that friend enough for that night.

–It’s wild to think of the journey that Lesnar had since. Lesnar vs Tanahashi is one of those dream matches in 2021 that never happened.

Tanahashi: Nakamura could make it happen right? After all Lesnar did, quitting while he was ahead, I’d love Nakamura to get his shot.