KENTA, Ishimori victorious in singles bouts while Yujiro brings the fight to Ishii 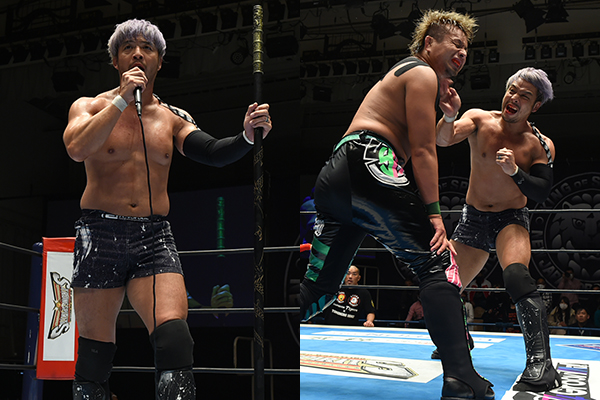 Yujiro and Ishii were first to the ring on the night. After scathing comments from Ishii throughout the tour, Yujiro had a point to prove against Ishii, and came out of his corner with a boot and lariat to his opponent before dropping him over the ropes with a stungun. Once to the floor, Yujiro’s signature cane came to good use, and Takahashi found himself in control, repeated elbows finding their mark, but only getting a one count against the Stone Pitbull.

Takahashi continued to collide with Ishii, but the CHAOS member would get fired up with every collision, until he fired out with a tackle and followed with hard chops in the corner. Resorting to signature dirty tactics, Yujiro twice bit his way out of Ishii’s clutches and followed with an effective bodyslam and sliding lariat, this time getting two. Ishii would again fire back, but Yujiro’s veteran wiles would pay off big, a German suplex into the corner connecting and followed by a Fisherman’s Buster for a nearfall. 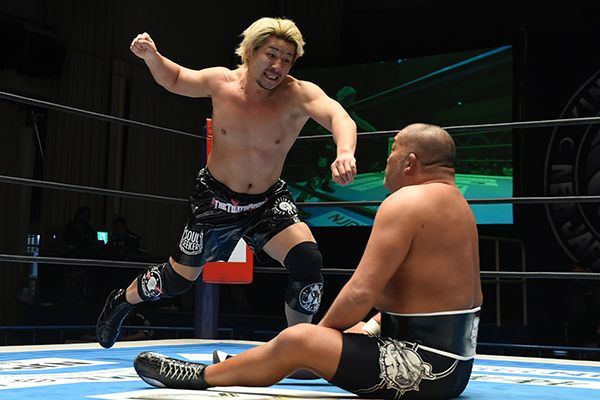 Feeling the pressure, Ishii was able to respond with a vertical suplex and a powerslam, Yujiro finding a way to get right back to his feet before being slowed more significantly by a backdrop suplex. A second rope superplex followed to grant Ishii two. Groggy, Yujiro would spike the Stone Pitbull before getting another two from the Intercollegiate Slam at the ten minute mark. With momentum firmly in his corner, a lariat got another two for the BULLET CLUB representative, who went for Miami Shine, but a gamengiri was awaiting him as the crowd came alive. 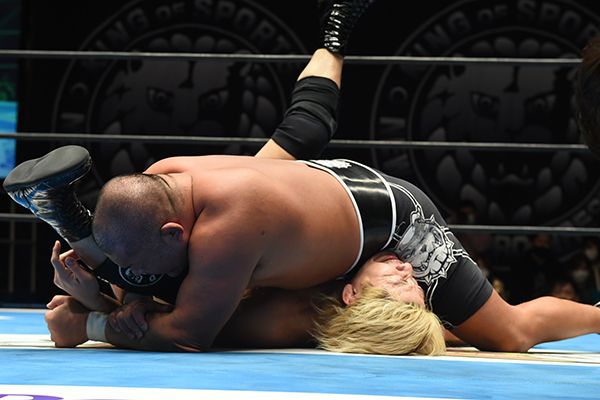 A hard and heavy forearm shiver didn’t slow Yujiro much, but a crunching lariat did, and Ishii followed up with a powerbomb and his own sliding lariat to get two. Yujiro battled out of the Vertical Drop Brainbuster and connected with a DDT that sent shockwaves down the spine of the Stone Pitbull; a reverse Pimp Juice would follow, as would Miami Shine, but Ishii still stayed in the match. The CHAOS member shoved away Pimp Juice and landed a thunderous headbutt to the chest of Yujiro at the 15 minute point; the Vertical Drop followed for the Ishii win.

Hirooki Goto and Taiji Ishimori squared off in the second singles bout of the evening. Goto would use his heavyweight power from jump against Ishimori, pressuring him into the corner. Though Ishimori would accelerate and use every inch of the ring to try and throw his opponent off, a shoulder tackle would be waiting to keep Goto in control, as Ishimori bailed to the floor.

Ishimori was finally able to use his speed to gain an advantage when he sped to a takedown on Goto followed by a modified Dragon Screw on the left arm. Now with a focal point to his offense, Ishimori tied the limb in the ringside guardrail and tried to wait out the referee’s 20 count, Goto finally making it back inside at 19. 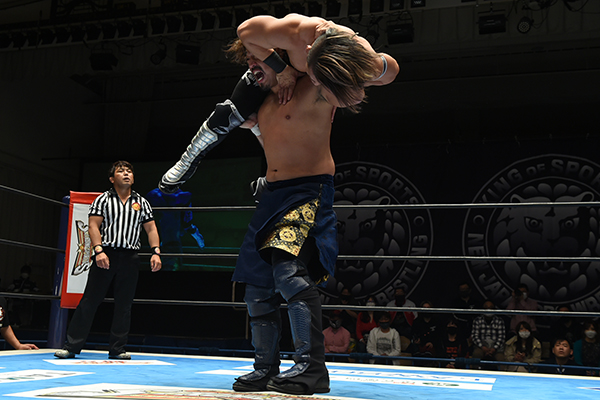 The Bone Soldier retained firm control of the match, stretching at the arm of Goto who couldn’t find a break until a double knee attempt in the corner was sidestepped, Goto finding a big vertical suplex that bought him a little recovery time, but not enough to turn the match. Ishimori connected with a corkescrew leg lariat and hard knuckles to Goto’s skull before a basement dropkick killed his opponent’s momentum on the run, leading to a Yes and then Bone Lock that saw Goto just barely make the bottom rope. 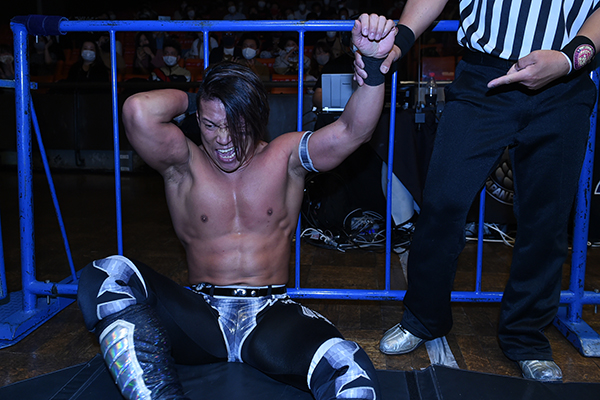 Goto finally got his break with a counter in the corner that led to a hangman’s neckbreaker from the top rope. Ishimori would reply with a knee, but Goto would rock the Bone Solider with a violent lariat, before Ushigoroshi for a nearfall. A GTR was countered however, and a flash backslide saw Ishimori to victory. 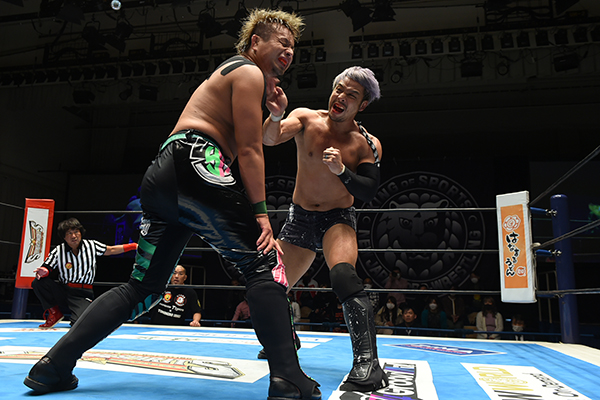 YOSHI-HASHI sought revenge and the return of his ceremonial Bo staff in the main event, but KENTA emerged for the bout sans staff, and with complaints about Tomohiro Ishii retaining a watching brief at ringside. KENTA slowed the pace right down and resisted contact for the opening minutes, but it was the CHAOS member finally making first contact with a baseball slide and a Headhunter neckbreaker to the former NEVER Champion.

KENTA would again bail to the outside, YOSHI-HASHI following and keeping the punishment on his opponent, but KENTA would find a sizable opening with a DDT on the hardwood floor of Korakuen Hall. Now satisfied with the direction the bout was headed, KENTA finally brought YOSHI-HASHI into the ring, and applied painful kicks to his opponent, before removing the corner mat and sending the Headhunter into the steel.

YOSHI-HASHI kept finding a way back to his feet, but was met with axe like mid kicks and open hand blows. At the ten minute mark, KENTA measured the CHAOS member for a killing blow, but YOSHI-HASHI found a Dragon Screw and neckbreaker, before a delayed vertical suplex got a two count from the referee. Again though, KENTA found a way to instantly stall his opponent’s momentum, a kitchen sink driving the air out of his lungs, and a tornado stungun and lariat doing a number on YOSHI-HASHI’s throat. 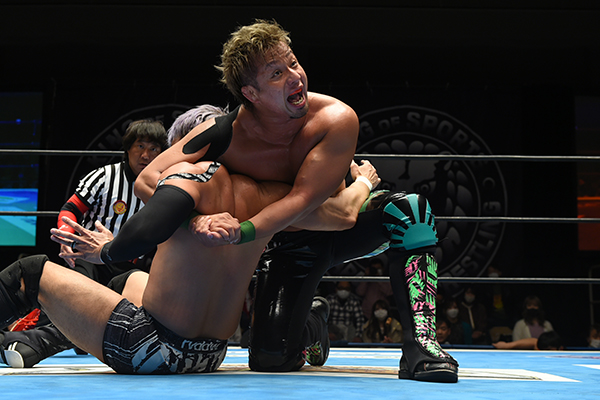 KENTA followed up with an STF, the crowd as well as Goto and Ishii at ringside willing YOSHI-HASHI to the ropes. There he was not safe, as a Green Killer was next to get a nearfall for KENTA, followed by a signature stalling dropkick in the corner. YOSHI-HASHI evaded a double stomp, but not a powerslam that bought KENTA yet another two from the ref, and the double stomp scored on the second attempt as the Headhunter barely rolled a shoulder before three.

Going for the kill, KENTA wanted Go2Sleep, YOSHI-HASHI doing all he could to prevent the lift and throw elbows to the face of his opponent. KENTA’s forearm shivers seemed to hit harder, as did his boots, but YOSHI-HASHI refused to fall to the canvas, reacting with enough speed to land a snap Dragon suplex to KENTA. Desperate times called for a desperation hedbutt for YOSHI-HASHI, which scored, and a slingshot into the exposed steel would follow, before the Headhunter locked in the Butterfly Lock with the match passing the 20 minute mark. As KENTA tried to escape, YOSHI-HASHI rolled him back to the center, where he connected with a backcracker and double knee before Kumagoroshi scored a nearfall center ring. 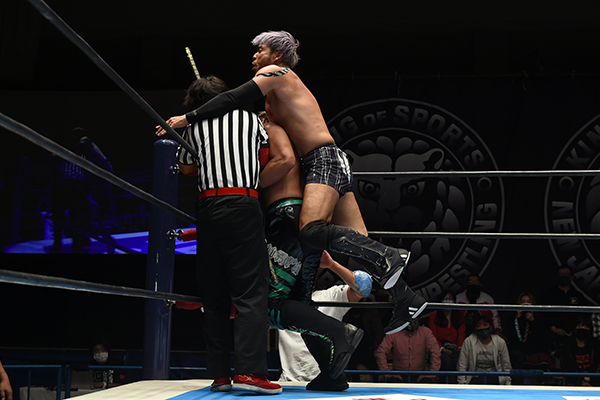 With KENTA appearing all but out, YOSHI-HASHI attempted Karma, but after a narrow escape, found himself on the wrong end of a DDT. On YOSHI-HASHI’s kick out, KENTA would crash into referee Red Shoes Unno, giving him the chance to take his Bo staff from under the ring; an initial attack misfired but a second connected, laying out the CHAOS member. KENTA again wanted Go2Sleep, again denied by YOSHI-HASHI, but another Karma attempt would see KENTA send YOSHI-HASHI into the exposed steel, a series of punishing overhand rights being followed by a Busaiku Knee and the Go2Sleep for the win.

Post match, KENTA stated that he loves being a wrestler, he loves being an entertainer, and he loves ‘Bo-chan’ before telling YOSHI-HASHI that in tomorrow’s title match he’ll leave the CHAOS side with nothing to their names. The NEVER Openweight 6-Man Tag Team Championships are on the line in Tuesday’s main event. 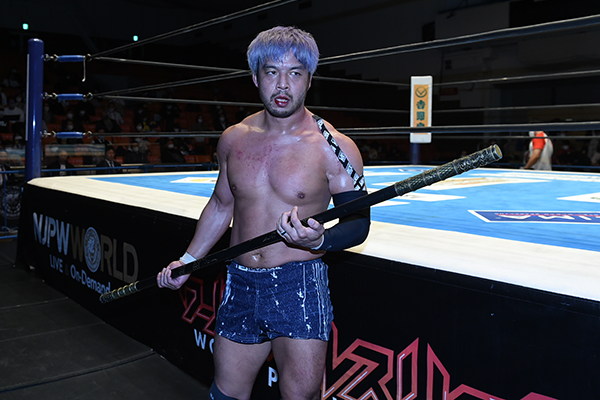