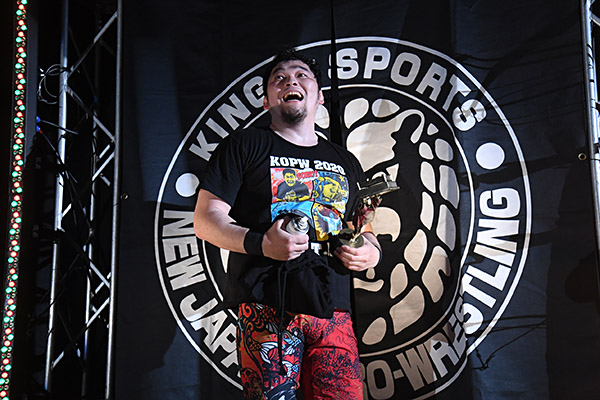 The semi main event of Satsuma no Kuni night one saw the KOPW 2021 trophy on the line in the first ever Creation of Darkness Blindfold Match, Toru Yano doing battle with EVIL. The unique ruleset called for a wrestler first to be blinded by one of the hoods placed on the four cornerposts before they could be pinned, submitted or counted or knocked out. 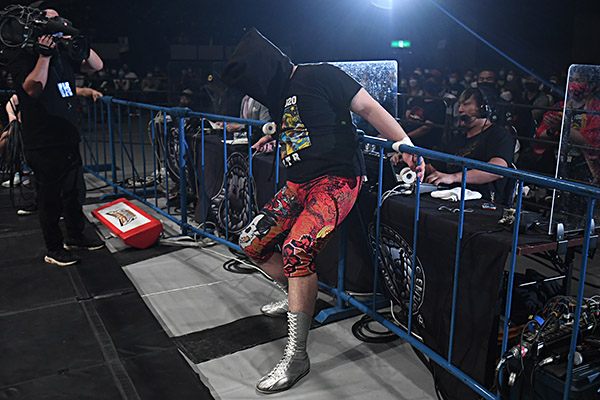 Both men tried to start fast, each taking a hood to hand; Yano distracted EVIL with a cornerpad before rolling him up for two, but EVIL managed to restore vision before blinding Yano long enough for Dick Togo to get a shot in. Outside, EVIL struck the KOPW holder with a chair before taping him to the guardrail with a hood over his head; Yano couldn’t respond to the referee’s 20 count, but did jerk his head enough for the hood to fall off, stopping the count.

EVIL continued to torture both Yano and ring announcer Makoto Abe, sending Ae spilling to the floor, while connecting with Togo for a chain abdominal stretch. Taking Yano outside, EVIL again affixed a hood and threw Yano under the ring while the referee applied his count. 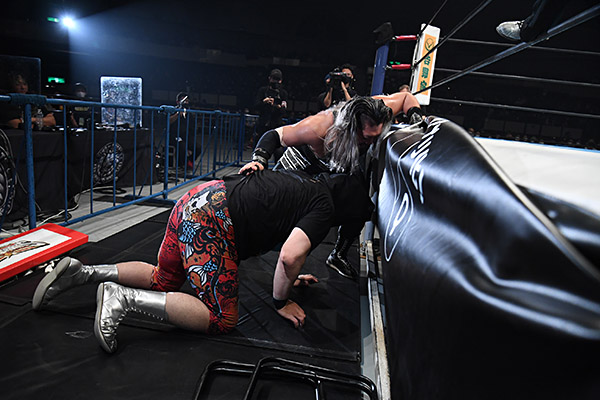 Yano re-entered the ring with new found fire, landing an impressive belly to belly to his challenger. The overzealous Yano would put hoods over both referee Marty Asami and Dick Togo before an exchange of low blows with EVIL left all four men on the mat with blindfolds on. Togo was first to stir, and made his way to the back, before the referee applied a double down count on the combatants, who responded by removing their hoods. Yano slingshot EVIL into an exposed turnbuckle before putting his blindfold on EVIL, only for the arena lights to go down; when they came back up, Yano was hooded and choked out with Togo’s steel wire as EVIL followed with a lariat for two. 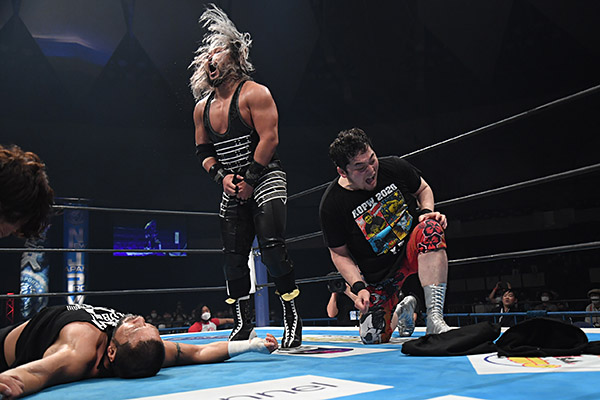 EVIL locked Yano in the Darkness Scorpion only for Yano to escape; as Togo came back inside, the King of Pro-Wrestling was able to blind EVIL, forcing him to accidentally land EVIL on Togo. A low blow followed, and Toru Yano retained his trophy with a roll-up, still undefeated in nine months of KOPW competition.