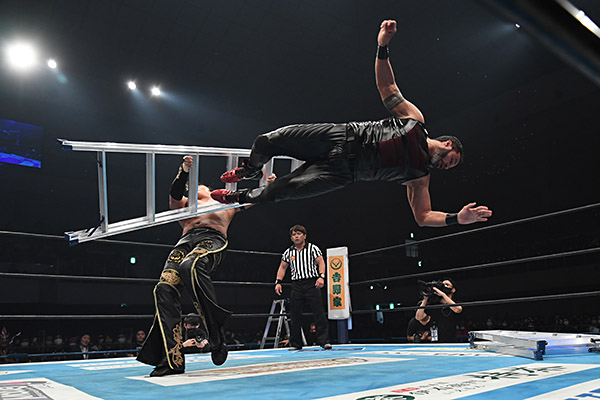 May 3 saw only the second ladder match in NJPW history, as Taichi and Tama Tonga engaged in the dangerous bout for the honour to finally seal away the cursed Iron Fingers From Hell left behind by Takashi Iizuka in 2019.

As the fingers were hoisted toward the ceiling of the Fukuoka International Center, Taichi and Tonga engaged in hard strikes, Taichi coming up with the advantage as he landed an Ax Bomber and took his foe to the mat with a throat hold. As both were separated however, they realised their goal, and both rolled outside to grab a ladder as tension built.

Finally inside, steel clashed as a ladder duel played out, Taichi forcing Tonga to drop his weapon, but finding himself on the wrong end of a dropkick. Tonga found his ladder didn’t have the height to reach the fingers, and opted instead to use the hardware offensively, a hard shot sending Taichi’s back into the ladder and writhing in pain.

A splash in the corner followed, but a second found only steel, and Taichi then threw his opponent into the ladder and out to the floor. Building a bridge between the ring and guardrail, Taichi created a dangerous platform that he tried to suplex Tonga onto; Jado would distract the Holy Emperor however, and Tonga cut him off from behind.

When Tonga looked for his own offense at the ten minute mark, it was DOUKI making the save for his Suzuki-Gun teammate, before Taichi delivered a shot with one ladder, and setting up a king size one in ring. Taichi began his ascent, but was stopped by Tonga; the Holy Emperor choosing to deliver a diving shoulder tackle rather than continue his climb as both men reset.

Tonga found his feet first, and got halfway up the ladder, before DOUKI flew in with a springboard dropkick; he would pay for his loyalty however as Jado delivered a kendo stick shot and then taped Taichi to the ringside guardrails. As his opponent lay helpless, Tonga was free and clear to take the fingers, but Zack Sabre Junior sprinted to the ring to make the save, freeing Taichi as the Fukuoka crowd showed their support. 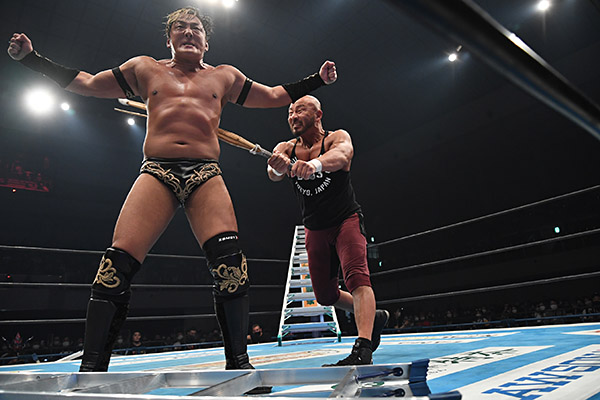 Tanga Loa entered the fray, and he and ZSJ continued their battle from the third match of the night, Loa this time hitting the Apesh*t that lost him the prior bout. Loa followed with a lariat to Taichi, and when DOUKI tried to get involved, he found himself powerbombed through the ladder that bridged the outside of the ring.

G.o.D looked to end the match with Magic Killer to Taichi, but the Suzuki-Gun member fought free with a low shot. Taichi’s trousers went flying in Fukuoka, and an interfering Jado was stopped with a sumo throw. Taichi begun his climb once more; when Tonga tried to stop him, was thrown off with a Nodo Otoshi, but Tonga would land a series of ladder shots to send Taichi crumpling into the ladder frame. 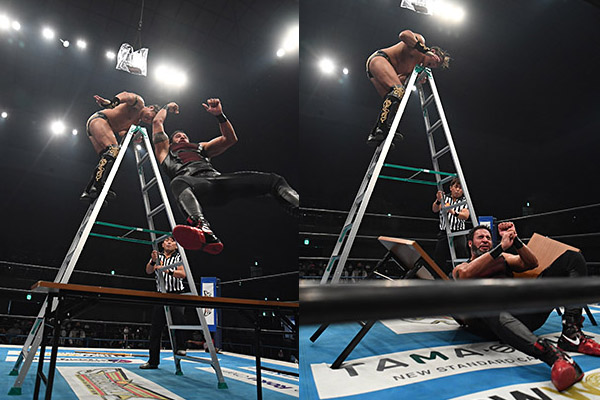 Frantic, Tonga pulled a table out from ringside, and attempted a powerbomb at the 25 minute mark. Taichi fought free and continued to climb until both were perched atop the ladder. Tonga wanted the Gunstun off the ladder, but Taichi hung on, the move backfiring as Tonga crashed through the table; with a yell of ‘Iizuka’ Taichi grabbed the iron and laid the curse to rest. 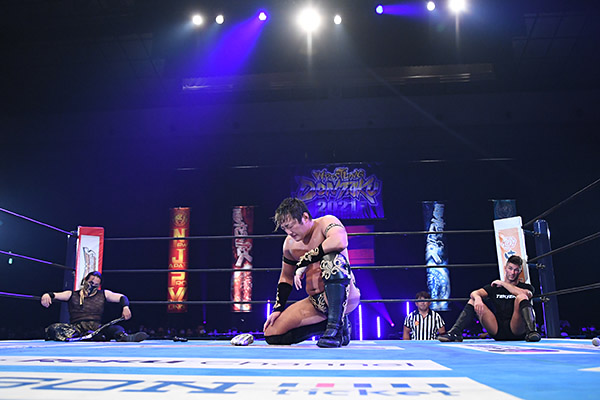 As Taichi took hold of the Iron Fingers, he would take the mic and state ‘with this, it’s done. This is the last time for him, so play his music’. As Takashi Iizuka’s entrance music played, a chapter in New Japan Pro-Wrestling finally ended.