Yuji Nagata reflects on his AEW experience and more 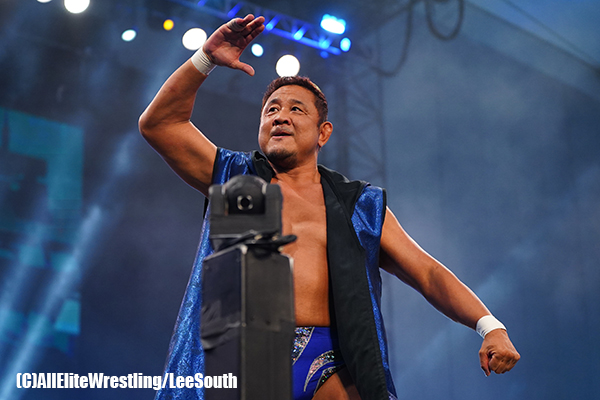 While not ultimately successful in his challenge to Jon Moxley for the IWGP United States Heavyweight Championship, Yuji Nagata was greeted with an impressive reception, and a strong performance on AEW Dynamite. Shortly after he returned to Japan, we talked to Blue Justice himself about his experiences and NJPW’s international future.

Being live on TNT was a huge welcome 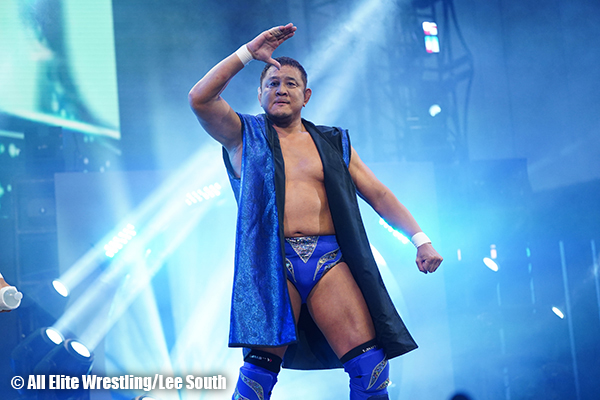 –So, welcome back to Japan!

Nagata: Thank you! I’ve been quarantining though, so since I got to Japan I haven’t stepped out of this hotel room.

–You went straight to the hotel after you got back.

Nagata: Right on a bus from the airport, yeah. Getting out the airport takes about three hours, while you get tested and download apps and all that. Then there’s a lot of rules to follow in the hotel, so you get all that explanation. It’s quite a process.

–Well, let’s reflect on the whole US experience, quarantine and all.

–What did you think when you heard the match with Moxley was going to happen on AEW Dynamite?

Nagata: I honestly had thought the whole time we were going to do it on NJPW STRONG. However much I thought about how NJPW and AEW relate, I didn’t think we would do it on Dynamite at all.

–It all brought you full circle to TNT; when you went on excursion to WCW way back when your matches were on that network, and now they broadcast AEW.

Nagata: It was a nice piece to that story. In a real way that was part of a warm welcome from them, to have that touch of having that match live on TNT. 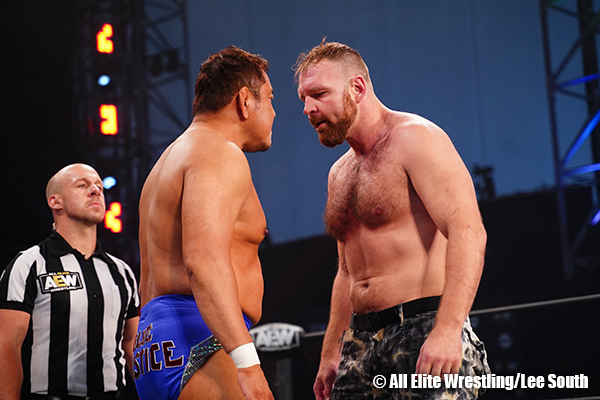 –There was a lot of hype and anticipation for that match, and a big worldwide audience. Having done all you have in your career, do you get nervous before big matches at all?

Nagata: A little bit. In a good way you know, you get some nerves kick in.

Nagata: That’s always there. I’ve always believed in showing that Yuji Nagata has a lot more fire than the average wrestler. That’s the same for every match, but this time in particular, I was back on TNT for the first time in 23 years.

Nagata: It was being broadcast across the US, and there was a big reaction before the match even started, with social media I definitely got that impression. It was just a shame with COVID, the crowd was pretty limited.

–You were in Florida, which has been quite proactive about allowing attendees to events, but it was still a restricted crowd.

Nagata: When you wrestle over there though, it isn’t as much about wrestling to the people in the building as it is wrestling to the cameras and the TV audience. That’s what had me fired up.

–Unlike in Japan at the moment, in the US, fans are allowed to cheer and chant. How was that experience?

Nagata: Oh, that was great for sure. Hearing cheers for the first time in a while like that was special.

–There were Nagata chants, and ‘this is awesome’…

Nagata: Right. It was a little strange for sure. But I had to put that past me, and just put all I had into locking up with Moxley.

You feel the heat, physically when you get fired up. that’s when you know a match is good. 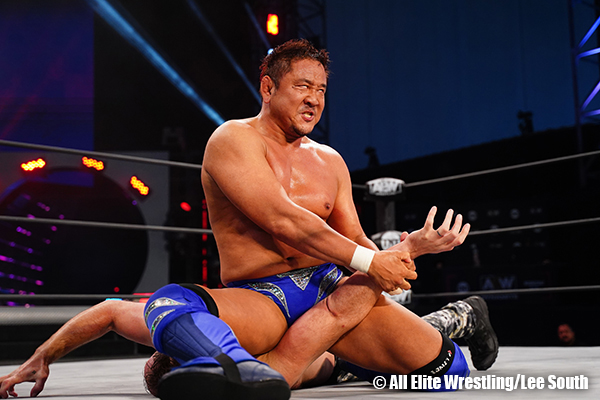 –Your paths hadn’t really crossed in the couple of years since Moxley made his first NJPW appearance.

Nagata: Not at all. He came over in June 2019, but the first time we actually spoke was at the World Tag League finals that year.

–In Hiroshima. Moxley appeared to challenge then IWGP US Champion Lance Archer.

Nagata: I thought I would just say hello to be polite, but we ended up chatting for a while. He said he had been watching my matches for a long time, that he had wanted to meet me for a while.

–He’d been pushing for that match for a while.

Nagata: Right? I wonder why…

–The challenger himself doesn’t know! But he was always very vocal about wanting to experience that NJPW fighting spirit, so to speak.

Nagata: Hmm. I’m a different generation to him, but apparently he saw recent matches of mine and got drawn in. 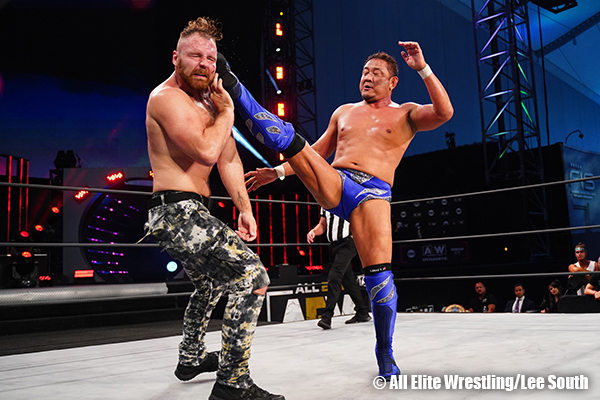 –What was he like to wrestle? Moxley is deceptively big.

Nagata: He is, but he’s slim with it, and very flexible. I definitely sensed that versatility.

–The match might not have ended the way you would have liked, but that Nagata aura definitely came across.

Nagata: What I really wanted to do with that match was show off just who Yuji Nagata is in 2021 to all of the US. We talked about nerves before, but it was more excitement. Then you had (Ren) Narita coming out to corner me as well, it all added up to the kind of situation where I felt that heat, physically. That’s how fired up I was and that’s when you know it’s good.

Narita: I got to see and sample for myself just how tough his lariats and elbows are, and I brought plenty in return. It felt good. One negative I thought afterward looking back though was I maybe relied on my kicks too much.

–You certainly led with those kicks, but we got a lot of classic offense. It was a surprise to hear Excalibur on commentary calling the ‘Shirome’ on your armbar!

Nagata: Ha! I hadn’t actually rolled the eyes back and used that armbar for over a year. It’s really something that needs the fans to be able to yell, to bring that spirit to me. So yeah, it had been a while.

–It just goes to show the level of emotion in that match. How did it feel though, for that match to be over, Moxley having retained?

Nagata: Obviously there was disappointment there, but hearing how the crowd reacted to that match, and the way Moxley acted after the match, that feeling faded fast. I was happy with it, at the end of the day.

I’m not resting my laurels. I’m out to get even more. 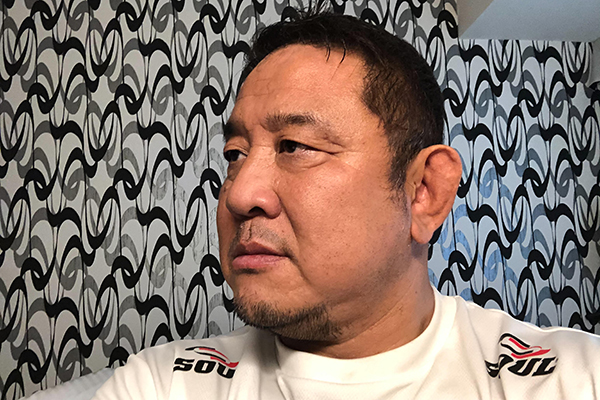 –Incidentally, what are your thoughts on the IWGP US title?

Nagata: I don’t have much of a connection to the belt itself, but to me this was more about my connection to IWGP as a whole, and being back in that mix.

Nagata: Even now there are a lot of people who remember what I did back in the day, and still bring it up. They have a lot of memories and I’m grateful for that. But I’m not about resting on my laurels, I’m out to get more. Doing that would make those past glories even more significant, I think.

–You wrestled on Monday Nitro way back in 1997.

Nagata: ’97 and ’98. Right in the middle of the Monday Night Wars between WCW and WWF. Back then, Nitro had something like a 7% rating share? When you think about having a 7% share across all of the US, that’s pretty incredible. Raw was something like 3-4% at the time.

–The nWo boom was taking over in the US and Japan.

Nagata: There were so many eyes on the product that I was on Nitro two or three times, and still wherever I went people would recognize me. I really wasn’t sure anyone would remember, but as it turned out, a lot of people did, all those years later. There were so many people and other wrestlers backstage who came up to me saying they remembered this match or that, or they were big fans. It was a bit weird, but it was definitely nice to have that VIP treatment.

–It was much like the prime time age of Japanese wrestling in the 80s. The people who watched you as kids in 1997 would be in their 30s now.

Nagata: I had wrestlers come up to me saying they would pick me in the WCW videogame (laughs).

–Karl Anderson was part of that generation. When he was an NJPW regular he would often say that you going to the US would be a big deal.

Nagata: Haha, apparently his brother was a big fan of mine and would pick me in the videogames.

–You shared a lot of nostalgic pictures on your social media. With your old manager Sonny Oono for one.

Nagata: Right! Sonny isn’t in the best of shape with his heart, but he made it all the way from Iowa to Jacksonville. Shinsuke Nakamura came by my hotel as well. 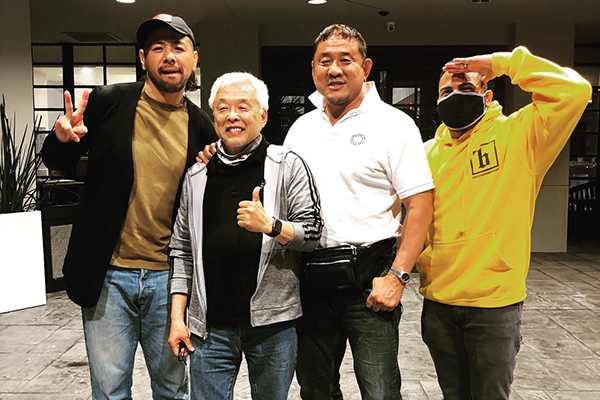 –Does he live nearby?

Nagata: No, it was a three hour drive for him. There are quite a few guys moving from WWE to AEW right now, so there were all sorts of people backstage. I ran into Paul Wight, and Sting as well. Sting took care of me when I was in the US back in the day. You wouldn’t tell he aged a single day, but when I asked him how old he was, he went ‘how old do you think? I’m 63’

–That makes sense when you think about it; he was feuding with the Great Muta back in the day.

Nagata: He’s about four, five years older than Muto, right? Tully Blanchard, Arn Anderson and Dean Malenko were there too; Anderson and Malenko are agents there now. The president, Tony Khan gave a great welcome as well.

–So it was a positive experience all around.

Nagata: It was surreal. Even after the match, there were so many positive comments on Twitter and Instagram. In the end, I was so excited I couldn’t sleep that night after the match, but I had to get on a flight back the next morning, so it worked out pretty well! I beat jet lag that way!