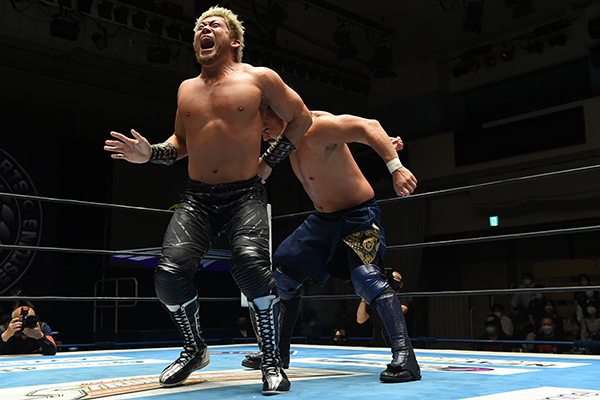 The main event of night four on the Road to Wrestle Grand Slam tour saw SANADA and Tetsuya Naito face off against Hirooki Goto and YOSHI-HASHI in tag team action. Amid speculation from Naito about where motivations for SANADA lay, Cold Skull started the match off against Goto, but quickly found himself struggling in the wake of double team offense, and controlled on the mat by Goto.

With an assist from Naito, the LIJ side went to the floor, Goto and YOSHI-HASHI sent crashing into the ringside barriers as they narrowly skirted BUSHI seconding them from ringside. In ring, Goto was in the wrong corner, and SANADA and Naito exchanged quick tags as they worked over the CHAOS member’s arm. Goto eventually was able to work free with a neckbreaker to Naito however, and brought in a fired up YOSHI-HASHI.

The Headhunter unleashed his pent up energy on El Ingobernable and landed a Bunker Buster and a neckbreaker of his own on Naito. SANADA too would taste YOSHI-HASHI’s offense, with a basement dropkick taking out his knees as a now rejuvenated Goto got back inside to throw heavy elbows. SANADA resorted to a rare rake of the back to get some disrtance, but Goto responded in kind, and a facebuster out of the corner got CHAOS two. 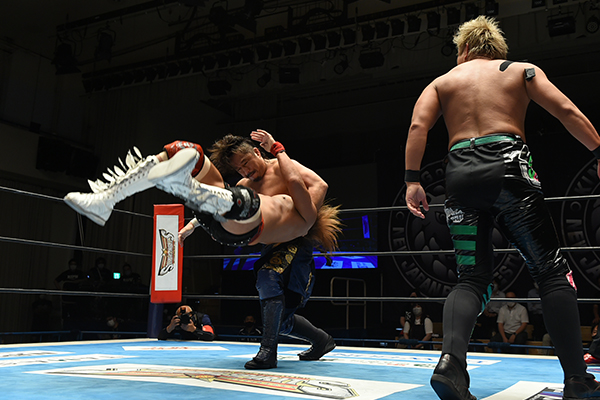 SANADA battled back with a signature leapfrog and dropkick combo before a plancha wiped out Goto on the floor. A springboard dropkick scored in ring. Still perhaps a half step behind Goto however, he was floored with a short range lariat and Goto dropped down to escape a Skull End attempt before a rear naked choke wore down Cold Skull.

SANADA worked free, but only long enough to take a Goto Ushigoroshi as the match passed the 15 minute mark. With tags made both sides, Naito and YOSHI-HASHI traded blows center ring before a Naito Tijeras led to the Combination Cabron. Naito sank in his full leg Nelson and went for more offense in the corner, but the Headhunter found enough strength in his legs to unleash a powerbomb and stay in the fight. 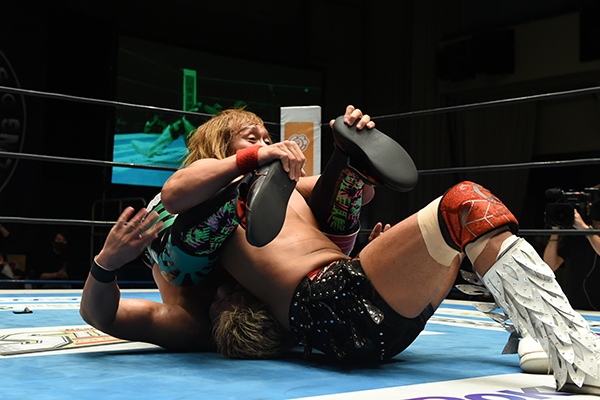 YOSHI-HASHI tried to score big enough to make a tag to Goto, but SANADA was there with a low dropkick to break that tag attempt off, Naito instead scoring with the top rope Frankensteiner he’d been looking for earlier. Naito wanted a running Destino as well, but thsi time it was Goto making the save, and taking care of El Ingobernable and SANADA to set up the Violent Flash double team.

Naito stayed in the hunt, and threw heavy elbows to the neck of YOSHI-HASHI, but was cut off with a pair of lariats. Just as Karma looked to secure a CHAOS victory however, SANADA broke up the attempt, and Naito got a jackknife pin for the barest of victories. 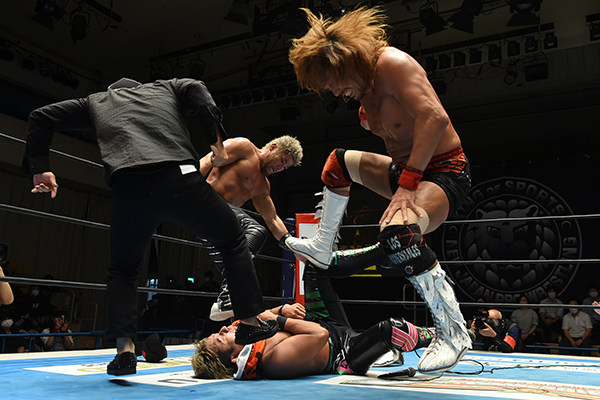 Close win aside, Naito was brimming with confidence as ever as he took the mic. Saying that he had wanted to ‘see where BUSHI and SANADA were at’ this week, Naito surmised that the best way for them to get past any jealousy at Shingo Takagi potentially doing battle for the IWG World Heavyweight Championship would be for the three of them to challenge for the NEVER 6-Man tag titles. With Ishii absent, Naito called on YOSHI-HASHI to accept the challenge, only for the birthday boy to get beaten down when he returned to respond. Goto made the save however, before the Headhunter declared the match was on, warning challengers that relieving the champs of the gold would be no easy task. Where and when will the title match take place? 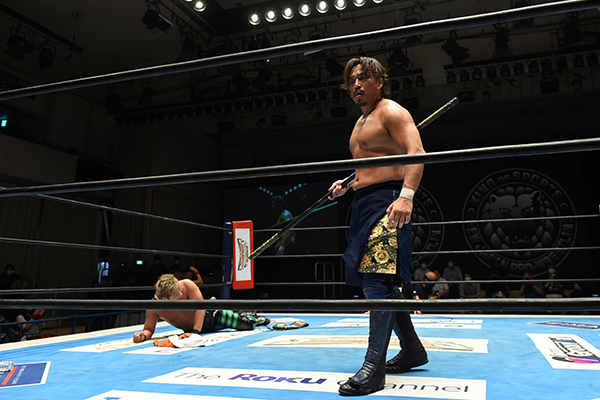