The week that was in NJPW World history [June 5-11]

June in NJPW has traditionally meant the close of Best of the Super juniors, as well as Dominion. It’s the scene of big sea changes in New Japan Pro-Wrestling as the pace is set for the summer, as these selections prove. 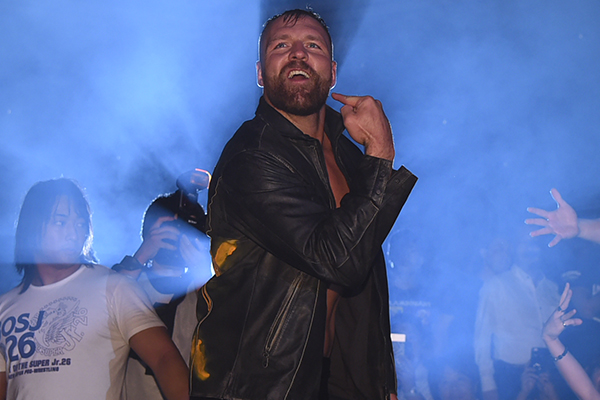 2019’s Best of the Super Juniors would be headlined by an undeniable match of the year candidate between Will Ospreay and Shingo Takagi that saw Ospreay finally hand The Dragon his first ever pinfall defeat in New Japan Pro-Wrestling.

It was a newsworthy night indeed which also included Hiroshi Tanahashi returning to action from injury, only to be defeated by Jay White, and one of NJPW’s most impactful debuts in modern history.

Since Dontaku in May, mysterious videos had atunted IWGP United States Champion Juice Robinson, leading to rampant speculation on the identity of a mysterious ‘Death Rider’ from Juice’s past. Shortly before the Best of the Super Jr. finals, the man behind the videos was revealed as Jon Moxley.

Moxley and Robinson had trained together long ago in WWE’s developmental system. While Moxley would make it to the top flight in WWE, Robinson elected to gamble on himself and start from scratch in New Japan, becoming one of NJPW’s most beloved stars in the process. In 2019, Moxley finally elected to make the same gamble and leave his American employer, pursuing a long held career goal of wrestling in Japan.

Champion Robinson was furious at the incumbent Moxley getting all the press, and vowed to prove to the Death Rider that he was not the same 22 year old kid Mox had mentored in Florida years before. Robinson promised a fight, and the match more than delivered. 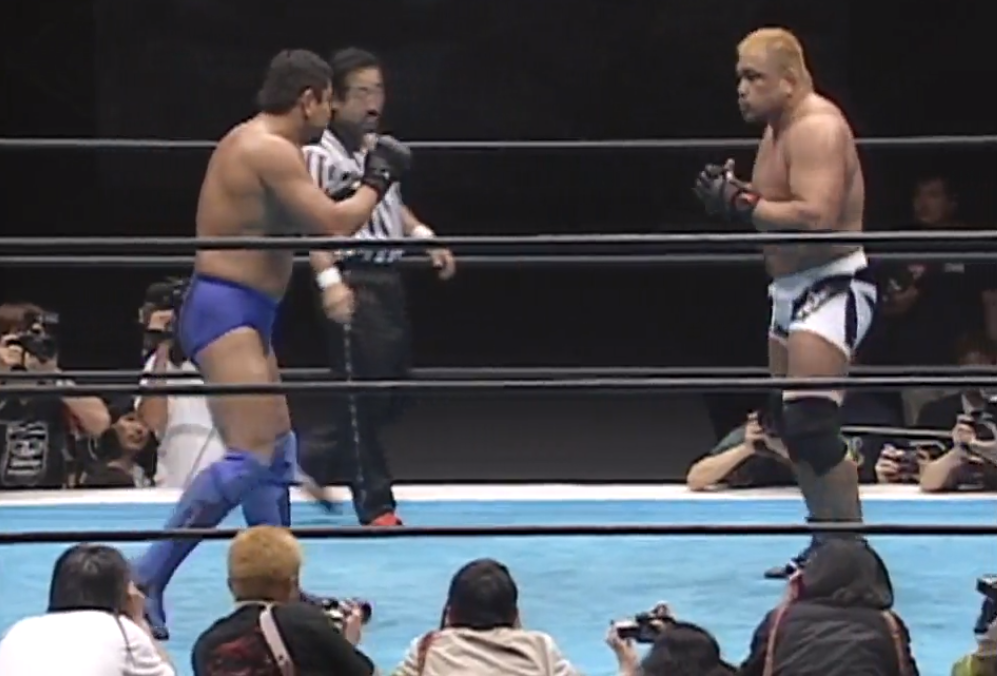 In 2001, the Nippon Budokan played host to an event known as Super Force Group. As the name might suggest, it was an event centered on pitched battles of promotions and philosophies. A series of NJPW versus AJPW matches took place on the undercard, highlighted by Satoshi Kojima battling Toshiaki Kawada. In the main event, a different kind of clash, with two very different styles: Yuji Nagata challenging IWGP Heavyweight Champion Kazuyuki Fujita.

Nagata had beaten close friend and contemporary Manabu Nakanishi in April to earn his first IWGP Heavyweight Championship opportunity. His rise to the main event was embraced by NJPW loyalist fans who had followed his decade long career, while his champion opponent had somewhat more mixed reactions.

Fujita entered the NJPW Dojo in 1996, but pro wrestling wasn’t his sole focus. Participating in RINGS and PRIDE, Fujita had a burgeoning MMA career, with wins over Hans Nijman and Mark Kerr. Fujita would be a favourite of Antonio Inoki, who saw him as a promising competitor in both sports.

Fujita would defeat Scott Norton for the IWGP Heavyweight Championship, but his kickboxing style was not what many purists saw as true to NJPW legacy and tradition. It meant for a passionate crowd that were eager to see Nagata claim IWGP gold. 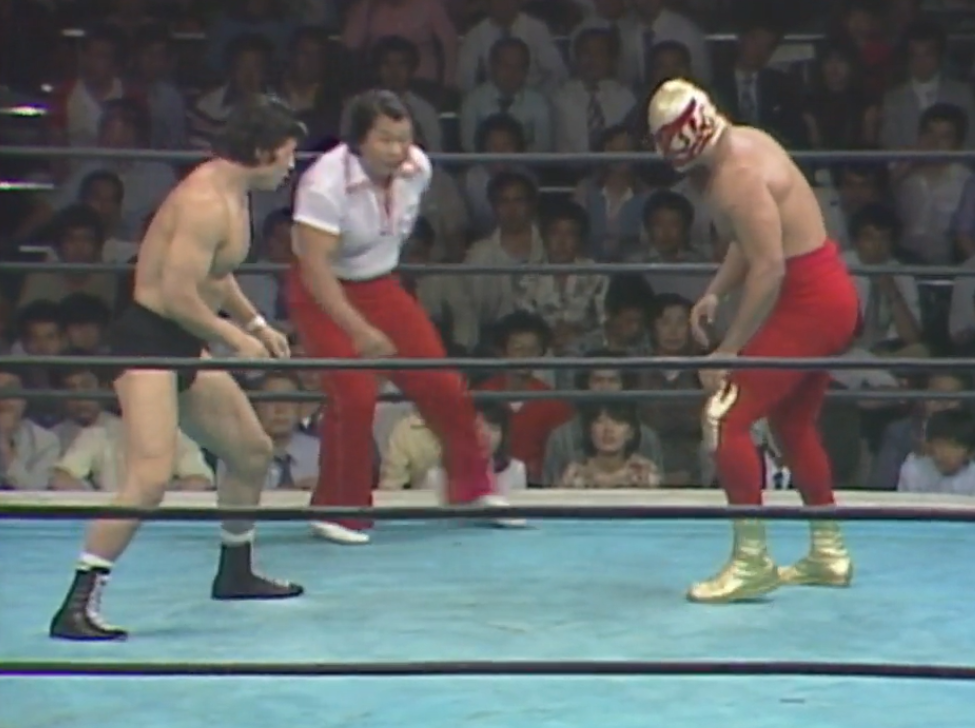 While Tatsumi Fujinami had a long and storied career as a heavyweight wrestler, it was a junior heavyweight that he first shot to prominence and popularity. Winning the WWF Junior Heavyweight Championship in Madison Square Garden in 1978 (a match, in fact, where the Dragon Suplex was invented), Fujinami took the title home and defended it against all comers, to rabid audiences.

Canek was possibly his toughest challenge yet. The Mexican favourite could lay claim to being, along with Mil Mascaras, one of only two Mexican men to pin Lou Thesz, and his win saw him shoot to the position of Ace in his home UWA promotion. Earlier in the year, Canek had wrestled Antonio Inoki himself in Mexico, and here in Japan was granted an exhibition with the junior heavyweight champ in Osaka.

The five minute exhibition match went by too fast; so fast that fans demanded more, and were given more immediately after. Fujinami and Canek would wrestle another 20 before a double count out; Fujinami would demand that they meet once more in Tokyo, this time with the WWF Junior Heavyweight title on the line.

That brought us to June 7 and Kuramae. Even before the match, others were lining up to try and face Fujinami later on; Ashura Hara was a guest from rival promotion IWE and showed up to shake the champion’s hand and put himself in Fujinami’s headspace. For now though, he had bigger fish to fry. 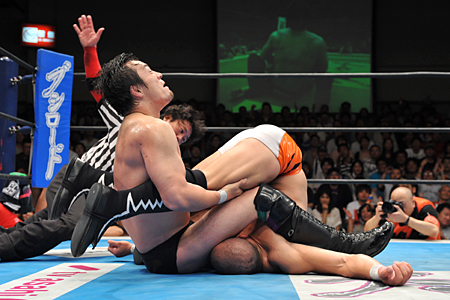 2008 began a strange pattern for Best of the Super Juniors that ran for half a decade. Be it through momentum, circumstance or divine justice, the runner up one year would go on to win the next. In 2008 Koji kanemoto submitted to Wataru Inoue, but the next year defeated Prince Devitt in the final to win BoSJ. Devitt then would win in 2010, by defeating Kota Ibushi, who took the trophy in 2011 by beating Devitt’s Apollo 55 partner Ryusuke Taguchi. In 2013, Devitt would break the chain with his perfect tournament performance and a win over Alex Shelley in the finals, but in 2012, fate was dead set on making sure the Funky Weapon Taguchi had his time.

Taguchi’s 5-3 record in the block phases of the tournament was a long way behind Low Ki’s 8-0 perfect record to win the block, but just enough to squeeze through a three way tie for second to put him into the final four, this back in the days when the top two from each block entered a knockout phase. Taguchi would beat A Block winner PAC to make the final, while Ki would defeat Devitt in his semi finals setting up an all B block final, and with the Dodon To The Throne, Taguchi sat atop of the junior heavyweight mountain.

Kazuchika Okada has had a complicated history with Dominion. After being eliminated from proceedings in 2020 by EVIL in the New Japan Cup final, last week’s event saw him return to the main event in Osaka-Jo Hall; a spot he has held more than any other wrestler. Even so, it was in defeat to Shingo Takagi.

This followed a post match beat down from Chris Jericho in 2019, while in 2018 he would lose the IWGP Heavyweight Championship he had held for nearly two years straight, and in 2017, even though he left with the title, he wasn’t a winner, and nor did he feel like one.

Kenny Omega had already taken Okada to the limit once in 2017; their Wrestle Kingdom encounter saw the Rainmaker emerge on top, but only after a 43 minute war that was the longest Tokyo Dome main event to date. Omega wanted one more shot at toppling the champion, and this time, both would push the boundaries of human endurance.

The result was a 60 minute time limit draw; the first in an IWGP title match for over a decade. This despite a furious pace that belied the match time. By the end of the bout both were so exhausted that when Okada did have his challenger primed for a Rainmaker, Omega’s legs gave out, and he crumpled to the floor in a moment of luck that resulted in the match going the distance. While Omega didn’t win the bout, he came out of Osaka Jo Hall knowing he had the measure of the champion, and in the main event a year later, he was able to prove that point.