Great-O-Khan’s first fan interview saw some incredible insights and some surprising statements. As intimidating as the United Empire’s Dominator is, O-Khan does have time to spare for his most loyal subjects, 20 more of which offered questions for the second part of our conversation.

Is there a wrestler you pattern yourself after?

O-Khan: Of course not! Any wrestler outside of NJPW or the present moment of time isn’t worthy of our attention. And the idea of respecting those weaker than us is laughable.

O-Khan: He said something about wanting to wrestle at old people’s homes. We… agree with the sentiment. Pro-wrestling is something one can do anywhere with a ring, is it not?

O-Khan: For more to respect and recognise our power, we must not just wait for people to come to see us, but to bring the experience to them. We believe professional wrestling should be part of the media mainstream, like anime is. If that means wrestling in a place other than a traditional arena, we would do so.

–So you’re in alignment with Ibushi.

O-Khan: In that respect, we are.  And Ibushi wrestled dolls, wrestled in the streets, did all sorts of mentally unsound things. But it was in precisely those kind of public executions in England that we first tapped into what professional wrestling can be. We have time for the wild characters, and we appreciate the man in Ibushi that will choose to fight anywhere at any time. He would be more than welcome to join our union. Perhaps he is the one I would most enjoy seeing subjugated, heheh. 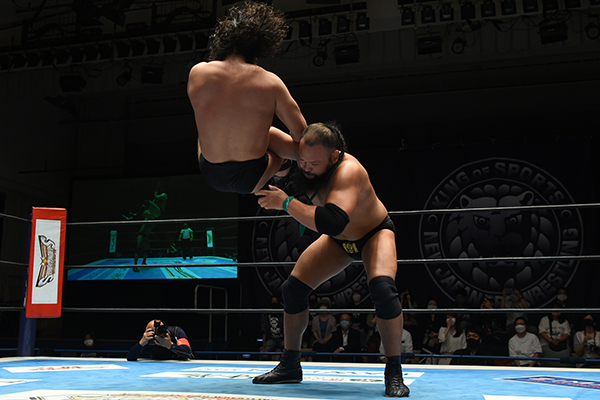 How did you come up with your Eliminator finish?

O-Khan: First, we thought to use a facebuster, something that targets the face of our opponent.

O-Khan: One can train muscles, train joints, train the body. But the face cannot be trained. The eyes, the nose, the jaw are always weak points. And when anyone falls on their face, they also fall on the stomach, the solar plexus, the knees. It kills several birds with one stone. But wrestlers also like to prove their strength. Crushing apples, tearing phone books. We wanted to show how easily we can crush our foes, and how much weight we can lift. So the Iron Claw, with a violent slam, that was the genesis of the Eliminator.

Are you working on more finishing moves other than the Eliminator?

O-Khan: We have new moves, but we also have moves we used in the UK and in MMA you haven’t seen yet. But we fight not just with moves, but with a desire to crush our opponents. That backbreaker with the Iron Claw, like you saw against Tanahashi in February, that kind of thing could come at any time. 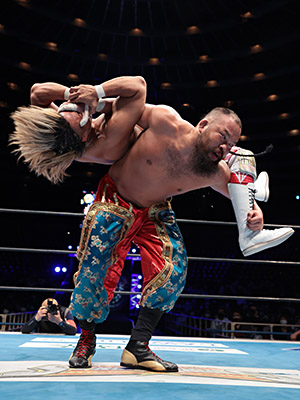 Is that move you used on Tanahashi in Osaka Jo Hall something you’re keeping for special matches?

O-Khan: We work in mysterious ways. It could be anywhere, in big stadiums or city halls. You’ll have to wait and see!

Does that move have a name?

O-Khan: No. But if it did, we would choose a name that has nothing to do with professional wrestling. Perhaps we could have an official poll of our loyal subjects for name ideas. 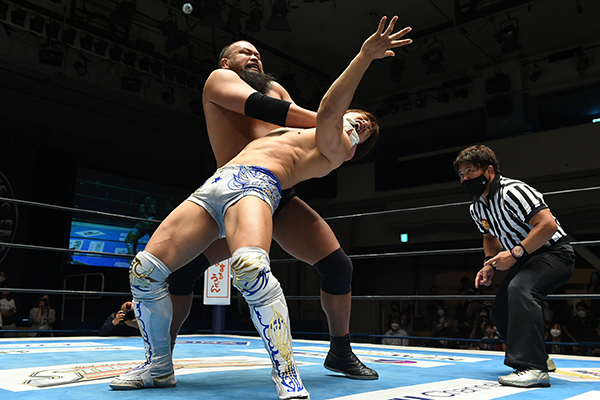 Please explain how the Ozora Subaru-style Sheep Killer came about.

O-Khan: A fine question! This may get in depth. We enjoy anime and V-Tubers, but we didn’t want to bring that into pro-wrestling.

O-Khan: Exactly. We didn’t name other moves after anime titles or characters, but Ozora Subaru is a different matter. It’s… special.

O-Khan: The name comes from ‘Hololive’.  This character, the princess Ozora Subaru used a move to kill a sheep in order to make a winter cloak.

–What kind of move was it?

O-Khan: It’s easier to see the video, but it was a move that impressed even a MMA expert such as us. Something we have not seen or heard of in professional wrestling but that we knew would go down in history if it were used. At first it was difficult to adapt to our matches, but when combined with our strategy to target the face it became something of our own.

O-Khan: There is no escape from it. It targets the lower back, the neck and the face, meaning it cam come after a backbreaker, Iron Claw, or TTD. Ozora Subaru invented it to kill a sheep, and thus the name came to be.

Are you considering any other moves inspired by V-Tubers? 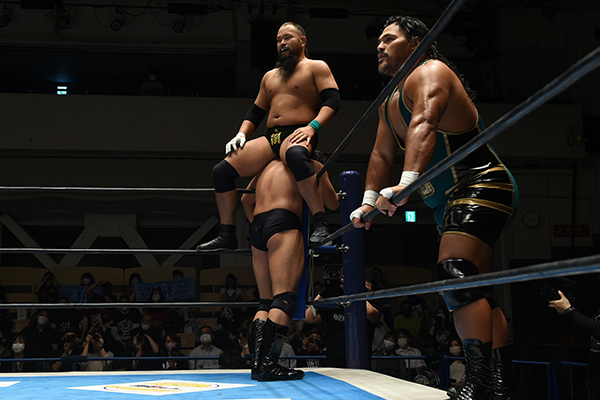 Of all the wrestlers you’ve sat on in the corner so far, who has been the most comfortable?

O-Khan: Hehehe. We said Naito on Twitter, but we think the most pleasurable are the truly proud ones, the ones who think they are really the best ever. Okada, Tanahashi. We want to take our throne on Minoru Suzuki, or Tomohiro Ishii, or KENTA. They would make fine seats.

Of all the martial arts you have tried, which one have you found the most rewarding?

O-Khan: grappling has a big influence on professional wrestling, but we enjoyed MMA the most.

–Your martial art influences really come through in your matches, perhaps more than any other wrestler.

O-Khan: Which is what makes us so powerful. We view professional wrestling as just one of several disciplines. We do not go around saying this is the strongest, the best martial art. It isn’t about what discipline is strongest, it’s about who is strongest.

O-Khan: So, we set out to conquer Japan and the world in karate, wrestling, sambo, grappling, pancration, Brazilian Jiu Jitsu in kickboxing. Whatever we did, we dominated until there was no opposition left. And then we set our sights on professional wrestling.

If you were to challenge for the KOPW trophy, what rules would you choose?

O-Khan: We do have some interest in KOPW. But if we were to participate it would be under completely different rules. Fighting outside, where entering the ring means a loss. No ropes. Ten count pinfalls, or one count pinfalls. Submissions only, or throws and suplexes only.

–So you’re interested in wrestling under those kinds of different rules.

O-Khan: It is one domain we seek to conquer.

What training and diet have you adopted to get your physique?

O-Khan: This is one more place where we differ from any other wrestler. We do not take any supplements at all. No protein supplements, nothing. An entirely natural diet.

–So you take care over what you cook?

O-Khan: How dare you assume we sully our hands with preparing food! We have a personal chef!

O-Khan: We’ll allow it this once. As for training, we run, stretch, spar and lift weights.

Is there any specific music you listen to while you train?

O-Khan: We listen to a lot, but lately we are motivated by ‘Kishi Koshinkyoku’ (Angela) ‘Inochi ha Kiwateiru’ (Hatsune Miku) and ‘Hokori Takaki Idol’ (Honeyworks feat. Konoha). A strong lyric can move even our hard, powerful heart.

How does the mighty dominator spend his time off?

O-Khan: In our residential palace watching anime and V-Tubers.

What is your all-time favourite anime?

O-Khan: How could anybody choose the best of all time! A foolish pursuit! The first name that comes to mind is ‘The Testament of Sister New Devil’.

Of all the anime that premiered this season, which do you like best? If it’s hard to pick one, give a top three.

O-Khan: Only three? Preposterous. We enjoy all anime.

–If you had to though…

O-Khan: Well. If we had to choose three that keep you waiting for the next episode, then ‘Higehiro’, ‘Tokyo Revengers’ and ‘Zombieland Saga Revenge’. But we are as dedicated to anime as to any other part of our life! When we aren’t training or fighting, we are watching anime, so don’t get it twisted and think this is all we’re watching!

What anime has had the most profound effect on your life?

O-Khan: We were completely obsessed with an anime called ‘School Rumble’. We saw this TV show with young heroines fighting, cute girls and humour and it amazed us.

If you had to recommend three anime that everyone should watch, what would they be?

O-Khan: We should dismiss this question out of hand and say all these works should be watched. But since we are benevolent, we, as professional wrestling’s pre-eminent anime otaku, have chosen three anime for wrestling fans and three for core anime fans.

–Please, if you would!

O-Khan: For those who haven’t watched anime: ‘GranBlue’, ‘Ixion Saga DT’ and ‘Girls und Panzer’. Make sure you watch them in the proper order!

O-Khan: The stories are simple and there’s enough to draw non fans in. And there are expressions and story telling techniques in here that you don’t get in live action TV, so it’s a good starting place to introduce people to anime.

–And the core choices?

O-Khan: ‘Maquia: When the Promised Flower Blooms’, ‘Shuffle!’ and ‘OreImo’. Masterpieces. They make even our eyes… sweat with emotion.

Who is your favourite character in (BushiRoad anime/game project) D4DJ?

O-Khan: Rinku Aimoto and Maho Akashi. They’re both in the main group of D4DJ. Rinku has a very bright disposition, is kind and humourous. Maho is a tomboy but is an excellent cook and takes the ‘big sister’ role. And she has a dynamite body.

Who from (V-Tuber ‘talent agency’) Hololive are you a fan of?

O-Khan: Himemori Luna, Natsuiro Matsuri, Takarekane Marin, Ozora Subaru… A difficult question. We enjoy watching all the Hololive V-Tubers. We have much to opine about on the subject! Next time, we shall talk entirely about V-Tubers.

O-Khan: Then we will tell you about how V-Tubers helped us through our advance into the UK, and why those names are so important to us. Make sure there is enough time set aside!

–For now though, how was the fan interview experience?

O-Khan: Quite agreeable. We rarely have a chance to talk on subjects like these, so we are happy to take questions from our most loyal of subjects. Not just about professional wrestling, but anime, V-Tubers and anything else! We will talk for as long as it takes. One more thing. Life is about indulging mutiple tastes. The more things you enjoy, the more things colour you. A salute to open minds! And a salute to the United Empire! 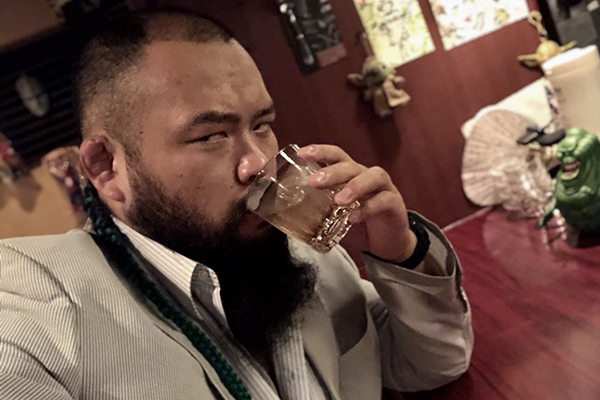