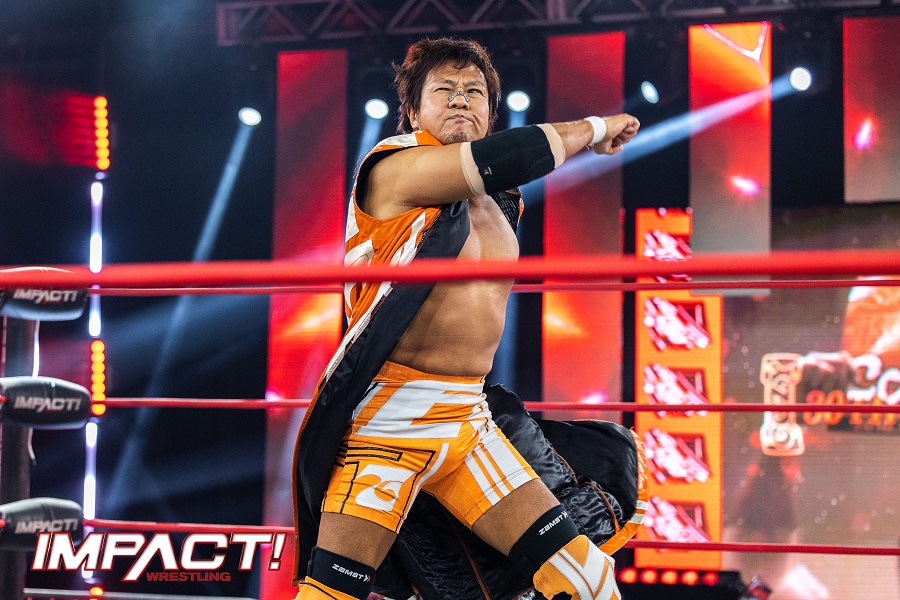 June 24’s edition of IMPACT saw Satoshi Kojima and Eddie Edwards wrestle for the IMPACT Tag Team Championships in the main event, the duo battling Cody Deaner and Joe Doering, who represented the Violent By Design faction under the ‘Freebird Rule’ in effect for the titles.

Edwards started the bout with Doering, who bowled the NOAH alum over before tagging in Deaner, who had a harder time against Kojima. After a tackle by the legend, the challengers kept the pressure up on Deaner, until a shot from Doering to Kojima turned the tide. Doering dropped a heavy elbow to Kojima and after Deaner peppered the legend with strikes, Doering kept him down with a sleeper hold. 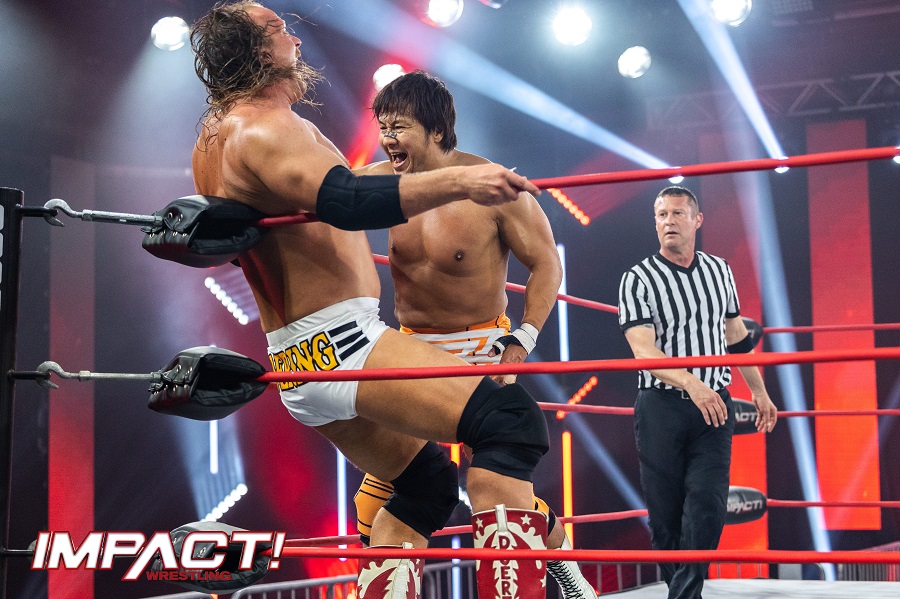 Kojima would finally manage to shift his momentum on a Doering suplex attempt however, and landed a suplex of his own to bring Edwards back inside. A Blue Thunder Bomb scored to Deaner to get a two count, and though Doering quickly stepped in to stop the challengers’ momentum, a low bridge and a clothesline from Kojima put both champions on the floor where they tasted stereo dives.

Edwards maintained control after the aerial assault until VBD’s Rhino created a distraction to allow the champions to take over again. Now Edwards was in the wrong corner as Deaner kept piling on the pressure and Doering landed a big, heavy boot. With a blocked suplex and a side suplex of his own though, Edwards brought Kojima back in. 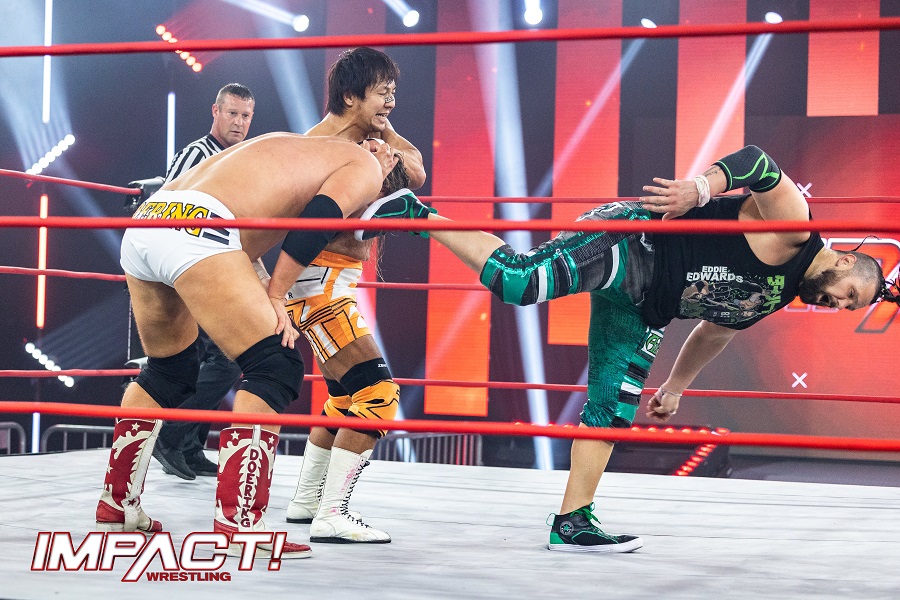 Kojima levelled his opponents and unleashed a clip of machine gun chops on Deaner, before he and Edwards unleashed the moves in stereo on both champions. A top rope Frankensteiner from Edwards was followed by a Kojima elbow drop for two; though Deaner battled back with a neckbreaker, a follow up diving headbutt only found the canvas.

Edwards would take advantage an attempt a Backpack Stunner, but would be met by a crunching Doering crossbody instead. That created the opportunity for Deaner to hit his headbutt on the second go-around, but Edwards kicked out at two and a half, and when Doering looked to finish Edwards off, Kojima rejoined the fray. 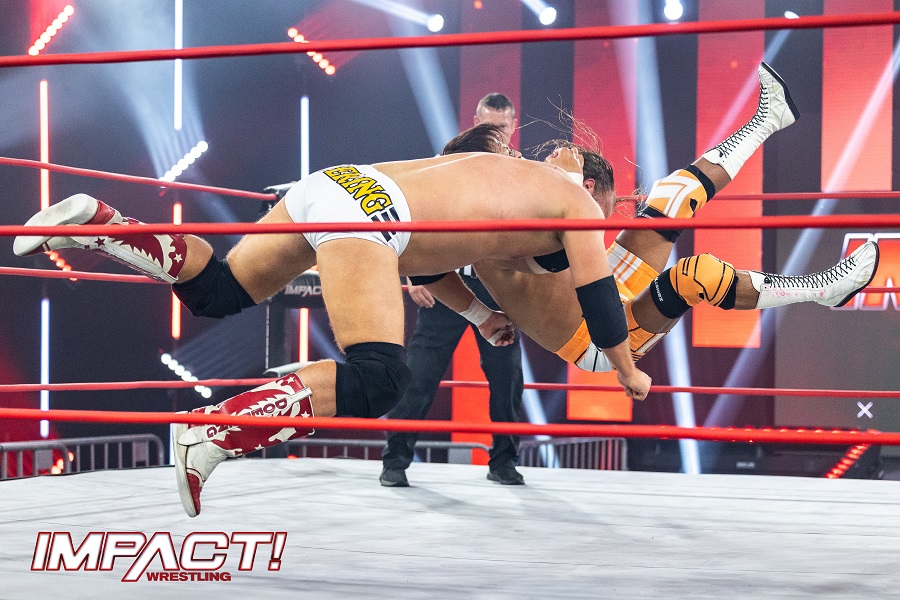 Though Doering powered through Kojima and Edwards with a double lariat, Edwards would use a headscissors to get out of the champion’s Revolution Bomb attempt. Kojima hit the Koji Cutter to set up Edward’s Boston Knee Party finisher, but Doering recovered to catch his opponent, and connect with the Revolution Bomb for three. 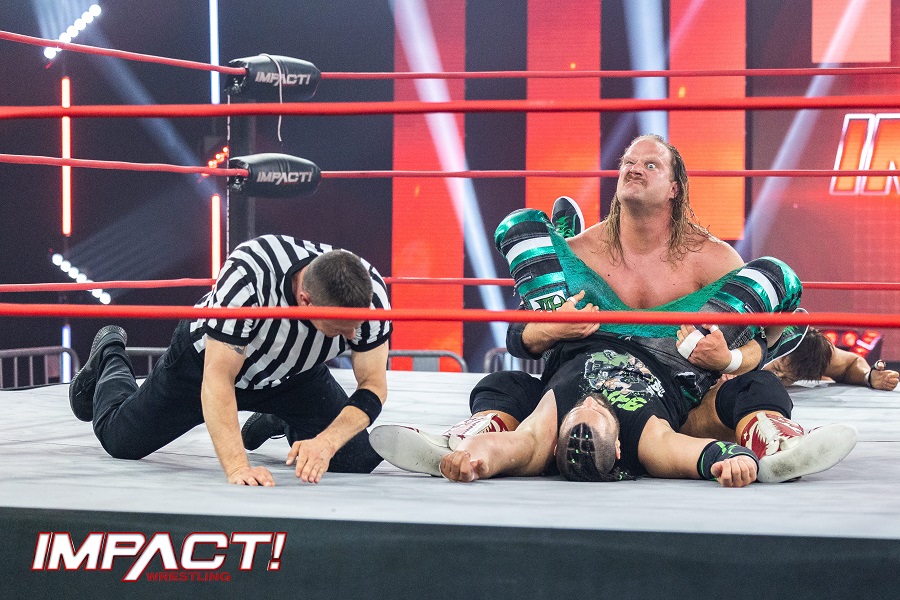