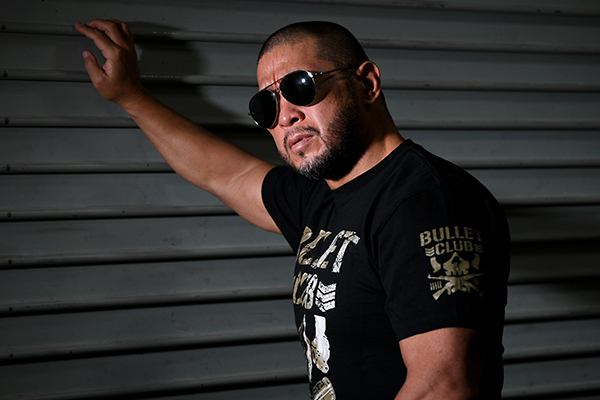 Amid a chaotic weekend at Osaka Jo Hall in 2020, EVIL shocked the world not once but twice as he defected from Los Ingobernables De Japon to BULLET CLUB, and then seized the IWGP Intercontinental and Heavyweight Championships. Assisting in his victory was EVIL’s new ‘pareja’, Dick Togo. Yet while Togo was unfamiliar to newcomers to NJPW, he is a veteran with three decades of experience, and a highly influential figure in junior heavyweight wrestling. This is the first interview Togo has consented to since joining BULLET CLUB; what does the Spoiler have on his mind?

I’ve been able to do this for 30 years because I’m a chameleon. 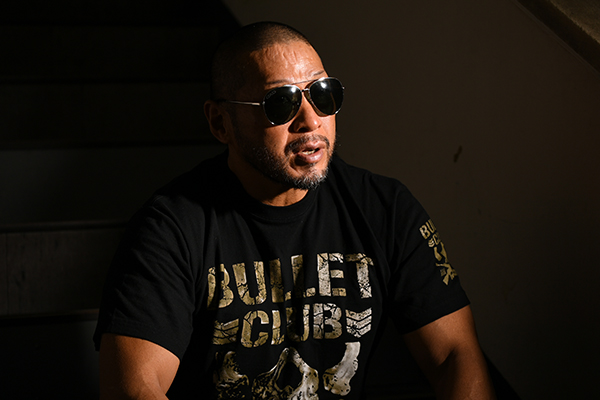 –We’re just coming off your challenge to CHAOS for the NEVER Openweight 6-Man Championships. You took a Vertical Drop Brainbuster at the end of the match. It’s hard to tell under your sunglasses, but it looks like there’s some swelling in your face?

Togo: I dunno, probably off that lunk Ishii’s headbutt at the end there.

–This was your first title match since you came into BULLET CLUB. Were you particularly motivated?

Togo: Look, I’ve been doing this 30 years. I’m not suddenly going to treat a title match any differently to any other match. I’ve had a ton of fights in a ton of situations, you just adapt accordingly.

–Just adapting from being the support player to taking a lead role? You can flip the switch that easily?

Togo: Exactly. I’m a chameleon. Whatever country I wrestle in, I can wrestle that style. Whatever company, whatever rules, whatever scenario, I can blend right in.

–And the situation you’re in right now is?

Togo: The Spoiler. BULLET CLUB’s Spoiler. That’s what I’m paid to do, and I’m damn good at it.

Grandpa Ishii can’t help living in the past 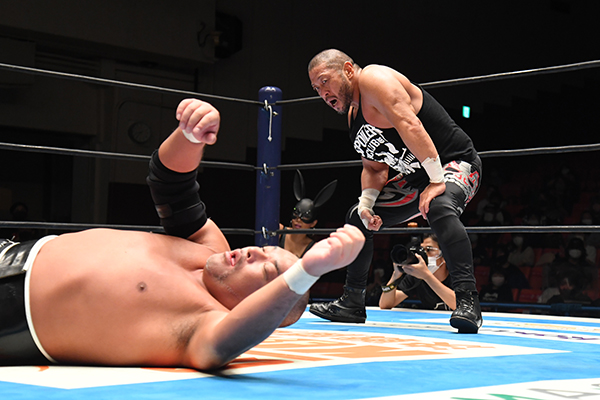 –Going into that match there was a lot of talk about you and Ishii and the past you two share.

Togo: Meh, the past should stay in the past if you ask me. That stuff may have been real to Ishii, but it wasn’t to me.

–Ishii made a lot of references to other stables that you’ve been a part of or even led, in reference to your days in the Far East Connection.

Togo: I thought I was older than him? But ol’ Grandpa Ishii can’t help living in the past I guess.

–After June 7 at Dominion when you choked Ishii out with that steel wire of yours, Ishii said he was ‘glad (you) finally picked a fight’. Were you consciously going after Ishii that night, or just any target?

Togo: Maybe I didn’t make myself clear before. I am here to be the Spoiler, and I was there to do my job. It could have been Ishii or anyone. All that talk about our past and some kind of fated collision, it was all hot air from Ishii.

–So it was all business.

Togo: Look, even if Ishii thought that match was special for some reason, he’s been here for a long time. During that time I’ve been on my own path, fighting my own fights, looking at what was in front of me the whole time. I don’t have any interest in looking back. 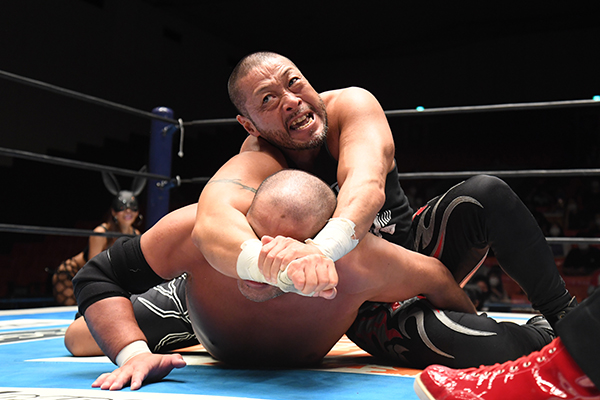 –That said, you and Ishii went blow for blow for quite a lot of your interactions with one another during the title match. That isn’t your normal approach; was there a reason for that?

Togo: I didn’t put too much thought into it, but I guess something subconscious didn’t want to lose out when it came to skill or technique. That stuff was all instinct really. I still brought out the choker when I needed it, but like I said, it’s all about adaptability.

–You dug out the Pedigree and Crossface in that match, two old finishers of yours.

Togo: Well, the opportunity presented itself to use them, so I did. That’s all it was. When it comes to making the right move at the right time, you aren’t going to get the drop on me.

–In the end Ishii powered the choker out of your control, and it went down to a fair fight.

Togo: Hmm. I hate to say it, but that match had gone 30 minutes at that point and I was spent. Usually I’m in the best possible shape a cornerman can be in. This time the situation was different. I screwed up, tactically. I admit that.

It wasn’t Jado & Gedo. It was all EVIL 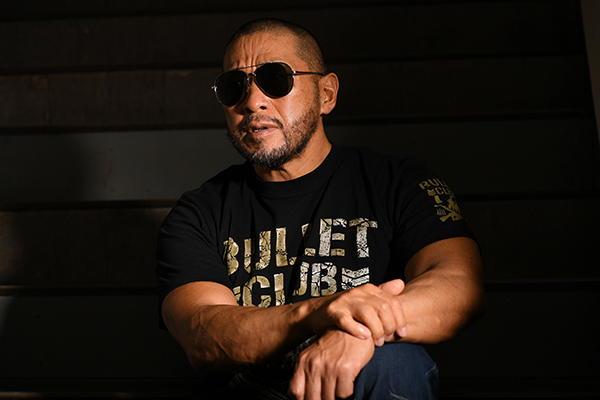 –You’ve been in BULLET CLUB for a year now, and I thought we could go over what’s happened over the last 12 months.

Togo: It’s gone by in a flash, since EVIL gave me the call. And for the record, it wasn’t Jado and Gedo calling me in. It was all EVIL.

–A lot’s happened over the last year.

Togo: Right. I’ll be honest, when I first got that call, I didn’t know all that much about EVIL. But it was an opportunity, and ever since then we’ve built up a sense of trust. We’ve had a vision, we’ve had a gameplan and we’ve stuck to it, no deviation. That’s made us completely unique. Nobody fights the way we do. 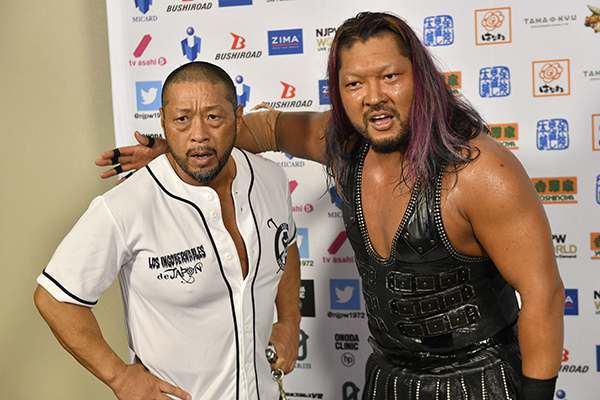 –What were your thoughts on BULLET CLUB before you came in?

Togo: Well, with the foreign wrestlers they’ve had over the years, it’s made them a really refined heel faction. And Jado and Gedo being there was big for me- we’ve been connected for 30 years. It’s weird. Like I said about Ishii, I don’t have much time for reflecting on the past. I can’t remember names of people I met just recently. But those first days for me in this business, they’re burned into my memory.

–That’s how significant Jado and Gedo are to you.

Togo: And I think maybe it’s because they were there I fit in right away. It feels like I’ve been in BULLET CLUB for ten years already, to be honest.

–You’ve been all over the world over the years. What are your thoughts on the other members of BULLET CLUB?

Togo: Everyone is great at what they do, Jay White especially. Considering where he is in his career experience wise, his way of expressing himself, all the little things he does are perfect. I always think that the foreign wrestlers are better at that kind of thing than Japanese wrestlers. In a way, I’ve been able to up my game being here as well.

–Was it motivating, to be in a new environment?

Togo: It was exciting to be a part of what’s next. Thing is, just having matches, that’s not what motivates me. I’m in control of that, I’m creating that scenario, and I know that I’ll be the best in any situation I’m put in. So being in EVIL’s corner instead, that’s what’s been motivating.

The fans’ worst case scenario is our best 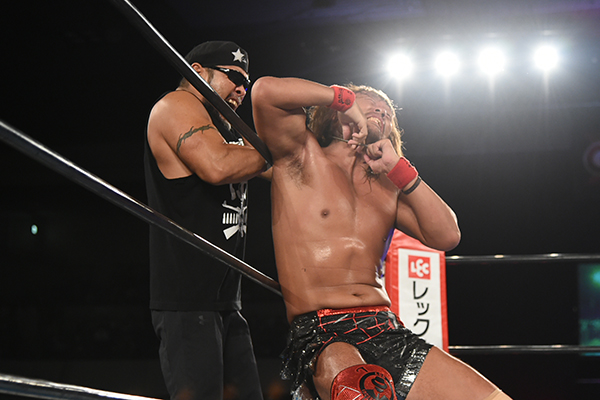 –There was a lot of criticism of EVIL’s championship reign last summer, and your hand in it. What were your thoughts at the time?

Togo: Nothing. Neither of us really care for what other people might think. We do what we want, and if that makes people unhappy, then that’s what makes us happy if anything. Their worst case scenario is our best. The more it pisses people off, so much the better. What are you gonna do? Make a nasty comment? I’ve had rocks thrown at me in Puerto Rico, nearly got killed in Vietnam…

–You nearly got killed?

Togo: Well, that wasn’t wrestling related. I was working as a bodyguard in a casino, and there was talk that the mafia was looking to do me in. Point is, I’m used to that kind of stress. I live off it. Nothing can happen now that’s gonna scare me one bit.

–You’ve been battle hardened in a very real way, in other words.

Togo: The old days, even in Japan, you’d go home to see a crowd of pissed off fans around your car. Back then it was just ‘oh, they’re mad’ and you laugh it off. Now, worst they can do is talk trash online. Not even much of that anymore. That just makes me want to act up even more, heheheh.

I’m not his advisor. I’m his co-conspirator. 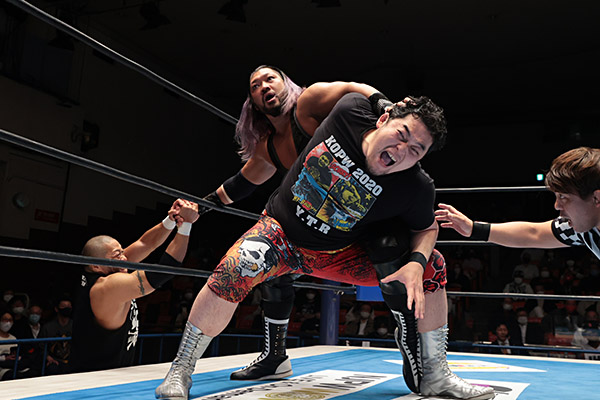 –So what are your thoughts on EVIL as a professional wrestler?

Togo: He thinks a lot about this business. He reminds me of a young me. And to have already held the top title in the business at this stage in his career says a whole hell of a lot. He sets the highest bars for himself, and clears them. He’ll only continue getting better.

–Do the two of you talk much about your matches?

Togo: Of course. We have a similar way of thinking about things. So even though I’ve been in the business as long as I have, I’m not his advisor. I’m more his co-conspirator, heheh. After all, we both want the same thing, for him to be the top dog.

–You haven’t really had much experience in a managerial role before this, right?

Togo: None. But being in the support role is fine for me. 30 years in, I’m not looking to be front and center, but when push comes to shove, I’ll take care of business gladly. These guns are always ready to fire.

–Has EVIL changed any since you started working with him?

Togo: He’s stuck to his guns the whole way through. That’s the thing. Nobody’s as committed as us.

Without controversy, there’s no pro-wrestling 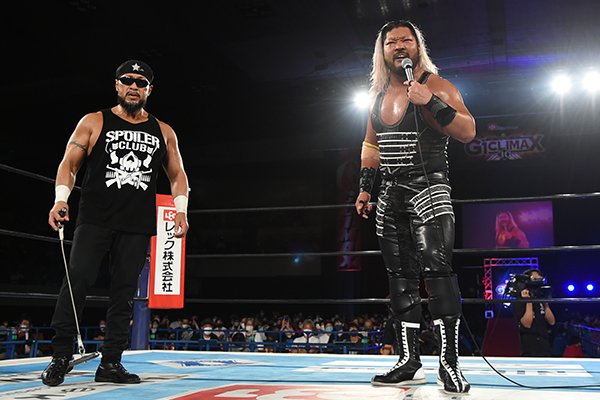 –You’ve been a part of NJPW a few times on and off through the years since 1994. What does New Japan mean to you?

Togo: I’ve been an indie guy my whole career, so every time I come here it’s amazing. A lot has changed over the years, but in the ring, where it matters, that’s still the same, still the best in the world.

–Who in particular has impressed you?

Togo: Uemura, Tsuji, those kids have something special. Shingo is a great wrestler too. But there’s nothing he does, or anyone does that EVIL can’t do better, and he can prove that anytime.

–I know you’re focused on getting EVIL back to the IWGP World Heavyweight title hunt, but do you have any goals as a wrestler yourself? Some fans have been talking about wanting to see you in Best of the Super Jr.

Togo: Hmm. Call me contrarian, but if people want to see it, I don’t want to do it. Every time I see those tweets saying ‘I want you in’, it makes me think ‘I want out’. Right now the most important thing is to have EVIL take over the world. That and controversy.

Togo: Controversy is what drives this business. It’s what pro-wrestling needs. I want to cause a controversy that people will talk about 20, 30 years from now. And remember- the fan’s worst case scenario is my best one! Ha!