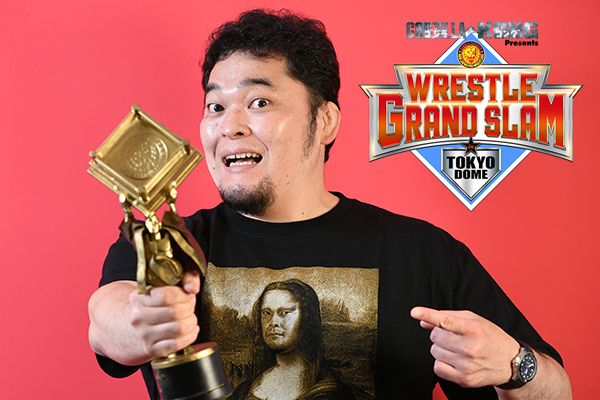 Last week, it was announced that Toru Yano’s KOPW 2021 trophy would be defended at Wrestle Grand Slam in a New Japan Ranbo. Yet that isn’t the end of the story. Some unique rules are in store for the Tokyo Dome; to talk about them, and his impressive reign across two years, we spoke to the King of Pro-Wrestling himself.

Or order in English or French on FITE!

–You were the only holder of KOPW 2020, and you’ve held on to the trophy all year so far. You’re the real Mr. KOPW.

Yano: I guess so! It’s a tricky spot to be in, in more ways than one…

–You’ve mainly defended against international wrestlers, and in some strange scenarios.

Yano: Because each wrestler brings their own rules, it’s easy to get stuck falling into your opponent’s gameplan. So it isn’t an easy title to challenge for. You have to come up with your ideas for rules, and then you have to get past the fan vote.

–You have to have an idea that wins the public over.

Yano: It’s a bit of a popularity contest as well, for sure. That makes it intimidating for a lot of challengers. It’s a hard title to challenge for, let alone win.

–That’s a big part of why you’re the only holder.

Yano: Well, as long as I have this trophy, I’ll be bringing my own weird rules to the table (laughs). I’m conscious of that. But I think what makes wrestling fun is the breadth of it, the different things it can mean, and the different circumstances you can bring. I think that’s why Okada came up with the title in the first place, and it’s a good way of showing the light side of pro-wrestling while the world is still in the state it’s in.

–Okada perhaps didn’t envision you having such a monopoly on the trophies.

Yano: But if you think back to those first round matchups last summer, you had SHO and SANADA in a submissions match, a real straight ahead bout. I think there is that possibility for an opponent to come up with rules that are completely different to mine, and have that be a point of contention. There are a ton of possibilities for this title.

–You’re the one who proposed a New Japan Ranbo for the KOPW 2021 in your backstage comments lately.

Yano: Well, a big part of it, with the pandemic continuing, there are fewer cards, and fewer matches on each card. So priority number one was figuring out how to get myself booked at the Dome (laughs).

Yano: The Ranbo is a bit of a Tokyo Dome tradition after all.

–Having kicked off Wrestle Kingdom between 2015 and 2018, as well as this year, it’s always set the pace for the card to come.

Yano: Tokyo Dome cards are like festivals. They’re a fun way to get everyone involved, everyone happy. It’s win win all the way around.

–You had to make the most out of that concept then.

Yano: I think I was a bit impatient with my wording backstage, but I figured it would be announced soon enough anyway.

–So this is the second Ranbo with KOPW 2021 implications after January 4.

Yano: Back then it was to qualify for a vacant title. This time I’m defending against all these guys, so it’s a real case of my generosity as champion.

–It certainly would appear that way.

Yano: Everyone gets a shot, and it would be fun for the fans too. But one thing I did hear at Wrestle Kingdom was that with no fan poll, KOPW seems a bit meaningless.

–Ah, with no stipulations, there’s no vote.

Yano: That’s why, since I proposed the Ranbo, I’ve decided on rules for the fans to vote on.

–So there will be a vote?

Yano: Audience participation is a big part of what KOPW is, so there will be a vote. 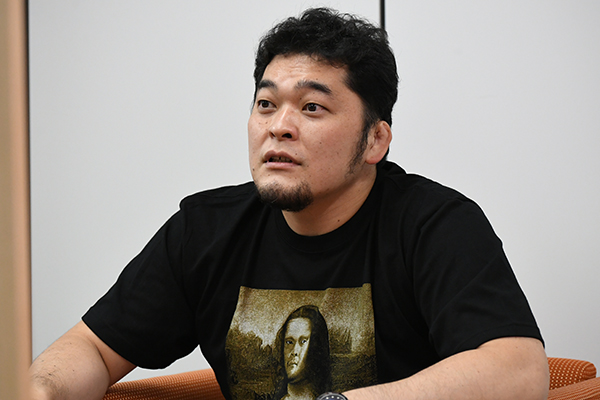 –So… what are these stipulations, exactly?

Yano: Right. On the guardrails and the ropes will be handcuffs set up to use. The Ranbo is as normal, when you’re pinned, submitted or thrown over the top you’re out, but you can also be put out by being handcuffed, and then you’re stuck there for the rest of the match! Completely humiliated!

–And the other rule?

–Blindfolds in the mix, after your match with EVIL a while back.

Yano: With EVIL, you had to blindfold your opponent to pin or submit them. This time, the point of the Ranbo will be to put a blindfold on an opponent to eliminate them.

Yano: Plus! The blindfolds will be suspended in different positions in and around the ringside area. Enough for every participant.

–So anyone can blind anyone else at any time.

Yano: You can still win by pinfalls or over the top rope as well, so there’s a lot of possibilities there.

Yano: Whether its blindfolds or handcuffs, NJPW will have to prepare as many of each as possible to make the rules viable. That’s a key point here 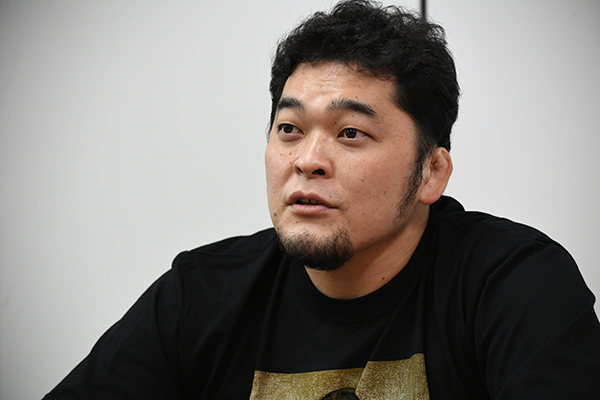 –So those are your proposals.

Yano: Well, in the end it’s up to the company, but as the holder of the trophy, that’s what I suggest. I guess either way it’ll be a ‘YTR style Ranbo’

–Certainly they both have your unique character to them.

Yano: In the end, I want the fans to enjoy voting. I think it’ll get more eyes on the match, and it’ll be interesting to see whether the fans like handcuffs or blindfolds more.

Yano: I don’t think the results will be useful to statisticians anywhere (laughs). I think there’s something to having a completely obscure test of the will of the people. Everyone should vote! Unless you’ve experienced one or the other and have some sort of trauma attached to them.

–But you want as many people as possible to vote.

Yano: I don’t know whether the choices will make for a more fun match or just make it more difficult (laughs). But I think either way it gives the wrestlers more options to win in the match. It makes things completely unpredictable, which I think is what it should be about.

–It certainly does make for a tough one to call.

Yano: Like, anyone could surprise you from behind with a blindfold, or sneak up and handcuff you. I want to see that kind of scenario play out. Plus it’ll make for some fun photo ops!

–Even the mystery entrants and entrance order makes for an intriguing match.

–Qualifying you for the next night’s four way even though you never had to get in the ring.

Yano: It might be a similar deal this time, it might not. But I think that needs to stay a mystery. It’s not as fun otherwise.

–And we won’t know who’s in the match, or if there are announcements, there might be surprise entrants.

Yano: That’s important for the company to sort out. I want a real festival, get people intrigued, and make it as fun as possible.

This trophy’s a fragile creature 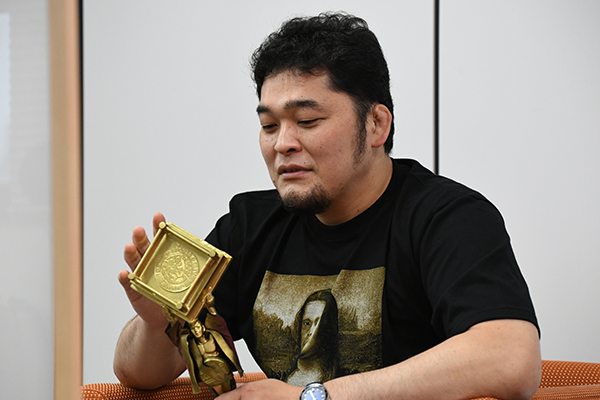 –Between being smashed and painted black, that KOPW trophy has been a target in more ways than one as well.

Yano: She’s a fragile creature. Even just bumping it against the ropes makes me nervous (laughs). You can actually see it’s a little top heavy here. If you hit that just right, it falls apart.

–It wasn’t exactly built to last.

Yano: It’s pretty shoddy! I can usually cover the legs with my hand as I enter, but the head is defenceless. But that’s a part of the charm. To be a manly defender of this beautiful but frail lady (laughs). Before when the paint’s come off, I’ve given it another coat, but that’s the  only changes I’ve made. I think the changes for this trophy over time is another part of the appeal.

Yano: It’s pretty dangerous. I get that. But if I get through the Dome, I’ll be close to holding a KOPW trophy for a full year. So I have to keep pushing ahead with more new and different things. KOPW offers the best way to do that. 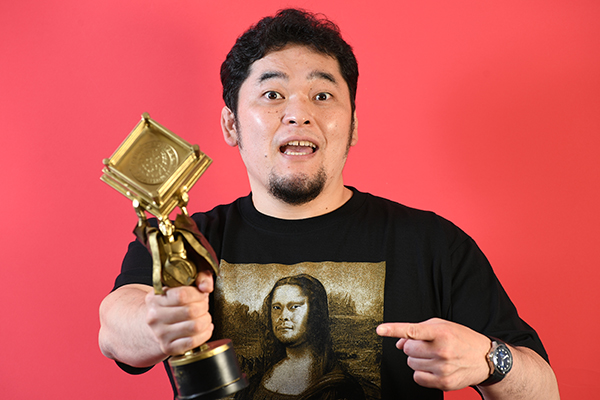