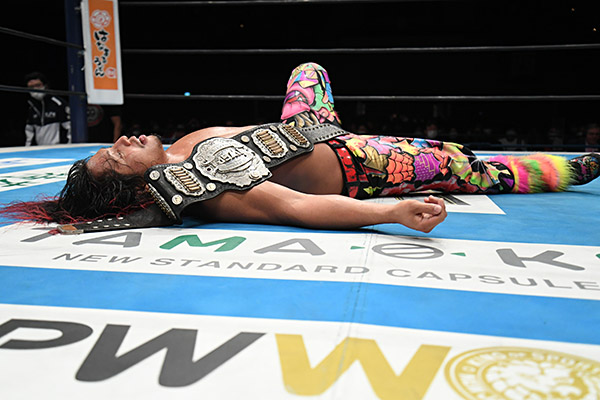 The IWGP Junior Heavyweight Championship remained with champion Hiromu Takahashi after the main event of night one in Hiroshima at New Beginning, with Hiromu defeating SHO before being confronted by El Phantasmo.

Champion and challenger charged at one another with full force at the opening blow, before exchanging furious elbows as the crowd clapped their approval. It was, indeed, all elbows for the first five minutes of the match, as each man tested the other’s jaw, and even continued throwing outside the ring, only rolling inside to break the referee’s count before Hiromu finally garnered the upper hand with a shot into the guardrail. 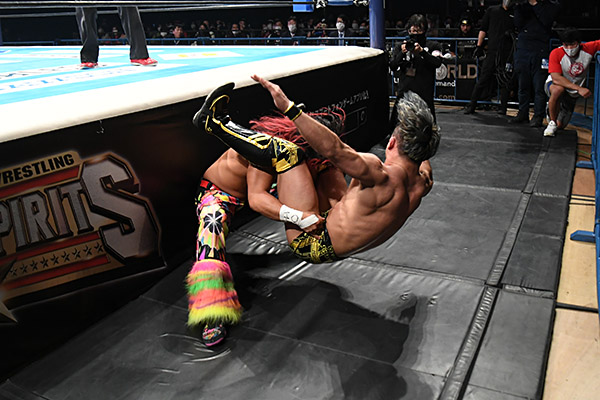 Now with the advantage, Hiromu kept up the elbow shots from the mount in ring, now taunting his challenger to fire back. That SHO finally did with a spear at the second time of asking, before laying in kicks to the back and chest. A Complete Shot cut SHO off though, and as the crowd came alive, SHO found himself flung into the corner with an overhead belly to belly into the corner at the ten minute mark.

Hiromu wanted to follow with a Sunset Bomb onto the floor, but SHO read the move, bringing Takahashi out to the apron with him. Before SHO could land a critical blow, Hiromu responded with a thrust kick, and finally landed the powerbomb to the floor. SHO thudded to the mat with title hopes seemingly in severe danger, but moments later it was the challenger responding with a powerbomb of his own onto the apron; Hiromu barely breaking the referee’s count at 19.

Back inside, SHO continued dealing damage to Hiromu’s neck, a pair of German suplexes being followed by an attempt at a cross arm breaker that sent the champion to the ropes. Driven by the desire to become champion, SHO rolled to his feet after a counter German from Hiromu and kept roaring forward, even muscling out of Hiromu’s triangle in the ropes before landing a powerbomb in ring. 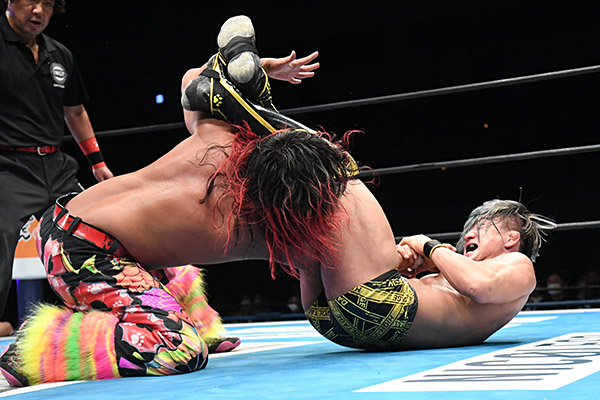 After the champion escaped a cross arm piledriver attempt, the match continued where it started, each man exchanging vicious elbow knockdowns. Hiromu caught a break into D, but SHO would transition, putting the champion in grave danger at the 25 minute mark with a double wrist lock.

Takahashi found the ropes, but SHO found Powerbreaker moments later, closing in on victory and drawing the bow on Shock Arrow. The now desperate Hiromu reared back with a headbutt on his challenger, but a Rocky Romero style Nomisugi Knee kept the advantage with SHO. As both picked themselves up off the mat with the crowd willing champion and challenger on, SHO landed a backcracker and a series of lariats, but the champion refused to hit the mat, finally being knocked down with a fifth lariat for a two count at the 30 minute mark. 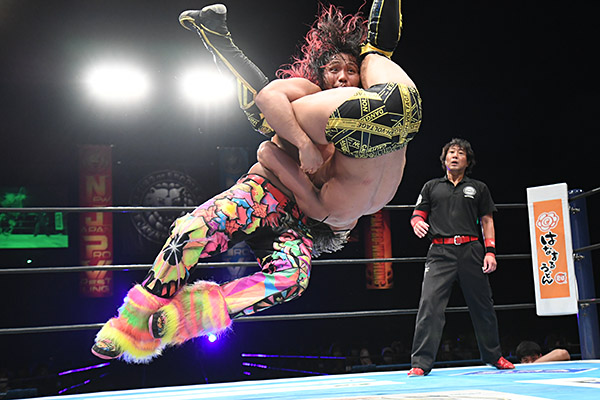 A cross arm piledriver followed, Hiromu barely escaping at two before shifting his weight to avoid the Shock Arrow and hit somewhat of a DDT. A Victory Royal put SHO to the mat with more authority, but it wasn’t enough to end the match, nor were successive superkicks enough to put him to the mat, SHO refusing to stay down and transitioning to an arm lock before Hiromu muscled his opponent into the corner.

A corner DVD was followed by a center ring Time Bomb, but SHO escaped before the referee counted three. With the match passing 35 minutes, Hiromu finally put SHO to the mat with a lariat, before Time Bomb II connected for the victory. 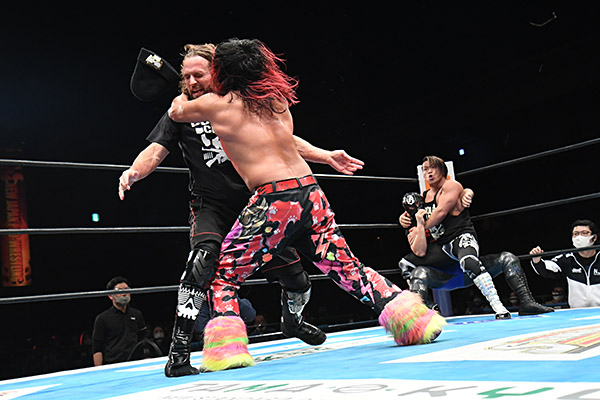 Post match, El Phantasmo hit the ring, and looked for the Sudden Death superkick, but Hiromu avoided the boot, and when Taiji Ishimori entered to help put a beating on the champion, BUSHI evened the odds. Phantasmo challenged for the IWGP Jr. Heavyweight Championship, a match Hiromu accepted, under the condition that ELP and Ishimori put the Junior Heavyweight Tag Team Championships on the line in another match; stay tuned for more information on both title pictures.