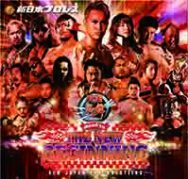 After the decisive victory, Taguchi grabs the microphone to talk to the crowd.
After the previous night’s victory, Taguchi wants to thank the fans and give them a little taste of what’s on his kooky mind.
This includes, of course, chants of “WE ARE TAGUCHI JAPAN!”

Taguchi:
'Tranquilo everybody, tranquilo....Thanks so much. We are Taguchi Japan. (Applause and cheers) I am Coach Ryusuke Taguchi. Thanks to everyone for coming out to see us in lovely Kanuma, Tochigi! (Applause) Today, Taguchi Japan's players really gave it their all. (Laughter) The fruits of their labor, you could say. Now I say "Taguchi Japan", but we have managed to sign some great talent in the form of Dragon Lee and Michael Elgin. They add some serious versatility and strength to our roster and I can't thank them enough. We've been the breakout team this season, and I always tell the boys in the locker room, "Enjoy your time in the spotlight boys. Shine bright. Go out there shine like the LED's you are!"' (Laughter)

'That’s what I'm always telling the boys in the locker room, I tell them, "Take care of the environment. It'll keep your bills down too, y'know."' (Laughter)

‘"Don't waste energy", that's what I always say. Taguchi Japan is eco-friendly like that! (Laughter) So everyone, thank you once again, and keep cheering us on!' (Loud applause and laughter) 'Ok everyone, tranquilo...tranqui~lo. '

(With his hand to his ear, Taguchi seems to receive a message through his imaginary earpiece)

(Taguchi turns to Elgin and blurts out in English)

(Turns to the crowd)