B Block do battle in Ota

Friday night in Ota, it’s the turn of B Block in their second matches of the G1 Climax 31 campaign. Half the field look to extend their scores, while the other half are trying to get on the board as the tournament continues. 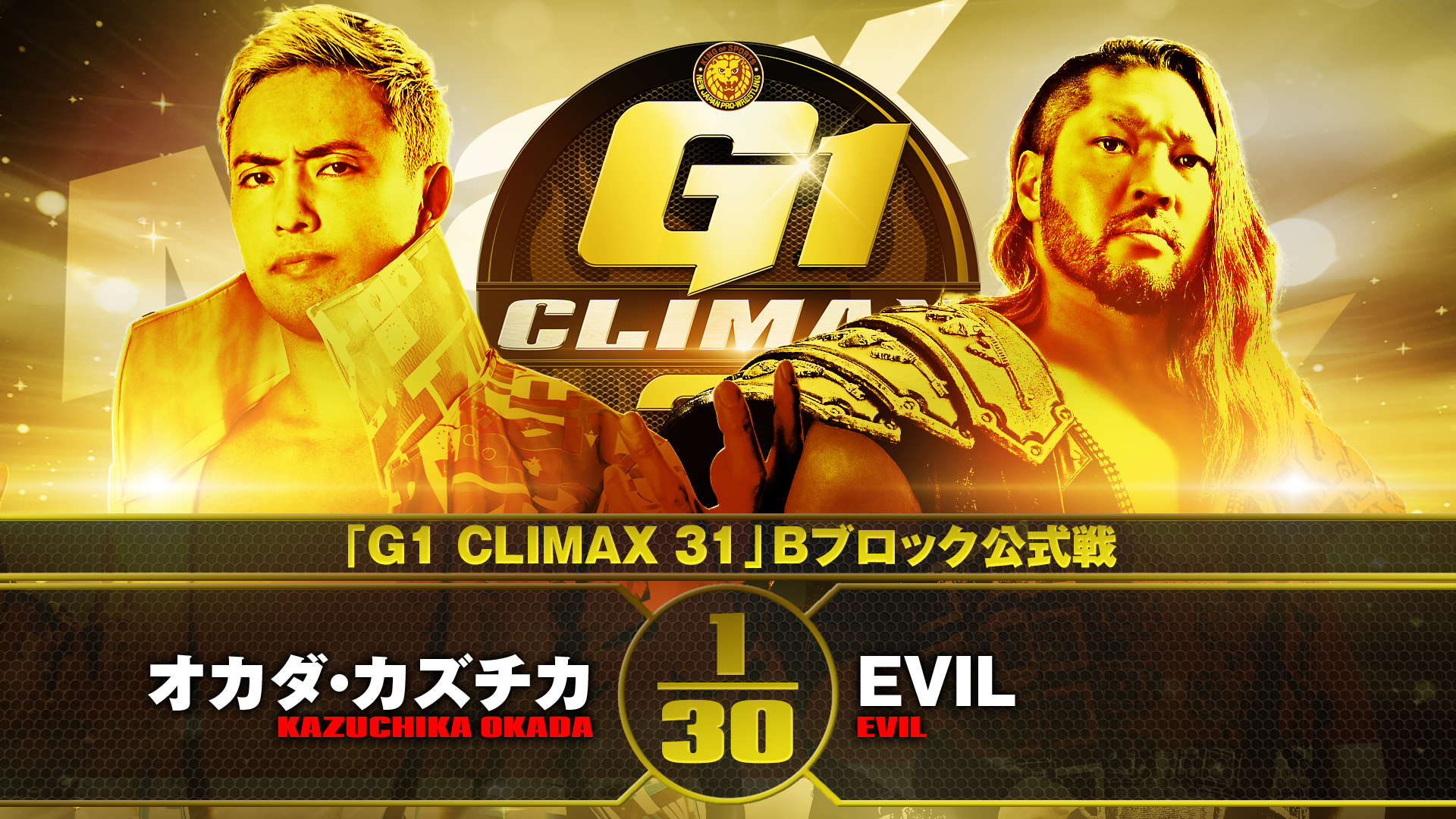 Sunday in Osaka saw what could well be one of, if not the most enduring memories of G1 Climax 31 made, as Kazuchika Okada defeated Hiroshi Tanahashi in the main event to get his first two points, and declared that the Rainmaker had returned. Yet the same night’s tournament action began with EVIL gaining his first two points by doubling down on the shortcuts and rule breaking that have defined his own career over the last 15 months, casting a shadow over the remainder of the evening as Dick Togo’s interference and a low blow led to YOSHI-HASHI tasting defeat.

Okada is well aware of how dangerous EVIL is both as a relatively straight laced, if rough-hewn competitor, and as a man willing to take every available chance to cheat his way to the top. In G1 Climax 2016, their first singles meeting in Osaka saw Okada’s unbeaten streak that year derailed by the King of Darkness, while the 2020 New Japan Cup final saw EVIL cement his defection to BULLET CLUB from Los Ingobernables De Japon with an interference marred victory.

Okada started his 2021 determined to get back in New Japan’s top flight, and decided that exorcising the spectre of his NJC 2020 final defeat would be the best way to do it. EVIL frustrated the Rainmaker at every turn in his quest to get the singles bout, including a Hiroshima sham of a match that quickly ended in a disqualification, but ultimately it was Okada victorious at Castle Attack at the end of February. Can Okada maintain his momentum against EVIL after bad Osaka memories were banished, and proud ones created after another match of the year candidate with Tanahashi last weekend? 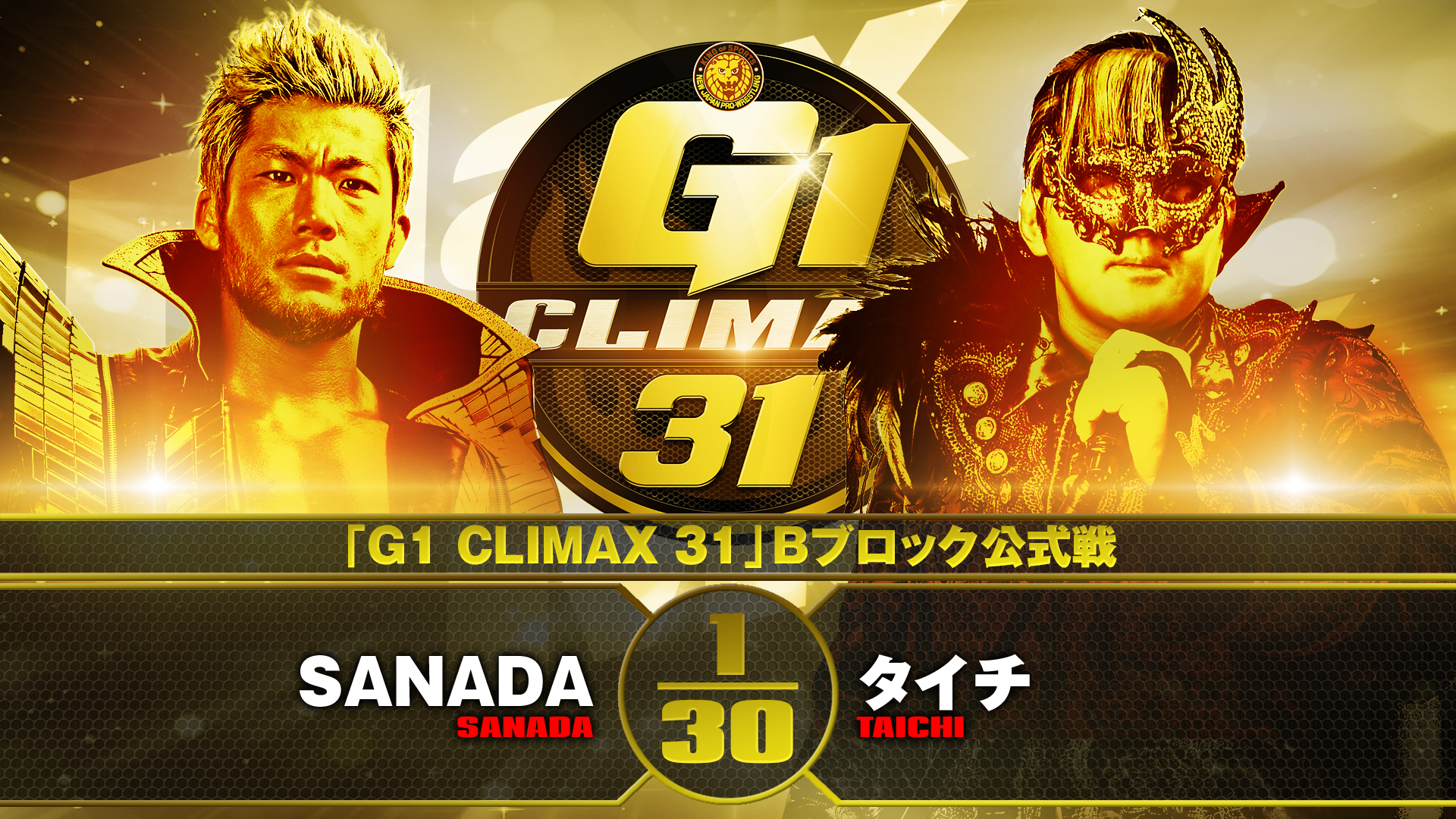 SANADA and Taichi both seek to move to four points in the semi main event of the evening, in a match built on some mutual respect between the competitors, albeit tempered by a good bit of frustration on Taichi’s part. In two singles confrontations, SANADA has scooped the win, both with flash pinning combinations rather than a convincing impact or submission. Taichi was able to enact some revenge for his defeats at MetLife Dome, when he was able to blind tag himself in and SANADA out in the IWGP Tag team Championship three way and pick up the victory for Dangerous Tekkers, but this is a match that Taichi desperately doesn’t want to lose.

Despite SANADA’s artful means of securing victory over the Holy Emperor belies a knowledge that this match will likely be a violent one indeed. Taichi’s opener against Hirooki Goto set a hard hitting standard for his matches to come, and when these two men met in Osaka two months ago, the result was a match that threw back to Taichi’s idols of All Japan of old, with head dropping maneuvers to match. With pride along with points at stake, this should be an impactful bout. 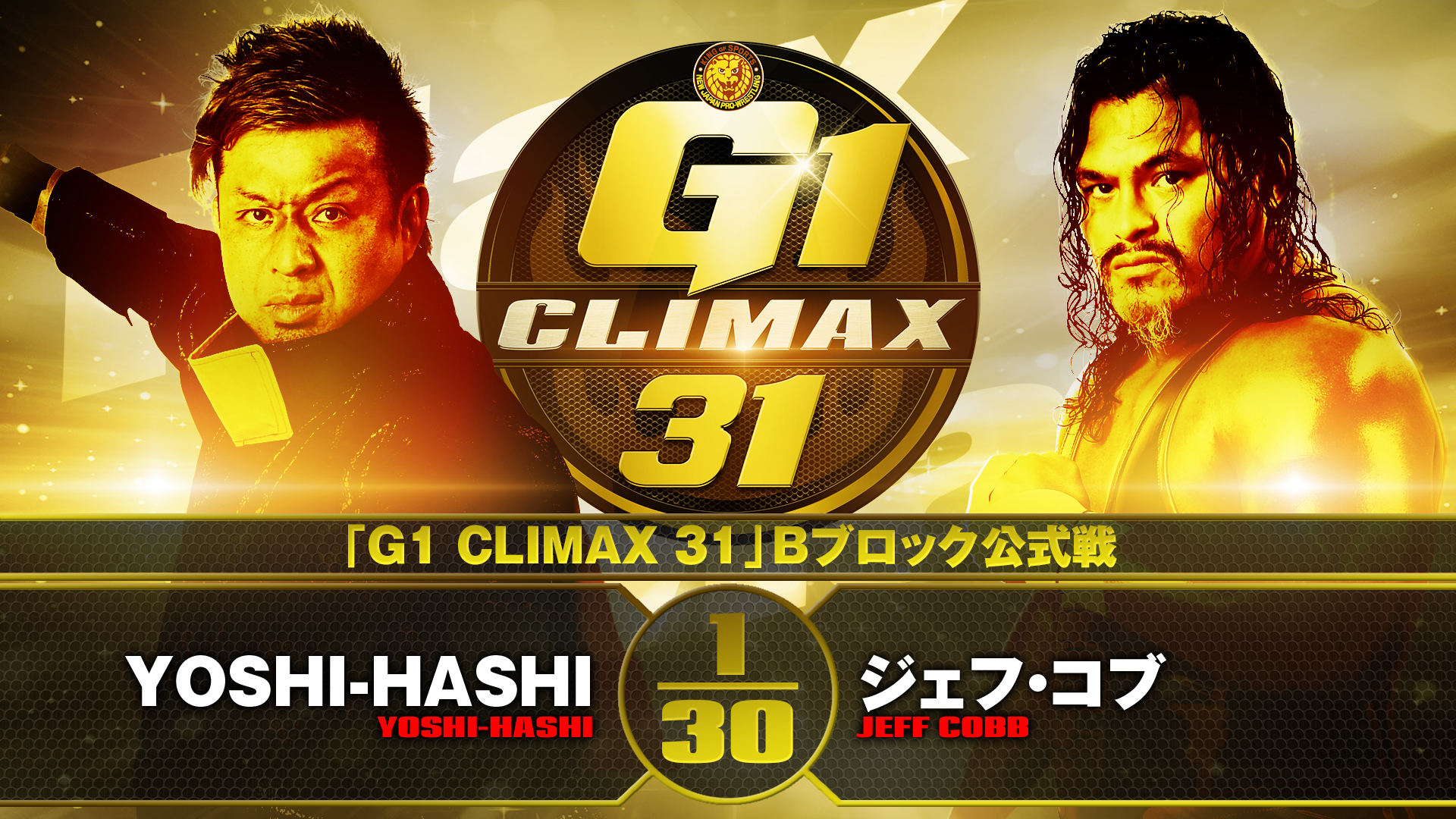 A first time singles matchup in the third bout of the evening sees Jeff Cobb look for his second win of the tournament while YOSHI-HASHI fights for his first. Despite facing a game Chase Owens in Osaka, Cobb showed every bit of the speed, power and precision that makes him one of the tournament favourites, and will be a tough mountain to climb for YOSHI-HASHI. After showing trademark heart in the face of a stacked deck against EVIL in Osaka though, does the Headhunter have what it takes to get on the board? 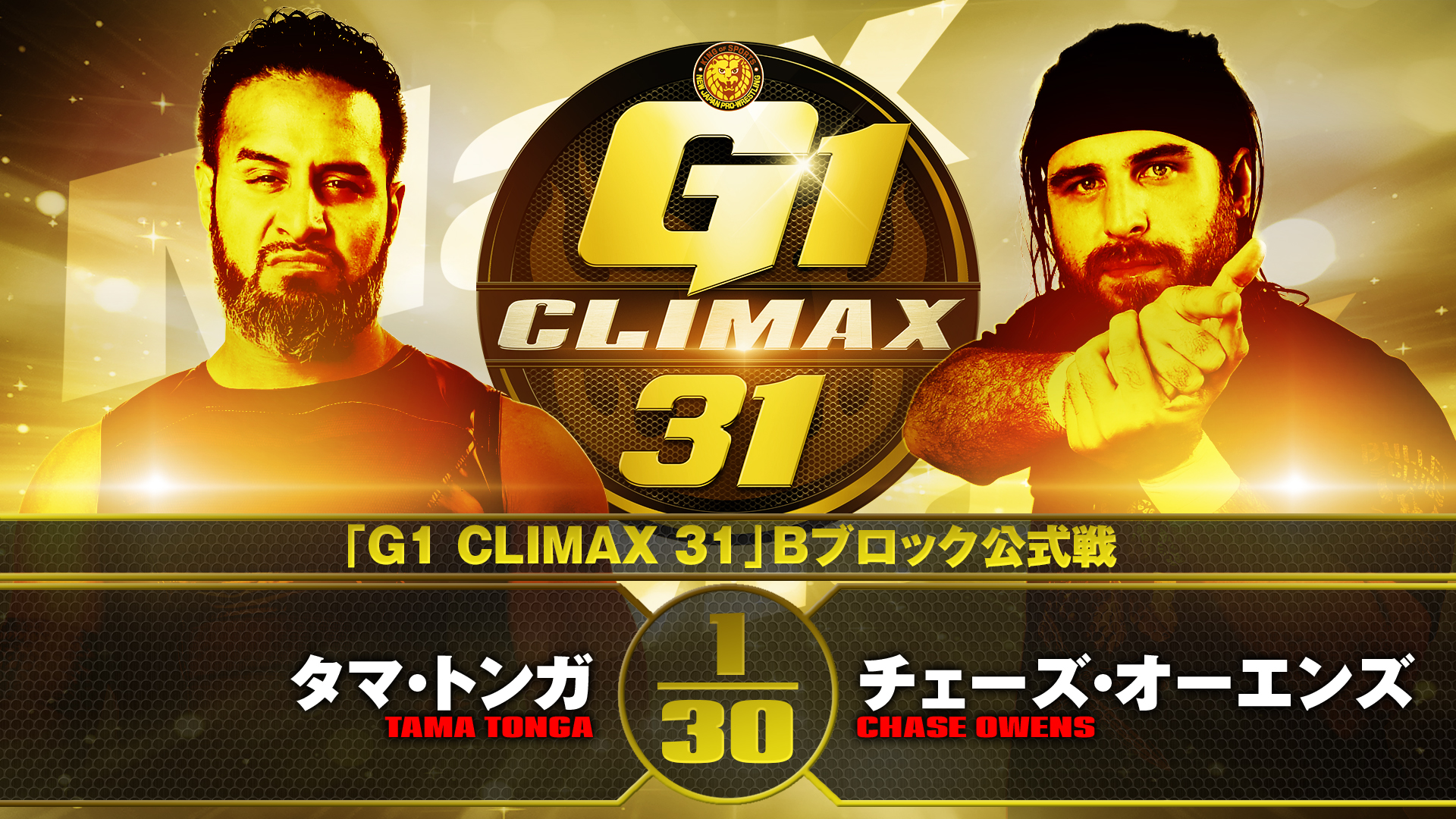 After Yujiro Takahashi meets KENTA on Thursday night, the second BULLET CLUB derby of this year’s G1 sees Tama Tonga and Chase Owens face off. Both Tonga and Owens have talked about wanting to be recognised for their own abilities as being deserving of their spots in this tournament, and both are likely to fight hard regardless of allegiance tonight.

Opposite Jeff Cobb and SANADA, Owens and Tonga brought energy and aggression to their opening efforts that presented difficulties to top flight opposition. To what lengths will they go to get their first wins of G1 31? 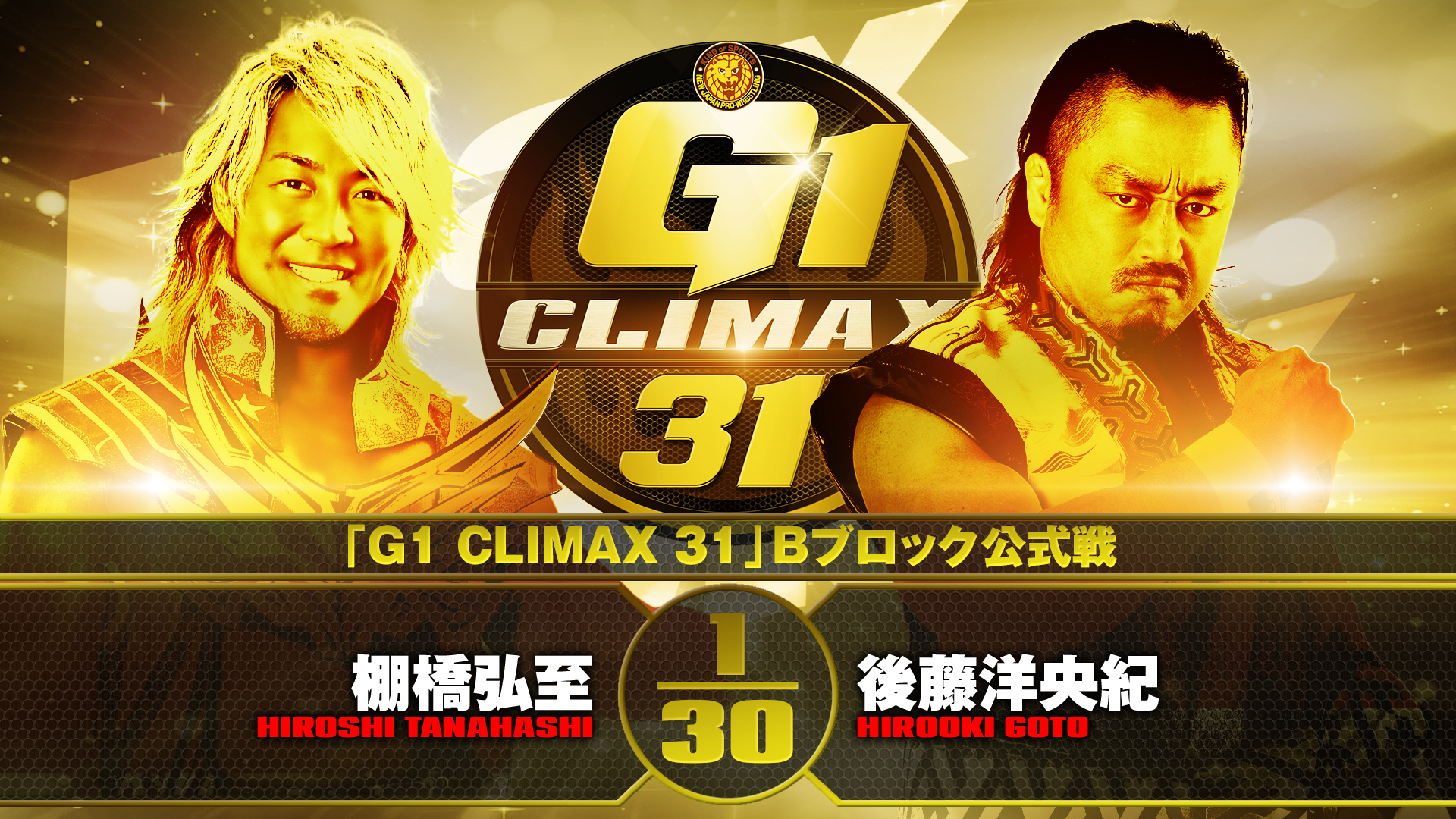 Testament to a card full of intriguing encounters, Hiroshi Tanahashi and Hirooki Goto kick off the evening with a match continuing a 17 year history. Tanahashi has brought the hard hittign best out of Goto, in particular since Goto’s 2007 return from excursion, and an IWGP heavyweight Championship bout that year that remains a career favourite of both men. Yet despite the heavy duty offense of Goto leaving more than a few marks on Tanahashi, wins have been thin on the ground for Goto.

New Japan Cup 2012 was when Goto finally cracked the Tanahashi nut, to win the cup that year. In last year’s G1, a second win for Goto over the Ace kept him alive toward the end of the tournament while Tanahashi was effectively eliminated. Can Goto, undefeated in tonight’s venue in four singles bouts, grab a third tonight in Ota, where Tanahashi lingers at 1-3?