–So, let’s get into your 2010. That year on January 4, there was an NJPW vs Pro-Wrestling NOAH theme to the card, and you wrestled Go Shiozaki. Shiozaki had taken his first GHC title at just 27, and this match was being billed as a ‘battle of the Aces’.

Tanahashi: His style had just the right flashiness to it, and he was a really good looking guy so he really fit the babyface mould. Definitely my kind of wrestler.

–You had the home field advantage so to speak, but Shiozaki was still playing to the crowd, preening and getting the fans riled up.

Tanahashi: I think he was still relatively inexperienced at the time, and he was in unfamiliar territory. So I think he was trying to rub the people the wrong way, and wondering just how much he was able to get away with. I think given the situation I needed to stand in contrast to him to make our roles pretty distinct, but he ended up fighting a lot rougher than I expected. 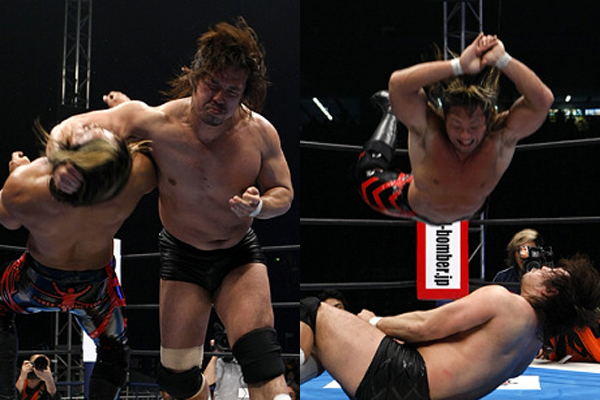 –He sent you hard into the ring post outside. And then there was that chop battle…

Tanahashi: The chop battle was intense. His lariat was the same way- there was definitely a bit of ‘Kobashi-ism’ to his style in there. Obviously he had been GHC Champion at that point, so obviously he was tough, but he was better equipped on the ground than I had expected, a really good all-rounder. This was a real chance for him to put himself on the map, and I think he definitely showed up. I definitely got the feeling he would be able to wrestle on a grander scale and carry NOAH in the future.

–You won with a High Fly Flow. Shiozaki said afterward that he ‘underestimated’ you, saying ‘I thought he was more style than substance, I was wrong’.

Tanahashi: I think he deserved to be more popular than he was. He would go on and have some issues with Hirooki Goto as well. I think he was a little too serious and in his head at this point in time. If he was able to relax and enjoy the task at hand a little more, it would have done him good. 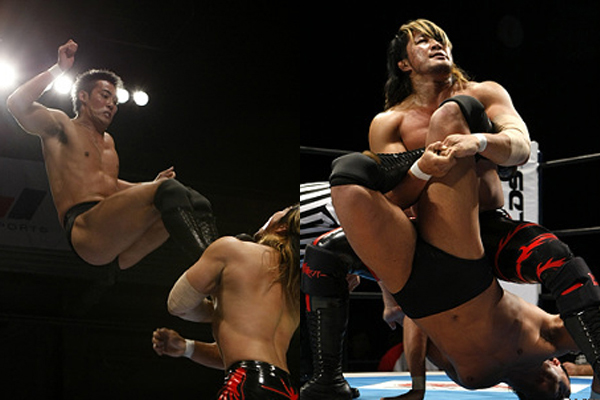 –On January 31 that year, you had Young Lion Kazuchika Okada’s sendoff match.

Tanahashi: That’s right! Wild to think about in hindsight, huh…

–And you came off that match to wrestling Tetsuya Naito after his own return from an excursion.

Tanahashi: I guess I was a turning point for both of those guys. When you think about it, 2010 was really the beginning of a new era in NJPW.

Tanahashi: I mean, he definitely had all the physical tools, but his vertical leap was just off the charts, and that dropkick was unreal, even then. No pun intended, but he had a lot of upside, he just hadn’t put it all together at that point; he was a Young Lion after all. Obviously he was able to do that on excursion; after all he came back and won the title from me when he did. I was able to experience that growth directly; I always thought he had potential, but I didn’t know he would be able to progress quite this far.

Tanahashi: Okada had transferred into NJPW from Ultimo Dragon and Toryumon, so he had some experience, but didn’t have the body at that point, so he really had to start from scratch. In the end though he went from that lucha base to learning the NJPW style, and then incorporating American experience into that, so he really had the best of all those worlds. That’s why he’s able to have great matches with just about anyone, why he was able to string together all those match of the year awards. The only time I’ve been able to take that award, it was against Okada, heh.

–What were your thoughts on him as a Young Lion in general?

Tanahashi: He was someone that the older guys really liked from day one. Very outgoing, personable. Back then Taichi was still in Hontai, and he and Okada got on well. The three of us would play Nintendo DS together, having a little Dragon Quest group (laughs).

–So you were fairly close to him back then?

Tanahashi: Maybe too close, I didn’t intimidate him enough, heh. I guess on a lot of levels I underestimated how far he’d come.

–Apparently when Tetsuya Naito had his own sendoff party in February 2009, you teased him by saying ‘the future belongs to Okada anyway’. Okada was always big on Naito’s radar.

Tanahashi: Heheh, just a little bit of psychology on Naito when he was dead drunk. But at that point I thought it was weird that Naito was so wary of Okada. I guess it’s because he wrestled him more than I ever did, so he knew first hand just how far he would progress.