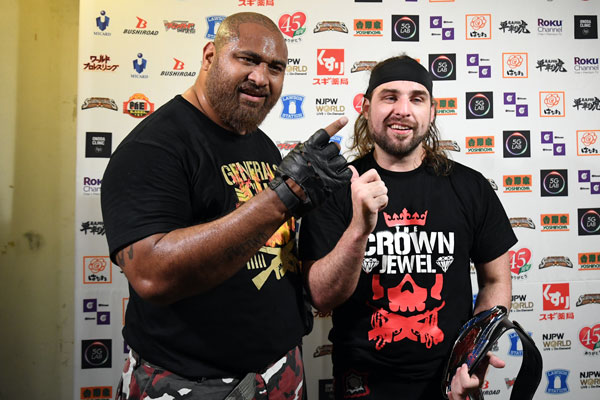 World Tag League is already underway, and with three matches wrestled for each team, Bad Luck Fale and Chase Owens have inarguably impressed. With Grenade Launchers delivered to both the United Empire side of Aaron Henare and Great-O-Khan and the HOUSE OF TORTURE tandem of EVIL and Yujiro Takahashi, Fale and Owens are on an impressive four points, and could easily factor into the conversation come December 15 in Ryogoku. Before their tournament got underway, we sat down with both Fale and Owens to talk about their campaigns, and just what Fale has been doing during his time away.

After all these years, we’re finally taking Tag League 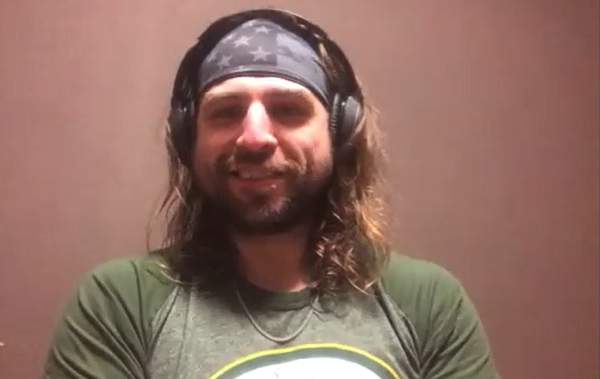 –So, Fale and Chase, we’re speaking remotely right now with both of you on your last days of quarantine after coming back to Japan.

Fale: Of course I’m focused. No haha here, we’re a serious team. After all these years, we’re finally taking this Tag League.

Chase: It’s been a while though, I hope our chemistry is on point… 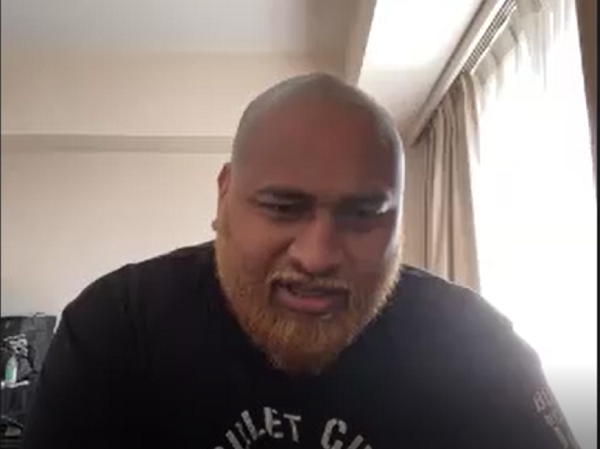 Fale: I’ll be following your lead. You’ve had that KOPW run this year, and I think I can count on you, follow your lead and we’ll go all the way.

Chase: We’ve got this.

–Of course, both of you guys started the year going after the KOPW trophy, and since Fale has been away, Owens was able to take it briefly.

Fale: Hey, that’s more than I had…

New Japan is my top priority, and Japan is at the top of the list for me 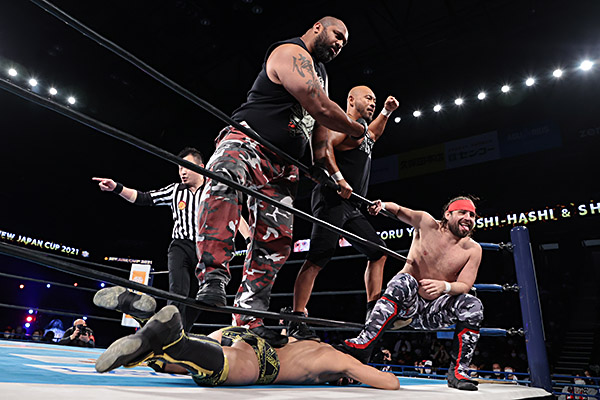 –Fale, we haven’t seen you since much earlier in the year.

Fale: Unfortunately with COVID, New Zealand is one of the toughest places to visit, or leave. It’s been a real mission to get back to Japan, but I’ve been working very closely with the New Zealand Dojo here.

–You’re actually part of a documentary series on the NZ Dojo coming up on NJPW World soon, correct?

Fale: It’s a very interesting series. You’re going to get a unique look at a place that isn’t like most schools. It takes the New Japan style of training and combines with foreign teaching. So there’s been a lot of recruiting and training for the Dojo.

–Chase, you finished the G1 and then went back to the US for a week? Less than that, even?

Chase: Yeah, I was in Japan from July 9 through October 22, went home for five days, so not even a week, but I’m feeling good.

–One disappointment about you being in the G1 is that you were unable to be a part of NJPW STRONG’s Autumn Attack series in Texas, and as a result, were not able to defend the Texas Heavyweight Championship. Are there any defences on the agenda, perhaps on STRONG?

Chase: Well, this title, as you know can only be defended in Texas, and I’ve spent most of my time in Japan. All those people complain ‘he’s not defending the title’, but it’s because I’m in Japan. New Japan is my top priority, and Japan is at the top of the list for me, and then STRONG? Maybe, in the future.

We should change his name to Ace Owens 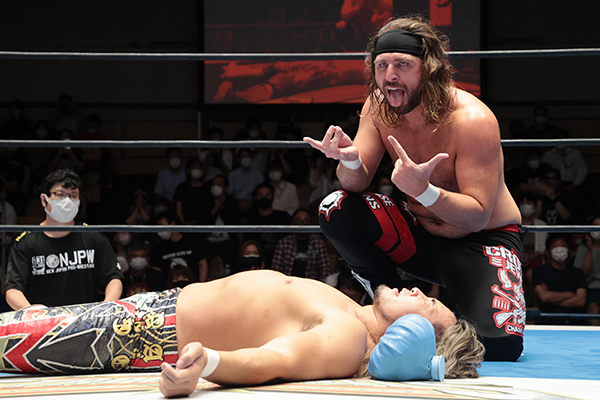 –Losing record aside, it was an impressive G1 for you.

Chase: I think it exceeded what people were expecting. From here on out, Tag League is going to be a little bit different than before, I think.

–Fale, what did you think of Chase’s efforts in the G1?

–Obviously the biggest win for you Chase was over Hiroshi Tanahashi in Korakuen. Fale, you’ve been a thorn in Tanahashi’s side over the years, was it satisfying to see Chase pick up the win?

Fale: Tanahashi is a formidable force, and Chase showed the fans and the company that he can beat the best. We should change his name to Ace Owens now, instead of Chase Owens.

Chase: Maybe we could just change the spelling. Like ChACE Owens.

In the ring, it’s a completely different story 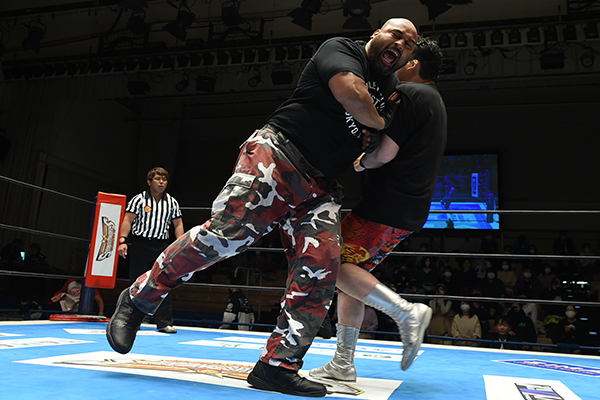 –You’ve been wrestling mainly as a singles wrestler this year, Chase. Is it difficult to change your mindset to tag teams again?

Chase: I’ve been wrestling in tags most of my time in New Japan, and I was trained by Ricky Morton and Bobby Eaton who are two of the best tag wrestlers of all time. So, no, I think if it was the other way around, going from World Tag to the G1, it might be tougher, but I’m confident and this is my wheelhouse.

–For you Fale, it’s been quite a long time since you’ve been competing, even though you’ve been hard at work in the Dojo. How have you been preparing for WTL?

Fale: People don’t realise unless you’re a wrestler yourself. No matter how much you train outside the ring, it’s when you’re in there that really matters.

Fale: You can train for six months outside of the ring, but when you’re in there it’s a completely different story. There is a little added pressure, but nothing we can’t handle.

Let’s get rid of Yano once and for all 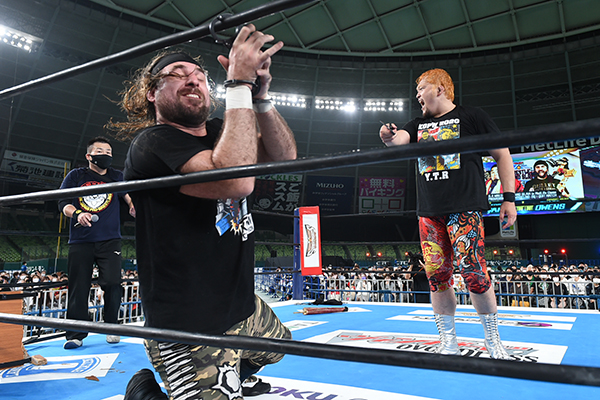 –Let’s have a look at some of the teams you’ll be facing in the tournament. You both have a lot of history with Hiroshi Tanahashi and with Toru Yano. That’s an interesting combination…

Fale: ‘Interesting’ is one way of putting it.

–Some fans online called them ‘Ace and Joker’.

Chase: That’s a perfect team name. That joker Yano. Fale, what do you say we get rid of Yano once and for all?

Chase: All to Yano.

I know where I want to be, and all my thoughts are on BULLET CLUB 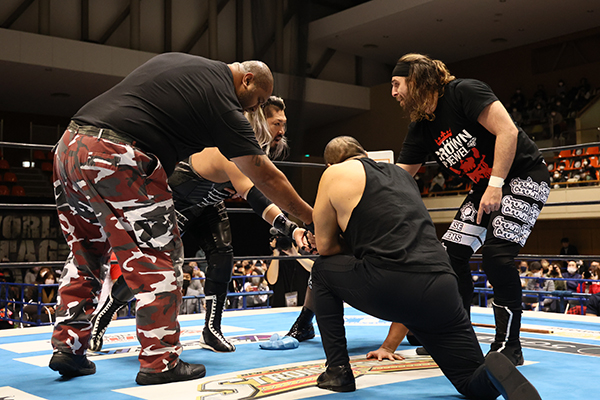 –With three BULLET CLUB teams in the league people will be looking closely at the BULLET CLUB derbies on this calendar. On November 19 you face EVIL and Yujiro Takahashi (interview conducted before World Tag League). Fale, as a BULLET CLUB OG, what are your thoughts on the HOUSE OF TORTURE?

–Chase, your interactions with EVIL in the G1 were far from sporting.

Chase: During the G1, all the BULLET CLUB vs BULLET CLUB matches were more serious than in the past. We all wanted to prove ourselves, or certainly I wanted to prove myself. I thought we had the understanding of ‘OK, let’s compete’, but apparently EVIL didn’t get that memo. I think we have to keep our eyes open and approach this match a little differently.

Tama elevated himself to the next level 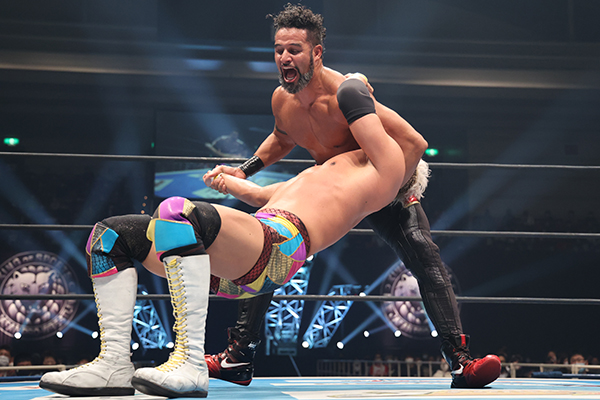 –Towards the end of the campaign you face Guerrillas of Destiny. Much like yourself, Chase, Tama Tonga and Tanga Loa also had to prove themselves in the G1 and were very impressive.

Chase: You always want to face the best teams, that’s how you get better. You face the best guys. G.o.D has proven year after year that they’re the best tag team. Tama got the better of me in G1, but we’ll see what happens.

–Fale, it must have been good for you to see Tama through his win over Kazuchika Okada in the G1 and then that very hard fought challenge at Power Struggle.

Fale: It was awesome. I felt I was finally seeing my brothers move ahead and get to where they wanted to be and deserved to be. Tama elevated himself to the next level. It feels like years of struggle paid off for him. 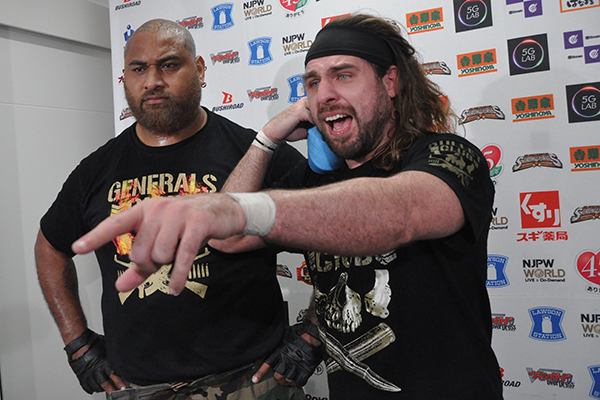 –The tournament ends on December 15 in Ryogoku, with the top two teams facing off. Who would you like to face in that situation?

Chase: I think an all BULLET CLUB final would mean whatever the outcome, we would be on top.

Fale: Yeah, I agree with that.

–There are three nights of Wrestle Kingdom this year with January 4 & 5 in the Tokyo Dome before the third night in Yokohama Arena. You could have other opportunities as well as at the IWGP Tag Team Champions.

Chase: Well first of all, I already beat Taichi in the G1. So even if we don’t win World Tag League-

Fale: And we will.

Chase And we will, but even if we don’t, we deserve tag title shots anyway. Plus I beat the US Champion Tanahashi before he lost the title to KENTA, so we’ll see where that goes. But if those aren’t an option, Yano is always on the list.

Fale: Chase has already had the chance to be KOPW Champion, so I would love to give it another go in 2022. That’s my goal.