April in japan means NJPW in Ryogoku, and a huge card to celebrate spring. With six championship matches on a stacked event, Hyper Battle ’22 is set to be an unmissable evening, live in English on NJPW World! 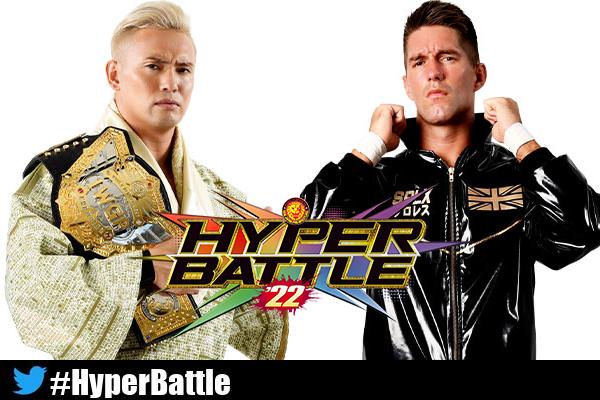 Sabre’s sole singles victory over Okada comes not in NJPW, but at home in the UK for RevPro. In Ryogoku Sumo Hall especially, the sight of so many commanding performances for the Rainmaker, ZSJ will be wrestling an away game without doubt, and against the very toughest of opponents. In 2018, the Submission Master turned the heads of many as he came achingly close to besting Okada, only to fall to a Rainmaker, but after the last three New Japan Cup winners have each converted the trophy win into heavyweight title success, there are tantalizing possibilities at play for Sabre.

Four years more mature than in his first championship challenge, and three years more advanced since they last met in the 2019 G1 Climax, Zack Sabre Jr. is better than he ever has been, and will bring a perfect gameplan to the champion on April 9. Yet so many have wrestled perfect matches with Okada only to fall at the champion’s feet. Could Sabre shock the world at Hyper Battle? 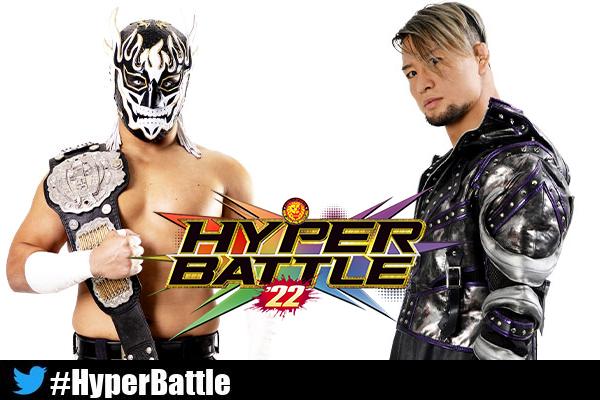 SHO makes his second career challenge for the IWGP Junior Heavyweight Championship when he faces El Desperado in Ryogoku. The bout comes after over a month of violent attacks on the champion; when the petulant SHO did not get his championship opportunity right away, matters would only escalate to the point of deeply personal assaults. At the New Japan Cup final in Osaka on March 27, SHO attacked Desperado from behind on his entrance with a wrench to the jaw, before ripping the champion’s mask off his face.

Desperado is often one to criticise a lack of fire on the part of his challengers, but certainly can’t say as much here in this affair. Instead, the champion will be as angry as we’ve ever seen him in this third defence of his gold. On an even playing field, Desperado is just as willing as SHO to bend the rules to earn victory, and can certainly give as good as he gets from the HOUSE OF TORTURE member, but can he keep up with a numbers game and the sheer volume of dirty tactics his challenger will bring? Or is the junior heavyweight title yet more gold heading to H.o.T? 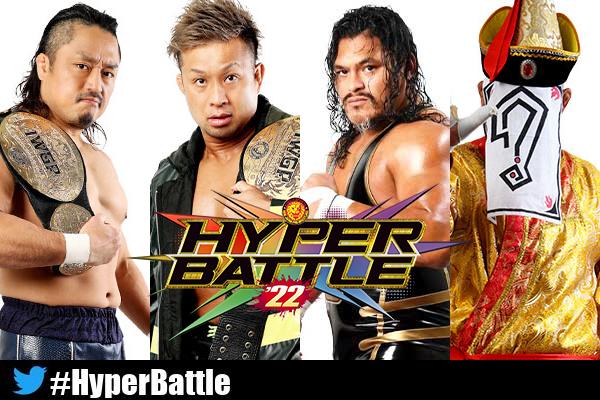 When Jeff Cobb and Great-O-Khan first formed a tag team combination during World tag League 2020, many speculated that it was only a matter of time before they held tag gold. April 9 sees them get their first chance at the titles after less than two years as a team, as they try to redeem one of few losses in their debut WTL campaign against the current tag champions Hirooki Goto and YOSHI-HASHI.

Despite knowing first hand the tag team prowess of Goto and YOSHI-HASHI, Jeff Cobb and Great-O-Khan have played a game of humiliation on the way to this title challenge. When making fun of their team name and engaging in a war of words didn’t get their shot though, things turned physical on March 27 at the New Japan Cup final. A crushing Eliminator from O-Khan to Goto saw the challengers stand tall over the fallen champions; with the mind games now played, this is going to be a very physica championship clash. 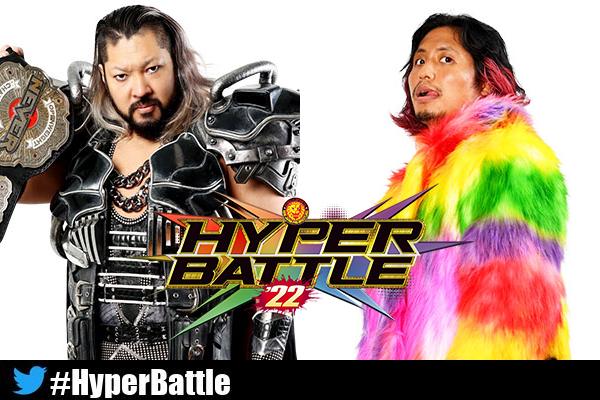 Former Los Ingobernables De Japon teammates collide in the fifth match of the night, as Hiromu Takahashi collides with one time close friend EVIL. Two years ago, EVIL followed his New Japan Cup win with a betrayal of Los Ingobernables De Japon, and the assistance of Dick Togo en route to the IWGP Heavyweight and Intercontinental Championships. Then the enraged Hiromu was fast to take on the King of Darkness only to fall at Sengoku Lord.

When the two met in the New Japan Cup third round, Hiromu was less emotionally fragile, and stronger willed to show the power of the junior heavyweights, and of his own persistence. Having endured Minoru Suzuki’s punishment, the Time Bomb withstood both EVIL’s power and Dick Togo’s interference, felling the King of Darkness with his own move.

EVIL would respond in cowardly fashion, Dick Togo choking Hiromu out from behind in Osaka Jo Hall on March 26. Yet less than 24 hours later, Hiromu had the best of him yet again, wiping Togo out with the EVIL STO variant, and declaring that rather than challenge for the NEVER Openweight Championship, he wanted EVIL to request an attempt at revenge. Will EVIL be granted his wish, or will Hiromu once again eat his lunch; and take his title? 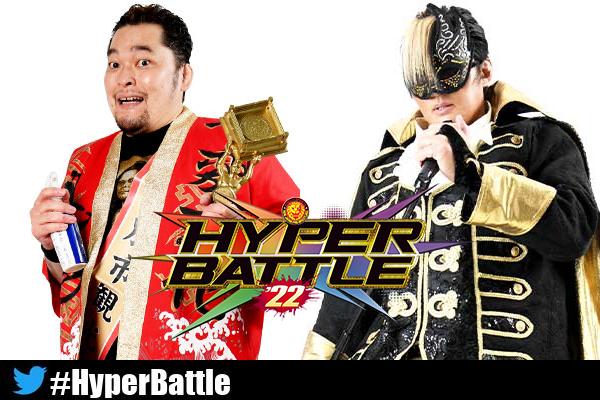 TORU YANO’s RULES: Cherry Blossom Party Match- both competitors must drink sake at 2 minute intervals, and return to the ring within a 20 count. Victory comes via pinfall, submission, or intoxification.

TAICHI’s RULES: No-Rope Ring-Out Match- Victory comes from knocking your opponent out of the ring.

Ever since Taichi knocked Toru Yano out of the New Japan Cup with a Yokozuna Elbow, the KOPW 2022 holder has been trying to get something back on the Holy Emperor. Often times this hasd involved mocking the grand sport, and Taichi’s hobby, of sumo, suggesting the two have a sumo match on several occasions. While Taichi has too much respect for the traditions of sumo, he has suggested that their meeting in Sumo Hall come with sumo-esque rules. With no ropes on the ring, the winner must force their opponent out to the floor.

Meanwhile, the ever resourceful and opportunistic Yano spotted a chance while opposite the Holy Emperor and Yoshinobu Kanemaru to call back to his KOPW 2021 win over the Heel Master. Dousing Taichi in whiskey saw the former tag team champion very much the worse for wear; now Yano seeks to use similar rules to his Christmas Eve trophy win at Hyper Battle. Which match wins the polls? Who wins the trophy? We find out April 9. 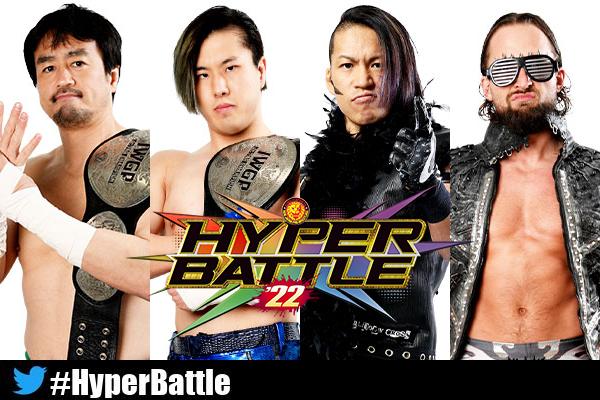 It’s been a long journey to BULLET CLUB’s Cutest’s challenge for the IWGP Jr. tag titles. They were originally slated to challenge then champions Flying Tiger at New Year’s Golden Series, but the bout got turned into a four way that saw Six or Nine leave as the 69th champions. Ever since, the angry Ishimori and Phantasmo have made a point to hurt and humiliate the champs, and when Guerrillas of Destiny were expelled from BULLET CLUB, they even got added to the mix. Now though, it’s a straight tag team bout with the belts at stake. Can Six or Nine continue to improve to rack up a successful defence, or will reign 69 quickly give way to 70? 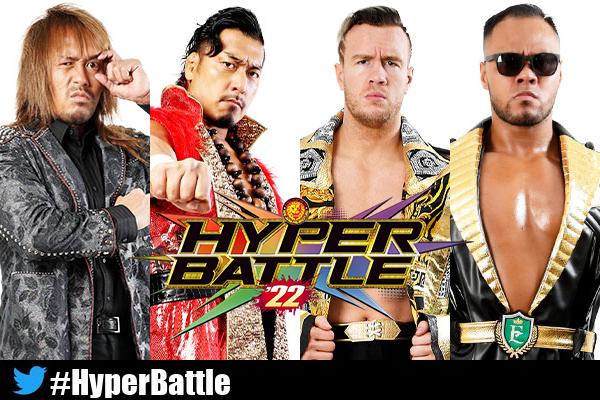 It’s testament to how heavily loaded the Hyper Battle card is that this all star tag is only the second match of the evening. Tetsuya Naito and Shingo Takagi form the kind of powerful combination that could have Aaron Henare and Will Ospreay worried, but the lingering question will be just what is next for the LIJ duo. As Ospreay is one week away from facing Jon Moxley in Chicago, and Henare’s plans will also be on dominating in the United States through April, Naito and Takagi’s New Japan Cup exits will leave them looking for a new direction. We may get a hint as to just what that may be here in Ryogoku. 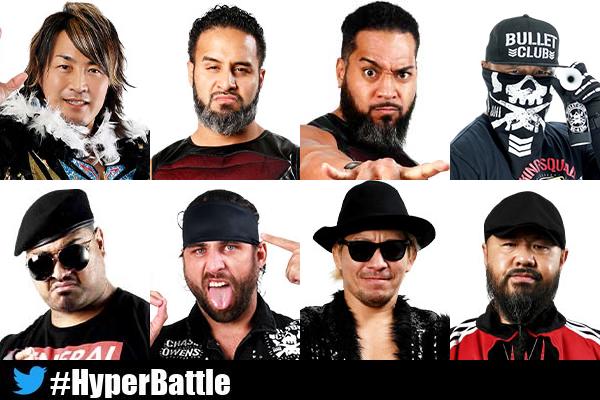 Eight man action will get Hyper Battle started in Ryogoku. Since a loose alliance was formed for Guerrillas of Destny and Hontai, it hasn’t been the smoothest of traditional periods. G.o.D haven’t won a match since their expulsion from BULLET CLUB, and frustration has been steadily mounting as BULLET CLUB remain a step ahead. Is Ryogoku the scene of a much needed turning point?