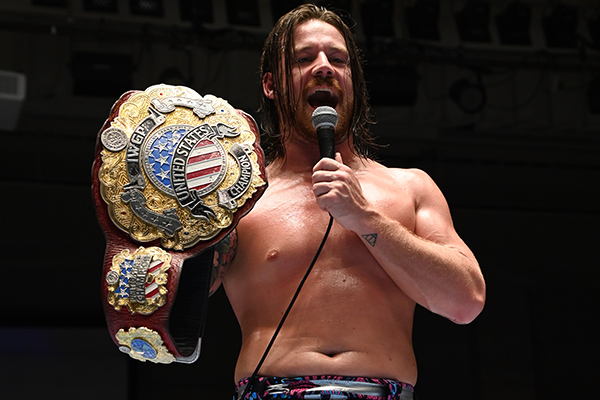 G1 Climax 32 saw its first of two nights in Korakuen on July 26. It was a night notable for the last remaining competitors at no matches wrestled to finally stand at the start line, while the main event saw its victor stand at the figurative start line of a new career chapter.
Watch the replay now! 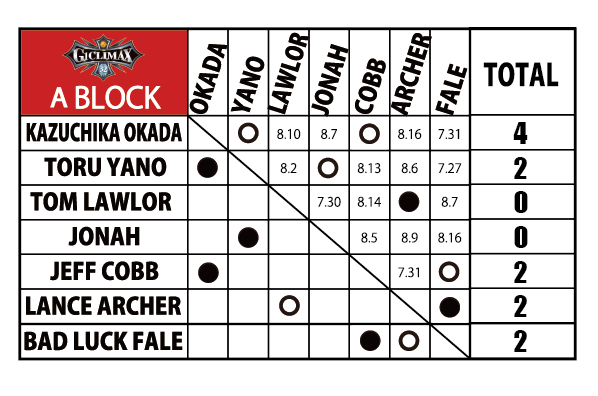 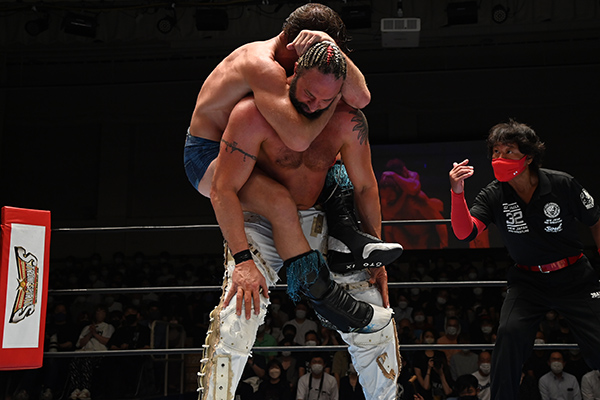 A Block saw Tom Lawlor make his G1 Climax tournament debut against Lance Archer. With a difficult task of chopping the giant Archer down to size, Lawlor had a difficult time, and Archer took firm control of the match as he toyed with the smaller grappler. Yet Lawlor was able to use his considerable experience and skill to take Lawlor down to the mat, threatening with a cross arm breaker, and with repeated dogged attempts at a rear naked choke that significantly slowed the big man. 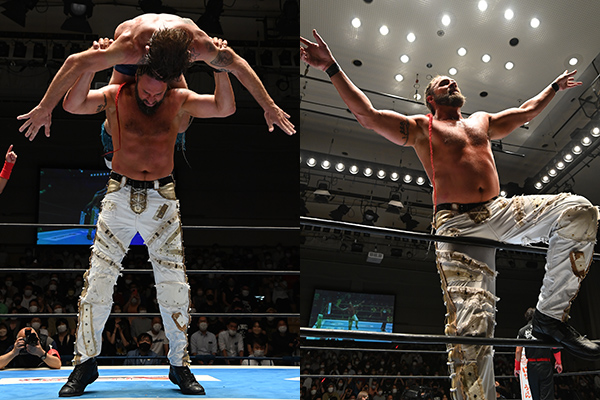 Yet even as Lawlor was trying to stick and move against the Murderhawk Monster, his ego got in his way. Burying knees from a cravats in the ropes, Lawlor had the advantage but paused to pose with Royce Isaacs, a mistake that led to a lethal choke slam all the way to the floor through his partner. In the end, dogged and determined though Lawlor was, there was too much Archer and as the former STRONG champion ascended the turnbuckles for extra leverage on a choke, he was met with a big knee and then the Blackout. Archer joined a crowd at two points in A block while Okada leads the way on a perfect four points. 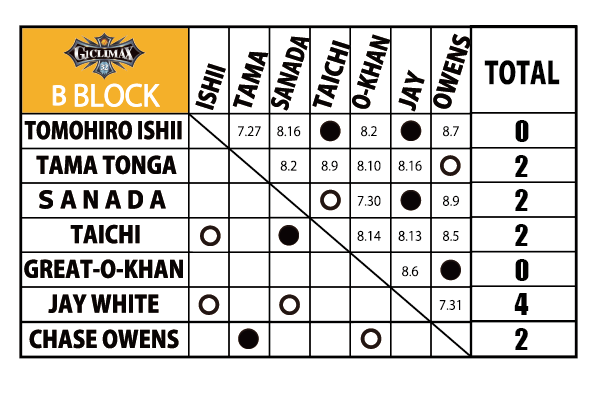 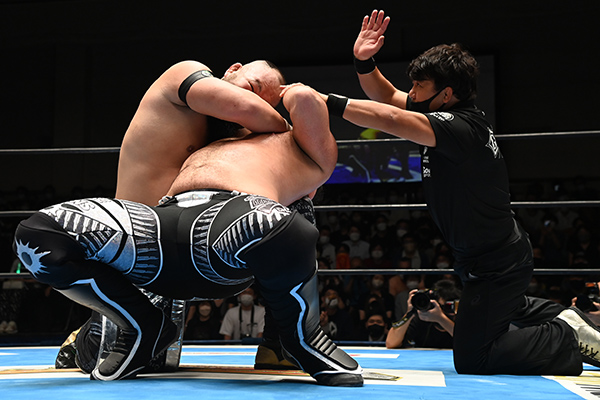 In B Block, Chase Owens recorded a shocking victory to bring himself up to two points at the expense of Great-O-Khan. After stealing a win from O-Khan with feet on the ropes at the end of their match in Washington this May, this time Owens started the bout in dirty form; a handful of powder to the eyes of O-Khan significantly slowed the United Empire member, who swung blindly as Owens took control.
Yet O-Khan was able to find his way back into the match, and fired off the Mongolian Chops that had missed so wildly early on. Owens would do all he could to steal one again, once more getting his feet up on the ropes but this time the referee stopped the moment of thievery; nonetheless Owens would take the win fairly and by force. 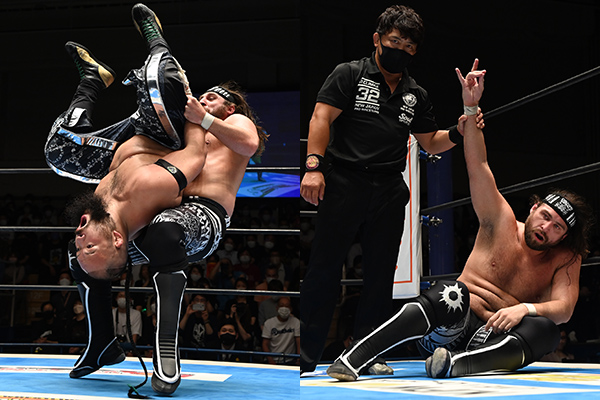 After O-Khan tortured Owens with the Sheep Killer hold, the Crown Jewel nonetheless escaped the Eliminator. When Chase looked to be in a precarious position on the apron, he turned the spot into an advantage, pulling O-Khan throat first into the top strand. As the Dominator recoiled, Owens had a clear shot with C Trigger, and followed with an emphatic Package Piledriver to join the two point mix, Jay White heading up the group at four as O-Khan slipped to the bottom. 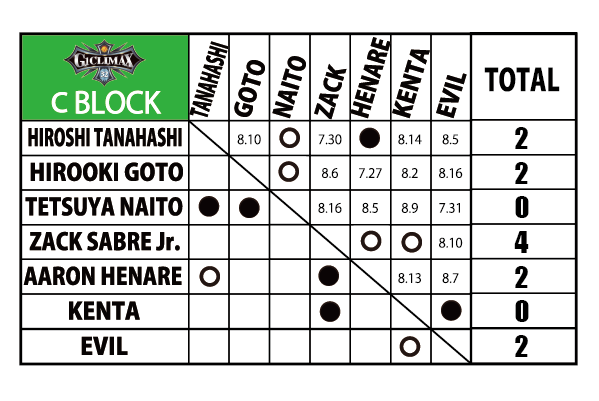 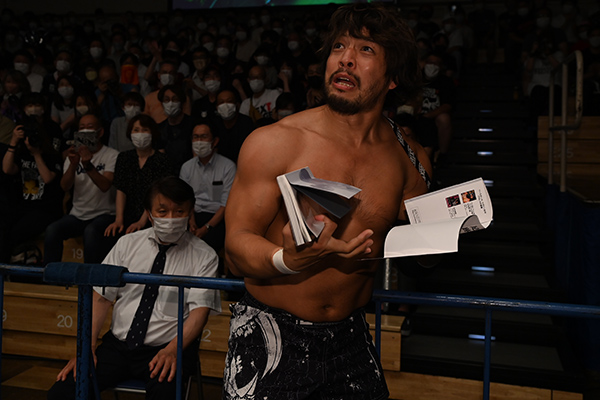 KENTA ended the night by joining Tetsuya Naito at the bottom of C Block. Views were split over whether KENTA’s match with EVIL was going to be packed with chicanery or evenly fought and violent, and the answer was a little something from both columns. 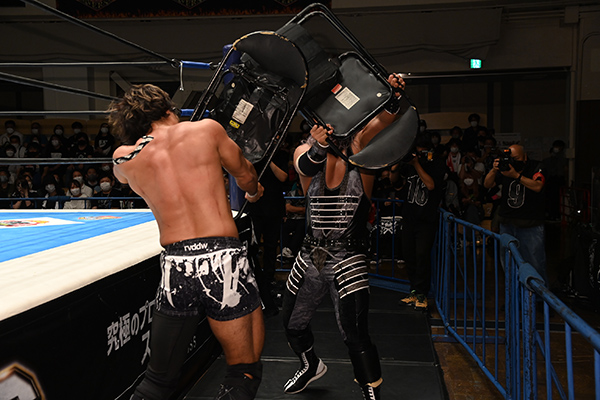 Classic skullduggery saw phony handshakes and fake offers of KENTA’s freshly published book in the early going, but as the referee was incapacitated, the match took a turn for the ugly. Steel chairs were brought out and EVIL was met with violent kicks and shots into the guardrails. Yet with the match in hand, the lights went out in Korakuen and came back with EVIL in control and Dick Togo nowhere to be seen. 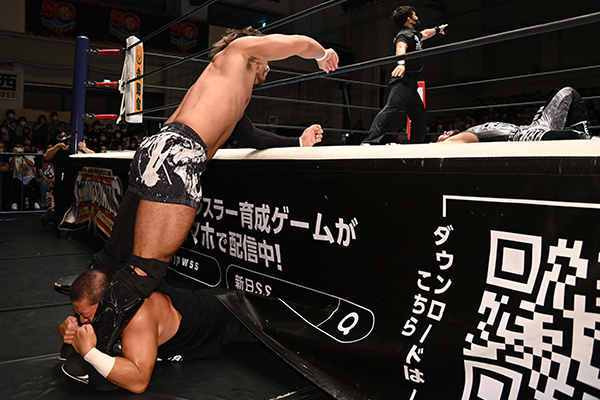 As KENTA continued to apply the advantage, the now recovered referee began to apply his 20 count. EVIL was brought inside, but as KENTA went to join him, Togo grabbed his feet from under the ring, and EVIL was victorious as the count reached 20. SHO was revealed as the man behind the light switch as KENTA resentfully took the loss in exchange for some book promotion; nonetheless he is last in a group that saw EVIL move up to a tie for second with Hirooki Goto and Zack Sabre Jr remaining in charge on four points. 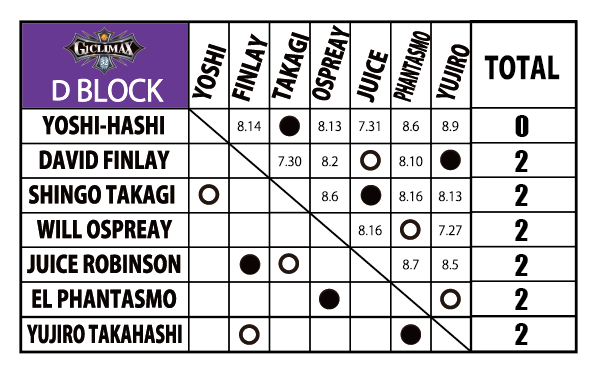 The main event though was a wild, violent and deeply personal clash between David Finlay and Juice Robinson. A proficient grappler, Finlay sent Robinson stumbling early with take downs and a dropkick, but Juice was quick to target Finlay’s weakened left shoulder, and that was where he stayed on painful offense. 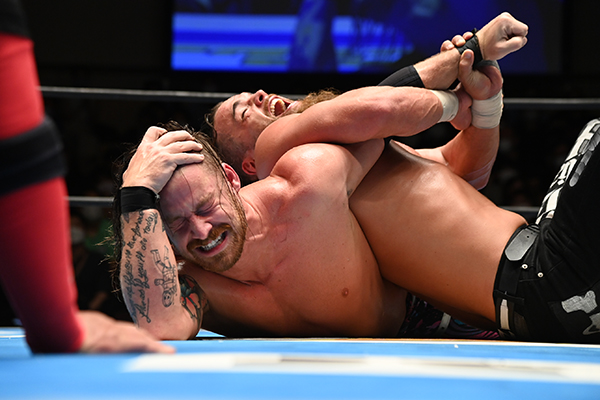 Finlay’s comebacks were brief and fleeting in the face of a cruel and relentless Robinson. Juice wanted to deliver a Piledriver on the hardwood floor of Korakuen, but Finlay was able to backdrop out of the move, and turned the tables in violent fashion. As Juice begged off, Finlay targeted the once broken left hand of his opponent, but Juice loosened a corner pad to send Finlay shoulder first directly into the ring post. As Finlay’s shoulder gave out on a sunset flip powerbomb, Juice forewent his left hand knockout blow to connect with the right and then Juicebox for two, a superplex soon following. 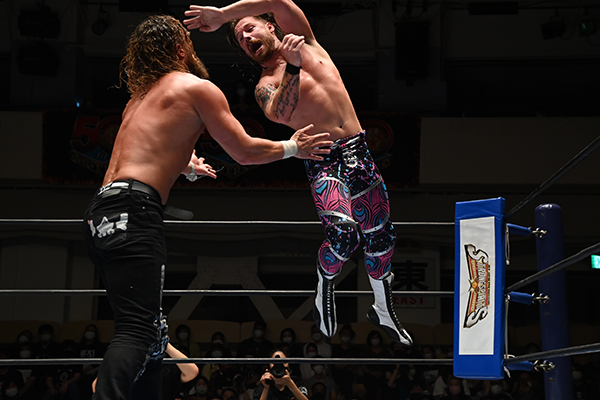 Finlay countered a follow up suplex with Trash Panda but couldn’t get a cover before Juice rolled out the ring. Robinson would land his left hand and the Pulp Friction back inside but Finlay incredibly kicked out; as the adrenaline flowed for Finlay, a Prima Nocta and Acid Drop followed but this time Juice had his foot on the bottom rope. 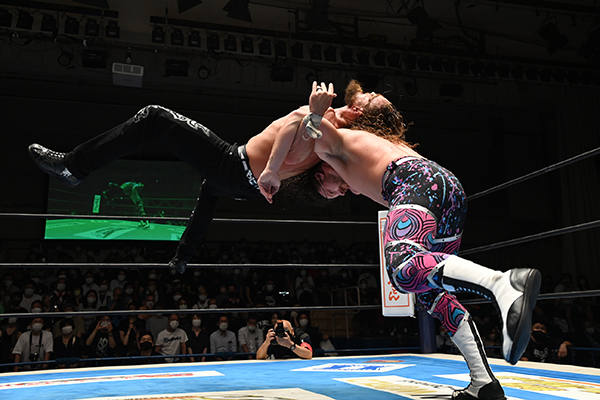 It seemed as if bad luck and Juice’s situational awareness may have broken Finlay, who took Juice to the floor but was met with a right hand out of midair on a plancha. A Piledriver on the floor followed, and the Rockslide was academic, but the unconscious Finlay was over rotated and pin balled into the referee. Juice went to strike Finlay with the US title belt, but the Rebel ducked and grabbed his shillelagh; Robinson blocked one shot with the belt but not a second, and not the Trash Panda that got three. 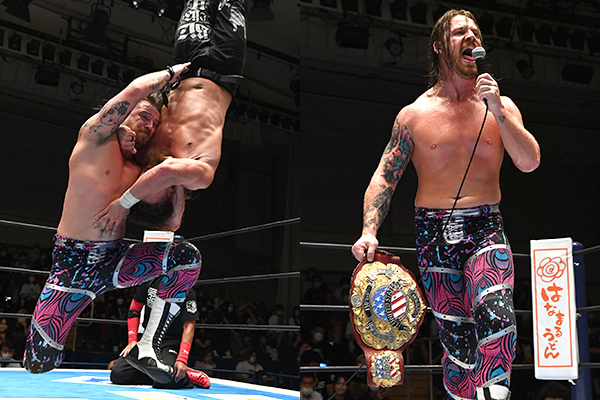 After the match Finlay took hold of the US title and made it clear that rightful holder Will Ospreay could have it but only if he beat Finlay first. The triumphant fourth generation wrestler now sits at two points with the bulk of D block, but with future brighter than ever.
G1 action continues Wednesday in Korakuen with Toru Yano facing Bad Luck Fale in A Block, Tomohiro Ishii facing Tama Tonga in B, Aaron Henare meeting Hiroko Goto in C Block and Will Ospreay vs Yujiro Takahashi in D.
NEXT：G1 Climax 32 night...