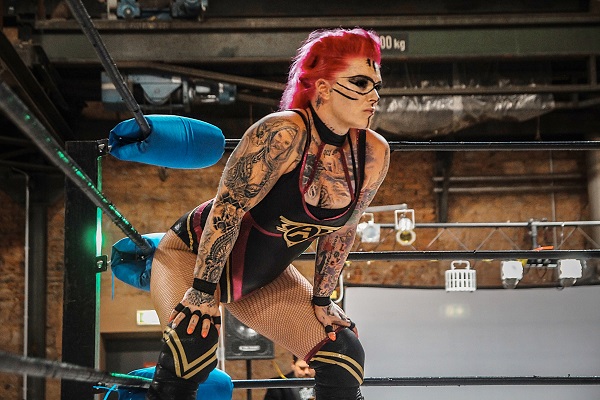 Royal Quest II sees NJPW hit London for the first time in three years on October 1 and 2, and along with it, history made. The very first match in a tournament to determine the inaugural IWGP Women’s Champion will see Britain’s Ava White take on Germany’s Jazzy Gabert, with the tournament finals slated for November 20 in Ariake Coliseum at Historic X-Over. Before she embarked on Royal Quest II, we sat down with former World of STARDOM Champion Gabert for her thoughts on the title, plans for Japan, and ties to IWGP and NJPW history.

I know what this means, so I’ll put all my heart into it 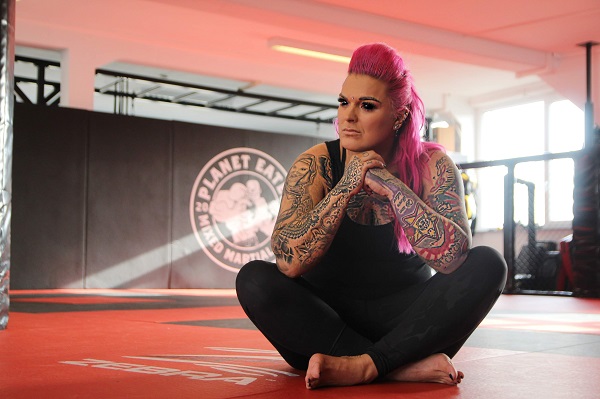 –As we speak, we’re a couple of weeks away from Royal Quest II, and the IWGP Women’s Championship match with Ava White. NJPW has had women’s matches before from STARDOM, but this is the first time it’s happening on an international event. How are you feeling heading into London?

Jazzy: Super excited. The call from STARDOM came as a surprise to me at first, but I guess it’s only right that they should call a former World of STARDOM Champion! Seriously it’s a huge honour. I’m nervous, but I’m definitely excited, and I know what this means, so I’ll put all my heart into it.

–How have you been preparing for this match in London, and potentially moving onto the second round in Japan?

Jazzy: Well, I haven’t been wrestling as actively myself since the pandemic started, but I have been training and coaching younger wrestlers in the training center we have nearby. So I’ve always been used to the pushups, the squats and the endurance, but it had been a little while since I was in full-on training mode.

–So you’ve been getting back into the more physical side of things.

Jazzy: I’ve been torturing these kids for so long, and then it became my turn to show I could stay with them (laughs). It was the first time in a while I did a lot of full  contact stuff like that and there was definitely pain there that I hadn’t felt in a long while, but it’s a good kind of pain. It seems weird but I kind of enjoyed it.

I always wanted to work in NJPW 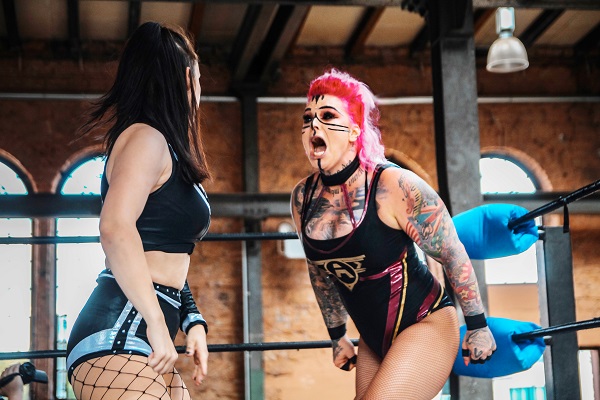 –Obviously having the IWGP Women’s Championship is a big historic step. What was your first reaction to the news of NJPW and STARDOM crossing over, and the announcement of the new championship?

Jazzy: I was so happy for everyone when I heard the news. You know I lived in Japan for four, five years and saw the hard work that all the STARDOM girls especially put in. There’s a lot of blood sweat and tears everyone has put in and I remember thinking when I was there that I wished these women had a bigger platform and a bigger spotlight on them. With this title, they do get that.

–What do you expect will be the impression NJPW fans watching STARDOM, or yourself for the first time will come away with?

Jazzy: I think a lot of fans will come away knowing the girls are just as good as the boys and maybe better. I always wanted to work in NJPW actually. I always had my eyes on it, and once my stepfather…

Jazzy: He wrestled Joanie Laurer, Chyna, in the Tokyo Dome. I watched that match a million times, and I had wishful thinking that maybe they could do something like that one more time, and I could show what I can do, and women can do in general. So yeah, I was really happy to hear the news.

–The Japanese scene has traditionally been one of separate promotions for women and men, while internationally things tend to be more mixed. Both have their own benefits as platforms, and you’ve experienced both. What do you think of the crossover between NJPW and STARDOM, and what might come in the future?

Jazzy: Being in Europe, I’m really right in the middle of the Japanese and the American mindsets. I love the Japanese way of doing things, love the way they train, and I love they have all women shows and all men shows, but at the same time I think they should be able to mix it together. It’s like in the ring, in Japan you’re often focusing only on your opponent, but I like the showmanship and entertainment factor that comes with a more American approach. So I think why not have both?

Chono and I have a special bond 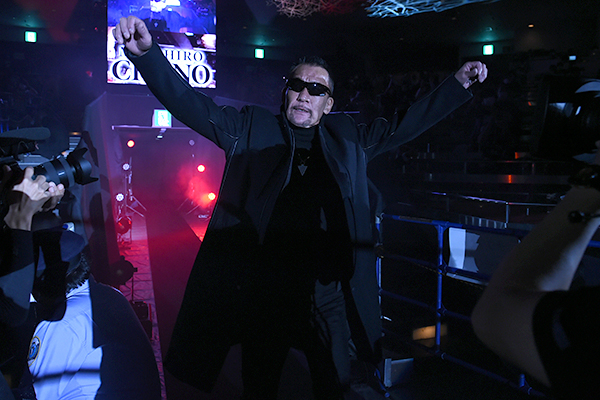 –As we’re talking, we don’t know who else will join the IWGP Women’s Championship tournament, but you do have perhaps the closest link to IWGP lineage in the form of Masahiro Chono. Just how did you come to be a part of the Chono family?

Jazzy: It’s wild. I was in Japan doing my thing, and all of a sudden (STARDOM Executive Producer) Rossy Ogawa called me and said ‘Masahiro Chono wants to meet you,’ which took me aback. I went to the office and there were all these reporters there, it was a very formal thing and I didn’t know what was going on. Then after everyone left, his wife came, and we talked in German and ever since they made me a part of the family. We write every day, we visit at Christmas, everything.

–So has Chono given you any insight, any advice?

Jazzy: Oh yeah, absolutely. Like when I wrestled in the Mae Young Classic in WWE, I called him and asked him ‘I really want to make a good first impression, what do I do?’. He gave me the most amazing advice I would have never thought of. How to move in the ring, how to present myself, everything. It turned out that match (with Abbey Laith/Kimber Lee) was something I was really proud of. Then when I found out I would be in this IWGP tournament, I called him and he was so happy for me. So he’s been following my career all the way, and I’ve been watching his matches and sometimes we watch things together, analyze stuff. We have a special bond, I feel.

Jazzy: (laughs) No, unfortunately not. It’s an English Japanese mix, I speak a little Japanese. We speak more with our hands and feet (laughs).

–The language of pro-wrestling (laughs).

You feel the passion with these women 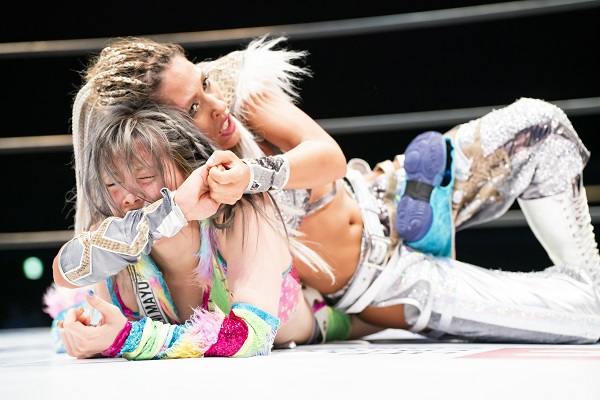 –Let’s talk a bit about STARDOM in particular. You were the second World of STARDOM Champion, and now you have the potential to be back after six years away. Have you been keeping track of them and their growth over the last couple of years.

Jazzy: Yeah. I always keep track of what they’re doing, who their champions are. I’m a promoter now in Germany as well; my dream is to have the STARDOM girls to Germany, so I’m keeping a close eye on them.

–Who catches your eye in particular?

Jazzy: Well, I was really happy to see the girls that were away for a while come back, like Hazuki, and the little one… the bear… Koguma! I love to see them back, as well as the old school people who were there. Everything has really evolved, and it’s great to see them get more attention. It’s maybe a different style there to when Nanae Takahashi and I kicked the hell out of one another, but it’s still super interesting.

–And Nanae returned to STARDOM as well recently. If you could promote a big match for STARDOM wrestlers, who would you like to see in the ring against one another?

Jazzy: I’m a real fan of Giulia’s, and I’d love to see her and Utami Hayashishita. Starlight Kid is impressive…and Mayu (Iwatani) of course! She’s still there! I remember seeing her when she was all banged up backstage in those earlier years and she’s still going, not slowing down but crazy as she ever was. I love the dedication and the passion. That’s what Nanae would always talk about, the passion. You feel that in these women and that’s what keeps me going as well.

–If you are to advance past Ava White in London, you would then move on to the semifinals, and then the tournament finals in Ariake Coliseum, with the first defence of the IWGP Women’s Championship already lined up for Wrestle Kingdom 17 in the Tokyo Dome on January 4 2023. Are you taking one thing at a time, or do you have a bigger picture idea of Wrestle Kingdom?

Jazzy: I’ll say this- I crossed off all the dates on my calendar, assuming that I will win, and I’ll kick some more ass in Japan. Maybe the STARDOM women have seen my old matches, but I’m a new Alpha Female. For me career wise, I feel like this might be my last big run, and I’m going to throw all I have behind it.

Jazzy: I’m a big girl, I’m a strong girl, I’m hard hitting, and I’ll be putting every bit of my experience over the last 20 years, in pro-wrestling and MMA, into this. Ava White is still young and will have a lot to give to this business, but not in this match. This match belongs to the Alpha Female. 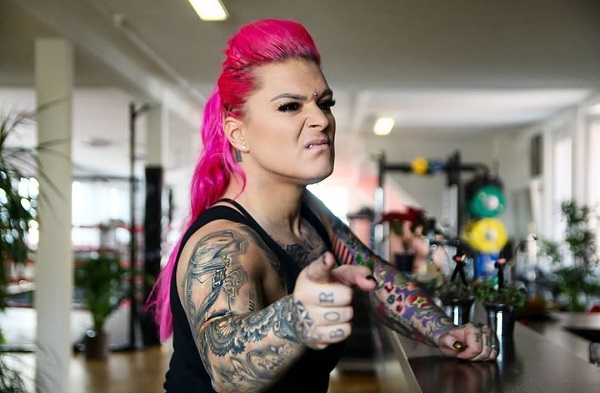