Not Lonely at the Top in Osaka Junior Tag Bouts

Three tied at ten, while half the league fall by the wayside

Osaka saw nine matches for a super card of Super Junior and World Tag League action on December 2, with the junior heavyweights rounding out the middle third of the campaign and heading for home.

The top match for the junior heavyweights of the evening saw Clark Connors and Ryusuke Taguchi take on TJP and Francesco Akira. Before taking some oinstant ramen and beer refreshments before the bell rang, Connors would set to work on the one time LA Dojo mentor TJP, showing his impressive power before bringing Taguchi in for effective rearward offense and misdirection that set up a massive double Jeep Flip. 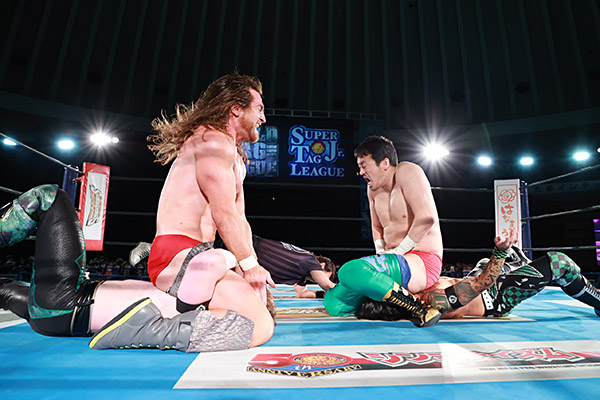 Catch 2/2 battled back as Akira flew with a plancha to Connors, while TJP stretched both the Wild Hips members at the same time. Despite Taguchi encouraging Connors to his corner with a can of beer, the Wild Rhino was all but caged until a spear out of the corner stopped TJP’s attempt at a Facewash. TJP’s backside and a double DDT prepared the king of butt style to drop trousers and land what could only be described as a Rock style People’s Ass; as Akira tried to save TJP, Connors would hit the ring, and soon both Connors and Taguchi were revealed to have matching underwear.

Red pants to a Rhino as rag to a bull, Connors fired up with Taguchi to land a Double Bummer Ye on TJP, but Akira made the save for the Public Enemy. As the match spilled further out of control, Catch 2/2 denied a Connors Trophy Kill, and struck with the Alley-Oop on Taguchi before the 2xt laid out Connors and brought the tag champions to the top of the table.

Two teams tied at eight points tied up when El Lindaman and Alex Zayne took to BUSHI and Titan of Los ingobernqables De Japon. The SAUCEHEARTS side would take the fight to Titan early with typical aplomb, but a flurry of strikes would see the tag to BUSHI, and the tide turned. As the match approached five minutes, Lindaman was in danger, but his judo background and a short DDT would be enough to bring Zayne in for an offensive flurry of his own that ended with a double somersault axe kick. 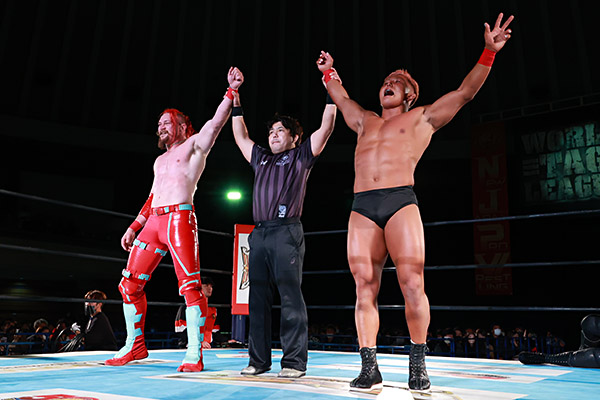 Titan would counter the Baja Blast and followed with a gorgeous assisted rope walk plancha onto the SAUCEHEARTS. Inside the ring however, Lindaman’s awareness paid off with expertly timed suplexes and then a tope con giro of his own to Titan. BUSHI was left alone center ring, and fell to the Taco Driver to bring Zayne and Lindaman to the top at ten points.

Robbie Eagles and Tiger Mask took to Ace Austin and Chris Bey in bad need of a win, but both members of Flying Tiger were grounded in the early going as Austin Bey tore at both Tiger’s mask, and the skin on his back. After a back heel trip and sole butt though, eagles would be inside, and rapid fire offense would put the Australian in the driver’s seat, a Pulse Drop ringing Bey off the mat and setting up a tag to the recovered Tiger. 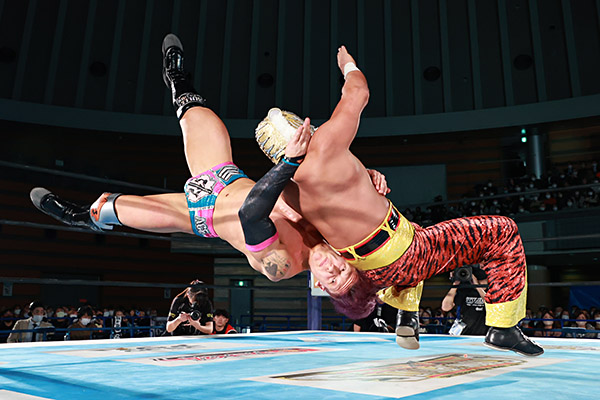 A top rope butterfly superplex was followed by a Tiger Driver for a nearfall on Bey, broken up by Austin; the veteran masked man wanted an assisted Tiger Suplex to follow, but a thrust kick assist from Eagles found his partner by mistake. Bey and Austin took advantage with the 1-2-Sweet assisted Art of the Finesse on the floor to Eagles leaving Tiger to fall to the Fold center ring moments later. 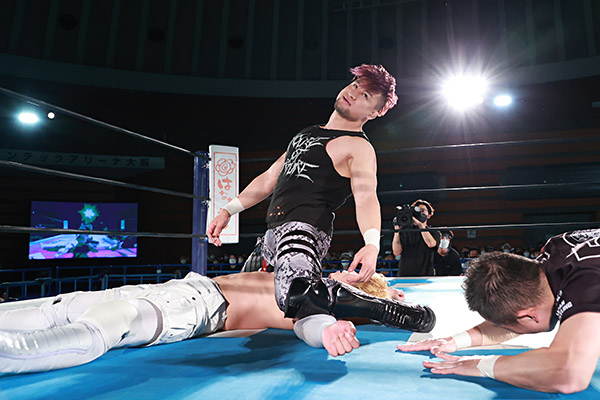 YOH headed into his match alongside Lio Rush having promised to lay out former partner SHO of HOUSE OF TORTURE with their old 3K move, and add a sixth loss to the SHO and Dick Togo ledger. After mid match interference consistently failed through the league to date, Yujiro Takahashi got himself involved in the CHAOS entrance to start the match, to little avail; Togo was planted with the 3K, but the referee had been taken out in the H.O.T melee, and Rush found himself on the wrong end of a wrench when he went to revive the official. A second referee would be dragged to the ring by EVIL, the bell finally ringing to start the match just in time to taste Shock Arrow. SHO pinned YOH in a mere 18 seconds officially on the clock to cast CHAOS’ tag league into doubt. 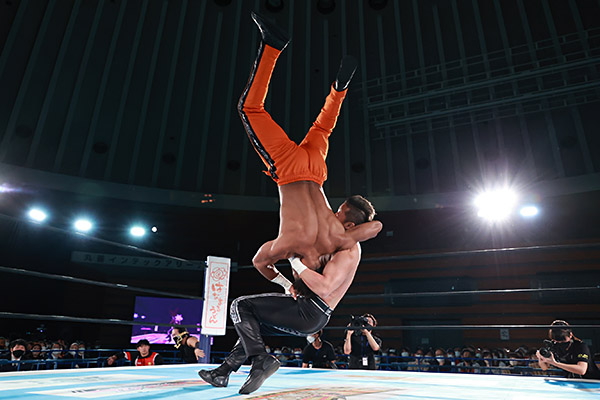 Kicking off the night were Kevin Knight and KUSHIDA, looking to get their second victory over the winless Yoshinobu Kanemaru and DOUKI. KUSHIDA, along with a more confident Knight in his new orange garb, worked seamlessly to control DOUKI early, but Suzuki-Gun would take over on the floor and the Timesplitter would have his leg worked over by the Suzuki-Gun side. After a midair collision for KUSHIDA and DOUKI, Knight came in with his ever spectacular vertical leaping offense, but came up with Kanemaru’s knees on a big splash, and was nearly pinned by a Kanemaru moonsault. Touch Out soon followed to give Suzuki-Gun the win.