Best of the Super Juniors Night 9 at a glance

Now at night nine, we’re past the midway point of the Best of the Super Juniors. Here is where every match seems even more important, as low point scorers fall by the wayside, and the top runners seek to book their place in the Ryogoku finals.

Here’s what we can expect from tonight’s ten tournament matches. 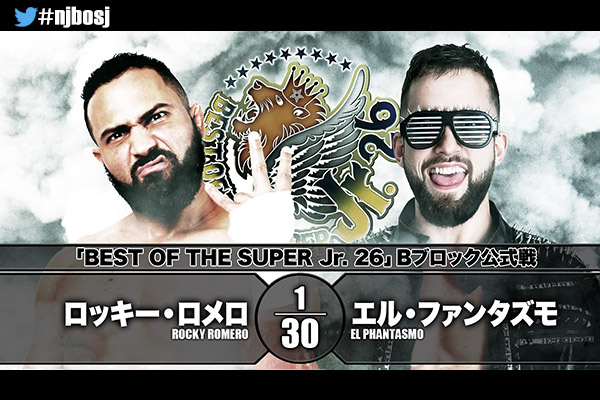 At the start of the tournament, most were passing over Rocky Romero as a serious contender. He’s spent the last week and a half proving the doubters wrong. Romero has become a contender for MVP of the tournament if not top points scorer, and has a lot of pride on the line against ELP.

Tonight, incredibly, marks Romero’s first singles main event since 2006, where he faced Koji Kanemoto as Black Tiger during BOSJ 13. After having already stolen shows on this tour, Romero is doubly eager to stand in the main event. He’s also eager to redress a poor win loss ratio and do what he needs to stay even barely mathematically alive. In this must win scenario, can Rocky make ELP walk the nakasuzo road? 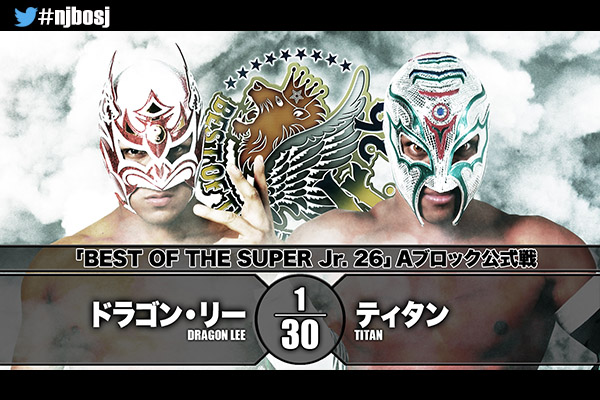 Had this bout between two CMLL stars taken place near the start of the tournament, we might have expected a friendly display between two proud lucha libre representatives, who have teamed together on more than one occasion, and would be eager to show just what kind of talent CMLL produces.

At this key stage of the BOSJ however, as we enter the back four league matches, this match may be a good deal more aggressive than some anticipated. Titan had a challenging first half of the tournament, putting him behind the 8 ball where it comes to reaching the finals in Sumo Hall June 5. For Dragon Lee, key losses to Taiji Ishimori and Shingo Takagi could easily see the IWGP Junior Heavyweight Champion miss out on Best of the Super Juniors glory, and even if he does win the tournament, there are individuals from the offset that are ready to issue challenges. One man must win, the other cannot lose, and this semi main event should be unmissable. 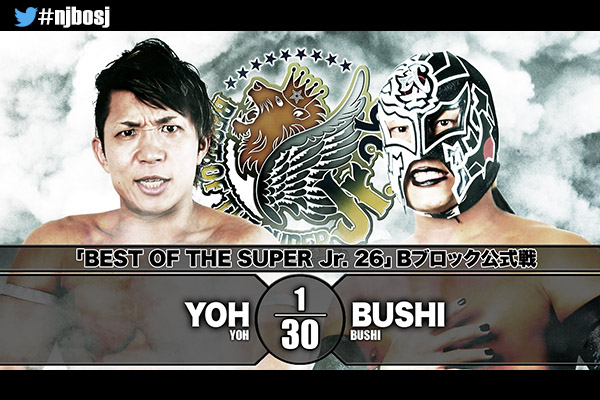 One thing we can definitely expect from this bout is that chops will certainly be on the menu. Just like SHO was obsessed with Shingo Takagi for months going into their opening night Best of the Super Juniors bout, so YOH has been in steady competition with BUSHI.

Much of this stems from October of 2017, when YOH and SHO found themselves in a Korakuen main event spot during the Super Junior Tag Tournament opposite BUSHI and then partner Hiromu Takahashi. Hiromu and BUSHI were eager to show Roppongi 3K that despite having returned to the New Japan roster and winning the IWGP Junior Tag Championships on their first night, they still had dues to pay. Those dues came in the form of chops that quickly lacerated YOH’s chest, and gave a lot for the young man to stew on.

YOH’s matured as a competitor since, and it felt good for he and SHO to pin BUSHI during the Dontaku tour to secure their first defence of the junior tag championships in three reigns. Now though, they’re in a singles environment, and with both men gathering momentum at the midway point of the tournament, neither will give an inch.

After a difficult start to Best of the Super Juniors, Jonathan Gresham is finally growing in confidence. His wins over TAKA Michinoku, Titan and Tiger Mask have managed to convince the American Octopus that he belongs in the tournament, and his self confidence is resulting in making his opponents wrestle his pace of match.

That could spell trouble for Taiji Ishimori, who is carrying neck issues and can ill afford being stretched too aggressively. At the same time, while many held Ishimori as a favourite going into BOSJ, he will be reeling and furious after suffering his first loss against a man in Kanemaru he’s never been able to beat. One slip could put Ishimori on the slope out, or it could make him react with incredible fury.

After his opening hot streak in the tournament come to a close in this year’s BOSJ, Taguchi’s spirits received a big boost with a win over Romero in the much vaunted Coach versus Coach battle last night. Now in unchallenged charge of the play book he needs to readjust his game plan, or maybe catch some sneaky style advice from new assistant head coach Rocky Romero as he takes on Bandido.

Bandido for his part could be working hurt after going through a war with Will Ospreay Thursday. Can this first time meeting be the chance for Taguchi to regain lost momentum? 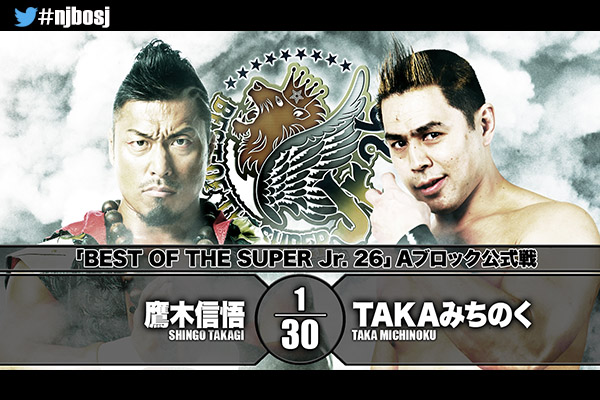 Yet it would be foolish to discount the wily Michinoku. Takagi has just emerged from a hard hitting war with Dragon Lee, and moreover did so still undefeated. Takagi has it all to lose, while Michinoku has so much to gain. As we saw when Kanemaru used devious countout tactics to score his first points in the tournament on Wednesday, sometimes it can only take a second to steal a win, and Takagi must be on his guard. 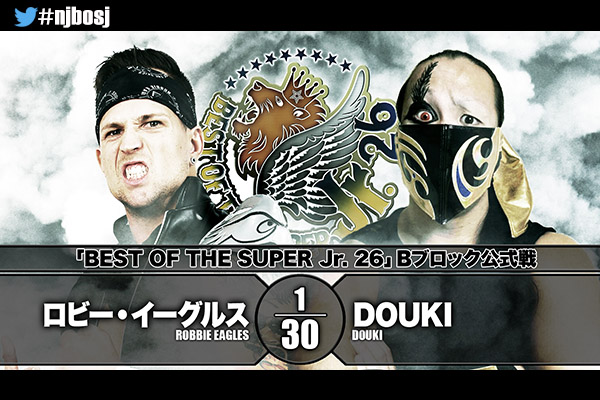 Robbie Eagles first tournament loss to El Phantasmo was a bitter one at the time; after all, Eagles was expecting gentlemanly and high spirited competition but got.. well, he got El Phantasmo. While Eagles cliams that all is well in the bullet club ranks after time to cool down, the fact that ELP now stands alone at the top of the table must stuck in Eagles’ talons somewhat. It was frustration at his position that saw him make a rare mistake opposite BUSHI, baited into his 450 splash by the masked man, and paying for his slipup with an MX and two more points denied. Perhaps we may see that frustration manifest again itself in this match with DOUKI, but straying away from his scientific game plan may be the worst thing for the Australian to do. With the wild and unpredictable DOUKI, escaping uninjured is as big a feat as escaping with two points. 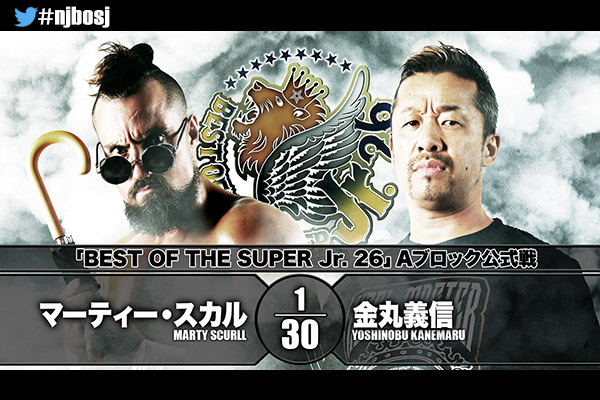 After well over two decades perfecting his craft, Yoshinobu Kanemaru has truly earned the nickname of ‘heel master’, and now finally tapping into his darkest of arts, has gained two victories in unconventional form over SHO and Ishimori. Scurll however has shown he’s every bit the villain Kanemaru is, and Brody King has taken increasingly more than just a watching brief during his matches as well.

There’s a certain glee to watching two dirty players battle to see who can wallow deeper in the grime. The question won’t be if rules will be broken but how many and starting when. 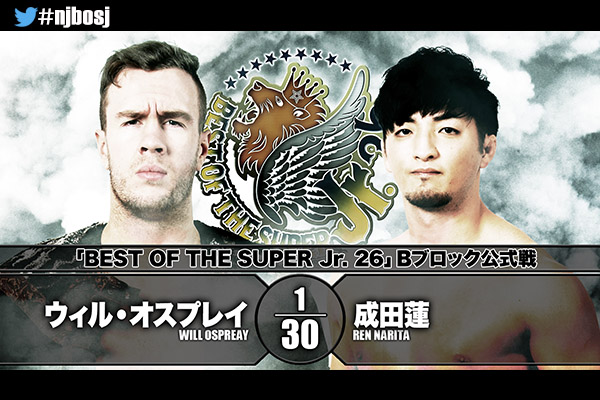 Poor Ren Narita. As clear an underdog as there could possibly be going into the BOSJ, he’s since gone into a fiercely difficult three day stretch in Korakuen. First he was against Bandido, where he managed to do a surprising amount of damage, but then to a ELP whose ego was badly swollen from defeating Ospreay; a man he faces tonight, and who will be in no mood to play nice bigger brother to Narita after falling to ELP and having a tough matchup with Bandido of his own, one he barely won.

Ospreay will likely leave with the points here, but how long can Narita last? 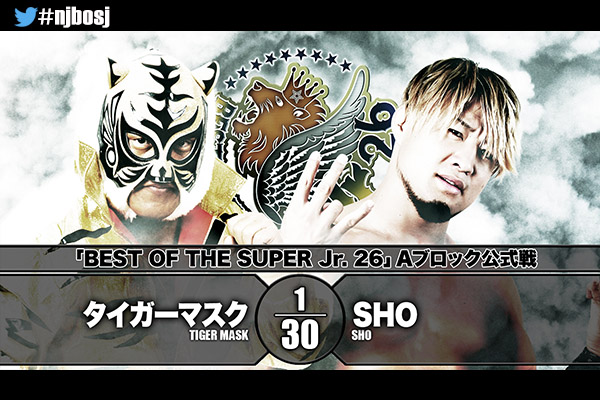 In the fiercely competitive environment of BOSJ, and particularly with two members of A Block still undefeated, every loss hurts. Three losses is agony, and SHO is smarting badly. A spot in the finals seems oh-so-very far away for SHO, who at this point needs to take each match as it comes. Coming up next is the chance for SHO to pay some receipts; against the rest of the field for his losses, but also against Tiger Mask himself. Just like with every generation of up and comers, Tiger worked closely with SHO during his time as a Young Lion. That time period is the origin of the two singles matches he and SHO have, and the SHOstealer could well be looking to release his frustration on the masked man, with memories of harsh dojo days fresh in his memory.