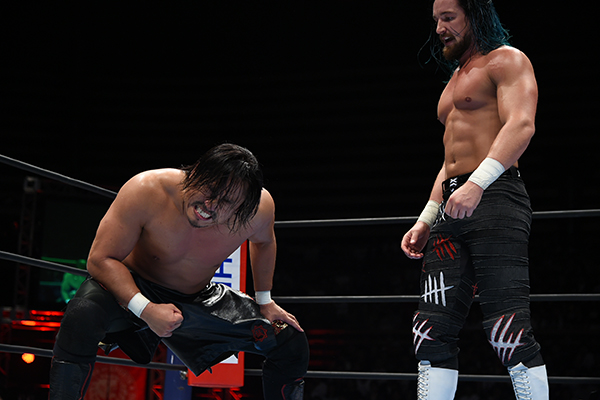 Returning to Japan after the kick-off night in Dallas, the G1 Climax began in earnest in the first of two nights in Ota, Tokyo. This time, the B Block had the chance to shine as the opening matches between the wrestlers got underway. 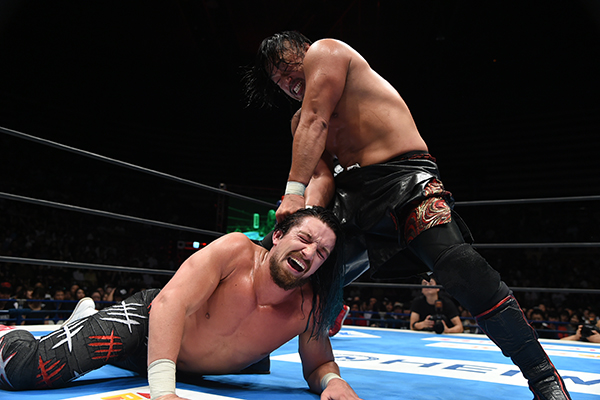 Goto came into the ring with a new sense of drive and determination and took the fight to White early. However, White is a canny wrestler and was sucessfully able to slow the match down and wrestle at his own pace. Once Goto had had enough of White’s antics he came down to brawl on the outside, an error in most circumstances. Goto was brave, but for the first 10 minutes of the match, White was very much in control. However, White’s contempt for Goto had caused him to overlook the danger from a Goto that had a revitalised sense of purpose and the strikes, suplexes and attacks from Goto seemed to cause more damage than he anticipated. White desperately tried to swing the match in his favour. Jay White can end a match seemingly out of nowhere, but his efforts to do so were ultimately in vain and he fell to a GTR in the opening match of the B Block. 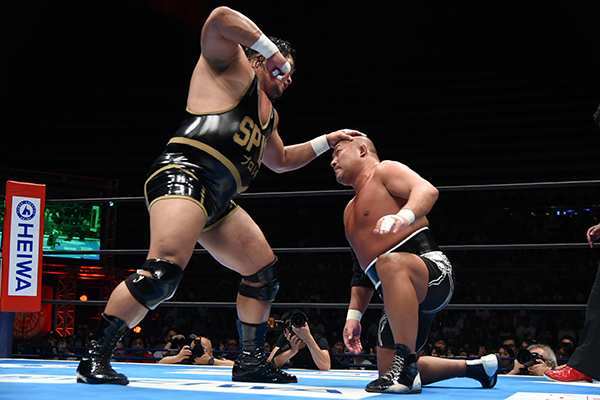 The match started in hard-hitting fashion as the two exchanged vicious shops while Ishii eventually getting the better of Cobb at the start. Cobb however, proved very resilient and at the 7-min mark was able to come back with a variety of powerful suplexes bringing him back into the match. Ishii was not to be outdone as he came back with a superplex only to be met with an echo from Cobb. The stone pit bull has always prided himself on being the toughest, strongest wrestler in the ring, but seemed to have met his match in Cobb. The match was the very definition of a heavyweight slug fest as the two went blow for blow, suplex for suplex and were able to earn the respect of one another. In the end it was Ishii whose arm was raised following a vertical-drop brain buster on Cobb, a huge feat of strength in itself. 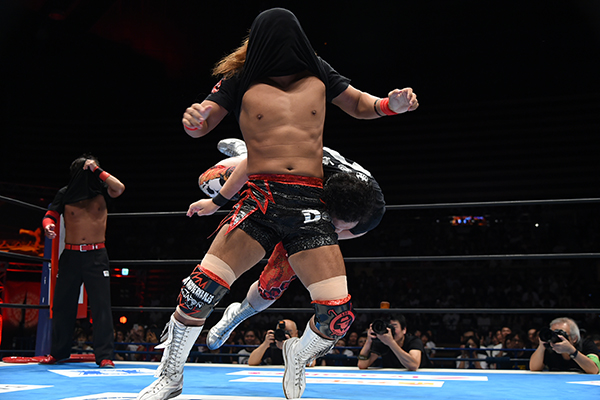 Naito tried playing psychological games by undressing slowing and refusing to take Yano seriously. Naito started playing Yano’s game, removing the turnbuckles and attempting roll-ups but it was a dangerous game to play as the sublime master thief was quickly able to turn the tables and steal the win, proving himself to be the master of such tactics. 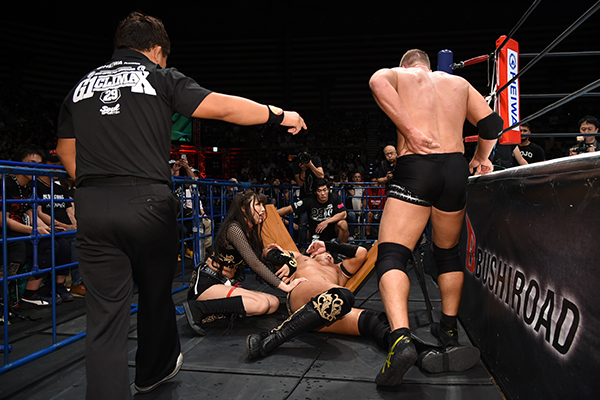 Taichi jumped Moxley as he made his way through the crowd in his entrance, and Moxley took serious damage before the bell even sounded. Moxley was almost counted out but managed to get back in the ring but having withstood the initial assault he was able to come back into the match. A now annoyed Jon Moxley put Taichi through a table in front of his tearful valet, Miho Abe and despite nearly losing to a Gedo clutch was able to emerge victorious. 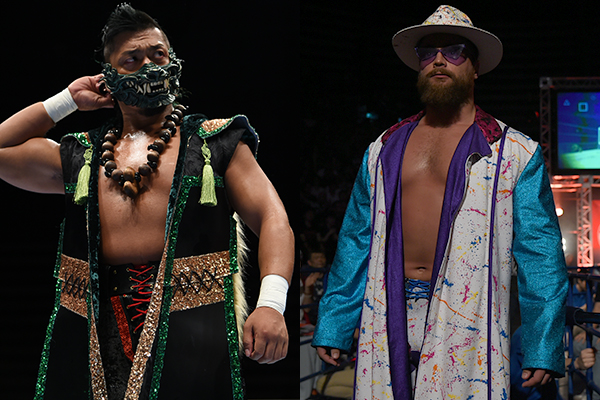 In the inaugural match of the B Block, a lot of questions were being raised ahead of the bell. What sort of Robinson would we be getting and could Takagi hold his own against a heavyweight in his prime? The answer satisfied everyone. Takagi got the upper hand early with him taking Robinson to the outside. Takagi’s move set seemed a lot more varied than the one he used in Best of The Super Jr. 26. In that tournament, he was the most powerful entrant, but the G1 is a different beast and he had to mix his power moves with submission holds, aerial moves and more. Still, he was able to knock down Robinson time and again. Robinson for his part was certainly no slouch executing a wonderful cross-body. When he executed his superplex from the top rope however, it seemed to take more out of him than he thought and Takagi was able to take advantage. From there, the match went into overdrive with bumping bombers meeting the left hand of God. Finally a pulp friction saw Juice emerge victorious. 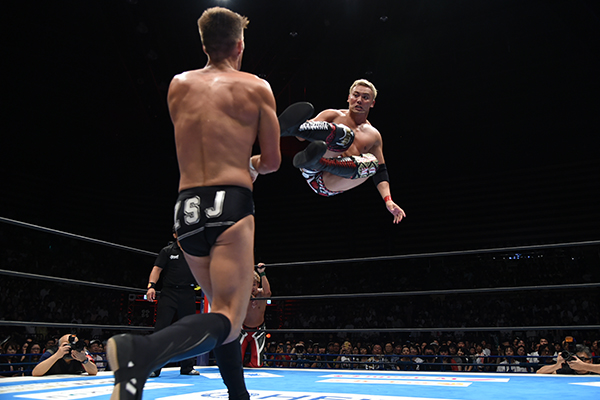 Sabre and Okada started the match, with Okada getting the better of the initial exchanges. Suzuki came in next to duel with YOSHI-HASHI and after taking some hard chops to the chest, Suzuki unloaded on him sending him to the outside. The two brawled on the outside, or rather Suzuki brutalised YOSHI-HASHI on the outside. Taking huge punishment, the headhunter didn’t give up and was able to withstand Suzuki. Zack and Okada clashed again but this time in Sabre’s favour and when YOSHI-HASHI came in to help out his partner, Suzuki pounced and was able to submit the head hunter. 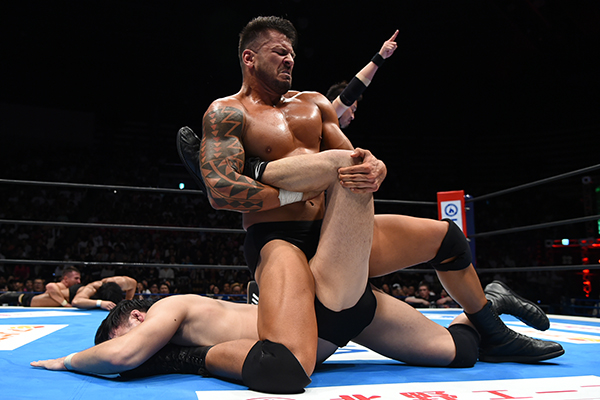 A lot of curious eyes were on this match as the LA dojo Young Lions made their Japan debut, squaring off against the flower of the Noge dojo class. Conners and Narita started the match showing great skill and Fredericks and Umino were next in the ring. Fredericks in particular showed skill and strength. Both of the LA dojo Young Lions were recognisably Young Lions but showed the influence from head coach, Katsuyori Shibata. The result was a clash of styles very similar to each other but also very unique. The match-up between KENTA and Tanahashi was a historic moment, as the two meeting in the ring saw a dream match fans had been waiting for almost 15 years to see. 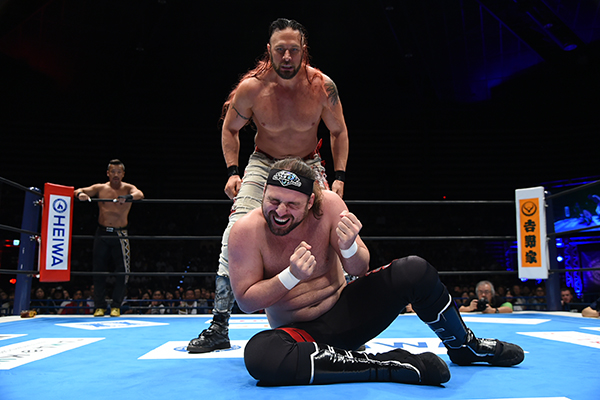 Both of the the G1 entrants in the match are known for making judicial use of assistance from their stablemates. Whilst Owens and Kanemaru were effective against each other, it was difficult for them to be effective against their respective larger opponents. In order to emphasise the point, Fale and Archer executed stereo choke-slams. Kanemaru showed excellent technical skill but Owens was able to execute his package pile driver for the win. 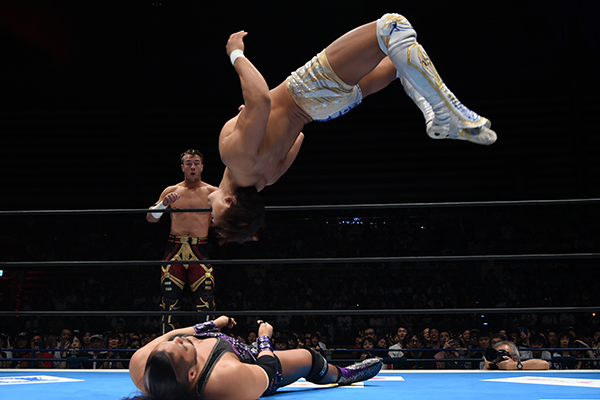 EVIL and Ibushi started in the ring with EVIL immediately going after Ibushi’s injured ankle. After EVIL invited his teammates to partake in the torture, Ospreay came into the ring to save his teammate. SANADA took the opportunity to scout his opponent before tomorrow’s match and the two showed great skill in the ring. Uemura’s inexperience in dealing with LIJ’s underhanded tactics proved his team’s downfall and BUSHI was able to get the win.