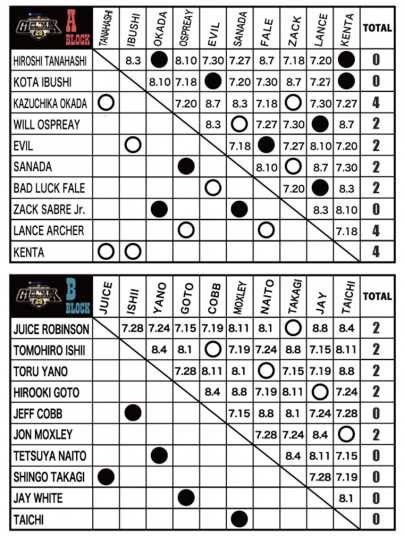 After an action packed first night in Ota, Tokyo, New Japan Pro-Wrestling returned for a second night as the wrestlers in A block took on their second opponents. For half of them it was a chance to extend their lead, for the other half, it was an opportunity to avenge their defeat in Dallas and get off the starting block. Whatever the outcome, you can be sure that the G1 competitors were just getting started. 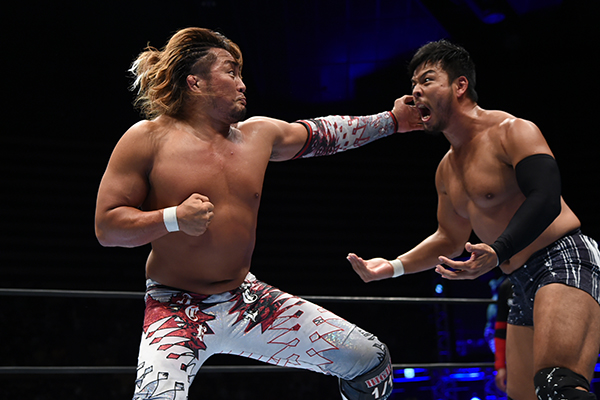 In a bitter grudge match two of the brightest stars in Japanese pro-wrestling over the last 15 years met for the first time in a New Japan ring. The strong-style of Hiroshi Tanahashi met the King’s Road of KENTA. KENTA was initially dominant with strong strikes and slaps. KENTA’s bitterness towards the man who had overshadowed him in Japan was expressed in the ferocity of the strikes. In turn, Tanahashi’s disgust at the man who had, in his mind, never lived-up to his full potential was expressed his his use of the vicious inverted-dragon screw, applying huge amounts of torque to KENTA’s striking knee. Eventually though, KENTA pulled through and ended the Ace’s ambitions to best his rival with a Go 2 sleep. 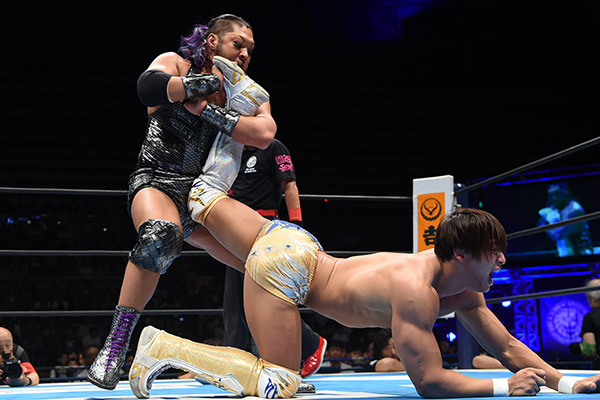 EVIL started the match by going for Ibushi’s injured ankle. Ibushi came back strong with drop-kicks and low kicks, but it was obvious that the injury was still affecting his ability to take the fight to EVIL. EVIL’s offense was strong, a combination of strikes and suplexes, but the Golden Star was able to counter with lariats and vicious strikes. EVIL was also able to deliver a super-plex on Ibushi but his incredible stamina allowed him to fight through it. Ibushi fought hard but in the end, EVIL was too much for him and he was able to carry his momentum through to a victory. 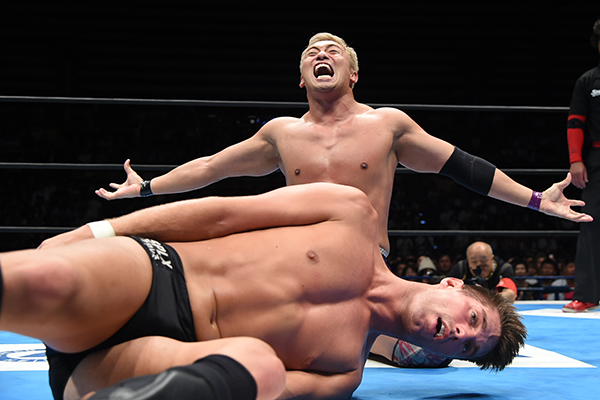 Sabre started the match by focusing on Okada’s left arm and used a variety of extremely inventive offense submission holds. Okada came back strong and delivered powerful strikes in an effort to overpower the British submission master, but Sabre is always keen to expose and exploit any and all opportunities offered to him by the Rainmaker. Modified stretch was transitioned into modified stretch and it almost seemed inevitable that Okada would have to tap out to avoid getting injured. However, Okada is not the champ for nothing and was eventually able to turn the tables through a tombstone pile driver, a spinning rainmaker and finally a regular rainmaker. 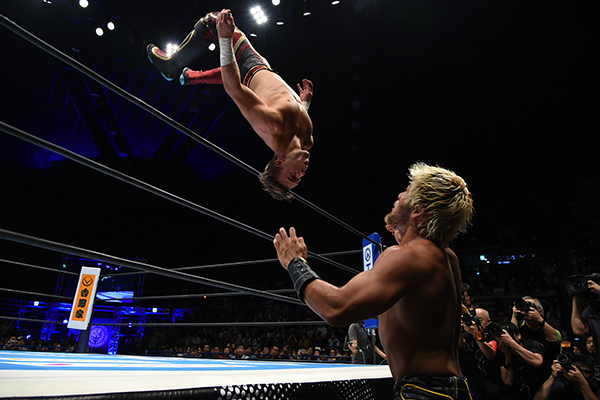 The match started in a technical fashion as Ospreay hoped to show his versatility by taking on SANADA in catch-wrestling. SANADA offered his hand to Ospreay in an apparent display of sportsmanship but Ospreay saw through the ruse. Ospreay failed to imitate SANADA’s paradise lock, but his opponent was happy to show him how it was done. Although Ospreay escaped from the first one, SANADA applied it on the ropes to greater sucess. From there the match went into high-gear and planchas from both sides came flying out and Ospreay got off a beautiful Sasuke special. A stormbreaker was countered into Skull End. A Lariat was countered into a Spanish Fly. In the end SANADA fell to the Stormbreaker. 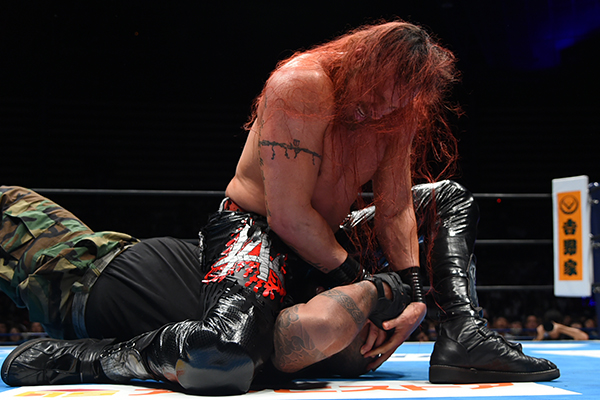 Archer went into the match seeking to prove that his victory over Will Ospreay in Dallas was no fluke and started with a Tope con Giro to Fale. However, throughout the match, whenever Archer was looking doominant, Jado would be there to prove a distraction and allow Fale to gain the upper hand. After a good deal of brawling both inside and outside the ring, Fale performed a super-plex on the giant Texan whilst Archer was almost able to pull-off his black out finishing move. In the end Archer proved sucessful through his pinning variation on the EBD claw. 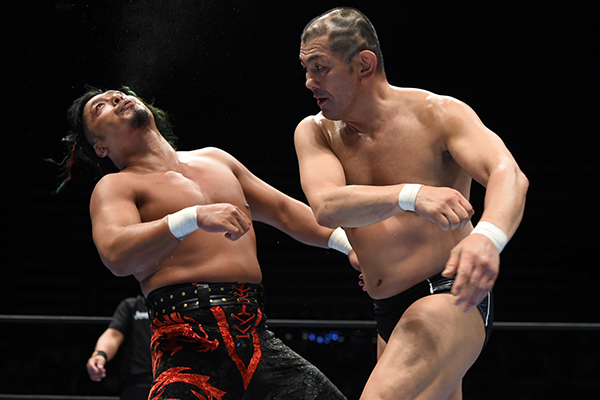 Suzuki-gun started the match by rushing every opponent except Naito who squared off against Taichi. Suzuki-gun were unrelenting in this match, torturing Tetsuya Naito both inside and outside of the ring. There was some hot action between Takagi and Kanemaru, in which Kanemaru impressed with his ruthless energy. Although L.I.J got some good offense in, the match was a largely one-sided affair with Suzuki ending the match with a Gotch-style piledriver on BUSHI. 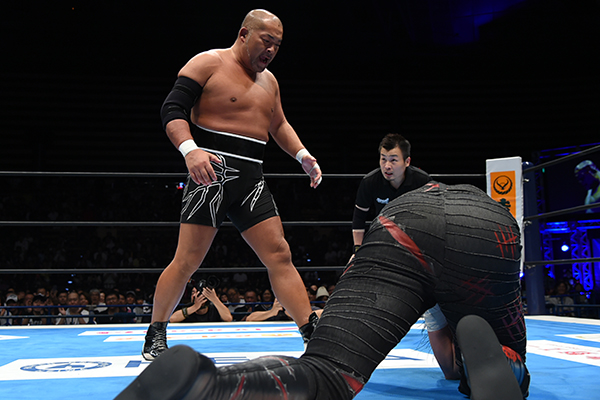 White once again started the match by sliding to the outside. When Chaos attempted to grab an advantage by using outside influence from Yano, BULLET CLUB took this as carte blanche to do as they liked. They brawled with Chaos both inside and outside the ring with Owens and Takahashi showing good teamwork. White squared off against Ishii in the ring and when Ishii proved to much for him White tried to escape only to be stopped by Yano who returned him to the ring by force. Yano rolled-up Owens to win. 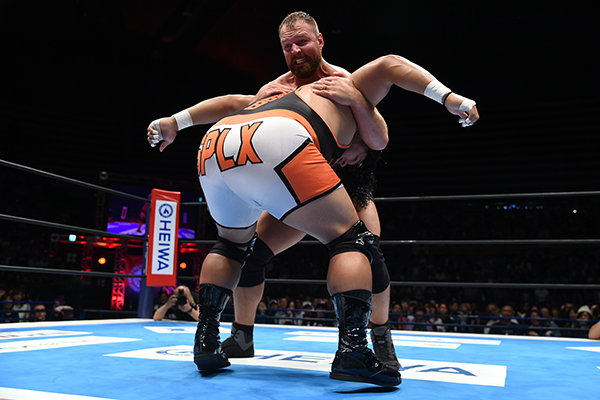 The match started hot with a drop kick from Narita on Umino. Moxley came in to assist and Umino and he unvieled some exciting new tag team moves. Cobb came in to spar with Moxley and the match was very hot with a focus on grappling. However once Cobb was in the ring, he was able to leverage his experience over Umino and pinned him after a tour of the islands. 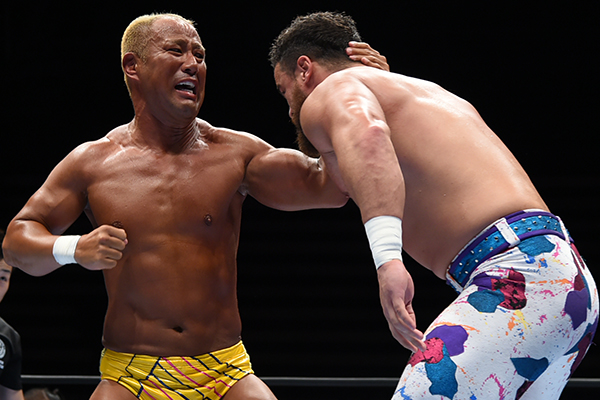 Tsuji and Uemura started the match with Tsuji emerging on top. Honma came in and whilst he was strong in his initial sparring with Henare, when Robinson came in he looked very strong. Goto and Robinson sparred very briefly however it was Henare who got the win over Uemura with a Toa Bottom.